Flush-strated: Disposable wipes may be convenient, until you consider sewer system maintenance 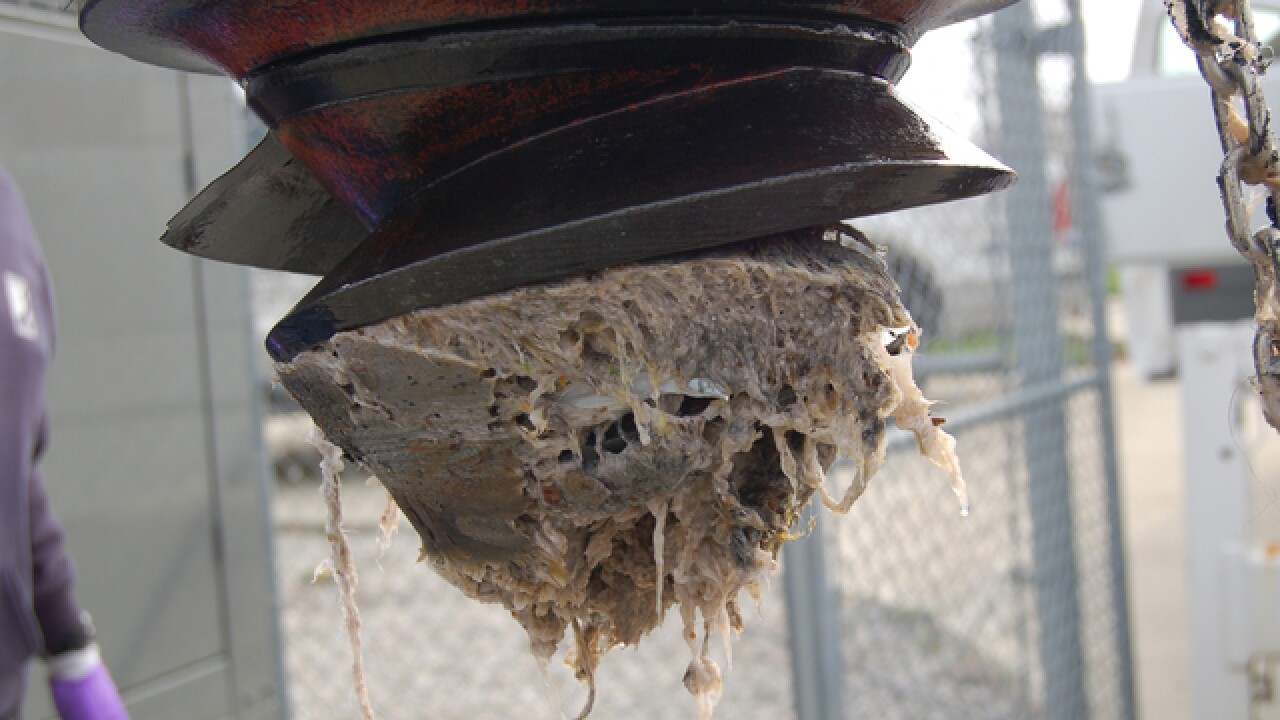 Copyright 2017 Scripps Media, Inc. All rights reserved. This material may not be published, broadcast, rewritten, or redistributed.
<p>This is what wipes and other fibrous materials flushed down a toilet look like when they accumulate on pumps inside the sewer system of the Metropolitan Sewer District of Greater Cincinnati. (Photo provided)</p>

Great for wiping a baby’s bottom. Great for quick cleanups between showers. So handy, so convenient and such a time-saver.

But what happens to them when they’re flushed down the toilet, as they too often are?

If they’re designed to be flushable, and they break apart in water, all is well. But if not, they wind up intact in your local sewer system, where they can clog pumps, or get flushed out into local creeks during a heavy rain.

“Flushable wipes are a growing issue in the wastewater industry,” said Valerie Forsyth, communications specialist for SD1 , the sewer system for Boone, Kenton and Campbell counties in Kentucky.

When wipes get into a pump station, they can disrupt the system that turns pumps on and off, she said. They can also cause pumps to clog and fault. When that happens, the pumps have to be cleared manually, which increases costs.

Wipes and other fiber products can bind together with grease in the wastewater to create large clumps, said Scott Maring, a principal engineer for the Metropolitan Sewer District of Greater Cincinnati . In the wastewater industry, these clumps are commonly called “fatbergs.”

To keep fatbergs from sinking the local sewer system, every other week MSD crews check a handful of pump stations and clean out any debris. Sometimes they’re clear, but other times, there’s enough material to fill a 5-gallon bucket, Maring said.

The process of lifting the pumps for cleaning, replacing them and opening check valves for cleaning adds about six hours a week to MSD’s workload, he said.

Fatbergs used to be an issue at more of MSD’s nearly 100 pump stations, Maring said, but a decade ago, when wipes started to became a problem, MSD worked with pump manufacturers to fix it. MSD began fitting pumps with sharper impeller blades, Maring said, which chop wipes into smaller pieces.

Subject to city approval, Nehemiah Manufacturing plans to invest $12 million at the site and hopes to open its new facility by the end of 2017, company president Richard Palmer said.

Nehemiah makes two lines of disposable wipes: Boogie Wipes for runny noses and Kandoo wipes, intended for use by children who are potty training.

Boogie wipes aren’t intended to be flushed, Palmer said, but Kandoo wipes are made of material that’s designed to break apart after flushing. Palmer said they meet the standards for flushability set by INDA, the Association of the Nonwoven Fabrics Industry , a Cary, North Carolina-based trade organization.

INDA’s standards call for a wipe to meet seven tests before it can be labeled “flushable,” including whether the product is designed for or commonly used in a bathroom setting. If it fails any of the tests, it must be labeled “Do not flush.”

Adherence to those standards is voluntary, however, as there are no government regulations on flushability of products. INDA President David Rousse said he believes that INDA members do follow them because they want to do the right thing -- and protect their brands.

Products not designed to be flushable, particularly baby wipes, are the ones causing problems for sewer systems, not wipes designed to be flushed, Rousse said. The former are marketed with instructions not to flush them, he said, but too many get flushed anyway.

However, at at least one lawsuit has been filed over wipes that were claimed to be flushable, but allegedly were not. ABC News reported in 2014 that a New York doctor had filed a class-action lawsuit against wipes makers over what he called “major plumbing and clogging issues in his home.”

Rousse expects that within the next few weeks, the INDA will unveil new and improved flushability standards, created in conjunction with wastewater treatment groups such as the American Public Works Association. They will include use of a “Do not flush” symbol and a recommendation that manufacturers print it at the “point of wipe extraction” from the package, he said.

Rousse thinks consumers can be trained to flush only flushable products, he said, because they also want to do the right thing -- if it’s not too inconvenient. “A similar situation existed when we tried to get people to put plastic bottles into recycling bins,” he said.

The nonwoven fabrics industry in the United States has been growing about 5 percent a year, Rousse said. The consumer wipes segment had an estimated $7.5 billion in sales to U.S. consumers in 2016, he said, with about $530 million for wipes designed for “toileting” use.

As the market grows, so does the call for legislation. The Washington Post reported in December that the District of Columbia’s city council approved new legislation to make wipes marketed as “flushable” abide by standards that the city and its sewer agency would set for how quickly they break apart after a flush.

The Post reported that if the mayor signs the legislation, Washington, D.C., would become the first city in the nation to regulate the definition of flushable.