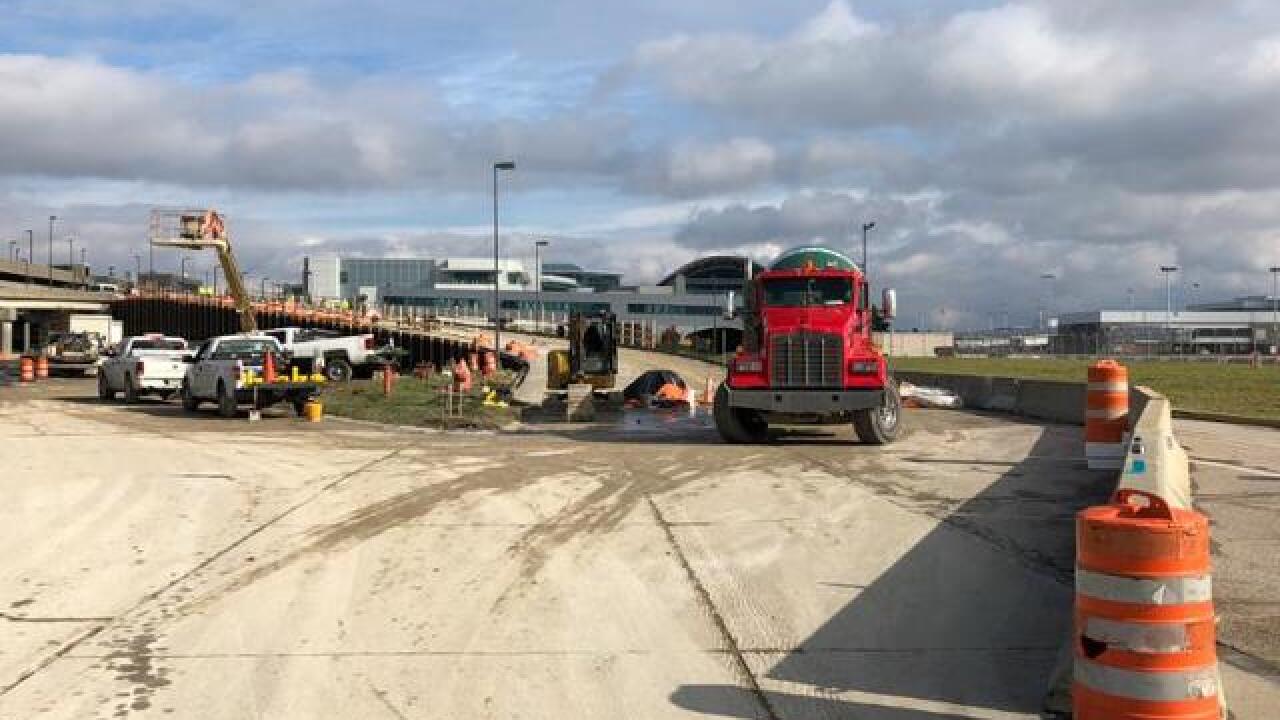 Copyright 2018 Scripps Media, Inc. All rights reserved. This material may not be published, broadcast, rewritten, or redistributed.
Liz Engel | WCPO contributor
<p>Construction crews are building a new, temporary ramp to CVG's main terminal for arrivals and departures. It should open late November. </p>

HEBRON, Ky. -- The Cincinnati/Northern Kentucky International Airport is gearing up for its busy season. And while officials expect an influx of holiday travelers this year, they're also issuing a heads up for those soon to be airport bound.

Several road construction projects could confuse even the most experienced frequent flyers. Orange barrels have been a mainstay around the airport's main terminal and parking garage since August, but activity has picked up in recent weeks.

And, since officials are anticipating an increase in activity during this Thanksgiving and Christmas break -- nearly 35,000 more passengers than in 2017, to be exact -- they are urging everyone to tack on a few extra minutes to their commute.

"We haven't changed the front entrance to the terminal in 30 years," said CVG spokeswoman Mindy Kershner. "Some people come to the airport, and they're on autopilot. They know where they're going. Others get frazzled or anxious the second they pull onto airport property. Either way, we want people to be aware. Slow down, pay attention to way-finding (signage). There is some change happening."

In short: expect lane closures and traffic shifts. Among the most notable, there's a new entrance to the airport hotel and terminal parking garage -- it now requires a sharp left turn from the main drag. And there's traffic flow changes on the arrival/pick-up and departure/drop-off ramps.

Crews partially demolished the terminal garage to make way for a new entrance road. The airport will eventually eliminate the wide, sweeping loop that exists today.

And, this past summer, the airport opened a new, upgraded exit plaza to the terminal garage. CVG also relocated the rideshare pickup area. Those hailing an Uber or Lyft can now find their car in a lot adjacent to the hotel shuttles.

"They (Uber and Lyft) were picking up (passengers) at baggage claim. But because we're growing so fast, we wanted to pull that traffic off the curb," Kershner said. "It's just a nicer experience for everybody."

All the road changes will allow for more direct airport access, Kershner said. CVG expects to debut its new main entrance in late 2019. But the construction is also part of a planned CONRAC, or consolidated rental car facility. A one-stop shop for rental car operations, it's scheduled to open in the fourth quarter of 2021. CVG anticipates the overall project will cost $165 million.

While the construction has drummed up the most noise, passenger volumes have been a constant cause for celebration all year. CVG is considered the fastest-growing airport in the country. In May, June and July, it set new all-time records for local passengers served.

This year's holiday season -- traditionally CVG's busiest time of year -- is no different.

For Thanksgiving, Kershner expects that 162,000 passengers, both inbound and outbound, will travel through during a seven-day span starting the Tuesday before Turkey Day. That's a nearly 8 percent increase over 2017.

She expects a similar increase around Christmastime. Around 225,000 passengers, inbound and outbound, are expected at CVG from Dec. 21 to Dec. 30. That's an 11 percent increase over 2017.