Eight-ton hunks of history are on the move 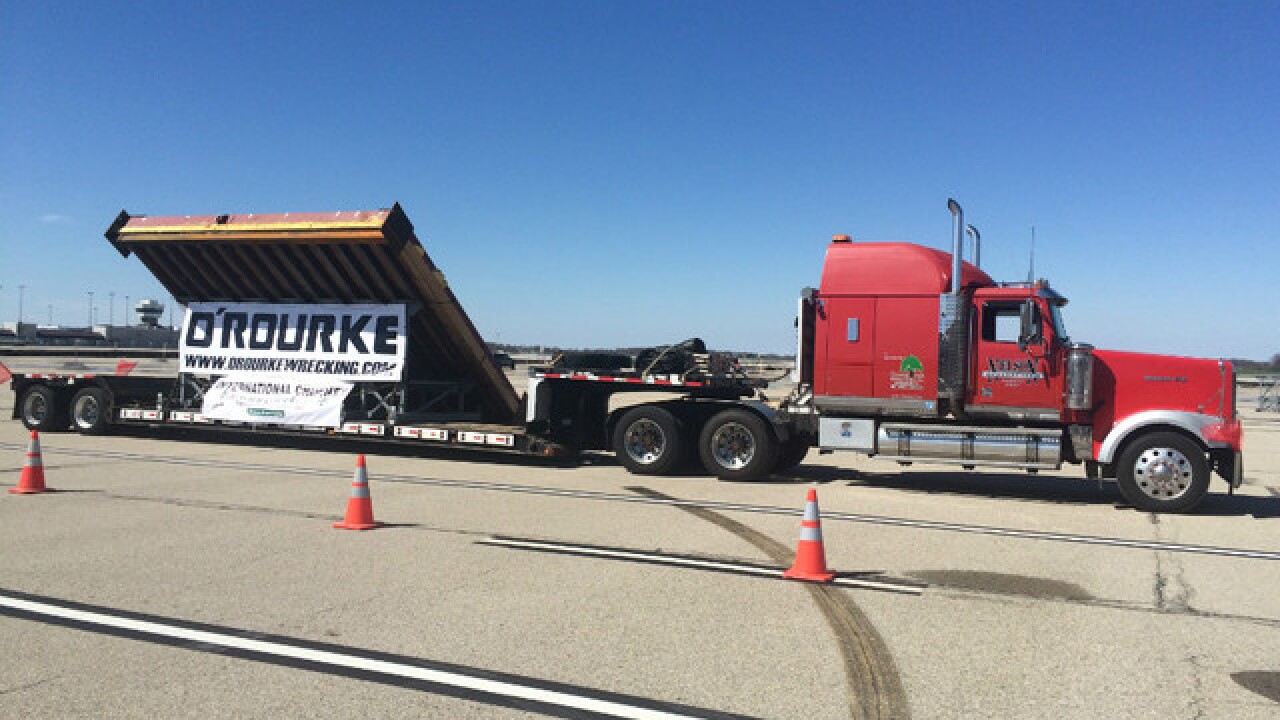 HEBRON, Ky. – Eight-ton hunks of history are on the move.

The first three of nine massive murals originally housed at a train concourse at Union Terminal are being transported Saturday from the Cincinnati/Northern Kentucky International Airport to their new home across the river.

The murals, now packed and crated behind equally weighty steel reinforcement, will be transported starting at 6 a.m. Saturday to the Duke Energy Convention Center Downtown.

It will be an understandably tedious process – each mural, which measures 20-by-20-feet and weighs approximately 8 tons – will take about two hours to move; Central Avenue, between Fifth and Sixth streets Downtown, will be closed from 6 a.m. until roughly 8 p.m. to make way.

O'Rourke Wrecking Company, which was awarded the nearly $2 million contract by CVG to remove and transport the murals to Cincinnati, started prep work about three months ago, designing the steel reinforcement needed to shore the pieces and packaging used to protect them. Total transport weight is 16 tons.

"Given the width and the height of the murals, that's the toughest part of transporting from here to there," said Jeff Sizemore, O'Rourke project manager. "We had to tilt them over to get them low enough to go under the bridges and utility lines.

Artist Winold Reiss created 14 massive glass-tile mosaics for Union Terminal in 1933. The images depict laborers inside prominent Cincinnati manufacturing companies, including Procter & Gamble, Baldwin Piano and Crosley Broadcasting. Nine pieces of the artwork were moved to the airport in 1973, a year before the terminal's train concourse was razed.

But now CVG is clearing house, too. The murals have been housed in the old Terminal 1 and 2 buildings, which have been closed to airport traffic for years. Those buildings are currently being demolished to make way for a new Consolidated Rental Car Facility.

One option included moving the mural to a long-term storage location in a Delta Air Lines cargo building. But, in December, Cincinnati City Council voted to front $750,000 for their installation at the Duke Energy Convention Center. The monies will be paid back from Hamilton County's hotel/motel tax over a period of five years.

"Just the history of the companies and industries (these murals) represent is amazing," Sizemore said. "I grew up in Cincinnati and have lived here my whole life. As a passenger in and out of the airport, I'd seen them numerous times, so I had some familiarity. But I have learned a tremendous amount about the history since. All the different types of industries it represents in Cincinnati are still alive and well today."

The murals will be mounted on an exterior wall of the Duke building – behind protective glass – along Central Avenue. City officials said they are working with architects, engineers and art conservators to create the secure and protective display. City staffers will monitor the intensity and the spectrum of light entering the enclosure to adjust levels of protection once the final enclosure is completed, and also will monitor humidity and temperature levels.

In all, it will take a few months to ready the murals for public viewing. The remaining six murals will be moved in subsequent weeks during the month of April and May.

The City of Cincinnati will hold a dedication ceremony once all nine are in place. Spokesman Rocky Merz said that event will likely take place sometime this summer.

“I’m excited that these important pieces of artwork will once again be on public display for everyone to see and enjoy,” Mayor John Cranley said in a statement.

CVG officials, meanwhile, said demolition of Terminals 1 and 2 will be complete by the fourth quarter of 2016. The CONRAC will be operational in 2021.

“We are proud to partner with the City of Cincinnati to bring nine of the 14 murals back to Downtown,” Candace McGraw, chief executive officer at CVG, said. “We are also excited to be building a new home for the rental car companies next to the main terminal. This not only promises greater convenience for customers, it reduces operating cost and will provide a big reduction in emissions from shuttles having to transport customers to the rental car lot.”