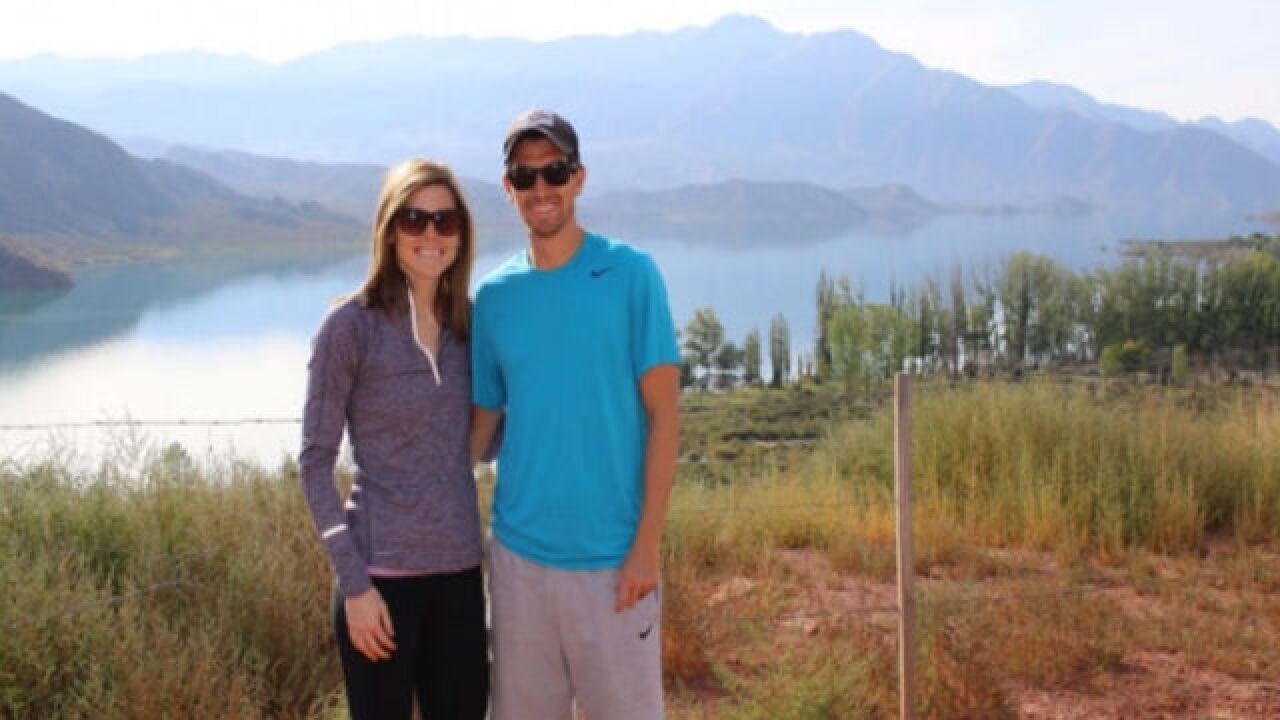 <p>Cincinnati expatriates Lauren and Matt Kaminsky are pictured at the Portillo Dam, near the Chile/Argentina border. Photo provided</p>

CINCINNATI -- In February, Matt and Lauren Kaminsky moved from Cincinnati to Santiago, Chile, where they live less than an hour from both the Andes Mountains and the Pacific Ocean.

Although they’re surrounded by great beauty, they miss their friends and family 5,000 miles away. So it’s a great comfort that they can live stream worship services from Crossroads, their former church in Cincinnati.

Now, they’re trained to become small group leaders for Crossroads and are even recruiting other expatriate Americans to join them in weekly small group experiences, including watching the services.

Matt Welty likes to tell stories like the Kaminskys'. He’s the campus pastor for Crossroads Anywhere, overseeing the church’s extensive digital presence, which the church considers its seventh virtual campus.

Over the three-year period that started at the end of its capital campaign last fall, Crossroads, the area’s largest and fastest growing church, plans to spend about $18 million on Crossroads Anywhere, Welty said. That will mainly pay for upgrades to its website and its mobile app.

That spending will support an ambitious goal: The church hopes to have 30,000 people in small groups such as the Kaminskys' by next year, Welty said.

“In a culture in which the traditional model of church is becoming less relevant, finding ways for people to grow spiritually and interact with God is probably going to be a path forward for the church,” Welty said. “I get excited that there are many people who would not ever walk into a church building, but who would download and app. I’m excited that church is no longer limited to a building.”

Crossroads began broadcasting its weekend services online in November. About 5,000 people now view a service online every weekend, Welty said, with about half of them living more than 25 miles from a Crossroads campus.

Many are former Crossroads members who’ve moved to other cities, he said, like the Kaminskys, and like Dave and Tracey Beckman, who moved to Columbus from Cincinnati in 2013.

They had served on the team that started the church’s Mason campus, Dave Beckman said, and felt a real passion for the church. They struggled to find a similar place of worship in Columbus, as well as new friends.

Just as they were about to give up and settle on a Columbus church, the live streamed services from Crossroads became available. In June, they sent invitations for people to join them in watching the Saturday evening service at their home.

The group now averages about 10 attendees, who come for food, fellowship and prayer.

People are now comfortable singing along with the worship music and attendees are starting to help each other outside of Saturday evenings, by doing things like providing food and temporary shelter for those who need it.

The Beckmans are wondering now what they can do to make the group more kid-friendly, Dave Beckman said, so it can accommodate young adults with children.

“This is church for us now,” he said.

He believes groups like this will spring up all over the country and “be a great resource for people growing spiritually and relationally.”

To help boost the number of small group attendees, last month Welty’s team of IT staff and contractors launched a new tool on the website that enables searches of existing groups and facilitates their creation.

The tool can be used to find groups with similar interests, not all of them traditionally associated with churches.
For example, using the search term “beer” yields dozens of groups, including Denver Crossroads, based in Denver, Colorado, started by a couple that moved there a year ago from Cincinnati.

The description posted on the website includes this invitation: “If you’re just curious about God or want to dive deeper from where you are … the water is warm and the beer is cold.”

And it would be a sin not to mention “Fart & Scratch,” a Bible study for -- surprise -- men only.

Since the groups tool launched, 1,352 groups have been created, with 5,674 people joining them, Welty said.

Before last month, Crossroads had created temporary small groups for special events such as month-long Bible studies, Welty said, but not permanent groups.

The groups tool is a way Crossroads can help make connections among people who have common interests, Welty said.

The other major part of Crossroads Anywhere -- the app -- is due for upgrades in October and January.

The updated app will provide devotionals tailored to the individual, based on his or her usage history, according to Welty. For example, if someone uses lots of material on gratitude, the app  would provide more of that.

“We’re starting to get into the same levels of innovation and personalized content delivery that we see in the marketplace,” Welty said.