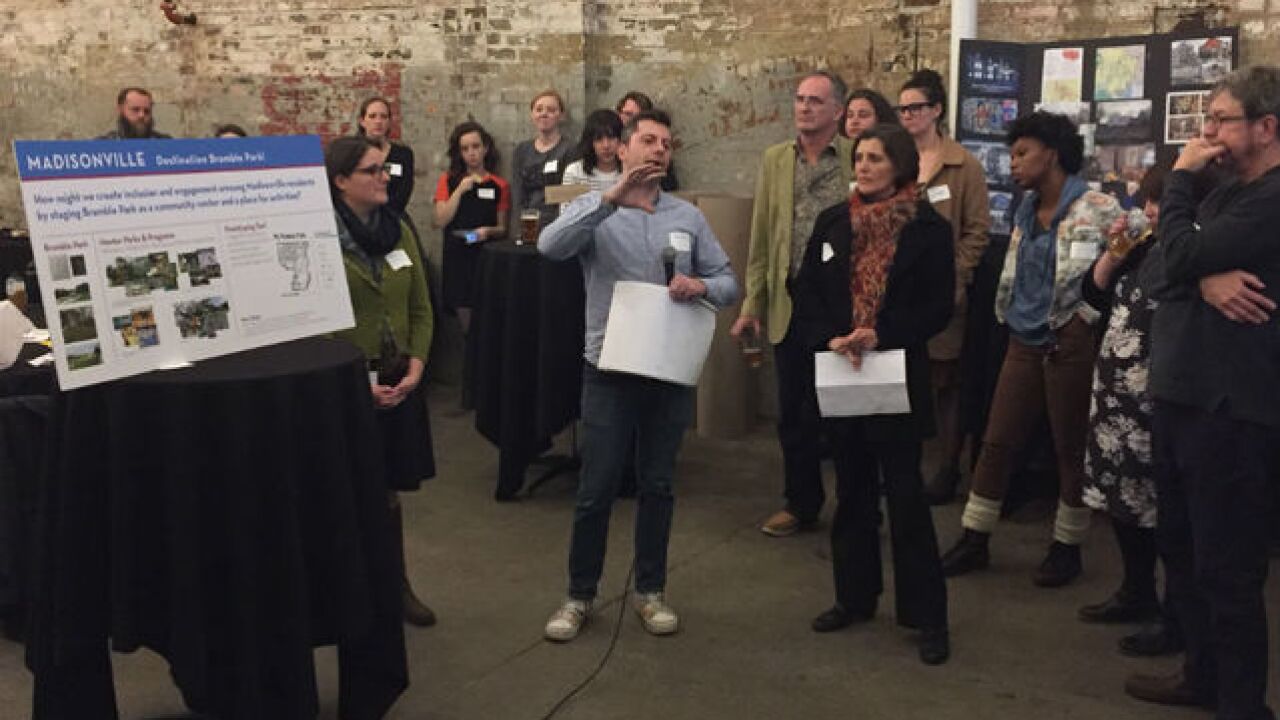 CINCINNATI -- Artists and community organizations are coming together to help their neighborhoods.

Since August, dozens of community and arts organizations and individual artists have met to identify issues and possible solutions to them in five neighborhoods across Greater Cincinnati: Covington, Madisonville, Price Hill, Walnut Hills and West End. The creative placemaking network unveiled its ideas Dec. 7.

A $35,000 grant from the National Endowment of the Arts, matched by ArtsWave and Local Initiatives Support Corporation of Greater Cincinnati and Northern Kentucky, made the creative placemaking network possible. The money covered the cost of Design Impact leading participants through the process, which included community surveys and interviews with residents.

“Our neighborhoods benefit tremendously from having all of you together, sharing great ideas,” said Kristen Baker, senior program officer of LISC, “and from you being intentional about sharing and learning from each other.”

The program also includes $4,000 for each neighborhood group to put its ideas into action.

Each team will receive two additional hours of coaching from Design Impact over the winter. ArtsWave and LISC will convene the groups again in March to review their progress and work.

“One of the things we learned is this isn't a thing that has a stopping point,” said Tara Townsend, chief impact officer at ArtsWave.

The issue: The Center for Great Neighborhoods is trying to build the Hellmann Creative Center, a re-purposed saw mill, into a community hub and a place that connects the diverse residents of Covington.

The idea: Use art to make a parking lot outside Hellmann Creative Center into an engaging community space that draws people into and makes them comfortable at the center.

Next steps: Dutton and Rivera are creating sculptures that reflect the community, asking people, “Where are your roots?” The sculptures will use an actual root -- you can see it now at the Hellmann Creative Center -- as well as pieces of sawmill machinery. Eventually, a second sculpture will be created at Pyramid Hill, the Hamilton sculpture garden and museum, which also will hopes to provide other installations on a rotating basis for the parking plaza.

The artists also are working in the lobby of the Hellmann Creative Center. They help direct visitors and also invite people to share their stories of their roots to be included in the sculptures.

The issue: Madisonville is losing open space to development, but has the under-utilized Bramble Park. When the group talked to community residents, most said they never go to the park.

The idea: Build community pride and sense of place by encouraging use of Bramble Park as a community center.

Next steps: The group wants to get people interested in the park and vested in its potential as not only a community center but a potential destination in the region. The Little Duck Creek Trail could connect here with Wasson Way. They are distributing a coloring sheet, “My Bramble Park,” that allows anyone to become a “park-itect” and share their ideas for a perfect park with the redevelopment corporation.

The issue: The community is full of deteriorating housing stock and low-income families in need of safe, secure homes.

The idea: Working within Price Hill Will's existing homesteading program, which allows low-income families to earn ownership of property through a five-year land contract that requires work on the home, the group wants to pair artists with homeowners to create art installations on their house. The art will help build personal and community pride in the neighborhood. It also will promote the homesteading program that started this year with two houses and has a waiting list of eight families.

“You can't have a good home visit if you don't have families in safe homes,” said Ryan Mulligan of Cradle Cincinnati.

Next steps: The group will reach out to the two homesteading families to see if one is interested in having an art installation on their house. Once a family is picked, ArtWorks will connect an artist to the project and recruit workers from the neighborhood.

The issue: Walnut Hills, experiencing population growth and redevelopment, has a neighborhood school, Frederick Douglass Elementary, with a poor reputation that isn't seen as a viable educational option by many in the community. In some cases, newcomers don't even realize the school is there, said Kevin Wright, executive director of the Walnut Hills Redevelopment Foundation.

The idea: By creating a series of family-friendly events near the school's campus, raise awareness of and comfort with the elementary school. Regardless of families' school choices, the elementary can be a community hub.

Next steps: The redevelopment foundation is working with Cincinnati Public Schools to determine where and how events might be set up. They also will talk with community residents to determine what types of events might be wanted -- ideas include movie and craft nights, theater and dance performances and basketball tournaments -- and hope to start events in the spring.

“Art and dance are like a glue,” said Aprina Johnson of the redevelopment foundation. “It's a way to meet people without feeling intimidated.”

The issue: This neighborhood, which includes about 6,000 people, is divided by Interstate 75 and lacks a cohesive sense of community and place.

The idea: With resident input, create consistent and wanted events to build relationships and connections across the community.

“The thing about underserved communities is that they're often given things and it's not always what they want,” said Paula Sherman of the YMCA. “And then, people just don't show up.”

Next steps: In a variety of places, including possibly a pop-up ice cream social this spring, the group will give West End residents of all ages a chance to vote for the kinds of events they'd like to see in their community. A variety of arts organizations, including the museum center, CSO and Cincinnati Shakespeare Company, have pledged to help provide programming after the community votes are tallied.