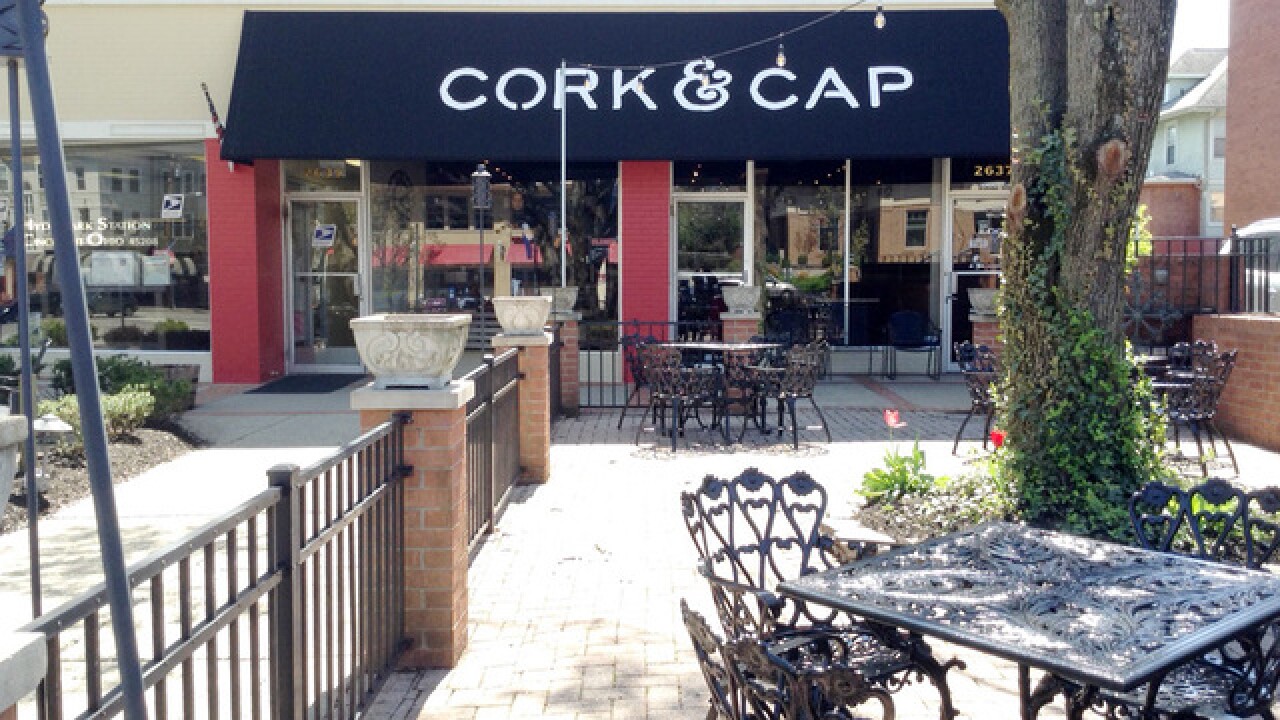 <p>Cork & Cap, in the Hyde Park Square space previously occupied by J-Bar and Indigo, hopes both to benefit by and reinforce the walkable, urban feel of the neighborhood. (Thomas Consolo for WCPO)</p>

CINCINNATI -- The latest tenets of urban planning urge cities to reclaim walkability in their neighborhoods.

That’s a quality that doesn’t need to be reclaimed in some corners of Cincinnati where it never went out of style. A prime example is Hyde Park, where a unique array of stores and businesses is clustered around Hyde Park Square.

New housing developments like 2770 Observatory and Michigan Terrace bank on the appeal of that urban lifestyle to attract residents. Now a new wine bar and restaurant hopes to add to the square’s vibe with its casual, homey feel and what its general manager says is a value-priced menu — good quality for affordable prices.

Cork & Cap has taken over the space at 2637 Erie Ave. previously occupied by J-Bar and, before that, Indigo. It opened April 6 and is so far open just evenings.

That will change over the coming weeks, said general manager Kenny Huff. Lunches will be added first and eventually a Sunday brunch. “We’re going to do it at our pace,” he said.

Huff’s goal is to create a place with a neighborhood feel, he said, where residents feel comfortable heading after work or while on an afternoon stroll. The space has been redecorated with peaceful colors on the walls, a copper bar and tabletops, and rich wood furniture and flooring. There are the requisite large-screen TVs over the bar and on the dining room’s south wall, but Huff said not to expect them to be blaring nonstop.

In warm weather, Cork & Cap will become even more woven into the vitality of the street thanks to its large outdoor patio. With room for up to 50 people, the patio nearly doubles the bar’s indoor capacity of 52. “It’ll be dog friendly, too,” Huff said.

He said he wants people walking by to feel comfortable just sitting down, having a glass of wine and a bite to eat, and enjoying the square. Maybe a friend or acquaintance will pass by and join in. It’s all part of Huff’s vision for Cork & Cap to serve as a social hub for the neighborhood.

The wine and food menus, too, are designed for a relaxed experience. Wines are grouped by their flavor profile, not by varietal. That serves two purposes, Huff said: It avoids some of the intimidation associated with choosing wines, and it will help patrons pair their food and wine choices. Those contemplating a meatball or barbecue chicken plate, for example, could choose from red wines with strong earth, herb or smoke profiles.

Huff said Cork & Cap’s wines are affordable. Most by-the-glass selections are less than $10, and almost all of the bottles are less than $50. Many are less than $40. Eventually, Huff said, he will add a Captain’s List — bottles priced between $100 and $250 for those seeking something special — but he said the establishment’s focus will remain on the affordable end of the spectrum.

The wine list, more than four dozen strong, will rotate periodically as Huff finds vintages he likes. There will be seasonal specials, too, like a rosé grab-bag for the coming warm weather: pay around $20 and get whatever bottle comes out. If that sounds like a grown-up version of the college-bar standard pull-and-pray, it is.

“The principle is the same,” he said, laughing, “but we can do it with higher quality.” In this case, he also wants people to learn that rosés are under-appreciated.

“A dry rosé on a summer day is a great thing. It’s not just white zinfandel.”

For those who prefer fermented grain to grape, Huff will have eight rotating craft beers on tap. The majority of those will be local, he said, including beers from Taft’s Ale House.

While a craft cocktail menu isn’t likely, there is a full bar, and Huff plans to make limoncello and orangecello in-house.

With all the thought going into drinks, Huff emphasized that food is no afterthought. “We want to have the best food in Hyde Park,” he said.

Chef Sean Gilliam has assembled a small but varied menu of small plates, sandwiches, grilled pizza and charcuterie. (Gilliam handled charcuterie for Dutch’s, the longtime purveyor of artisanal food and beverages based farther down Erie Avenue.) The dishes are straightforward but with fresh, high-quality ingredients. Sausages will soon be smoked in-house, for example.

One change already in store after the first weeks of operation is the elimination of entrees from the permanent menu. “Nobody ordered them,” Huff said. “They wanted the small plates.”

Paring down the menu also helps Huff and Gilliam keep costs — theirs and customers’ — down. While some places use high prices on either food or wine to subsidize the other facet of the business, Huff said, “We want all sectors making a profit. We’re not putting all our eggs in one basket.”

It also gives Gilliam the flexibility to experiment with creative specials. “He loves it this way,” Huff said.

Because Cork & Cap has a retail license, too, Huff said, people who like what they find at the bar can take a bottle home with them — at $10 a bottle less than the in-house price across the board.

Huff has been in the business for more than 30 years, much of that at high-end Italian restaurants Nicola’s and Via Vite. He said the process for getting Cork & Cap running was unusual because the backers knew basically the concept they wanted, brought him aboard to make it happen and trusted him to handle the details. Huff declined to name the backers, but published reports have identified Abed Keis, who owns a Norwood accounting firm, as leading the investors.

Huff said the idea for Cork & Cap is a tribute to Mark Maher, who died New Year’s Day at age 57. Maher, the founder and chief executive of Cutting Edge Selections, saw his fine wine-distribution business grow from a single van that Maher drove around town to supplying most of the Tri-State’s high-end restaurants. He was credited in particular with discovering and selling fine wines from Spain and Oregon ahead of the rest of the market. His passion for wine was an inspiration to Huff.