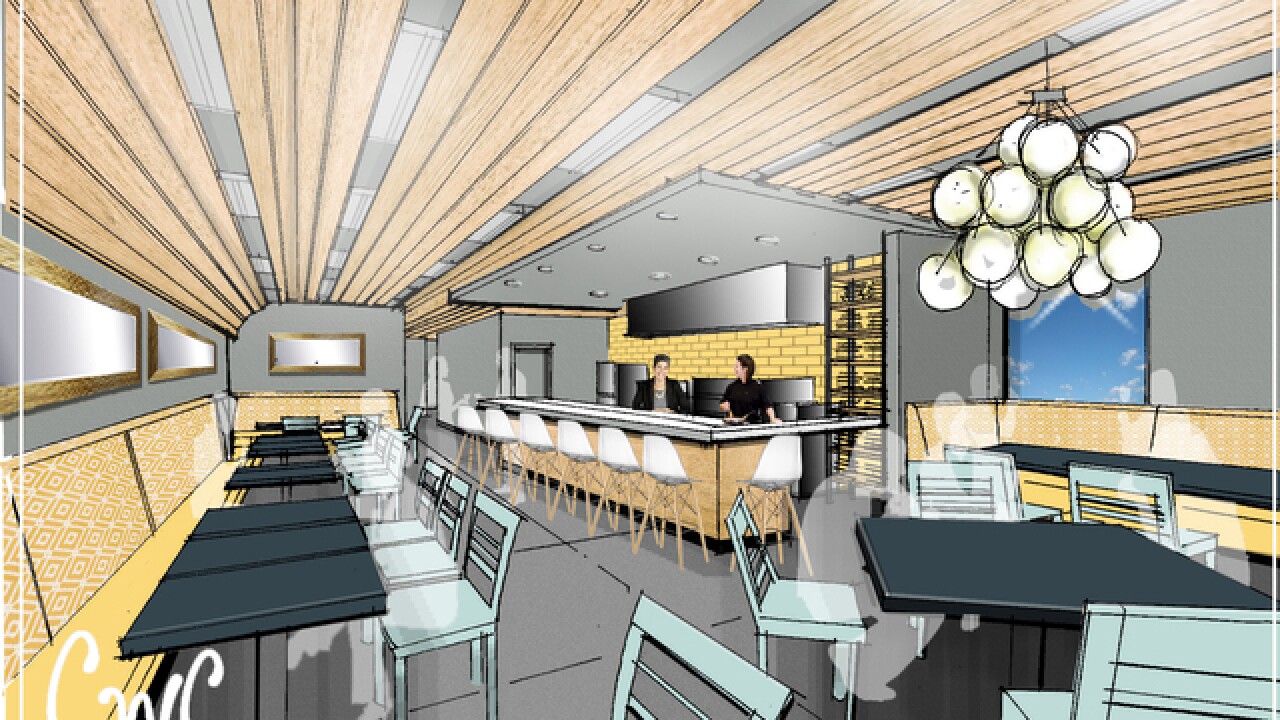 Copyright 2017 Scripps Media, Inc. All rights reserved. This material may not be published, broadcast, rewritten, or redistributed.
Provided
<p>An artist's rendering of the new CWC restaurant in Wyoming. (Photo provided by CWC.)</p>

CINCINNATI -- It's been a long time coming, but the sister act behind Cooking with Caitlin is taking its food enterprise to the next level.

The pair will soon open their own restaurant in Wyoming, aptly named CWC, at 4 p.m. March 3. Kelly MacEachen Trush, the self-professed "spirit-spattered voice" of the pair, likened this new chapter to starting a family.

"You know how when people get married, everyone asks when they're going to start their family?" she said.

According to her, shortly after she and her younger sister, Caitlin MacEachen Steininger, started Cooking with Caitlin 10 years ago, it didn't take long for customers to ask when they were going to open a restaurant. Steininger, a Le Cordon Bleu culinary school graduate, is the creative force of the team.

The sisters delayed the brick-and-mortar progression because they wanted to focus on raising their children.

"Since starting Cooking with Caitlin, we have had four children between us," Steininger said.

Cooking with Caitlin launched as a catering company, but Trush and Steininger altered its course soon afterward.

"(Catering) is a hard way to make a living," Trush said. "It's nights and weekends, and you're always on your feet."

They decided to take their food venture online and started posting recipes from their monthly pop-up dinners (every third Thursday) on their website.

"We never did the same menu twice," Steininger said.

Cooking with Caitlin has since blossomed into a multimedia brand, including a radio show on 55KRC.

CWC is designed with home and family in mind.

"It's an extension of our home, our kitchen table," Trush said.

Perhaps unsurprisingly, the restaurant kitchen is situated in the dining area, loosely mirroring the familiar tendency of guests to gravitate to the kitchen during home parties. There's a bar top and some bar seating at the kitchen. Unlike many other restaurants that have a kitchen preparation area that's tucked away from view, CWC's kitchen is totally open.

"The only enclosed room is the dish room," Steininger said.

In addition to the kitchen "bar," CWC will offer a full bar. The restaurant seats roughly 53, with banquette seating lining the perimeters of the walls. The ceiling will be lined with slats of natural wood to create a barrel vault feeling. CWC will take reservations for only two of its bigger booths, each seating approximately six to eight people.

The menu tells the story of the family's food tradition, which goes back to its matriarch, Norma Antenucci. Antenucci, the sisters' great-aunt, for seven years in the 1950s hosted a cooking program called "The Kitchen Show" on WCPO-TV. She later published her favorite recipes in a cookbook titled "Norma Presents."

"I'm going to do her biscuit recipe," Steininger said.

Baby biscuits with bourbon apple butter and jalapeno cranberry jam are on the menu, along with soups such as chicken consomme and sweet potato with chipotle. Entrees include pastrami and caramelized cabbage with mustard pearls, char cheddar burger and fries, and a Taste of Belgium waffle sandwich with spicy mole braised beef and sliced apples.

The waffle sandwich is a nod to their early days in 2008, when Trush and Steininger were selling burgers at the Strauss and Troy Market on Fountain Square.

"We shared the same tent with Jean-Francois (Flechet)," Steininger said. Flechet, the owner of the Taste of Belgium enterprise, was still operating a one-man waffle stand at that time.

"We were serving burgers and he was pressing waffles next to us. I asked him, 'Do you do anything else with your waffles aside from whipped cream and fruit?'" Steininger recalled. "He said, 'No.'"

The sisters proceeded to buy stashes of Flechet's waffles and used them in their offerings.

"For a whole week, I made fresh croutons and a dinner salad around it, bread puddings with waffles and sandwiches," Steininger said.

The waffle sandwich became popular with their customers and is now on the CWC lineup.

For now, CWC will open only for dinner service on Friday and Saturday nights and brunch on Sundays. The sisters will consider adding more hours as they fine-tune the operation.

"We still want to see our families," Steininger said.

Trush and Steininger hesitate to give an opening date for CWC but said they are confident it will open in the first quarter of 2017. However, a pop-up dinner definitely will happen at CWC on Jan. 19, though the eatery might not be officially open, Trush said.

"People are accustomed to things being a little 'MacGyver-ish' (at our pop-ups)," Steininger said with a chuckle.

"From the bottom of my toes, Caitlin and I are so grateful for the groundswell of support we have received," Trush said.

"Our favorite thing to do is feed people," Steininger added.

Grace Yek writes about food for WCPO.com. She is a certified chef-de-cuisine with the American Culinary Federation, and a former chemical engineer. Questions or comments? Connect with her on Twitter: @Grace_Yek.