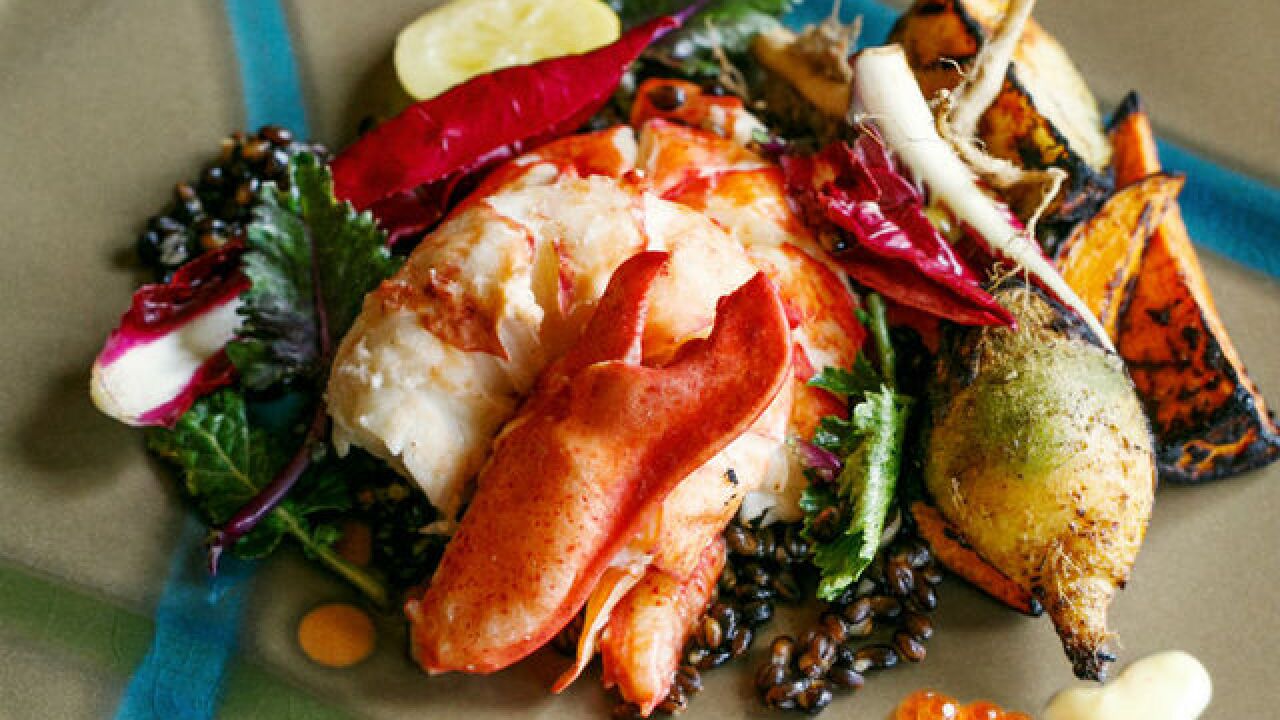 <p>Julie Francis, the chef and owner of Nectar in Mount Lookout, wanted to expose the nuances and contrasts of her assigned artist, Louise Joséphine Bourgeois. Francis observed the artist’s work revolved around sexuality, organic and asymmetrical shapes, often with dark and monochromatic colors, and chose to cook lobster, saying that “the lobster is a symbol of female sexuality.” (Provided /  Gina Weathersby)</p>

Imagine immersing yourself in an artist’s work and expressing your reaction -- with food.

Over the past year, more than 30 of Greater Cincinnati’s brightest chefs, mixologists and even a sommelier did just that, memorializing their expressions in the new cookbook “Cuisine, Art, Cocktails: Celebrating Contemporary Cincinnati.”

The idea of creating a cookbook to raise funds for the Contemporary Arts Center's education department sprouted from the museum's volunteer docents. Instead of simply submitting recipes, chefs were asked to create food to express their reactions to their assigned artists.

Maria Kalomenidou, a CAC board member and seven-year veteran docent, led the project.

“I really love food and I really love art,” she said. “Nobody had really done a book like that before, but it was a challenge I wanted to take."

A gala Friday will celebrate the publication of the cookbook, which will be available for purchase for $50. Roughly a dozen chefs and mixologists who participated in the cookbook will prepare food and drinks at the gala. There will be an art auction, too, featuring more than 35 works of art from more than 40 contemporary artists who have had their work on view at the CAC. Proceeds from the gala will go to support the curatorial and education departments’ efforts

However, Regina Russo, the chief of communications for the Contemporary Arts Center, said the proceeds of cookbook sales will go solely to the education department to support programming, ranging from providing free transportation and field trips for local schools to supporting outreach programs that include visitors from preschool to older adults.

“We will be able to offer as many as 400 students (the) opportunity for a free field trip to the Contemporary Arts Center," Russo said.

The exploratory cookbook project started with only eight chefs, but over time, the roster grew more than threefold. The participants not only volunteered their time, they pulled additional talent into the mix.

There’s an underlying appreciation in the culinary community for the Contemporary Arts Center.

“I think we’re really lucky to have such a great museum in our city,” said Molly Wellmann, one of the city’s most recognizable mixologists. Wellmann is the co-owner of popular establishments such as Japp’s Since 1879, The Famous Neons Unplugged, Old Kentucky Bourbon Bar and Myrtle’s Punch House.

The cookbook serves as a window into the creative soul of local culinary talent, and it was crucial to expertly photograph what that soul looked like.

Gina Weathersby’s name rose to the top of the list for the job. She’s widely regarded among chefs as the “it” food photographer.

Dave Taylor, director of culinary development for the Jeff Ruby Entertainment Group, had a strong reaction to his assigned artist, Titus Kaphar, who is known for his use of split, deconstructed images to expose social prejudices and suffering.

When Taylor saw Kaphar’s Ferguson Protesters Painting, it brought him straight back to his hometown; Taylor grew up in a diverse neighborhood just five minutes away from Ferguson, Missouri. To this day, he feels a visceral connection to that community.

Taylor wanted to express the different realities among the cultural classes he grew up around. He created a dish with strong color contrasts and flavors and aptly gave it a split and evocative name: “Wild Pig (in the Land of) / with Milk and Honey.” Taylor even plated the dish on an old board, split down the middle, to further express the division of realities.

Weathersby extended that dichotomy into her photography, giving focus to one board but not the other.

Julie Francis, the chef and owner of Nectar in Mount Lookout, wanted to expose the nuances and contrasts of her assigned artist, Louise Joséphine Bourgeois. Francis observed the artist’s work revolved around sexuality, organic and asymmetrical shapes, often with dark and monochromatic colors, and chose to cook lobster, saying that “the lobster is a symbol of female sexuality.”

“Here’s this beautiful and sensual lobster, surrounded by charred vegetables with the gnarly roots left on,” Francis said, noting the contrast of the dish.

Weathersby said she could see that the cookbook project liberated the chefs from the business and operational constraints of their daily jobs.

"It allowed the chefs to be children in art class with no constraints other than their vision. Everyone brought their expertise, joy, excitement,” she said. “This truly was a once-in-a-lifetime type of project.”