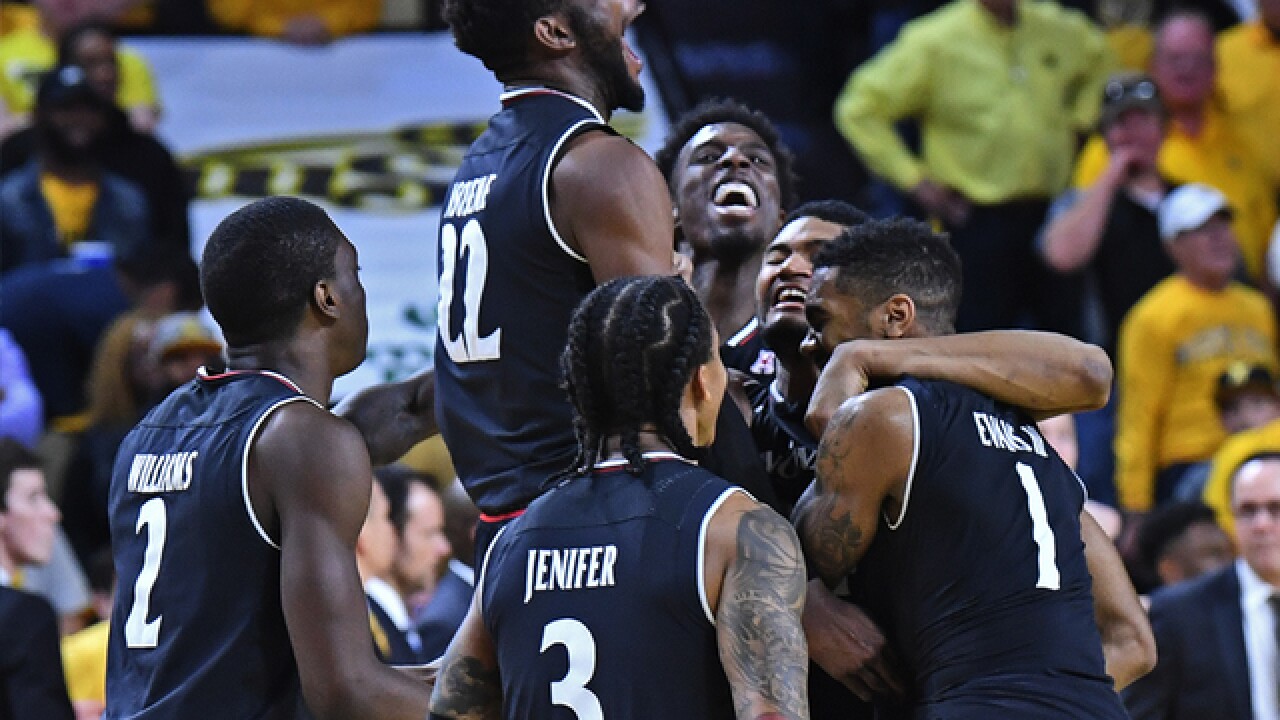 CINCINNATI -- Mick Cronin has no idea how good his Cincinnati Bearcats will look on paper when the NCAA Tournament selection committee gathers Sunday to set the field.

An American Athletic Conference tournament championship might not make any difference in where they stand after claiming the regular-season title this past weekend, but it certainly can’t hurt.

The Bearcats (27-4), ranked seventh in RPI and No. 8 in the Associated Press Top 25 poll, open the AAC Tournament against SMU or Connecticut at noon Friday in Orlando. They already are considered a lock for the NCAA Tournament, with most major bracketologists projecting them as a No. 2 seed.

But UC is looking for its first tournament championship since 2004 and hoping it can be a springboard to a deep postseason run.

“We just worry about the Bearcats,” Cronin said. “Bill Parcells said, ‘They keep score for a reason.’ So if we're going, we're trying to win."

SMU won the AAC regular-season and tournament titles last year and ended up a sixth seed along with UC, with the two programs ranked No. 21 and 22 overall on the tournament seed list. Neither one made it past the first weekend to the Sweet 16. SMU was stunned in a one-point loss to USC in the first round and UC fell in the second round against No. 3-seeded UCLA.

Cronin said the three AAC teams that are considered locks – UC, Wichita State and Houston – all have potential to make deep postseason runs if healthy, but favorable pairings would help.

“Luck of the draw helps,” he said. “I think respect from the NCAA Tournament committee helps if you get it, and matchups are just everything in a one-game matchup. Coaches will all tell you the matchup with who you have to play is just so important because we're all not Golden State. We can't just beat everybody."

The selection committee has sent UC out west three of the last four years – to Sacramento last season and to Spokane, Washington, in 2016 and 2014, which both resulted in first-round exits. The one break came in 2015 when the Bearcats got to go to Louisville.

Cronin is hoping the selection committee will look more favorably on the AAC this year, especially after then-No. 10 UC and No. 11 Wichita State played a thrilling regular-season finale on national television.

The Bearcats won the AAC title outright with a 62-61 win Sunday in Kansas, fending off three WSU shot attempts in the final 10 seconds, including a block by senior forward and AAC Player of the Year Gary Clark.

“It's been well-documented how underrated our conference has been since its inception because we had to have a new name, a new league, but hopefully (the game at Wichita State) on national TV really shed light on the quality of basketball in our conference,” Cronin said.

RPI is the traditional metric used in the NCAA selection committee’s analysis process, but this year, for the first time, the committee will see rankings from ESPN's BPI (Basketball Power Index) and Strength of Record, KPI Sports, Jeff Sagarin Ratings and KenPom.com next to the RPI on the official team sheets used to assess each program. The committee will also see the average score of the six advanced metrics for each team.

In the past, the committee had access to advanced metrics, but the information was presented differently, and the NCAA only endorsed the RPI rankings.

UC is fifth in ESPN’s BPI, 11th in Strength of Record and sixth in the Jeff Sagarin Ratings. KenPom.com rates the Bearcats fourth, and KPI Sports ranks them ninth.

Clark believes the Bearcats have done enough already to earn a favorable pairing, but said it’s important for them to keep their momentum going after Sunday’s win at Wichita State.

“We have always had somewhere in our résumé a bad loss or two or no good wins, but what we were able to do this year was not have any bad losses on our résumé -- our losses are to good teams,” Clark said. “I think it will be different this year. Hopefully we don't end up on the west coast. We've been there basically every year I've been here except freshman year when they stuck us basically down the road in Louisville. Hopefully we get a good seed and everything works out so we have a better chance.”

Winning the AAC tournament could give UC its best shot, though. The Bearcats haven’t won a conference tournament under Cronin but will be making their eighth straight NCAA tournament appearance. They have made it past the first weekend only once in that stretch with a Sweet 16 trip in 2012.

“The more success you have the bigger target you get, but we've been doing that all year,” senior Kyle Washington said. “We're just striving and trying to put ourselves in the best position possible, and to do that, we’ve just got to keep winning games.”