COLUMN: We got to meet Internet superstar cat Lil BUB and you can, too

'She draws people to her' 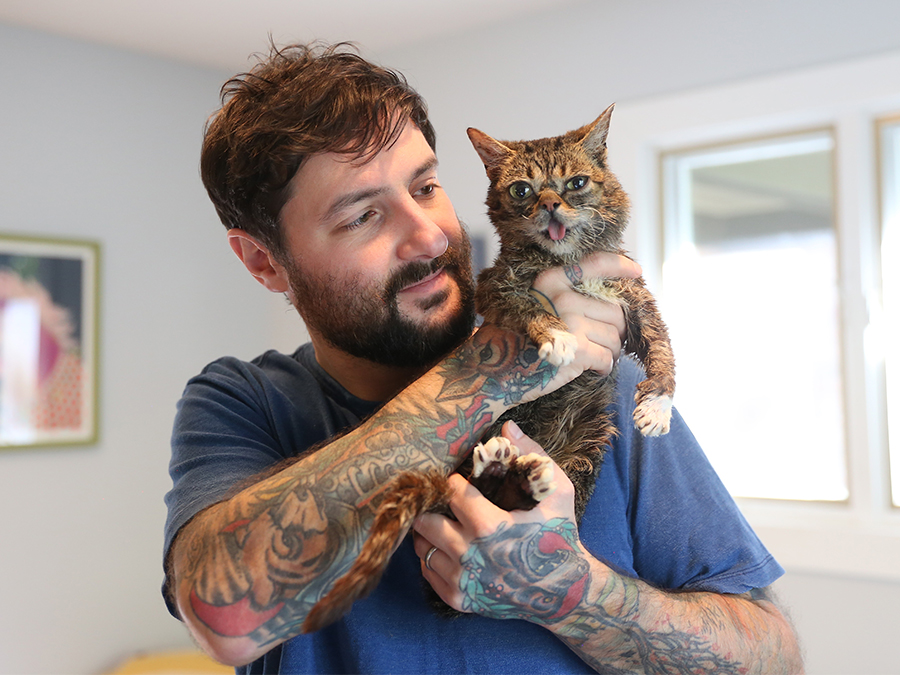 Lil BUB's story has captured the heart of millions, but now those in Greater Cincinnati could have the chance the meet her. 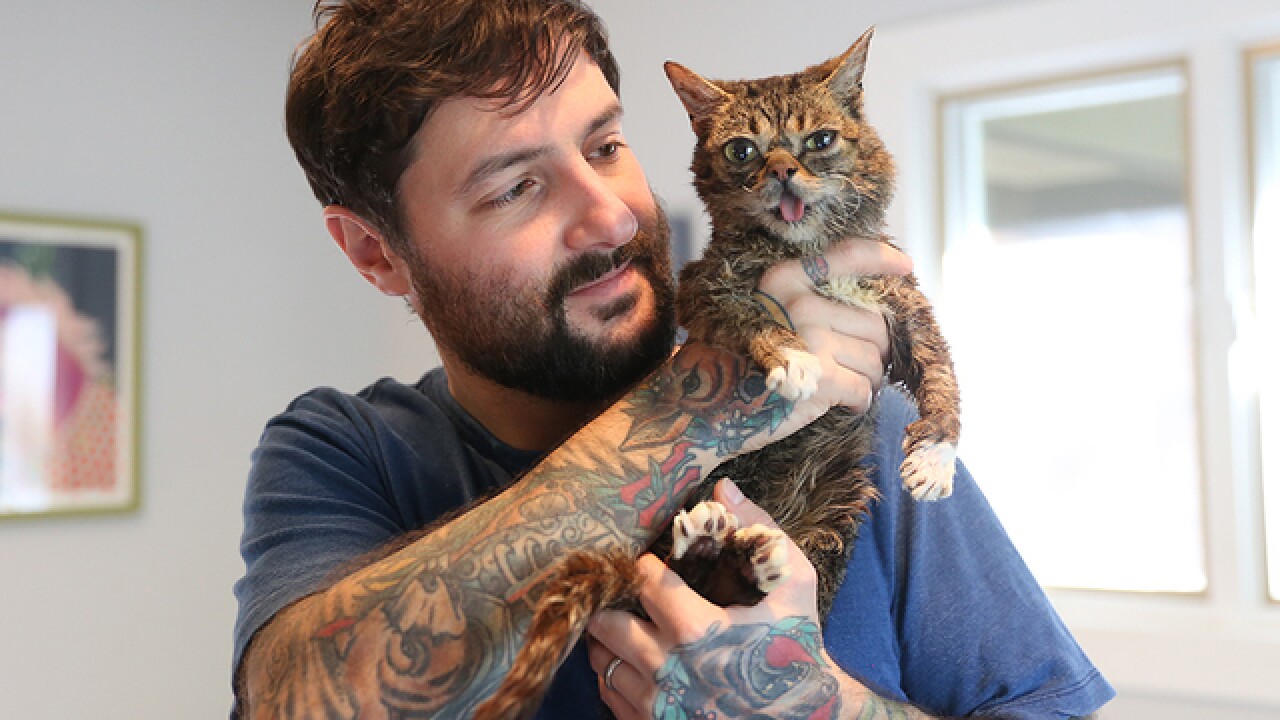 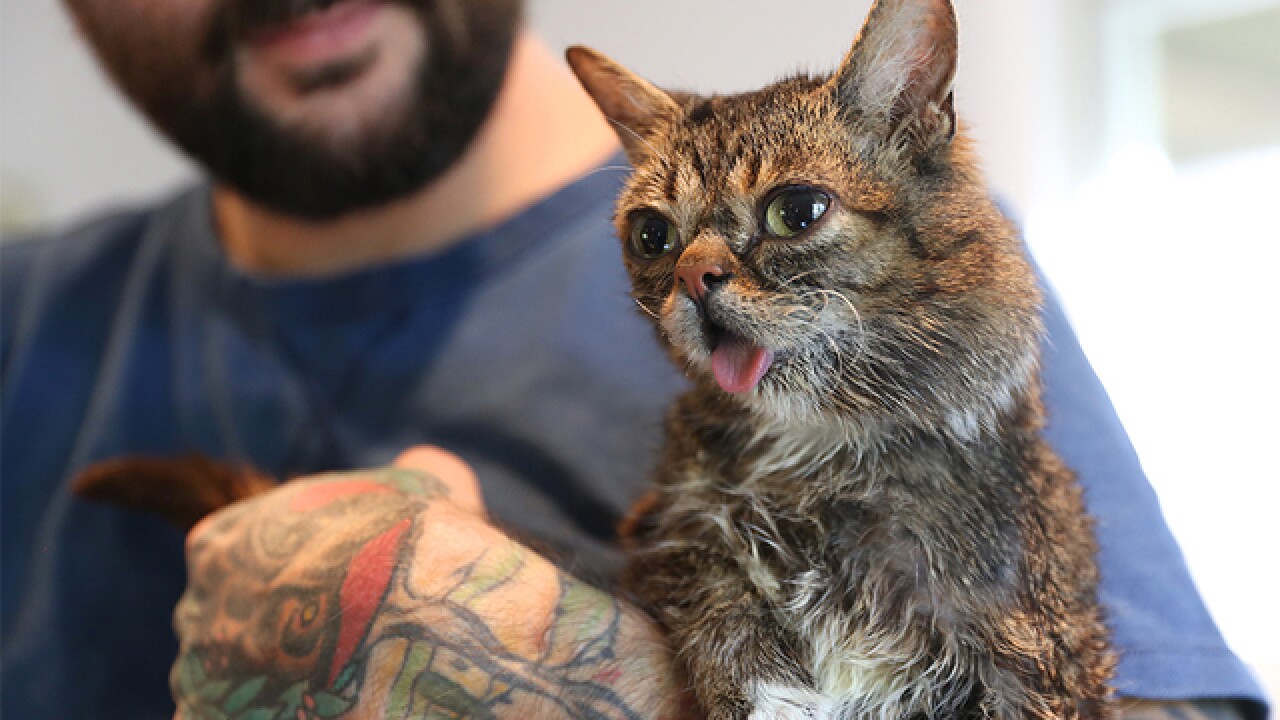 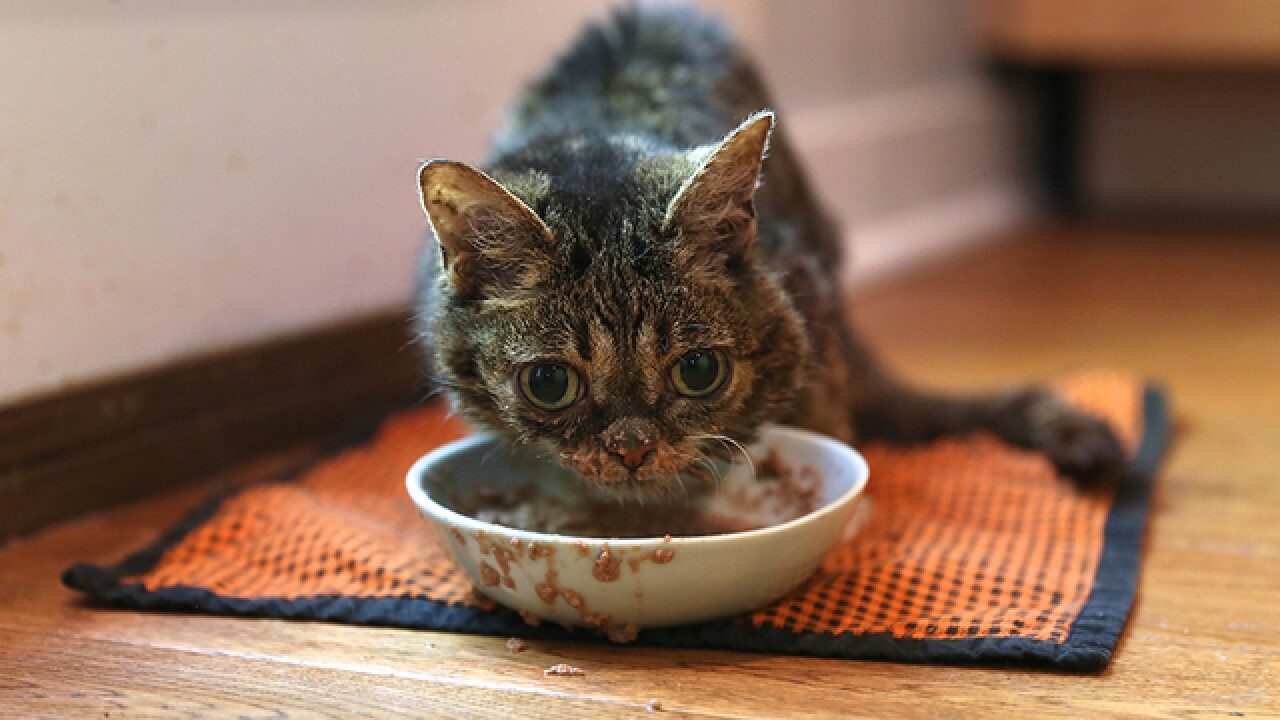 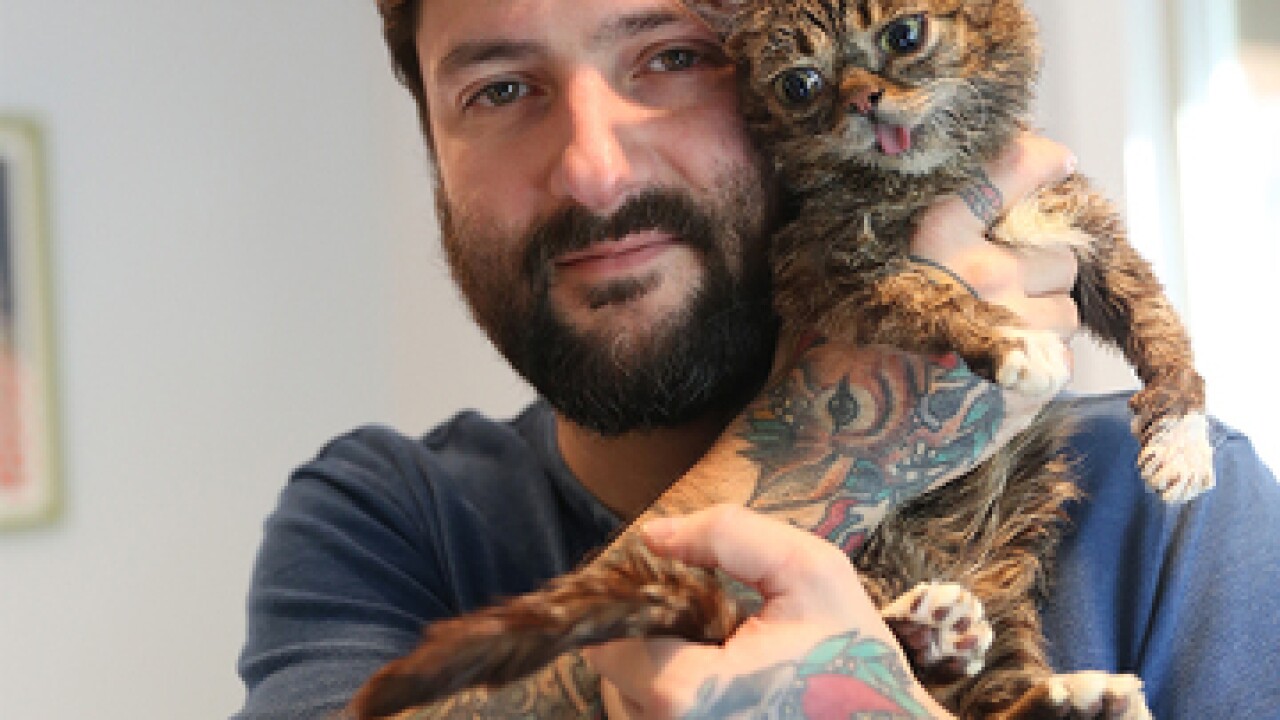 But that’s only because they’ve never met mine: Internet cat celebrity Lil BUB.

She’s also a cat with a message.

“It’s a general message of positivity and acceptance and celebrating our differences,” said Mike Bridavsky, who has been caring for BUB since she was eight weeks old and refers to himself as her “dude.” “I think that resonates a lot with a lot of her fans.”

Full disclosure: WCPO photojournalist Emily Maxwell and I are both big fans of Lil BUB.

We’ve been scheming -- literally for years -- to find an excuse to take a road trip to Bloomington, Indiana, to meet her and do a story on her. Emily found our opportunity when she saw that Lil BUB would be appearing in Dayton at the Gem City Catfé on Nov. 4. Not exactly Cincinnati, but our editor understood our needs and agreed to let us do the story. (Thanks, Meghan!)

Watch the video in the media player above to see Lil BUB walk and talk! And for more on her inspiring story.

Of course, the tickets for the Nov. 4 event could be sold out by now. Lil BUB is an Internet superstar, after all. But if you’re a fan, try to go.

If you somehow remain indifferent to her sweet face, you honestly might be a monster. Or maybe you have other priorities. Who am I to judge?

Either way, keep reading to better understand the magic of BUB.

Every hero has an origin story, and this feline phenom is no exception.

Mike met her more than seven years ago. The mother of a friend of his found a litter of stray kittens, not more than 8 weeks old.

The runt had to be bottle fed because she couldn’t nurse from her mom. Mike fell in love with her immediately and called her BUB because that’s what he always called one of his best friends.

BUB’s teeth hadn’t grown in, her lower jaw was underdeveloped and she had an extra toe on each of her four paws. Unusual, yes, but none of it was a health problem. She was a happy, spry little kitten.

Then about a year later, Mike noticed she was having some trouble getting around.

That’s when BUB’s vet discovered she has a very rare condition called osteopetrosis. Mike describes it as kind of the opposite of osteoporosis. Instead of bones becoming less dense and more brittle like with osteoporosis, they harden and become denser in people and animals with osteopetrosis.

“She’s the only cat in recorded history born with this condition,” Mike said.

The condition makes it more difficult for BUB to get around, although she can walk fine on her own. It could be part of the reason she doesn’t have teeth.

Becoming an Internet celebrity was a whole different thing, and Mike says it happened completely by accident.

Mike had close friends with a cat named Smoosh, and the friends used to joke that Smoosh was Bloomington’s celebrity cat.

Then BUB came along, and the community fell in love with her. Mike's friend made T-shirts for Smoosh and for BUB, just for close friends.

Mike started a blog about BUB, also just for friends, but it got big fast.

The power of BUB

“She is so absolutely incredible,” Mike said. “She draws people to her. And so the blog just built up this sort of cult following very quickly. Soon it was like 500 followers.”

Mike joked that his cat’s celebrity name was “Lil BUB,” kind of like Lil’ Kim or Lil Wayne. He and his friends made T-shirts for her birthday. Right about that time a photo of Lil BUB went "a little" viral, with about 20,000 people viewing it.

More importantly, the love for Lil BUB had what Mike calls “a high conversion rate.” The people loved her, and they wanted her merch.

Mike never meant to make Lil BUB an Internet celebrity -- or a moneymaking machine. He says the same agent who represents Grumpy Cat approached him about managing Lil BUB’s career early on, but Mike turned him down.

“Her sort of rise to fame has always been very gradual and never forced,” Mike said. “I almost didn’t want it to happen. I don’t to anything to actively make her more famous.”

As far as Mike is concerned, he said, BUB’s health and safety come first. He has insisted on controlling her fame and her message so he can make sure it focuses on the importance of animal welfare. And he’s used her celebrity to raise more than $600,000 for homeless pets and another $400,000 for a fund that helps animal shelters provide care for special needs pets.

She has an app called Weather BUB, designed to make you smile every time you check the weather. She has a website loaded with merchandise including T-shirts, socks, plush toys and holiday sweaters. She has a book, a sponsorship deal with HALO cat food, a VICE Media documentary about her first 18 months of life and her own special on Animal Planet.

“I think what is really fueling the celebrity animal thing is the whole influencer profession,” Mike said. “And it turns out that BUB is like the top pet influencer.”

She ranked number 15 out of 25 in a list of Top Pet Influencers compiled earlier this year by IZEA, an influencer marketing technology company.

I’m guessing there are many ways to measure influencer success. Mike's measure includes how active and engaged BUB's many fans are.

James Michalak, IZEA's director of business development, said he thinks the most successful pet influencers have original content and consistency in their "post cadence."

"We typically see the best pet influencers find a niche that connects with an audience while adding an interesting twist to the post," he said in an email response to my questions. "Some dog and cat influencers make way more than their owners and become the primary breadwinners in the family."

For people to succeed as influencers, they need attractiveness, likability and credibility, said Leslie Rasmussen, an assistant professor of communication at Xavier University.

She recently published a study on people who are influencers. While she hasn’t studied pet influencers specifically, Rasmussen said she’s guessing the ingredients for success are similar.

“She is absolutely adorable,” Rasmussen said. “In general, influencers have the ability to activate and mobilize publics, I think in a more organic way than a traditional celebrity. It sounds like BUB is doing that.”

The fact that Mike is managing BUB’s image so carefully helps communicate that credibility to her fans, Rasmussen said.

“He is in a lot of ways throwing down the gauntlet by saying this is our credibility, this is who this cat is and this is her message,” Rasmussen said.

For the love of BUB

That’s not to say Mike isn’t making money from BUB’s fame. He has a family -- a wife and two young kids, along with other pets -- and he is all about supporting them. Being BUB’s manager has become a full-time gig. On top of that, he owns a recording studio and works as a musician.

But Emily and I found Mike 100 percent credible when he said he never sought to make his special cat famous.

He takes her to the litter box to use the bathroom. He mixes her wet food with water, because she doesn’t drink water, and CBD oil for her achy little body.

He smiles like a loving parent when he explains that BUB weighs only 3.5 pounds but eats enough daily for a 16-pound cat without ever gaining weight.

(Another reason she’s my hero, by the way.)

Mike’s love for BUB shines through in so many other ways -- like how he kisses the top of her head and picks food out of her fur and stretches her back legs before he cradles her in his arm.

“There’s a ton of people trying to make their pets famous from a very low level, just to get free stuff, and also to try to make a career or a living out of it,” Mike said, cuddling BUB.

He thinks that can be done responsibly, he says, but he worries about what motivates those people.

And while he concedes that what people do with their pets is none of his business, he does consider it his business to encourage people to put their pets' health first.

“When people ask us how to make your pet famous,” he said, "I tell them, 'You don’t.' And how do you get influencer deals? I say, 'Yeah, I don't think you should.'”

More information about Lil BUB’s Nov. 4 appearance in Dayton is available online. Her website lists upcoming appearances and links to her store, where Lil BUB merchandise is available for purchase.

Lucy May writes about the people, places and issues that define our region – to celebrate what makes the Tri-State great and shine a spotlight on issues we need to address. She and photojournalist Emily Maxwell are animal lovers who have conspired to cover other stories like this over the years.