Teaching kids to be change-makers, not victims 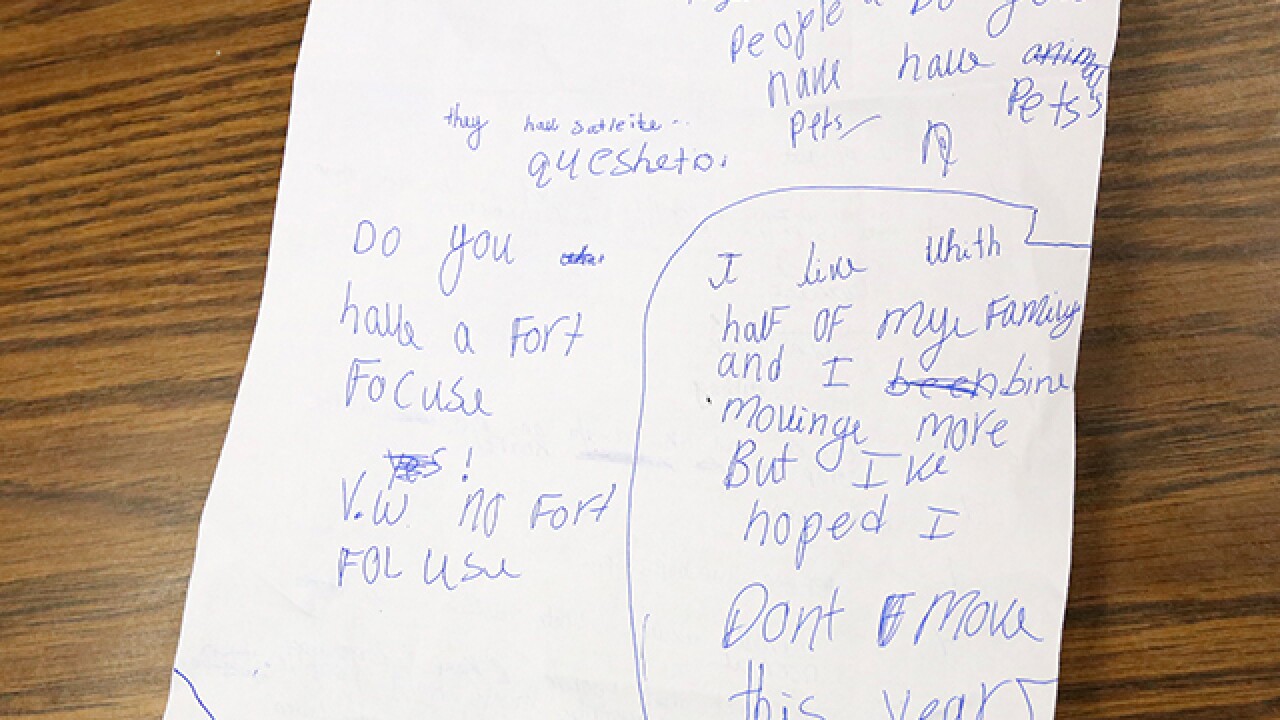 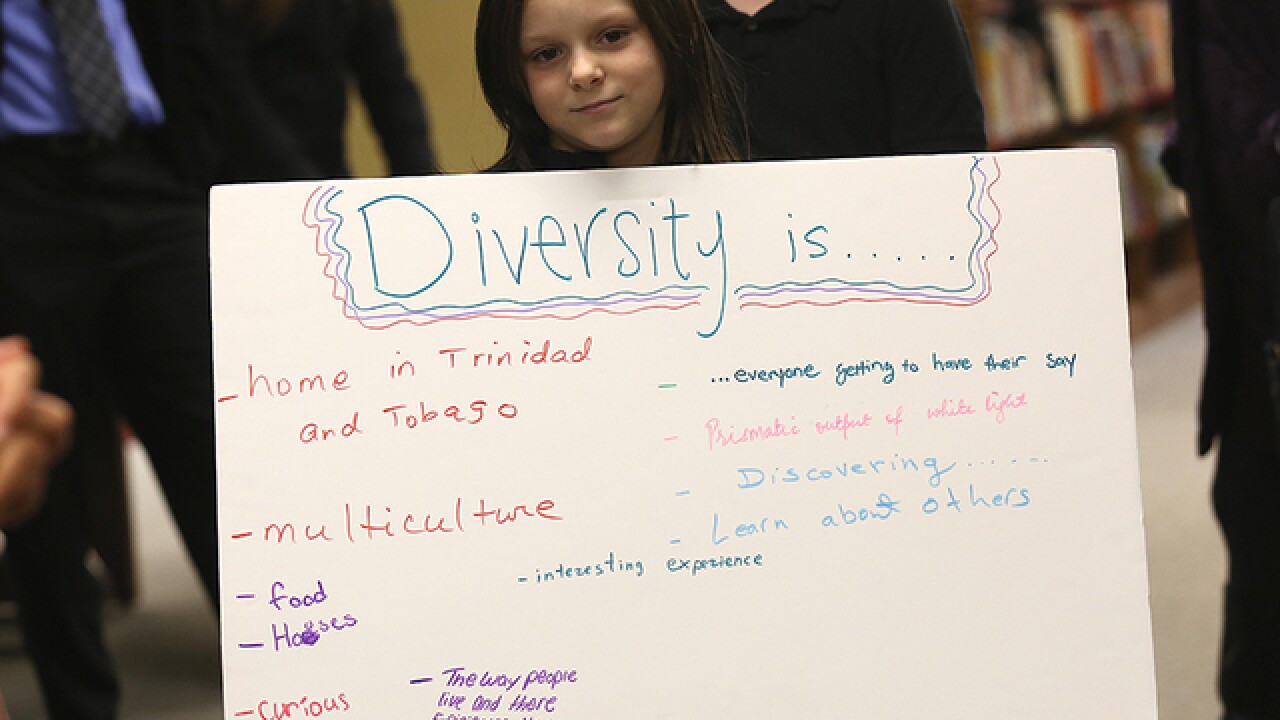 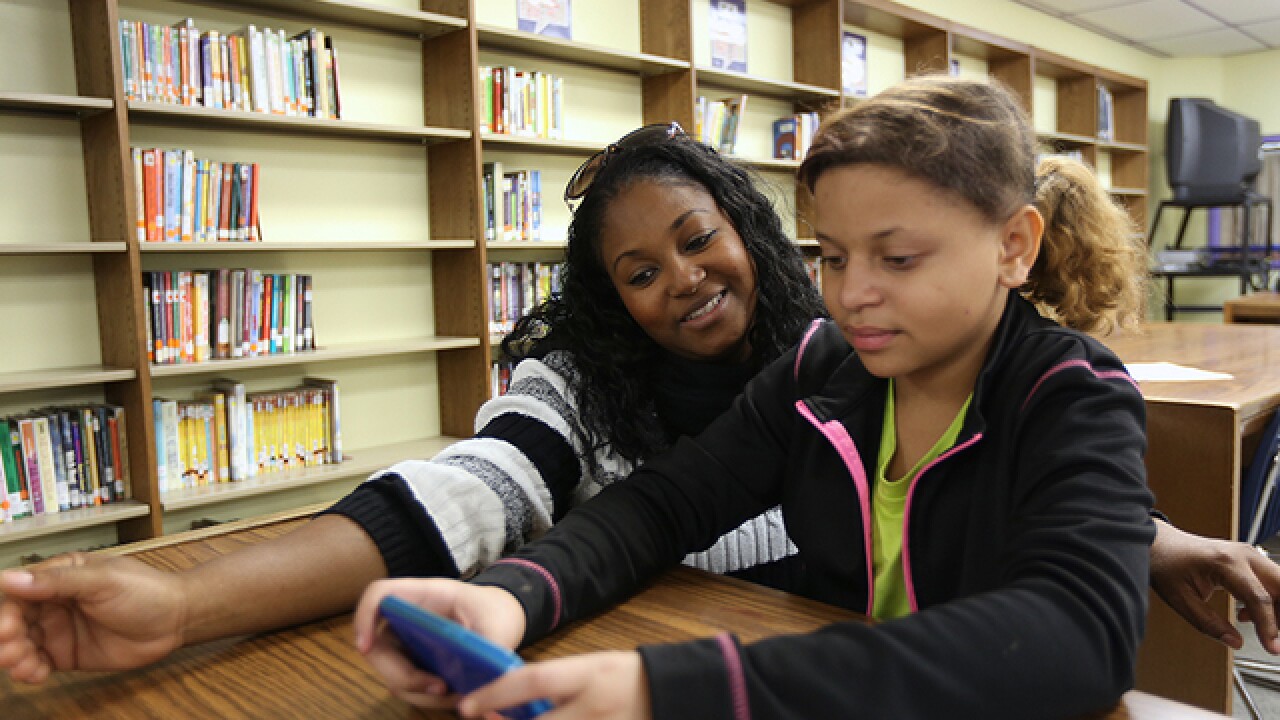 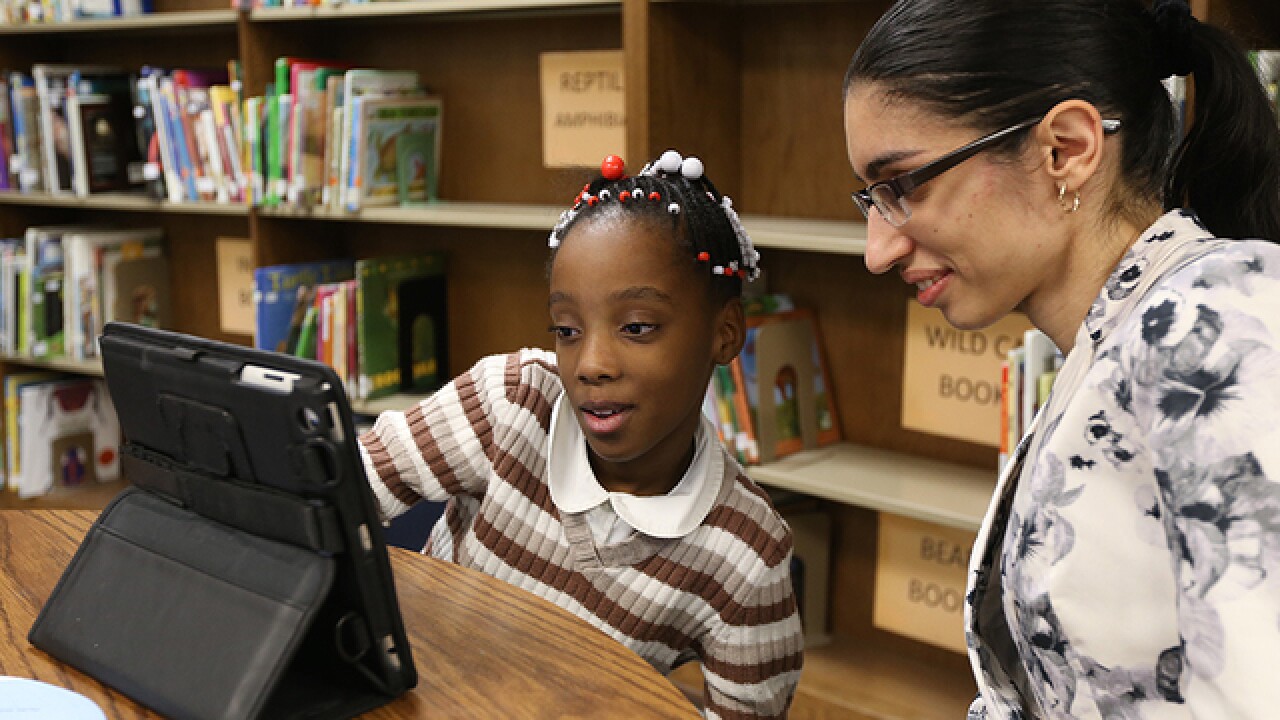 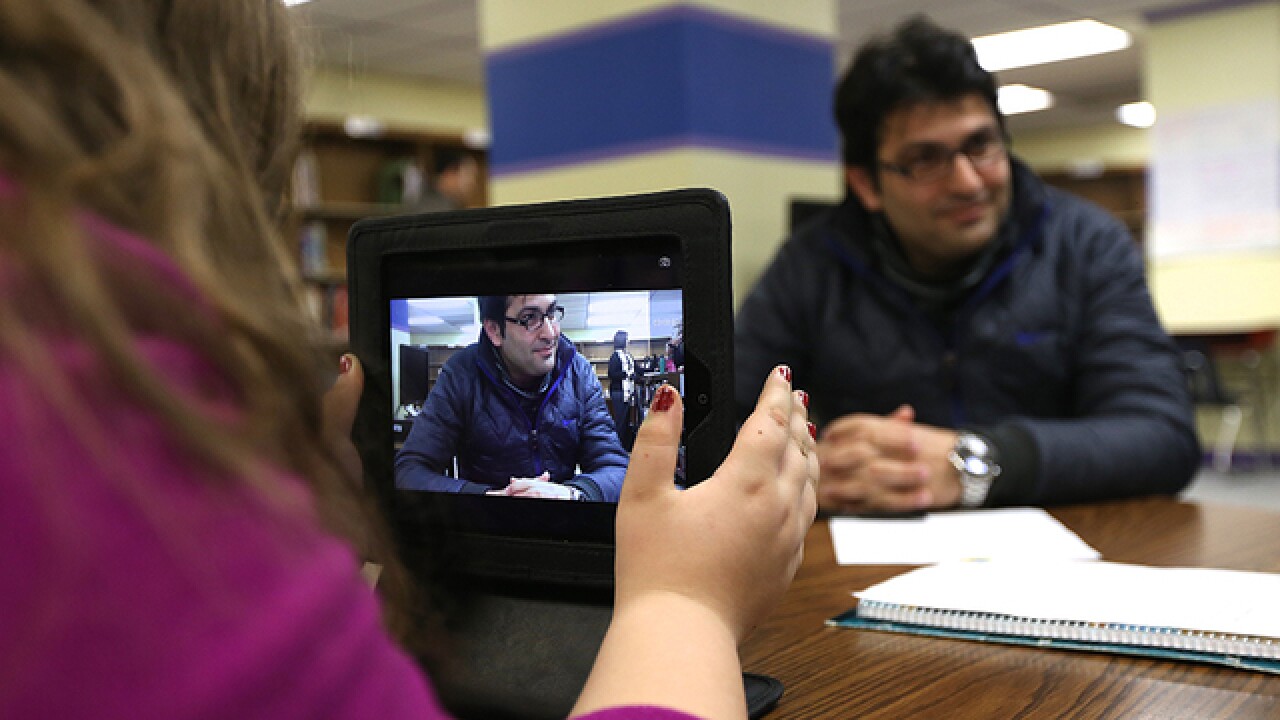 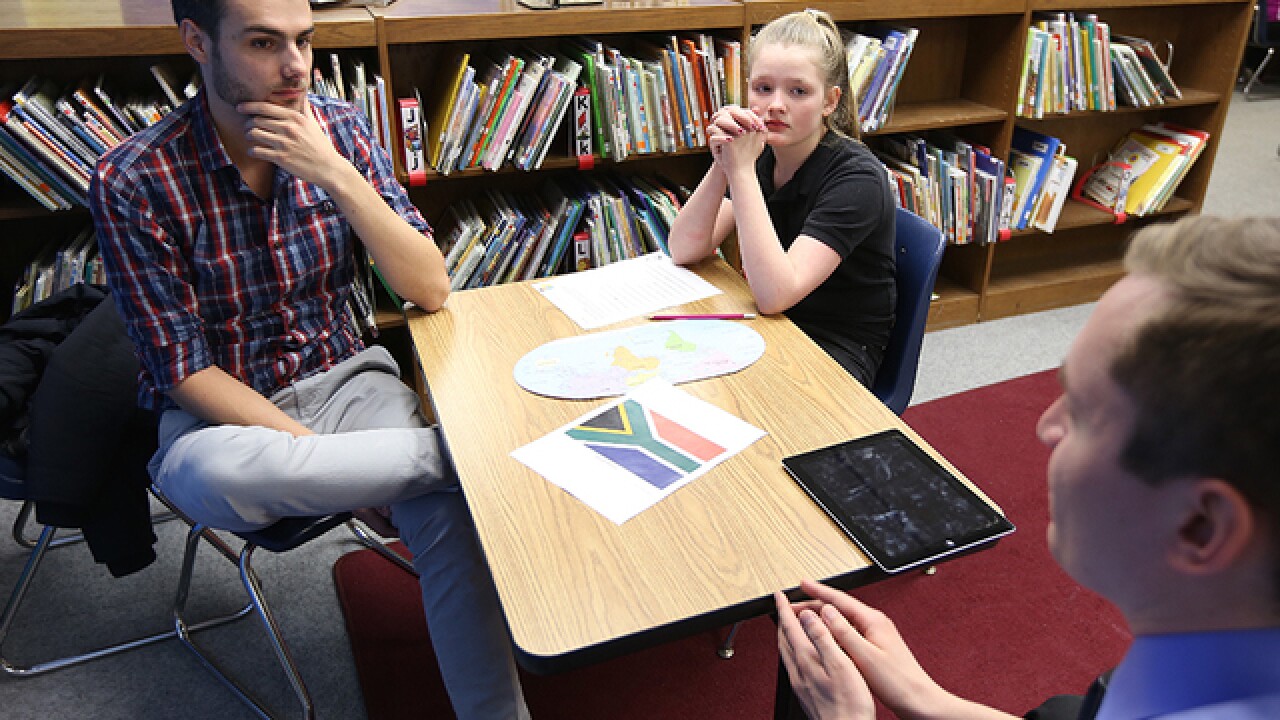 NEWPORT, Ky. — For kids experiencing homelessness, life can be filled with uncertainty.

A new after-school program at Newport Intermediate School aims to replace that uncertainty with a sense of belonging.

The program is a partnership between Newport Independent Schools and UpSpring, the nonprofit formerly known as Faces Without Places that provides educational experiences for Greater Cincinnati children experiencing homelessness.

About a dozen kids in third, fourth and fifth grades are part of the weekly after-school program, which the students decided to name Club Diversity Wildcats.

WCPO photojournalist Emily Maxwell and I visited on Feb. 8 — the group's third meeting since it launched on Jan. 25. It was a special day because international visitors were there with the Greater Cincinnati World Affairs Council. Students had prepared to interview the guests and record the interviews on iPads to show how schools in the U.S. use technology.

For the half dozen adults there through the U.S. Department of State's International Visitor Leadership Program, the time at Newport Intermediate was one of several stops during a packed agenda.

For the members of Club Diversity Wildcats, it was an opportunity to learn about different cultures, interact with adults and build skills they didn't even know they had.

For an hour, she was more than just a third-grader at Newport Intermediate. She was an interviewer, locking eyeballs with Narine Isakhanian, deputy director and computer science teacher at Moscow School in Russia.

The slim girl asked her questions deliberately and listened intently as Isakhanian answered.

"Would you please tell me about your country?" Hevaunly asked.

Isakhanian talked about the Russian flag and pointed out Moscow on a map.

"I live in Moscow," she said. "Moscow is the capitol of Russia."

"Do you have iPhones?" Hevaunly asked.

"Yes we do," Isakhanian answered.

"If you could change one thing in your country, what would it be?" the little girl asked.

"I would want that every child would be happy," the visitor from Russia said. "Not only in my country, but in the world. Because if every child become happy, there would be peace, and there would be a smile on every child. I think it's the most important thing in our life."

That's not unlike the goal of Club Diversity Wildcats.

In every class of 30 students at Newport Independent Schools, two or three of the kids are homeless.

Kids experiencing homelessness in the district aren't usually sleeping in cars or on park benches.

School districts use a definition mandated by the federal government that includes any child who does not have a "fixed, regular or adequate nighttime residence."

The members of Club Diversity Wildcats don't necessarily think of themselves as homeless. They do know how much they move around and how that makes them feel.

One little girl wrote on the back of the paper that listed her interview questions: "I live with half of my family, and I bine moving more. But I've hoped I don't move this year."

The note touched Kristy McNally. Her official title is coordinator of the Newport Services, Tools and Empowerment Project, or NSTEP. Her job is to break down barriers for Newport Independent's students experiencing homelessness. And she has been instrumental in helping to launch the after-school program.

She sees the after-school club as a way to help its young members feel more connected to their school and the adults there who care about them.

"It's important to me that the kids feel connected and a part of something because I think when you feel that way and you feel good about yourself and what you're doing, other parts of your life feel better as well," McNally said.

UpSpring Program Manager Lily Raphael hopes the club's emphasis on diversity and world cultures also will help the students develop respect and empathy for people from different places and backgrounds.

The theme for the school year, she said, is "Think global, act local."

"We'll be continuing to do geography and diversity lessons and bring in people from different cultures and countries," Raphael said. "To keep the local part strong as well, we will have them do service learning projects in Newport and think about what they can do to make a difference."

Ultimately, that should give the students a stronger sense of self, said Ashlee Bedinghaus, a third grade teacher at Newport Intermediate and the school's liaison for Club Diversity Wildcats.

"It's who they are and what their place in the world is and can be," she said. "It really helps them to understand that there are barriers all over the world, but there are ways to overcome those barriers."

A visitor from Cape Town, South Africa, for example, talked to the children about racial tension and segregation in his country, which helped the children better understand what they're learning about those aspects of U.S. history, she said.

"We don't want them to feel that they are just sort of victims of whatever issues are going on," Rapheal added. "They are actually change-makers as well."

It's a powerful lesson for these young students, and Club Diversity Wildcats is just getting started.

With more of the Monday afternoon sessions, McNally is certain the kids in the club will become more confident as Bedinghaus, Raphael and the UpSpring volunteers who staff the program watch them blossom.

Hevaunly, for one, can be bashful, McNally said. But for the hour she interviewed Isakhanian, I would never have guessed that.

"It's all about challenging them," McNally said. "Seeing where they're going to flourish sometimes and continue to expose them to that."

That's the kind of nurturing every child needs, no matter where they sleep each night.