Column: I worked with Marvin Lewis for 14 seasons, and here's why I'm rooting for him to succeed

This coach is a really good guy in every way 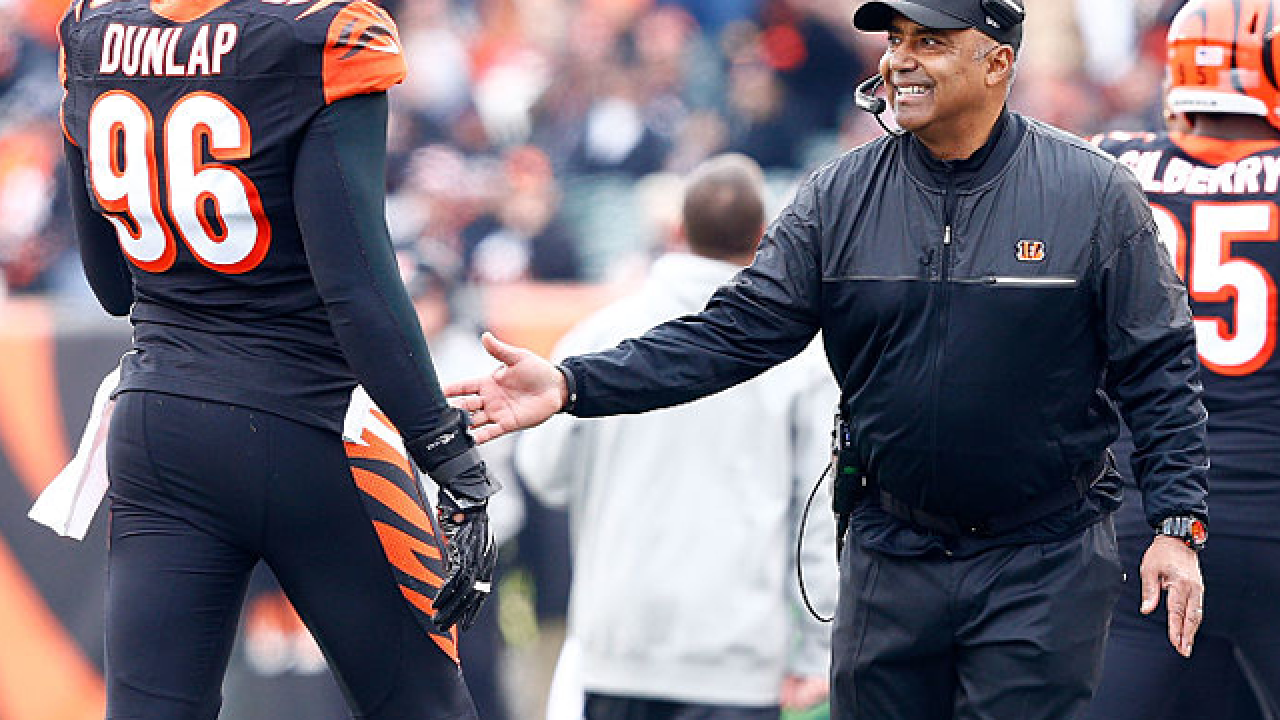 Copyright 2018 Scripps Media, Inc. All rights reserved. This material may not be published, broadcast, rewritten, or redistributed.
Michael Hickey | Getty Images
<p>Head Coach Marvin Lewis of the Cincinnati Bengals congratualtes Carlos Dunlap after the Bengals made a defensive stop during the third quarter of their game against the Baltimore Ravens at Paul Brown Stadium on Jan. 1, 2017 in Cincinnati, Ohio.</p>

CINCINNATI -- As the Bengals pursue a return to the playoffs -- and somehow advancing past Round One -- here's why I'm rooting not just for the team, but, in particular, for Marvin Lewis:

Working with Lewis almost daily, as Bengals public relations director during his first 14 seasons, I never saw him belittle a team staffer, nor really even criticize one in the presence of another.

In other words, even in times of considerable stress, with huge pressure to succeed and much public criticism to weather, I never saw the man let his crap run downhill.

I often overheard Lewis correct or discipline players. With a roster of 80, not everything can be done in private. But he was never overwrought, never out of control, never abusive. I fondly recall one day standing with Lewis outside the lunchroom, trying to gain his attention about something, when a key player with ongoing weight problems tried to exit past us with a small bag of potato chips in hand.

"No, no, no, no," Lewis said, with a big smile, as he snatched the chips and tossed them away. "We're not going to put these empty calories in our body today, are we? Of course we're not!"

The player smiled, too, however sheepishly, and moved on snack-less.

I never heard, nor can I imagine, that anyone in the building ever saw Lewis coming down a hallway and ducked to the side to avoid him.

I never saw Lewis hold a grudge against a media member, mad as he might have been for a short term.

Sometimes it shocked me how gladly he suffered the occasional media fool. And even just within the last week, I've learned, he found time to text a sometimes adversarial scribe regarding a deeply personal moment in the latter's life.

I often heard internal criticism of Lewis' coaching or personnel decisions -- heck, I was part of it; I could second-guess as well as anybody -- but personal criticism of the coach was so rare as not to be measurable.

I saw in Lewis a remarkable gift for being congenial and respectful with everyone he encountered, team employees or visitors. This NFL head coach was never so self-important that he pointedly ignored or haughtily dismissed anyone.

I always heard all of us call him just "Marvin," including when addressing him directly. The only exceptions came when we were in the presence of outsiders who could have misconstrued the familiarity. So in those cases it was always "Coach" or "Coach Lewis." We wanted to model the proper respect.

Marvin knew how to tell you "No." But never without allowing you to fully state your case.

Nor did Marvin expect we could do the impossible in covering his mistakes, just because he was an NFL head coach and could wish it from delusions of unchecked power.

I recall the weeknight he called me at 9:30 p.m. and said, in an oddly charming way, "I guess I just called (Browns QB) Johnny Manziel a 'midget' on the radio. Can you tamp this down for me?" After making several calls and determining I couldn't ("We can't play this down, it's a three-alarm fire in Cleveland," a Cincy TV sports director said), Marvin was ready to move on and draft the necessary apologies. To Manziel, to the fans of Cleveland, and to persons of short stature (who largely regard that m-word as demeaning).

On the rare occasions it was literally closed, maybe he was chewing somebody out. As I've noted, he wouldn't have wanted that audible in the halls. His chew-outs never came with a stripping of one's dignity.

Another thing about Marvin's door being closed: If you really needed him in a hurry, you could knock. Or maybe even open it a crack and poke your nose in. All with a pretty good chance you were not going to get your head sawed off for your audacity.

And no, dear reader, it's not that way with all head coaches. Plenty let power, pressure and ego get the better of them, ultimately to their detriment as men and human beings.

No doubt, a bunch of you are saying, "Forget 'nice.' I want a coach who wins playoff games." And you'd all have a point, for sure.

But this appeal is not meant to seek a lifetime job for Lewis based solely on his personal qualities. Or even on his darned good record in the regular season.

It's just to say that if Lewis can get the Bengals over their playoff hump, it will be bonus cool for fans that their coach is a really good guy, and not some jerk who makes you cheer one-handed (because you need your other one to hold your nose).

So root for this good guy. Root for a Cincy public figure who gracefully handles power and treats others with respect.

What would you or Cincinnati have to lose, for Stripes' sake?