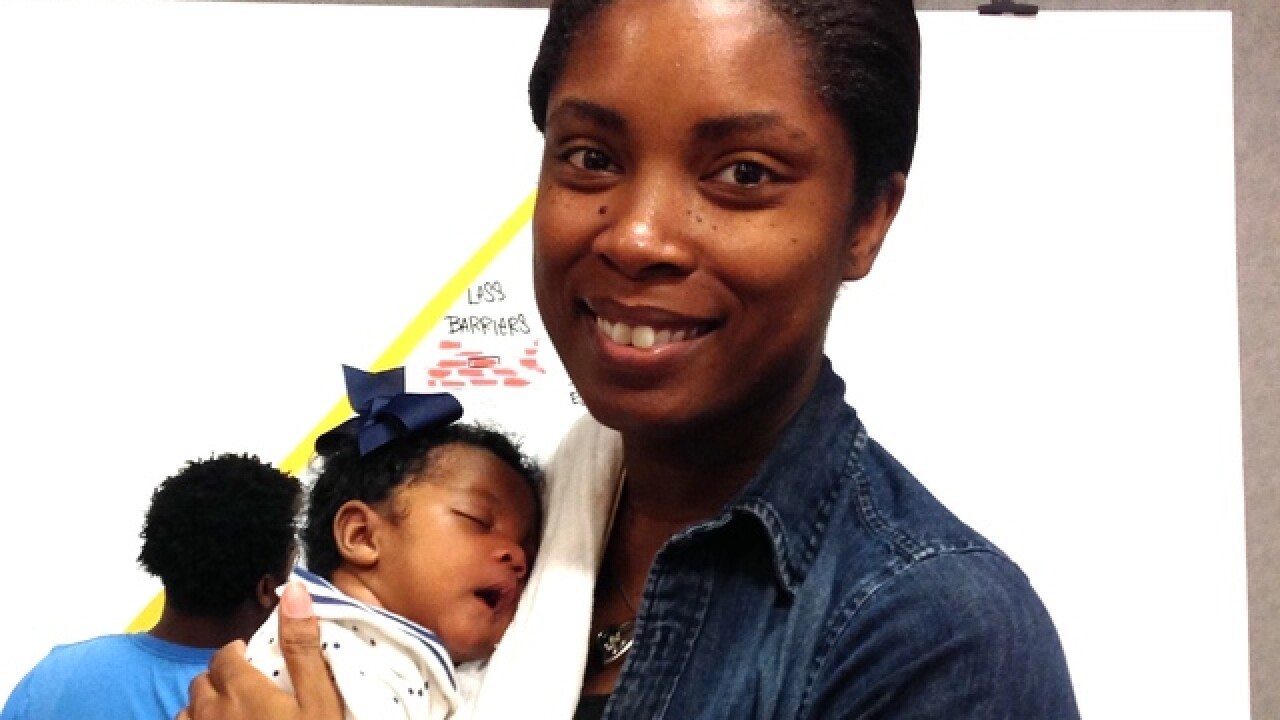 Lucy May | WCPO
<p>Myla Perry with her baby daughter, Nyla, at the Child Poverty Collaborative Community Summit on June 25, 2016. Artist Brandon Black is in the background creating drawings that correspond to the summit.</p>

CINCINNATI — Myla Perry and her family live in West Chester. But she's so concerned about the region's shameful childhood poverty rate that she brought her 7-week-old daughter, Nyla, to Xavier University's Cintas Center on Saturday.

They were among more than 600 people who gathered for nearly four hours for the Child Poverty Collaborative's first Community Summit.

"My interest is in finding out what I can do to help with the solution to ending childhood poverty," Perry said as Nyla snuggled against her. "This is a city of wealth. We shouldn't be a city of poverty."

Related: 'The goal is zero children in poverty'

The statistics in the event's program told part of the story of just difficult it will be for us as a region to dig our way out:

• More than 33,000 children in Cincinnati — nearly half of all children in the city — live in families whose household incomes are below the federal poverty line.

But that's not because their parents aren't working:

• 62 percent of poor children in Cincinnati have at least one working parent.

• And 74 percent of single mothers with children in the city work at least part-time.

The voices of the summit's participants told even more.

One single mom talked about how her children's daycare had a "Doughnuts with Dad" celebration the Friday before Father's Day. Her kids were embarrassed that their dad wouldn't be there, but their teacher said the mom could come instead. When the mom got there, of the 15 parents who showed up, every one was a black woman.

"There was not one dad at the 'Doughnuts with Dad' celebration," she said. "You talk about the kids who are in bed crying. Somewhere in the other room there is a mother crying because she doesn't know how she's going to feed her children."

Another man stood up and said there had been a lot of discussion during the summit about how to change people who were living in poverty.

"We need to ask how should people in power change?" he said.

There was talk about racism and unconscious bias, a lack of hope and a desperate need for more — and better — mental health services, and on and on.

By the end, it was clear to me that a lot will have to change if the collaborative is going to meet its ambitious goal of lifting 10,000 Hamilton County children and 5,000 families out of poverty in five years.

It won't be easy.

Is Love The Answer?

Poverty is a complex problem with dozens of factors that feed into it.

The Child Poverty Collaborative had a "systems map" to help illustrate just how complicated it is.

The map includes such things as education, availability of food, and accessibility to jobs, along with dozens of other factors.

But even with all those labels and pictures, people at the summit said there were many things that were not included in the map that should be.

They listed elements such as "toxic stress," reforming the child support system and justice system and involving the faith community.

One woman stood up and said the most important thing missing from the map was love.

"If everybody acted from a place of love, there's no way we could watch our children go hungry," she said. "If we added love to the map, it would solve every problem we ever had."

But I think everyone there understood that as difficult as it would be to get everyone to love everyone else, it's going to be even more complicated than that.

As intractable a problem as poverty is, however, Tina Anderson Smith said she thinks the Child Poverty Collaborative here is well positioned to tackle it.

She's an independent consultant from Atlanta who has been working with the collaborative and helped plan the summit.

She specializes in "major systems change," and she works with clients to help solve complex problems. She explained to me that in her view, the collaborative has all the right parts in place:

• A backbone — the Child Poverty Collaborative and United Way of Greater Cincinnati staff, along with the group's six co-chairs who are deeply involved.

• A head — meaning that the group is collecting lots of data to help inform its work.

• A heart — the personal stories and examples that help the community understand the importance of the work.

• A voice — the perspective and wisdom of people from all walks of life, especially those who have lived in poverty or still do.

• Hands — the active involvement of the broader committee working on the issue.

• And muscle — people with leverage and the ability to change the structures and systems that need changing.

"When you look at all of that together, there's a wholeness about this that I have rarely seen in other places," Anderson Smith said.

The challenge will be what she calls "confusion endurance."

"It is very tempting and incredibly human to want to isolate different parts of the system or to name things that can be done right this second," she said.

But with something like poverty, with all its complexities and moving parts, it will take time to sort through which solutions work best together, what makes sense to people living in poverty and where leverage can be applied most effectively to get the best result, she said.

"We're talking about people's lives. The people who need this to be resolved the most need it to be resolved quickly," she said. "But I think that patience for the learning, endurance for being a little bit confused in the short-term, is what will get you through this phase."

For his part, United Way CEO Rob Reifsnyder said he was pleased by the outcome of Saturday's summit and the diverse groups of people who were there to work together.

Doctors and CEOs and bankers sat at tables with pastors and single moms and frustrated grandparents.

Lynn Marmer, the collaborative's executive director, wasn't sure at the start how many people would be willing to stand up in the large meeting room and say what they thought.

But each time there was a chance for people to speak, plenty of them did.

"People want to be heard. They have ideas, and they want to be part of this," Marmer told me after the event. "Now we have a lot of work to do."

That next steps outlined in the event's program include:

• Continuing to "listen and learn from our community, especially people in poverty."

• Compiling and reflecting upon what the collaborative learned Saturday.

• Researching options and being informed by "factual findings and community voices."

• Creating a draft of a strategic action plan.

• Reviewing and prioritizing the plan with the community.

And, the step so many people are anxious to take: Beginning to take action and make a difference.

The collaborative has plans for another community summit in October. Michael Fisher, the CEO of Cincinnati Children's Hospital Medical Center and one of the collaborative's co-chairs, said the group has even bigger hopes for that one.

"We'd like to take over the arena part of Cintas Center — not just this room," he said. "All of this is moving toward an action plan."

And if everything goes the way Myla Perry hopes, our community's child poverty crisis will be a thing of the past by the time baby Nyla is an adult.

For more information about the Child Poverty Collaborative, click here.