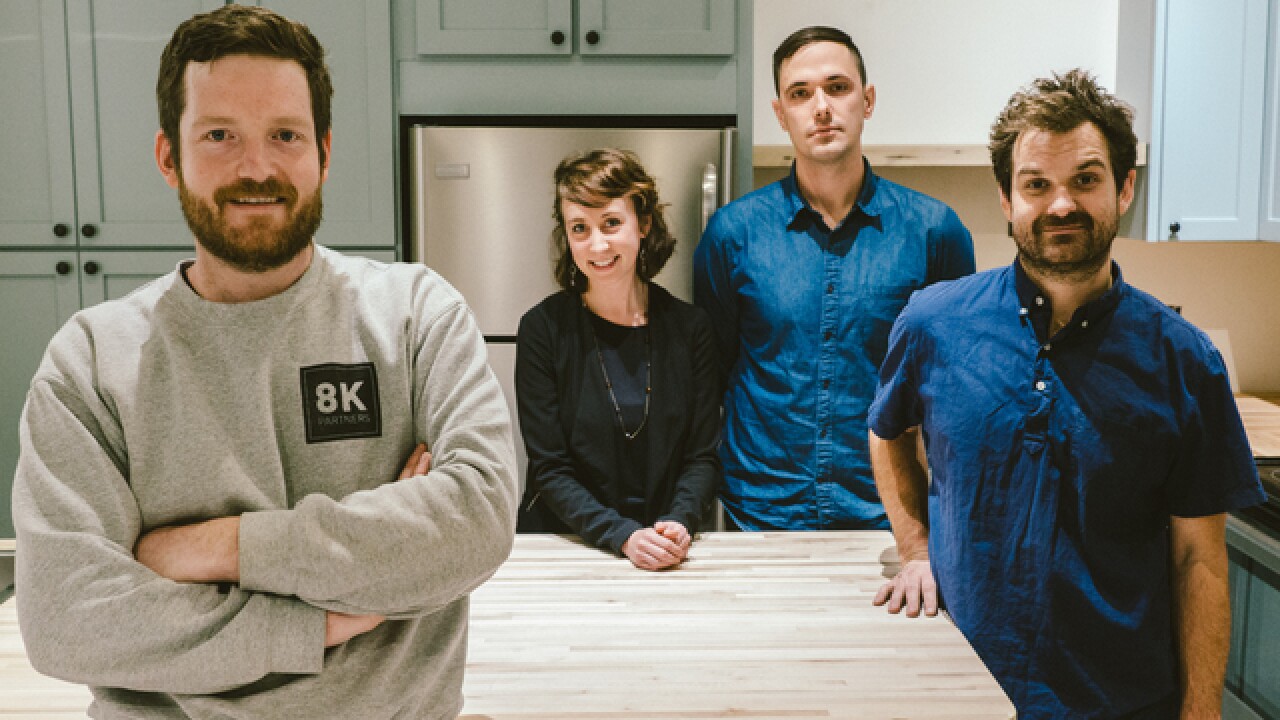 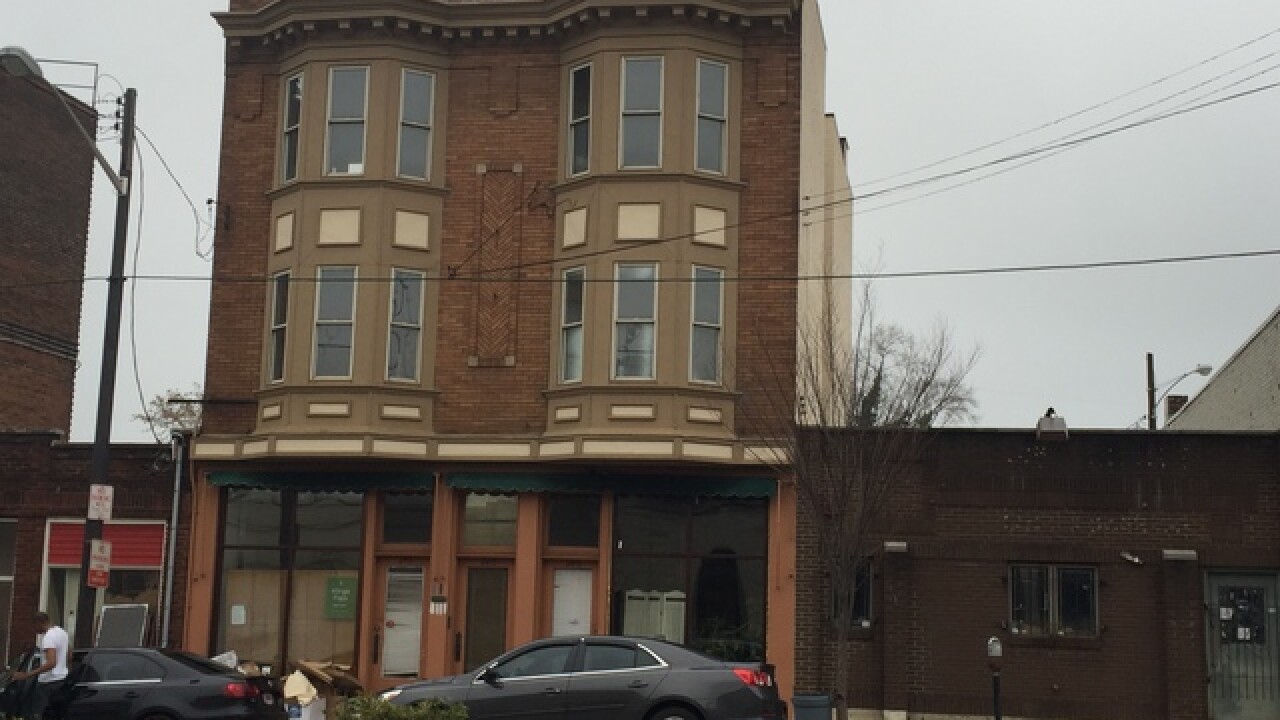 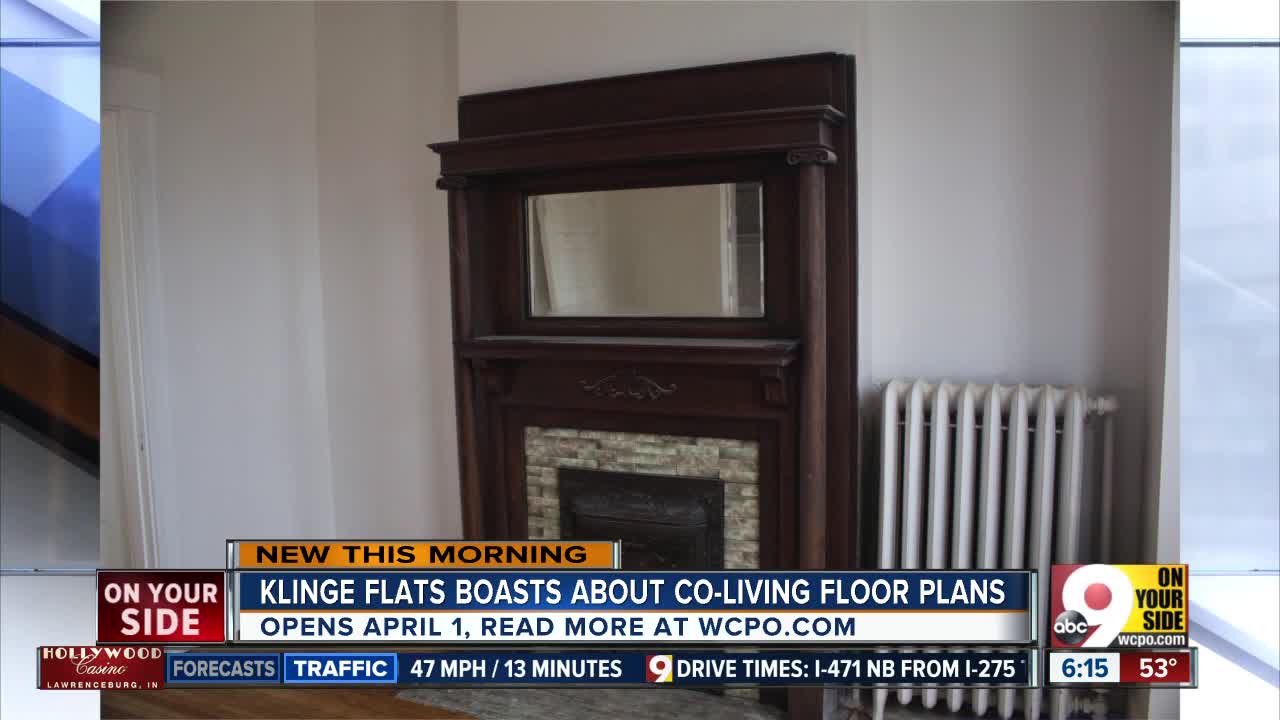 CINCINNATI -- Many dorm-residing college students dream of the day they can have their own bathroom or kitchen, but a new housing option in Walnut Hills is touting shared rooms as its key selling point.

It’s called a co-living space – and the founders of a Cincinnati real estate firm say they will introduce Ohio’s first on April 1.

Klinge Flats at 2411 Gilbert Ave. boasts six private bedrooms, but tenants must share the two kitchens and three bathrooms with that guy or gal down the hall once the space opens mid-April.

The first floor is devoted to co-working space and a communal living room.

Kunsthous, an organization founded by the combination of two real estate companies last August, is behind the idea.

"We were realizing that people didn’t know their neighbors and were living in apartments and might live there 10 years and have 100 people in their building and never meet any of them,” Kunsthous co-founder John Blatchford said. “That story kept coming up over and over again.”

Although millennials are more digitally connected than ever, they tend to have fewer close friends in whom they can confide, according to Forbes.

When Blatchford moved from upstate New York to a McMillan Street apartment in 2010, he overcame this “lonely Millennial syndrome” thanks to friendly connections that changed his life.

Now, he wants to give that experience to others.

"I became friends with people on the third floor within the first two weeks and through those two people, basically everything good in my life has come as a result,” Blatchford said. "The more people that you meet and have a connection with, I think the happier and better we’ll all be."

Co-living, also known as co-housing, has grown in popularity over the past few years along America’s coasts as a solution to skyrocketing rents and stagnating wages.

Kunsthous’ particular version of co-living caters to single people under 35 or couples without kids. They could be recent transplants to Cincinnati who aren’t well-established and need a way to meet others, but Blatchford said empty-nesters could also benefit from communal living.

"When you come home at night, somebody’s there watching TV and you hang out,” he said. “There is something good about that experience rather than just going to your apartment and hiding away.”

Klinge Flats will offer residents at least one community brunch per month, but Blatchford hopes the tenants will start planning their own events over time.

As an example, Blatchford cited a cocktail party and show-and-tell on March 15. Kunsthous' tenants in more traditional apartments in Over-the-Rhine and Northside organized the event.

Average rent in Greater Cincinnati currently stands at $862. However, a Klinge Flat bedroom will cost $650 per month and include utilities and access to hundreds of square feet of shared space.

"Kunsthous will appeal to people who see that square footage as part of their space,” McClanahan said. "As long as you really appreciate the idea of this first-floor living space as mine to enjoy, then it’s a great deal.”

That price point could seem especially desirable as rent in the Queen City continues to climb.

Bloomberg listed Cincinnati as having the fourth largest projected rent increase (by percentage) for American metro areas in 2017, ranking behind only Seattle, Portland and Denver.

Blatchford and McClanahan, a boyfriend-girlfriend team, said they plan to move into Best and Lothes, another six-unit co-living space their organization is opening in the fall with the help of OTR Adopt. The property will be at 205 W. McMicken St.

“The idea of raising a family in a bit more of a communal setting seems really meaningful to me,” McClanahan said. "If we really believe in the idea, then we would live in the idea as well.”

Kunsthous also plans to have a “family-style” building ready by late spring 2018 at 509 E. 12th St. in Pendleton with slightly larger apartments and access to 700 square feet of shared space.

And there are even more co-living properties in the pipeline, Blatchford said.

Who moved my cheese?

The Golden Girls made co-living look easy, but not everyone is so lucky to have their roommate squabbles neatly smoothed out by Hollywood writers in 25-minute chunks. Sharing space with others can always lead to conflict over whose turn it is to scrub the toilet or whether or not someone swiped a leftover Turtle from Gomez Salsa out of the fridge.

Kunsthous is trying to mitigate any drama beforehand, but Blatchford said the company is going to figure a lot of that stuff out as it experiments with the opening of Klinge Flats.

Kunsthous will hire people to clean the common areas and will provide tenants with separate areas for food.

Blatchford said the spaces will also have quiet hours and security above and beyond a regular apartment because there is so much shared space.

"It might not be right for everyone,” Blatchford said. "Every house over time is going to take on a personality, and people who don’t want to be there will move out and people who do will stay. It might be self-selecting in that way.”

Blatchford said he also hopes connecting with neighbors through Kunsthous’ shared spaces will create a built-in accountability and mutual respect.

The theory is it's harder to steal your neighbor’s beer from a common fridge if you’re also friends (or at least you’ll replace it once you’ve drunk it).

Preserving the meaning of place

“Kunst” means art in German, and artfully restoring the architecture and preserving the history of these buildings is important to Blatchford, McClanahan and the two other Kunsthous co-founders, Barrett McClish and Michael Fischer of 8K Partners.

Originally from Loveland, McClanahan has a PhD in history from UC and uses that expertise to dig up long-lost records on the people who lived and worked in the buildings Kunsthous acquires.

She said genealogy websites and local newspapers help her "do justice” to former owners’ and tenants’ lives as she blogs about them and prepares a book to distribute to Kunsthous residents.

Although new construction is also welcome, it’s always important to preserve the social fabric and historical integrity of the community, said Thea Munchel, director of development at the Walnut Hills Redevelopment Foundation.

“Seeing (vacant) places you’ve walked past every day come back into reuse is psychologically impactful to people who call this place home,” Munchel said. “It brings new hope.”

Klinge Flats takes its name from its longstanding residents, the Klinge family, which still operates Wm. Klinge and Son Lock & Safe next door at 2417 Gilbert Ave.

“Inherently, their family is still part of the community and by bringing back out that story, it brings back a little bit of focus to Klinge, which has been a longstanding business here,” Munchel said. "We’re glad to share this with them.”