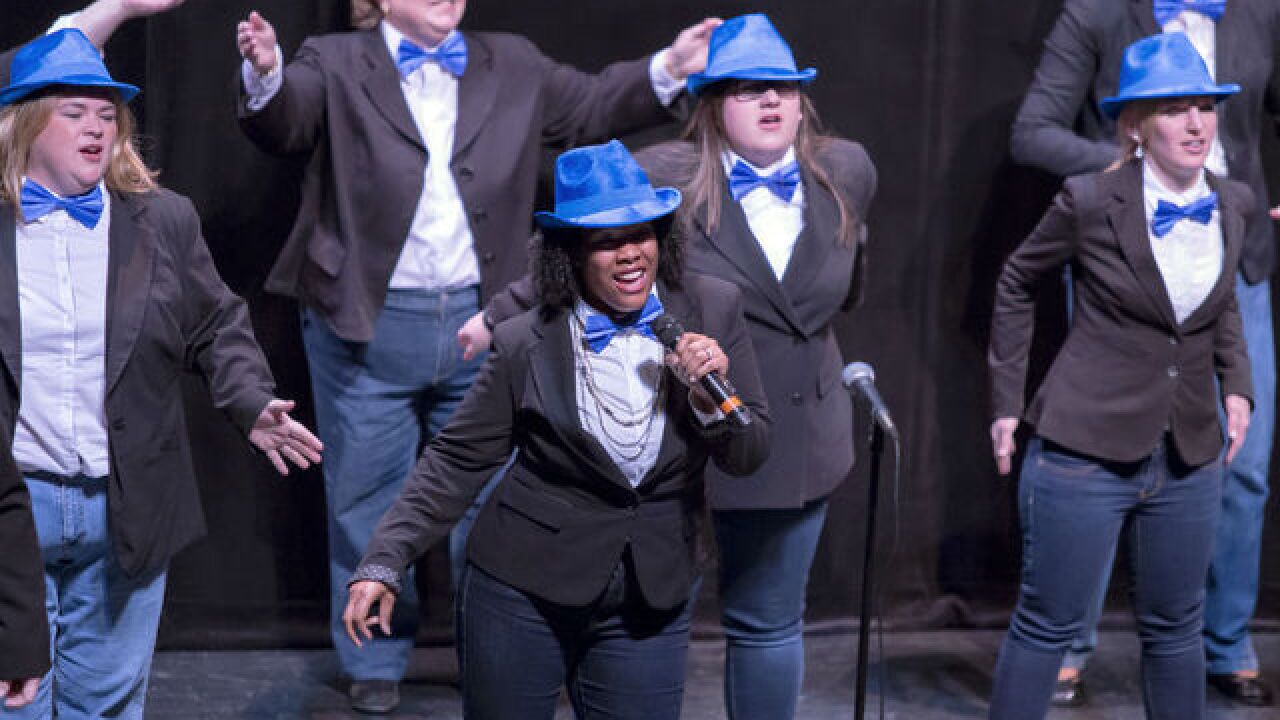 Cincinnati is known as a city that sings. So it’s no surprise that CincySings, an annual event produced by ArtsWave, keeps getting bigger and better.

Employees at various companies form small singing groups that vie internally to represent their company in the citywide competition. But it’s not just about music; the competition builds employee morale and expands awareness for ArtsWave’s fundraising campaign for Cincinnati’s arts scene.

It’s a contest, but it’s also a lot of fun. Acts draw from pop, soul, gospel, ballads, show tunes and rock 'n' roll. Some add costumes, choreography and even bits of comedy.

Since 2014 the event has grown, requiring a preliminary round to narrow the field for this year's finals, set for 7 p.m. Wednesday at Music Hall.

On March 20, 15 choirs competed, and eight were named finalists — from Children’s Hospital, Cincinnati Insurance, Duke Energy, Fifth Third, GE, Procter & Gamble, Christ Hospital and the Glee East Fourth Choir, featuring employees from the Chamber of Commerce and others. Winning teams from 2015, one from Great American Insurance and another from Macy’s Customer & Credit Services, also will compete in the finals.

An online wild-card competition was conducted to round out the finals field: Eight teams assembled performance videos, and more than 12,000 votes were cast.

“The wild card-teams were such fabulous representations of the diverse talent we see every year," said Laura Boggs, ArtsWave’s manager of corporate and employee engagement. "We were excited to see the vote counts climb each day, and once we saw how neck-and-neck two teams were, we decided to be as inclusive as possible.”

That added two more choirs to the finals: a team of employees from Procter & Gamble with members of Young Professionals Choral Collective and another choir from Children’s Hospital.

CincySings is a big deal at P&G, where dozens of performers entertained an initial audience of 400; 650 more viewed a live webcast. Natalie Detrick, P&G’s internal coordinator for the event, said the mission is simple: “Bring people together to celebrate the arts and spread awareness of the ArtsWave campaign.”

“This is the second year we’ve participated,” said Diane Weidner, assistant vice president at American Financial Group, parent of Great American Insurance. “We had three teams this year — GAInfully Harmonious, Simply Great! and Treble Rebels. All our Cincinnati employees were invited to get involved, and it was fun to see them join together to support a good cause. This increased awareness and participation in our ArtsWave campaign.”

A sing-off with an audience of Great American employees was videotaped and shared with others who couldn’t attend. Anyone making a pledge to the ArtsWave campaign could vote for a favorite. Full House, a 2015 Great American team, was last year’s overall CincySings winner. Their victory gave the company an automatic slot in the 2016 competition, and Weidner said everyone is rooting for the Treble Rebels to repeat that success.

Cynthia Brown, who has organized Macy’s campaigns, said the company's team is glad to return.

“Being part of CincySings has created a buzz within our organization about ArtsWave,” she said.

CincySings has gained national attention as an innovative way for the arts to build workplace morale. Americans for the Arts, a national nonprofit organization that works to heighten access to the arts, commissioned ArtsWave to create a CincySings toolkit so the program can be exported to other communities. It's now shared as a successful engagement strategy for other arts service organizations around the United States.

So Cincinnati is teaching other cities to sing.

“The arts have the power to deepen people’s roots in our region,” said ArtsWave president and CEO Alecia Kintner. “The arts can spark creativity and fresh approaches that people will bring back to their work. We’re delighted to see CincySings continue to grow and inspire others, here at home and around the country.”