Cincinnati's neighborhoods suffer from blighted housing. Is a special tax the answer? 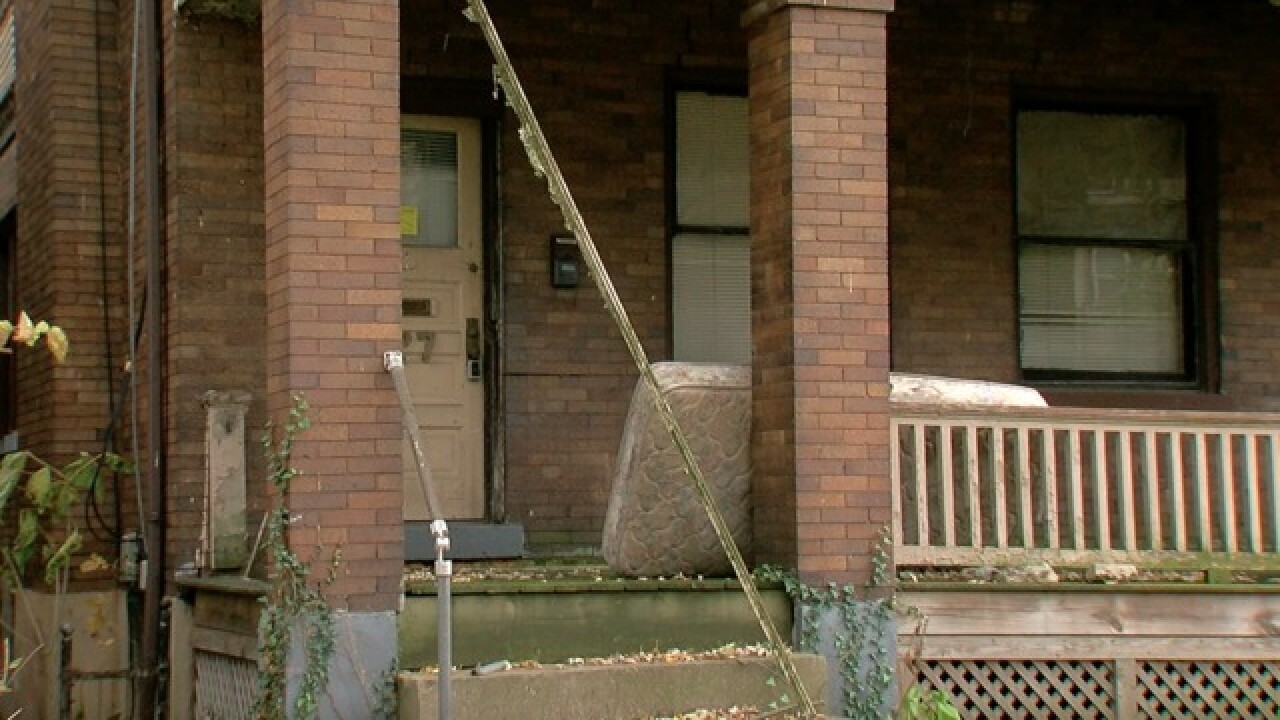 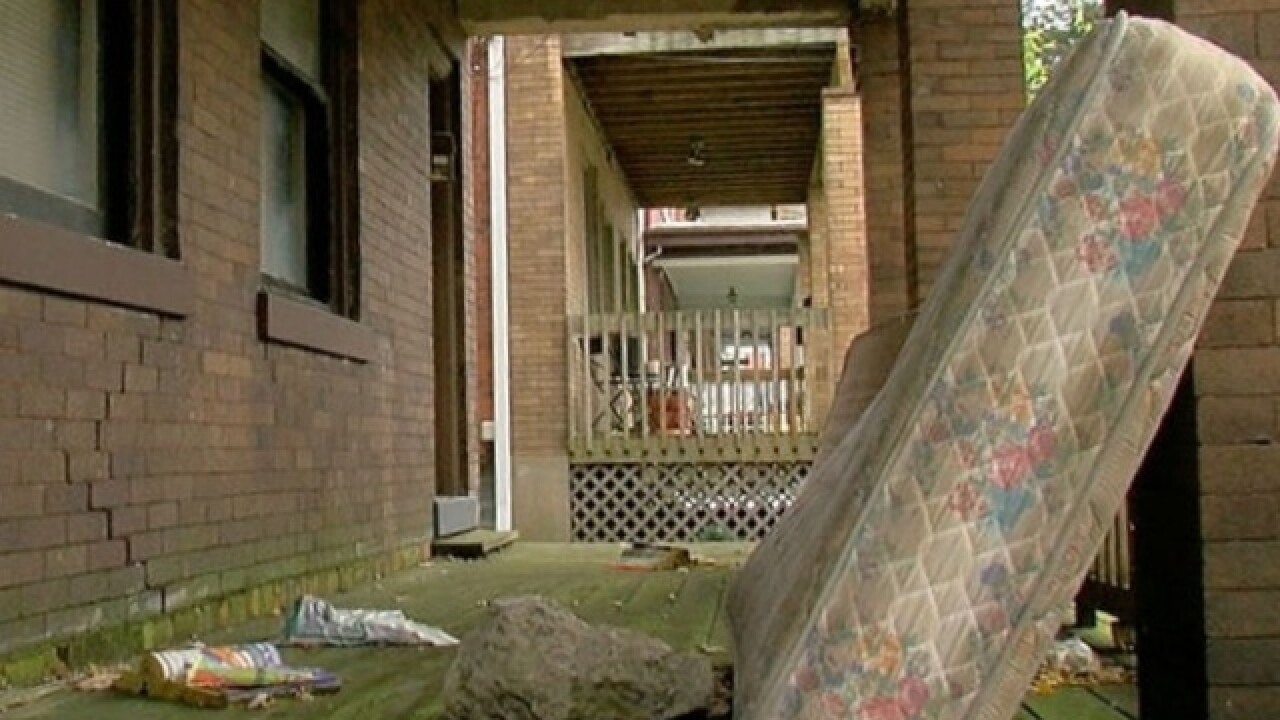 CINCINNATI -- Take a drive through Cincinnati’s Mount Auburn, and the revitalization will be unmistakable.

But blighted buildings still plague the neighborhood and others throughout the city, slowing the impressive progress of breathing new life into old parts of town.

Part of the problem: Out-of-town landlords who are letting vacant and occupied buildings fall apart, with housing code violations going unfixed for years.

"It's depressing," said Irene Hawkins, who owns a meticulously maintained home on Kinsey Avenue directly across from a vacant, blighted home.

"It's depressing because we call the city constantly just to get the grass cut. At one time some of the neighbors and I got together and started picking up some of the trash around," she said.

City leaders and revitalization champions aren’t giving up on those properties or giving the owners a pass.

Instead, they’re looking at novel ways to compel out-of-town owners to fix up their properties or sell them to others who will.

“If a landlord can't afford to maintain a piece of property responsibly, then move on and go do something you can do better,” Dan Schimberg, president of Uptown Rentals, said. “But people are buying property and sitting on it and not allowing the redevelopment to occur.”

The default position of many rental property managers and developers is to oppose government efforts to punish offenders more. But Schimberg is the exception.

“The reason this makes sense is that there’s an incentive for someone to make the outside of their house look bad,” Schimberg said.

In a neighborhood with identical homes, one maintained and the other not, the owner who lets his deteriorate pays less property tax because that property is deemed worth less money thanks to deterioration.

“And that’s an inherent problem especially in neighborhoods like the one we’re in now,” he said, referring to Mount Auburn.

Schimberg is willing to face the prospect of paying higher property taxes on Uptown properties because his company tries to act aggressively to fix code violations, he said. The problem is owners who sit on their deteriorating property waiting for surrounding values to rise to make a profit.

To be sure, it’s in Uptown’s business interest to have blighted properties cleaned up in old neighborhoods. Uptown is investing $100 million into new apartments and condominiums in Mount Auburn alone, including a 259-apartment complex rising on Wellington Place.

Charles Tassell, who handles government affairs for the Greater Cincinnati Northern Kentucky Apartment Association, opposes the idea of layering more costs on landlords out of compliance.

“More bureaucrats and more paper, I’m not seeing that as a solution,” Tassell said.

Strong housing markets like the one Cincinnati is now enjoying attract a lot of investors of all levels of experience, and they all want to turn a profit. Raising taxes will make that harder on an owner already facing expensive repairs, he said.

“Now I have to pay more? You have a pie and there is only so much money in it,” he said.

Pros and cons to charging higher taxes on blighted properties

• Motivation to fix problems before taxes go up.

• Pressure for property owners to sell to rehabbers.

• Another cost added to a business with tough profit margins.

• Another cost that neglectful owners may ignore.

Carol Gibbs, president and CEO of Mount Auburn Community Development Corp., is on board with bad landlords paying higher taxes.

“Whatever kind of punishment we can create would be great,” she said.

Gibbs, who lives in Mount Auburn, is part of a group striving to broaden the neighborhood’s appeal for middle-income earners to live alongside low-income residents. That only works, she said, if all the properties on the block are in decent shape.

“If I am a middle-class family, and I’m living across from a low-income property, I want it to be nice, with flowers in the yard, the tenants taken care of. Low-income residents have just as much right as anybody to live in nice housing,” she said.

Mount Auburn has seen a surge in new and rehabbed housing, but Gibbs is frustrated by problem properties.

“It’s difficult to get families to buy if they’re looking at some property across the street whose owner just doesn’t want to take care of it,” Gibbs said.

“Typically, the slumlord that is allowing building orders to accrue against his property is the same one who isn’t paying taxes anyway,” he said. “You can raise his taxes, but it ain’t going to help because he ain’t going to pay it.”

Flynn said the more productive solution is to intervene before the bills are piling up.

“Adding to the assessment of a guy who isn’t paying his basic taxes anyway isn’t going to do any good unless we are going to move quickly to foreclose and get it back into productive hands,” he said.

Shannon Carr lives in a home she owns on Burnet Avenue and owns another fixer-upper through a nonprofit corporation. She has outstanding housing code violations on both properties and said she is working to get them fixed as quickly as she can.

She's open to higher tax rates for out-of-town, absentee landlords but not for in-town rehabbers like herself.

"I'm in town and I have code violations as well, and I am looking for funding to take care of my code violations. So, raising my taxes is not going to help me," Carr said.

Schimberg counters that a special tax assessment, which hasn’t been formally proposed by any lawmakers, would not put an extra burden on the system and should only target out-of-town property owners.

“This is actually less government because you don’t now have to sit in front of an arbitrator or a judge,” he said. “The building department writes orders as they do today. And if those orders aren’t cleared, your tax rate changes after a certain amount of time. That is then an incentive to the owner and it’s how the city will pay for enforcement.”

The city is flooded with outstanding housing code violations. At last count, there were more than 11,500.

How can they be targeted? There’s broad agreement on one solution: a housing court.

Mayor John Cranley said problem property owners and landlords “judge shop” in the court system to minimize penalties and delay having to fix up properties. The solution, he and many others say, is to establish a housing court that is devoted exclusively to processing the worst cases.

“I think we have a lot of work cut out for us,” Cranley said. “But I have time, and I intend to put time into it."

Cranley said the multi-step process to establish a housing court has to include a lot of input from judges.

“We owe a lot more information to the Hamilton County courthouse, to the judges. They will be consulted by the Ohio Supreme Court and the General Assembly,” Cranley said.

“You have big banks that will use our court system to evict people from their homes and then they turn around and don’t cut the grass, don’t paint the buildings,” he said.

Tassell likes the housing court because it has been established in Franklin County, which includes Columbus. Called the Environmental Court, it handles housing code violations exclusively.

Are there other solutions?

Flynn said the city is overmatched when it comes to tackling every problem property.

“We’ve had some big wins, it’s just there is so much to do. There are so many properties that we have to do something more nimble than the government to do it. A nonprofit, neighborhoods. We need all hands on deck,” he said.

Schimberg suggested that every neighborhood council in the city identify the 10 worst properties in their neighborhood and have the city focus on them until they’re cleaned up.

Cranley said the city housing inspectors will still have to focus resources on fixing properties that pose a danger to residents regardless of the neighborhood wish lists, but he likes the idea of bottom-10 enforcement.

Schimberg said home ownership is key to sustaining the comeback of neighborhoods such as Mount Auburn. And the way to attract and keep homeowners is giving them the assurance that problem properties will be cleaned up one way or the other.

“Mount Auburn suffers from vacant homes and from people who invest in the neighborhood and don’t maintain their property,” he said. “And it’s holding a community like Mount Auburn that has so much promise back."