You can pet the tortoises and dodge the birds
Posted: 7:00 AM, Aug 01, 2018
By: Christine Charlson | WCPO contributor 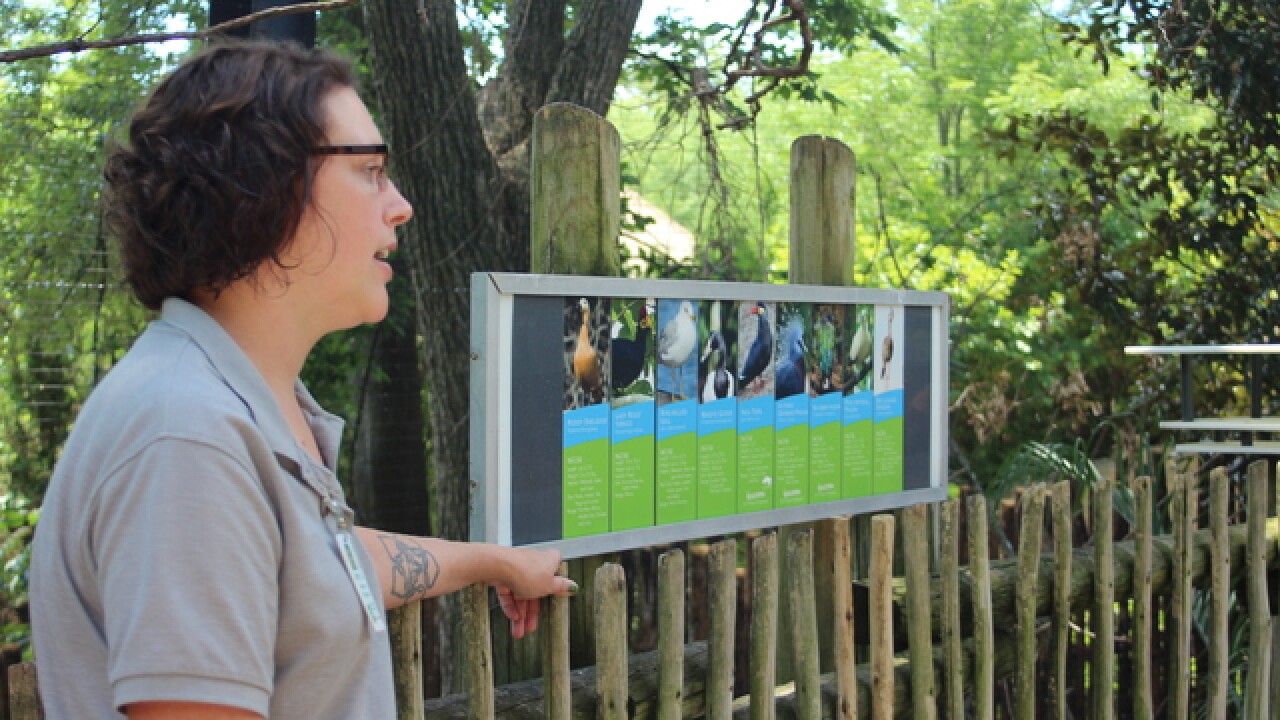 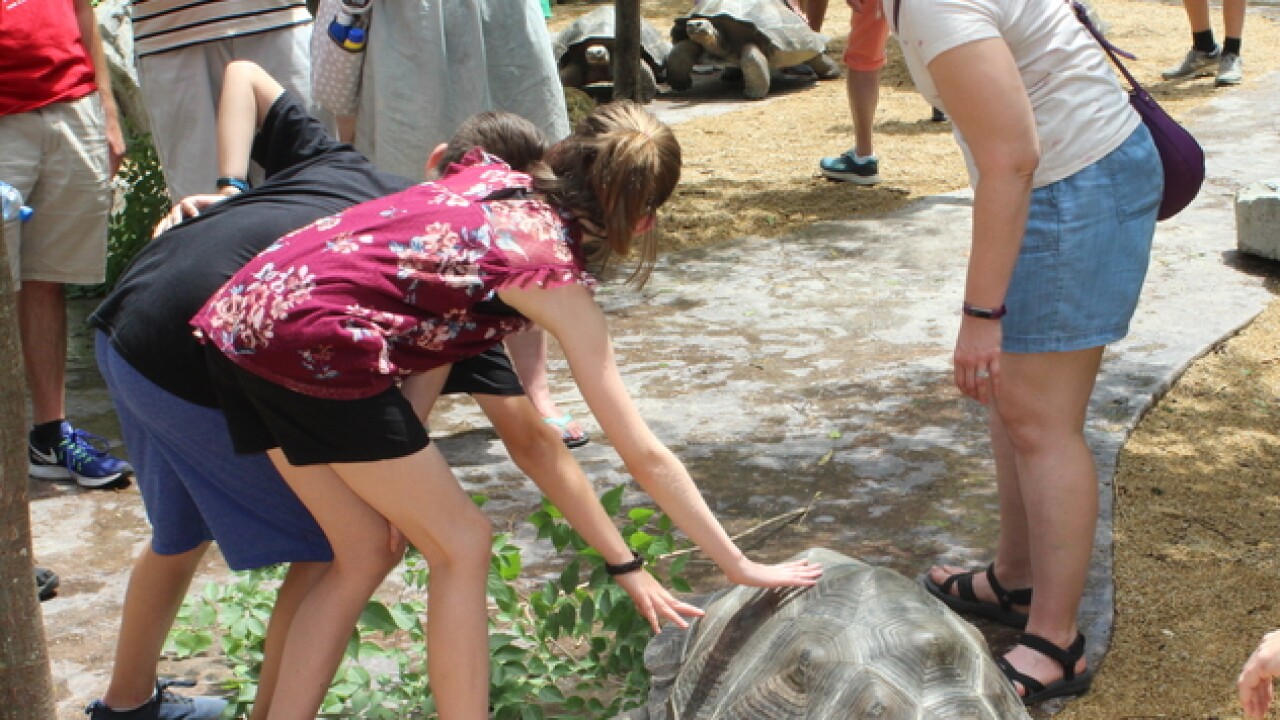 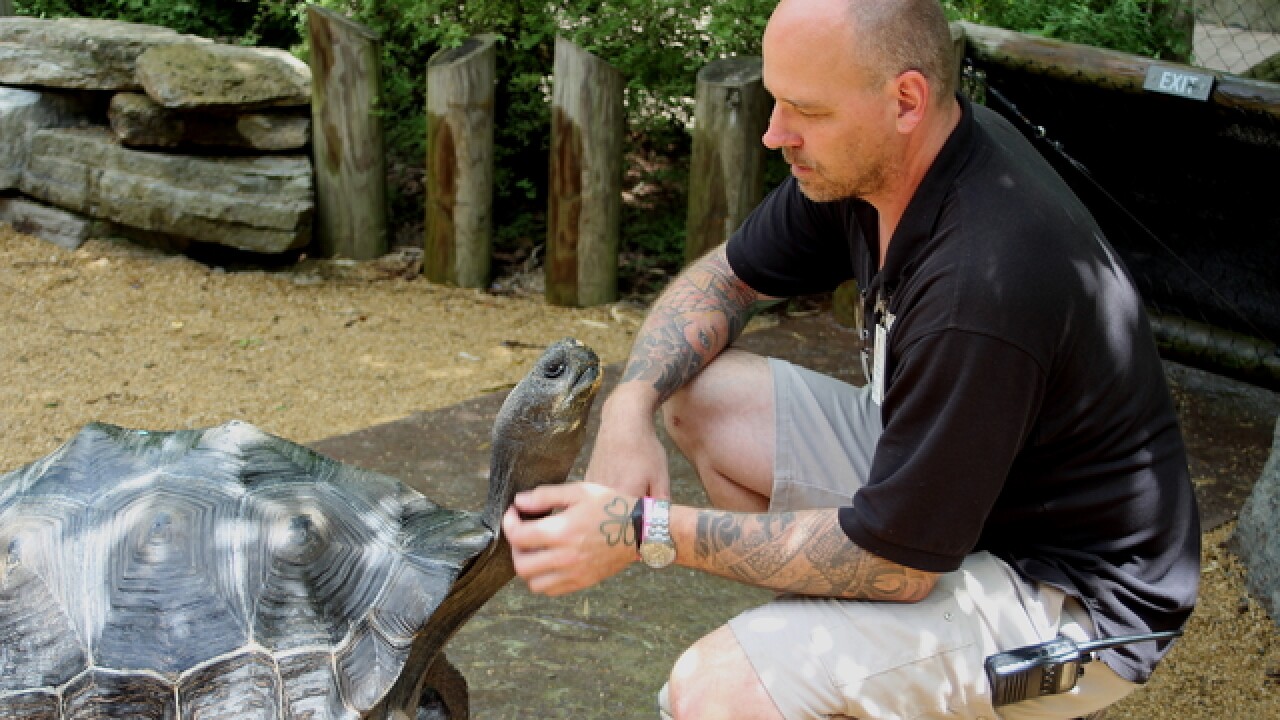 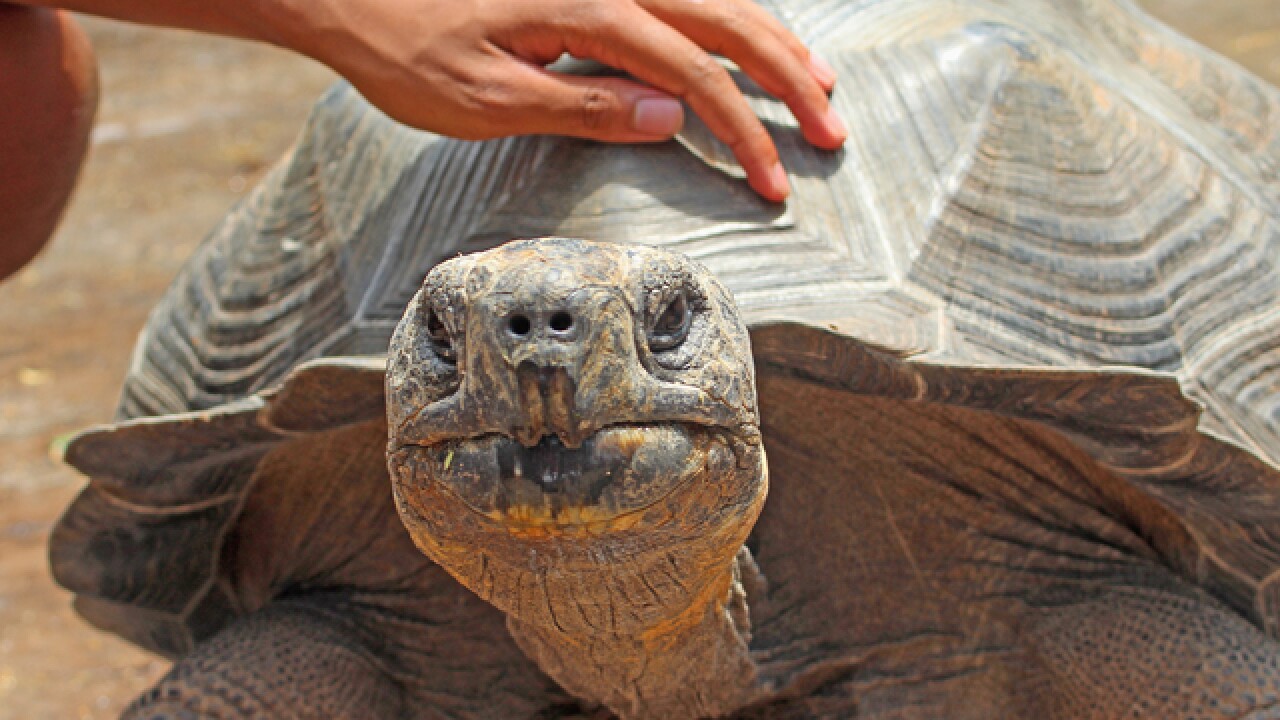 CINCINNATI -- Two new interactive exhibits are helping the Cincinnati Zoo and Botanical Gardens convey its message of getting visitors "close enough to care."

This summer, the zoo opened both the Galapagos tortoise habitat and the Free Flight Aviary, allowing guests to enter enclosures to watch the animals interact and, in the case of the tortoises, get a hands-on chance to say hello.

At the tortoise habitat, Tony Lewis, team leader of reptiles, explained that the gentle giants are enriched by human interaction, much the way domestic animals enjoy being petted.

Once a day, he said, visitors are allowed to walk on the pathway inside the exhibit as the tortoises come over to both eat and interact. Under supervision, guests can pet tortoises on the shell while the care team answers questions about the long-living species.

"So they just feel everything, even when you touch their shell," Lewis said. "Their spine is fused to the underside of their shell, so if a bird lands on them or if it's raining they can feel it."

At 10 years of age, all four tortoises in the exhibit weigh in at around 140 pounds, Lewis said. When Galapagos tortoises reach adulthood, he said, the males weigh anywhere from 500 to 600 pounds and the females around 300 to 400 pounds, living up to 150 years.

When the baby tortoises arrived from the Gladys Porter Zoo in Texas, Lewis said, they were about the size of a baseball. He said with the species expanding in size, they decided to transform the former monkey island into an expansive tortoise habitat complete with a pool and waterfall.

"They've got a lot of room now," he said. "This expansion of their yard was phase one; in the wintertime they go to an indoor enclosure on the other side of the park. But between now and next summer, our architect is working on designs for a building right up here that will be their forever housing."

When finished, Lewis said, the new exhibit will allow the tortoises to go outside even on warm days in the winter. He said that, ideally, the new indoor residence will have viewing windows for guests to look in during the colder months. So far, the turtles seem to be enjoying their recently expanded home, he said, climbing on rocks, sleeping outside at nighttime and going for morning swims in the pool.

"This is the first year we've tried leaving their house open so they can go in and out whenever they want all night long," he said. "So depending on how active they are, sometimes at four in the afternoon they'll put themselves away. They'll just go in their house and fall asleep where no one can see them. We leave it up to them; it's always their choice."

At the Free Flight Aviary, adjacent to the newly renovated Wings of the World, visitors can enter to see nine different varieties of birds from around the world interacting in the same space. Jenny Gainer, team leader of the aviculture department, said that when selecting the species, they chose warm-weather varieties of birds that would feel comfortable with visitors being nearby. She said so far they've had to make a couple adjustments, but the shared space seems to be working out well.

"So basically what we're doing here is a big experiment, to be honest," she said. "We decided we would get a mishmash of birds out here that would do well out here among people and kind of see how it did.

"Pigeons are usually safe species," she continued, "because they don't want to interact with people. But they are comfortable around us, so they will usually perch a little bit lower so you get a nice view of them."

Built in the 1950s by architect Carl Strauss, the aviary formerly housed the Incan kea parrots, Gainer said. But as a cold weather bird, she explained, they didn't tolerate the extreme warm temperatures and couldn't be out all summer. She said so far all the current species seem to be doing well with the heat and humidity, as well as sharing the space as roommates.

Gainer said the only big adjustment they've had to make so far is with a kookaburra that was dive-bombing visitors who entered with hats.

"She was doing awesome out here and we had to move her back inside," she said. "We had a Cock-of-the-rock that did that a few years ago, too, with orange. It's because the males are orange, and you know, the Bengals, there are a lot of orange hats, so the males were dive-bombing guys in the butterfly aviary."

The eclectic mix of birds includes a few individuals who didn't seem to quite fit at other habitats, Gainer said. She said the Red-Legged Seriema moved to the aviary from the bird show and is now thriving and a pair of Ruddy Shelduck relocated from both the African savanna and the rhino habitat.

"This pair is actually from the African Savanna -- they were not working out there," she said. "They were in with the rhinos for a while and they didn't work out there either, but they got along with the rhinos. So they came in here, Plan C, and they're doing great!"

While they may introduce one or two more varieties, Gainer said, they don't want to overcrowd the space and infringe on the birds' comfort levels. If all continues to go well, she said, next year they may introduce bird feeding into the mix, where visitors may offer bird seed or bugs. In the fall, the keas will be back and the current residents will move indoors to their winter homes.

"This is just another experience for people to get close to birds and to appreciate them," Gainer said. "So it kind of mimics the aviaries we have inside, but I think it's just a new experience to be outside with them. This space is a real upgrade; it gives them more room and the sunlight. It's so great for them to be outdoors."