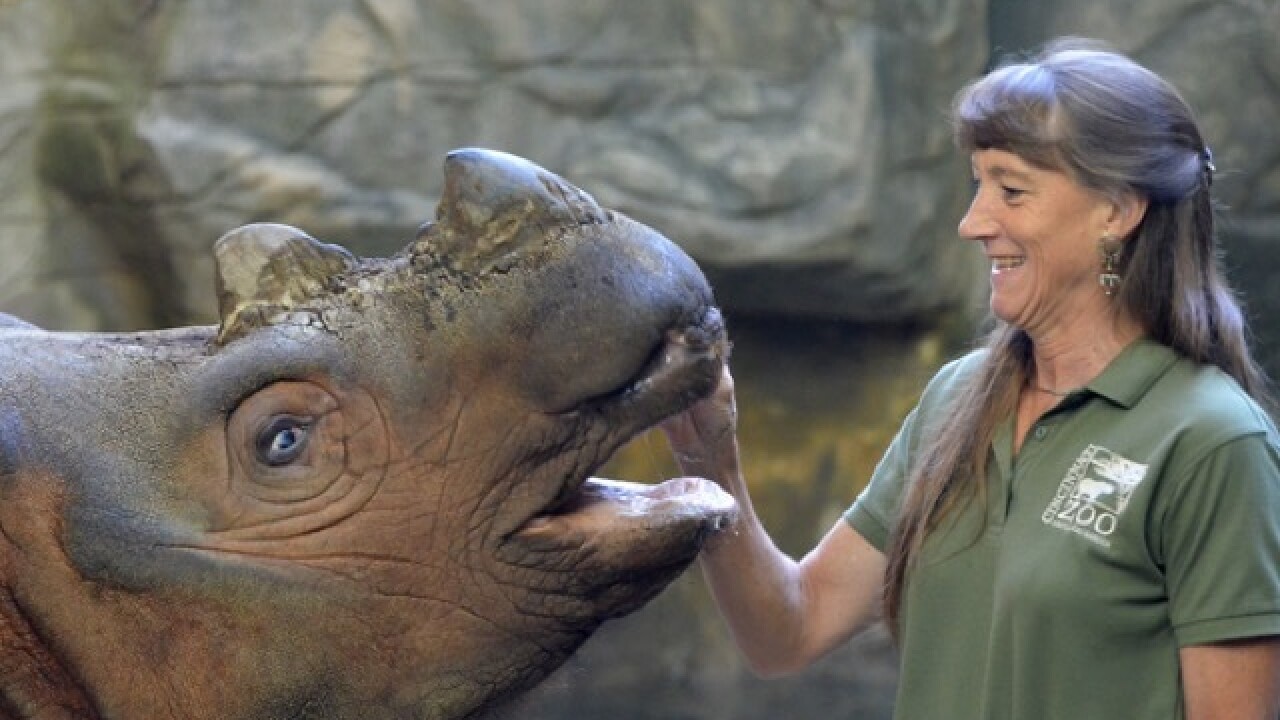 CINCINNATI -- A video of a slow pygmy loris raising its arms went viral on YouTube in 2009. Nearly 7 million people to date have watched the clip entitled, "Slow loris loves getting tickled."

"The loris looked really cute, but in fact putting its arms up is a defense mechanism for the animal -- the loris is actually really uncomfortable," Cincinnati Zoo jungle trails keeper Jeremy Phan said. "What we perceive and what's actually going on is really different."

Lorises have long been victims of humans' belief that the little creatures are oh-so cute, with their large, dark eyes and diminutive size; they have been poached, mutilated and sold as pets rather than being allowed to live in their natural forest habitat.

Phan plans, with the help of the Cincinnati Zoo and Botanical Garden's Internal Conservation Grant Fund, to help reintroduce lorises rescued from poaching back into the wild of Vietnam.

An internal committee comprised of zoo board members and staff awards grants each year to employees looking to extend conservation efforts beyond zoo grounds.

Other grant projects, in addition to Phan's, include protecting an orangutan habitat in Indonesia, assisting with Ohio raptor rehabilitation, captive breeding of scarlet macaws in Guatemala, conserving a stronghold of African painted dogs in Zimbabwe and investigating genetic diversity of Lakeside Daisies in Ohio.

Feasibility, impact for the endangered species and how far the funds provided will go are assessed when reviewing proposals, according to Dr. Terri Roth, who is committee head and director of CREW. In many cases, she said awards go to proposals based in countries where the dollar gets a favorable exchange rate, for instance Nigeria, where funding will go far.

"We could actually support somebody's full salary to be out in the field protecting a habitat, when in fact in the United States it couldn't touch that," Roth said.

Phan said that, despite their protected status, the slow loris and pygmy slow loris are often looked at as commodities in the jungles of Vietnam and southern Asia, where they're coveted for the pet trade as well as traditional Asian medicine. Captors cruelly pull the animals' teeth to render them harmless because they are the only venomous primate. Phan also people kill the animals and use their parts to cure various ailments -- including boiling lorises to make a traditional love potion.

"It is illegal, but it's really hard in Asia when you have governments that can be corrupt and you have people who need to make money to feed their families," he said.

The four reintroduced lorises will wear radio collars which will stop working and fall off after about eight months, Phan said. Funding will allow the Endangered Primate Rescue Center (EPRC) to employ two villagers to monitor the animals' well-being as well as report back on any breeding activity. He said they plan to hire trackers who in the past have captured and sold lorises on the black market for profit, since they're already adept at finding them in the jungle.

"So it's kind of the old switcheroo," Phan said. "One of the best ways to make conservation work is for people to do what they do best, because they know where the animals are and they know where to find them, but paying them to save them instead of kill them."

In northern Ohio, the Lakeside Daisy faces a different threat -- loss of habitat.

U.C./CREW PhD student Megan Philpot, a grant recipient, said the vast majority of the federally threatened species grows naturally on a privately owned quarry. She said since 2009 there's been a huge effort to collect seeds and move them to protected places, but they've lost about 10 acres of habitat, even though the quarry company has been supportive.

"The daisy lives exactly where you'd want to quarry on these big limestone slabs, so that's like one of its primary issues for this species," she said. "Luckily there are a lot of abandoned quarries that have become state parks up in Kelly Island, so a lot of plants are being moved there where it's protected."

She said unfortunately there may be a problem with the 16,000 relocated daisies, as genetic diversity wasn't verified before planting. Philpot explained this particular species of daisy has a mechanism that essentially prevents it from inbreeding with genetic matches. As part of the grant, they'll test the Kelly's Island populations to ensure diversity exists for future generations.

"What we'll be doing is pulling leaves from individual plants and checking to see how closely related are these introductions to the natural population on the quarry," she said. "Genetic diversity is super important, because the more diversity there is in a species, usually the more able it is to respond to change."

The zoo committee tries to spread funds to a variety of species in need, Roth said. She said grant awards ideally should tie it back to the zoo's collection, so there's a close association with plants or animals in their care.

Programs like these are designed to take zoo staff's individual passion to help a certain plant or animal to the next level, she added.

"I think it's just a really nice way to empower our employees to help conserve wildlife on a bigger scale," she said. "It's going beyond the day-to-day care which is very important and they all do that very, very well. But it's just for those who show an initiative to know they can take that extra step."