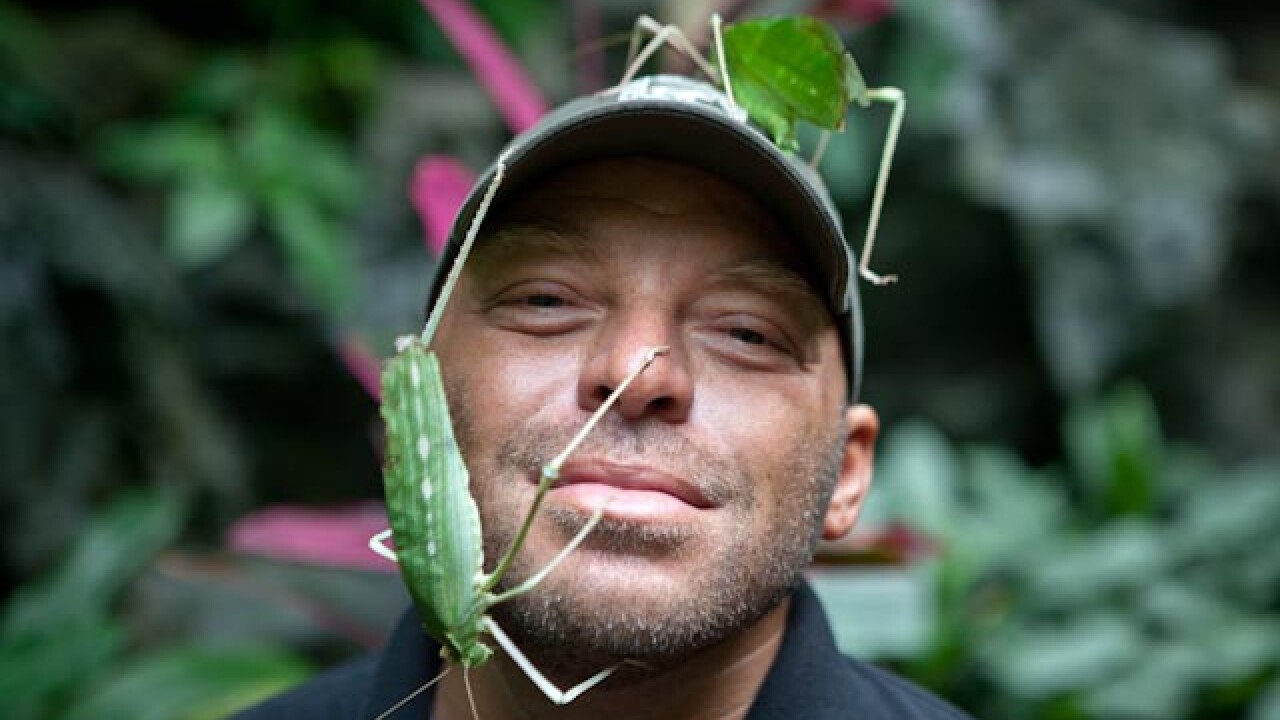 Provided
Cincinnati Zoo World of Insect curator Winton Ray says it&#39;s not too late to turn the tide on the insect apocalypse. (Photo provided by the Cincinnati Zoo) 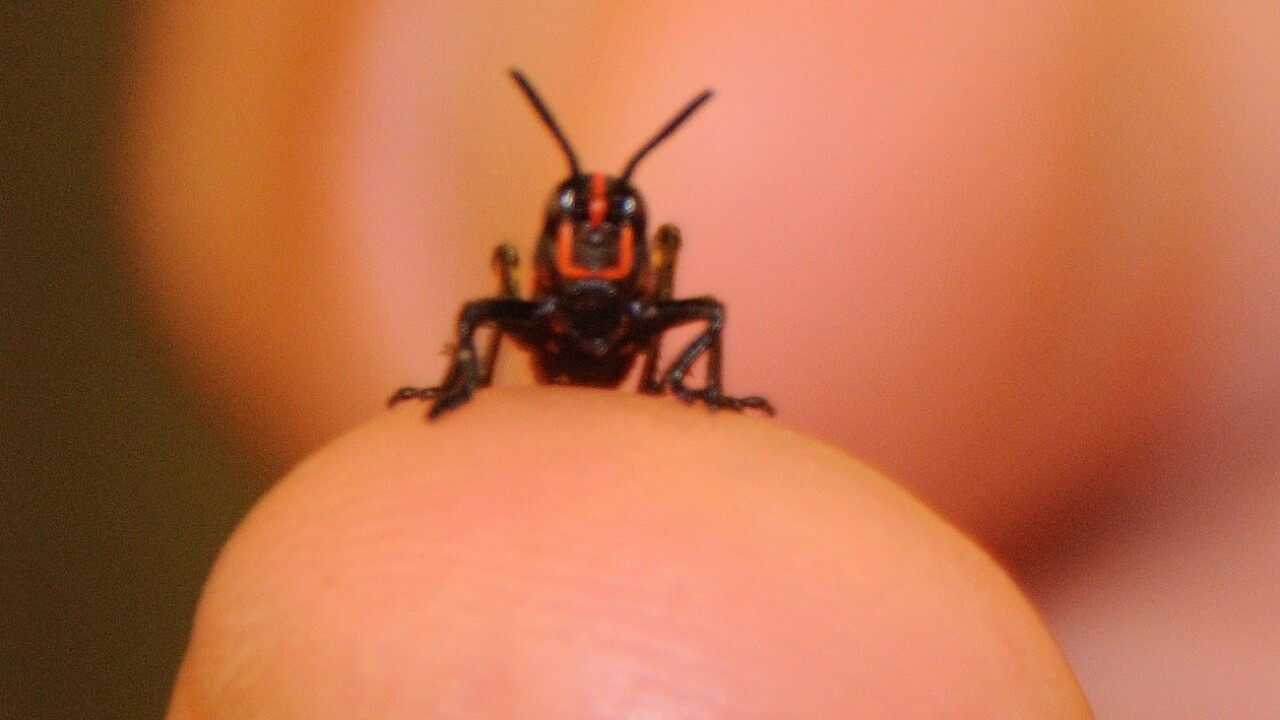 CINCINNATI — While it’s still early in the year, we should all consider a resolution to be kinder to some of nature’s smallest creatures. Insects are disappearing from the Earth at an alarming rate, and losing them could endanger all other life on our planet.

In late November, the New York Times Magazine published "The Insect Apocalypse is Here," an article detailing several global studies that showed an 80 percent decrease in native insect populations during a 30-year period. The article also discussed possible cataclysmic ramifications, a collapse "spiraling from predators to plants," if the trend continues.

According to Cincinnati Zoo & Botanical Garden Director Thane Maynard, although Tri-State residents may have noticed a surfeit of mosquitos or ants this past summer, insect diversity locally and globally is diminishing.

The data should be a wake-up call for people, Maynard said, since insect depopulation is comparable to the "canary in the coal mine."

“If you went to Burnet Woods and all the mammals disappeared, no more squirrels, bats or foxes, Burnet Woods would still be Burnet Woods, but you pull every insect out of there and it will shut down,” he said. “Insects run the world. They’re the decomposers, the pollinators, they’re the major part of the food chain. The natural world’s not going to survive without insects, so it’s a big alarm.”

According to the Cincinnati Zoo's World of Insects curator Winton Ray, the decline in the insect population is due to several factors: habitat loss, climate change, different weather patterns, pollution, heavy use of pesticides, invasive species of plants and other insects, and the introduction of non-native plants.

Ray said the negative numbers come as no shock to those who study plants and animals, since few species have increased in numbers during the last century.

“Insects, like all animals, are getting it from all sides. I just think because there are so many and there tend to be so many, the average person hasn’t noticed. But they will, unfortunately,” he said.

Unlike the decimation of many species of plants and animals, Maynard said the world will reach a pivotal point where our society will have to take notice and address insect depopulation. He said people need to be proactive and nurture nature, explaining that even subtle changes can make a big difference to the survival of local species, including pollinators such as bees and monarch butterflies.

He said over-development, along with humans' obsession with perfect lawns, has reduced a large number of native plants vital to insects.

“All you need is a tiny patch of land for these native plants, and it requires very little maintenance,” Maynard said. “We’re still early in the curve, so there’s far more destruction than helping. Habitat restoration will be a big project to turn things around and keep this system going.”

Both Maynard and Ray agreed that it’s not too late to turn the tide. In additional to conducting programs educating locals about native plants and pollinators, Ray said, the zoo participates in projects reintroducing the American burying beetle, as well as other species of native insects, back to the region. Ray said he’s encouraged by the groundswell of interest, especially in pollinating plants.

“In some ways it’s an easier thing for people to wrap their arms around, because a pack of gray wolves need hundreds of square miles of territory, but you can support monarch butterfly conservation in a small patch of land by planting milkweed and planting host plants,” he said.

Although repopulation is the focus for many in the scientific community, Google’s parent company, Alphabet Inc., is heralding the rapid decline of an aggressive variety of mosquito in California's Fresno County as a reason to celebrate. Bloomberg reported in late November that Alphabet’s research and development company Verify sterilized male mosquitos with a type of bacteria and then rereleased them, causing their offspring eggs not to hatch.

Ray cautioned against altering a species or introducing other species as a form of control, even with the best of intentions. He used the example of the cane toad, which was introduced in Australia to eradicate pests. Because the poisonous toad had no natural predators in the continent, it reproduced exponentially, decimating both animal and plant life.

“The introduction of genetically modified animals, the introduction of invasive species to control other animals -- there’s a long history of those and introductions not achieving the desired outcome,” he said. “Mosquitos are one of those animals that I think even some entomologists will throw up their hands and go, 'I’m not sure what the grand purpose is, but they’re part of an ecosystem.'”

Maynard said even he comes to the defense of the tiny bloodsuckers despite nearly dying of malaria from a mosquito bite in 1996. He said there wouldn’t be so many of them in the world if they didn’t serve some sort of purpose. When looking at species that affect other species, ironically, the most detrimental are people.

“We’re the ones that are tipping the balance,” he said.

Maynard said the key is conservation of the world’s wildlife. He said he’s encouraged by reports that last year Great Britain reduced fossil fuels, creating a smaller carbon footprint. In the United States, he said, somehow conservation became politicized, with going green portrayed as being bad for business.

He pointed out, however, that the Cincinnati Zoo radically cut expenses by reducing water and power usage through conservation efforts.

Ray added that simple efforts like turning off lights and running hoses, using energy-efficient appliances and taking advantage of natural resources like solar energy and rainwater became a game changer at the zoo. Despite adding dozens of extensive water features during the past few years, he said, the zoo reduced its water usage by 1.5 billion gallons since 2006.

“It’s leading by example,” Ray said. “It’s not just the Cincinnati Zoo preaching to everybody else to be conservative with resources. It’s us doing it and saying, 'Look, you can do it, too.' So that’s definitely a positive.”