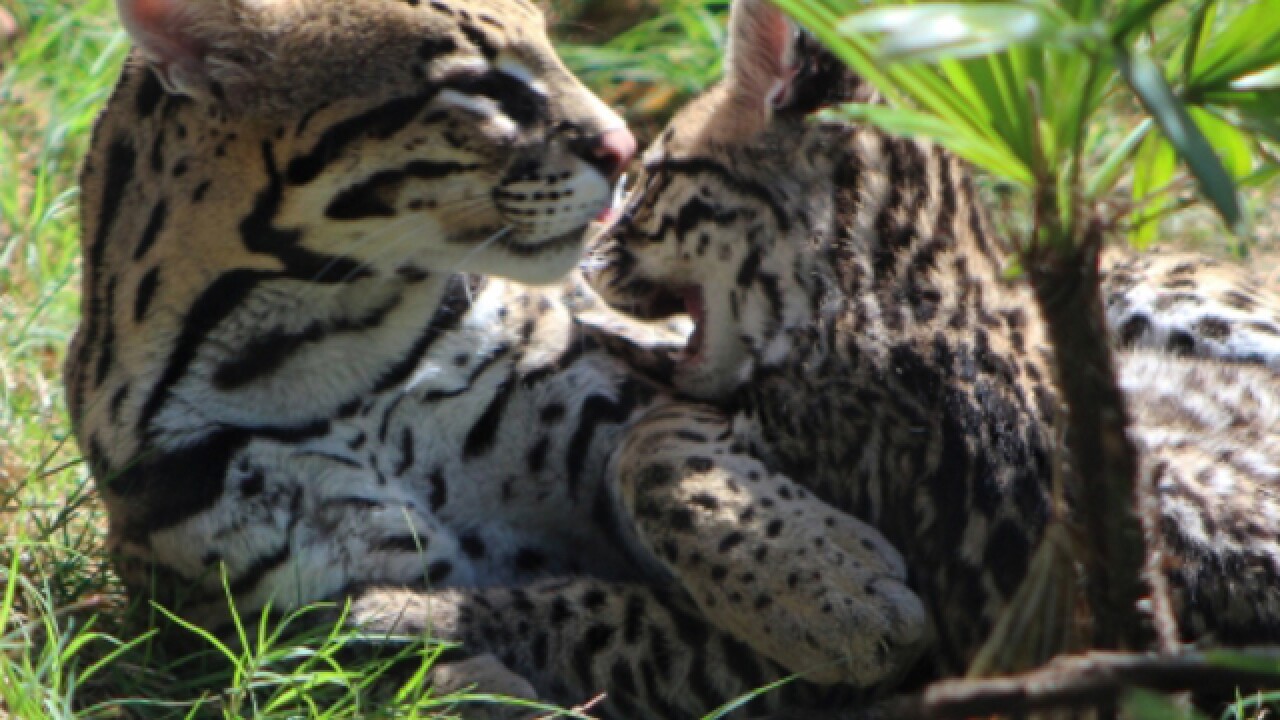 The future looks brighter for Brazilian ocelots, thanks to efforts by Center for Conservation and Research of Endangered Wildlife  at the Cincinnati Zoo.

Since 2010, three female ocelots -- Milagre, Ayla and Revy -- produced using CREW’s artificial insemination techniques have all gone on to naturally breed and give birth to kittens of their own. Most recently, Cincinnati Zoo alum Revy gave birth to a kitten after being relocated to the Santa Ana Zoo.

Only 30 of the cats exist in captivity in U.S. zoos.

“Our objective is to use AI when necessary to produce offspring that then can breed on their own,” he said. “And we’re only now getting to the point where AI’s actually being used for population management in these small cat species — and that’s a really significant step.”

With so few Brazilian ocelots in captivity, Swanson said, it becomes challenging to find viable mates. In the case of Revy’s mother, Sala, Swanson said they first attempted to breed her with a male from a Canadian zoo for four years. Unfortunately, the pair disliked each other intensely, fighting every time they were put together.

“We tried to breed the pair naturally over and over again and it wasn’t possible,” he said. “The only way we were going to get Sala to produce a kitten was artificial insemination. Ideally, we could get these animals to be compatible with each other, but the reality is when managing a small population, you don’t have a lot of mate choice.”

Once Revy turned a year and a half old, the Ocelot Species Survival Plan recommended moving her to the Santa Ana Zoo to breed with their genetically viable male, Diego. The pair hit it off, going on to produce a kitten, Neto, this past December.

Swanson said the Species Survival Plan would like to increase the number of Brazilian ocelots in captivity from 30 to 125.

Since only North and South American zoos house the species, Swanson said, reaching that number presents its share of challenges. Importing ocelots from Brazilian zoos faces a myriad of restrictions, he said, so the answer may instead lie in importing genetic material, such as ocelot semen.

While using frozen sperm is still in the developmental phase, he said, the practice would help bring diversity in breeding necessary to keep the species healthy.

“One of the advantages with the ocelot population is we’ve had a lot of success with AI primarily with non-frozen sperm, and if we get that to work, it gives us the option of moving genetics internationally, such as frozen semen and not living cats,” he said.

Last year, CREW produced two domestic kittens using frozen or vitrified semen. While the technique hasn’t been used for other species of cat, Swanson said, they’ll continue to refine the procedure, which would ideally allow them to collect genetic material from ocelots in other zoos and in the wild.

“That’s what we’re working towards, but I think that initial step is just being able to do artificial insemination with non-frozen semen successfully and have those animals be able to go on and breed on their own,” he said.

Funding for AI research comes from both the Institute of Museum and Library Services and the Small Cat Signature Project. Swanson hopes to parlay success from ocelots to their other species, including the black-footed cat, the fishing cat, the Pallas cat and the sand cat. As with ocelots, Swanson explained, very few small cats are housed in zoos around the world, since they don’t possess the curb appeal of mega vertebrates such as tigers, elephants and giraffes.

As one of the world’s authorities on breeding endangered small cats, Swanson is currently working with Association of Zoos and Aquariums institutions, as well as zoos globally to commit both space and additional resources for small cat preservation.

“I think with all the small cats, we’re in the same dire situation, in that we have a small population that are not genetically viable right now — certainly not by natural breeding alone,” he said. “But by partnering with European zoos or Brazilian zoos and getting things like artificial insemination to work more effectively, we can raise those populations up in captivity where they’re a lot more sustainable. And that’s really our goal.”