New Wings of the World heard the birds' songs 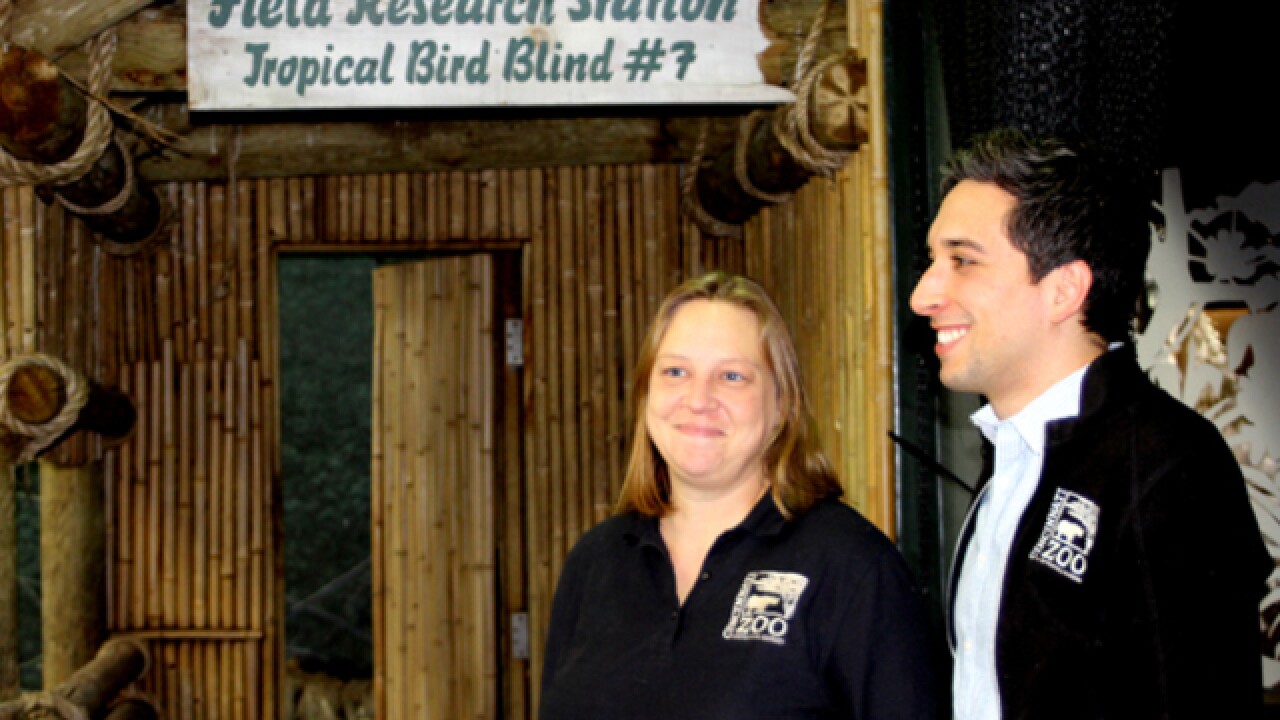 CINCINNATI -- If you're one of the many caretakers at the Cincinnati Zoo, how do you communicate with animals about their needs, likes and dislikes when you obviously don't speak their language?

For the last year, Orban and other caretakers have been keeping a closer eye on subtleties, examining animals' preferences, individual needs and interaction with each other and their environment. Through evidence-based, behavioral research, Orban says, they're able to up their game for animals to have the best possible experience in their home.

"We have a great team here, we have awesome nutritionists, and, obviously, we have an amazing animal care staff who are doing really great things for the animals and their environment," he said. "But we're also now trying to put together some evidence of what are the animals trying to tell us in return."

During the past year, they've made some minute changes that yielded great results. For instance, in order to make new female polar bear Anana more comfortable with male roommate Little One, they added scents of other polar bears to the habitat, which helped the pair bond.

Even lighting can be a big factor, he said, especially in the case of the renovation currently underway on the Wings of the World bird house.

"We took 190 light measurements in December before the renovation started," he said. "We want to monitor different points in the habitat, especially where the birds like to perch by the windows or over maybe near the pathway -- what is their visual perception? So as we're designing lights in addition to increased natural lighting (we're looking for what) will benefit our birds most."

While the refreshed facility will be more aesthetically pleasing for guests, some of the biggest changes can be perceivable only through the eyes of its feathered residents. Orban explained that birds have a second set of cones in their eyes that allow them to see ultraviolet light (UV) in addition to the three primary colors of red, green and blue that other animals and humans see.

"They see changes -- brightness, saturation, hue, color, contrast between colors -- which is really important to them when they're flying through an environment, foraging and avoiding prey," he said. "It actually has a lot to do with mate choice, rearing of young and recognizing eggs. A lot of studies have found that UVA reflections on their feathers really affect their behavior."

Click here to see how birds see the world.

The Wings of Wonder extreme makeover will be the first refresh in 20 years, said interpretive media manager Shasta Bray. The renovation made possible by both zoo funding and a grant from the Institute of Museums and Library Services (IMLS) will open this spring she said, and will feature far more interactive experiences for visitors. The former facility's message focused on the academics of how birds fly, she said, while the newly enhanced Wings of the World will hone in on conservation and how to be a better bird neighbor to local species.

"Research has shown that just because people gain new knowledge, it doesn't really spur them into taking action for conservation," she said. "So we wanted to look for a different way to try to do that."

The new bright, colorful facility will feature far more hands-on, family-friendly experiences, she said. Visitors will be challenged not only to identify exotic birds, but local ones as well that may be in their own backyard, Bray said.

Visitors will also be able to play the migration game, in which they role-play as a flock of birds trying to survive the journey from South or Central America back to Ohio. The simulation will teach them how to create bird-friendly habitats, spot predators, fly through the zoo's "Watch Out for Windows" experience and successfully migrate to their nest in Ohio. At the conclusion of the game, there's a photo op, one of many, and a chance for visitors to pledge to be more bird-friendly.

"Right before the exit, there'll be another fun photo opportunity called 'Join the Flock,' " Bray said. "There will be a nice mural with a bunch of birds behind and you're part of that flock. And you choose a pledge -- and there are a number of things to choose, like 'We pledge to keep our cats indoors to save birds' or 'We pledge to make our windows bird-friendly,' and then they can share that photo with friends."

The opening of the new Wings of the World will take place this spring, Bray said, which coincides with both the migration of birds back to Ohio and declaration of 2018 as the Year of the Bird by the National Audubon Society.

Once the birds return to their renovated residence, Orban said, zoo staffers will again take light readings, as well as behavioral observations, to make sure conditions are optimal.

"So we'll have this really nice pre-, post-evaluation of different changes that we made and applying evidence to what we're trying to do," he said. "Our goal is the continual upgrade of our older infrastructure, and we're trying to provide the best possible care for our animals by constantly improving."