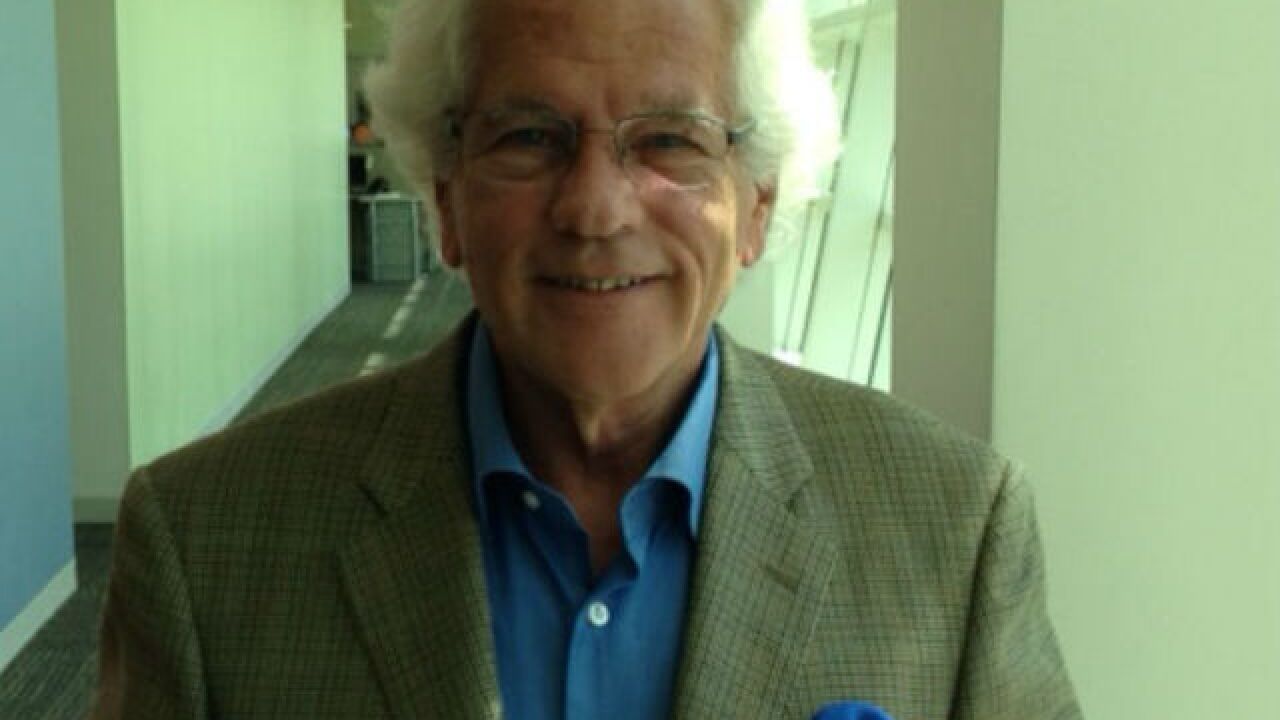 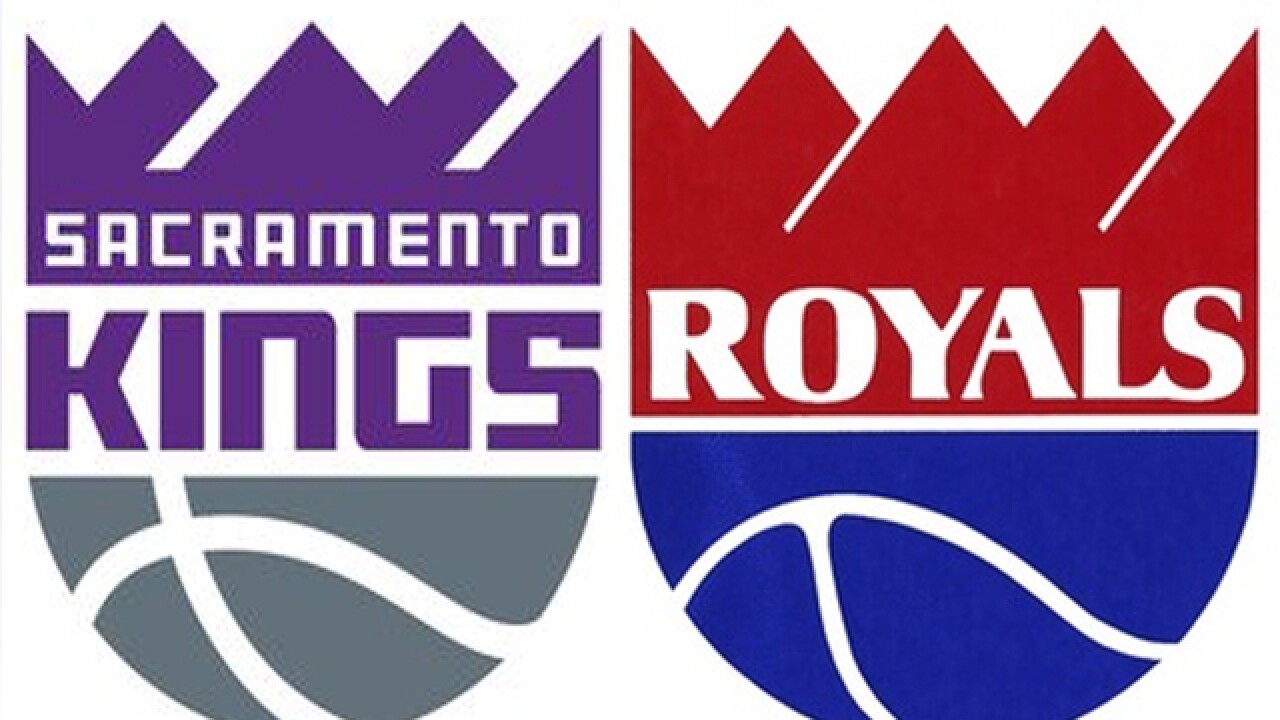 Robert Grove, a Montgomery resident, created the basketball and crown logo for the 1971-72 NBA season – the final season the Royals played in Cincinnati before the franchise moved to Kansas City.

More than 45 years later, some remnants of Grove’s work have been on display in the Legends Museum at the Gardens. The Port of Greater Cincinnati Development Authority closed on its purchase of the Gardens July 21 and the arena will likely see the wrecking ball.

RELATED: Royals legends reflect on their days at Cincinnati Gardens.

However, the Royals logo continues to live in the NBA today if you look close enough.

The Kansas City-Omaha Kings used the red, white and blue logo in the 1972-73 season until the franchise was only in Kansas City a few years later. It eventually moved to Sacramento in 1985.

The Sacramento Kings used Grove’s logo until 1994 when it changed its emblem to a basketball and lance with a different color scheme.

However, Grove’s Royals logo resurfaced in the this spring, weeks before the Gardens was sold to the Port Authority.

The Kings unveiled a new set of purple and gray toned logos in April that includes the retro design of the Royals insignia from its origin of its final season in Cincinnati. The five points in the crown represents the five starting players.

Grove said in 1971 the new insignia gave the Royals “more class and sophistication.” Now, the Kings are paying homage to its franchise’s heritage with the throwback look.

Uni Watch’s Paul Lukas pointed out the connection with the franchise’s lineage in June. Grove discussed the Royals logo he created unsolicited in 1971 with Lukas in an extensive interview.

“When the Sacramento Kings unveiled their new logo in late April, it marked the resurrection of one of the most improbably durable designs in sports history,” Lukas wrote on ESPN.com.

The team has spoken with Grove and there is discussion about inviting him to visit the Kings’ new arena, the Golden 1 Center, this fall.

“I don’t have an update on when Bob will be visiting Sacramento, but I’ve had the pleasure of talking to him and know he is excited,” said John Jacobs, Sacramento’s public relations director.

Grove, 70, is flattered by the attention. He never intended to continue creating logo designs for pro sports teams, but he’s happy the Royals logo is receiving a rebirth of sorts.

The irony is not lost on Grove for the simple fact his logo will see the opening of a new arena in Sacramento while the 67-year-old Gardens is in its final days.

“I’m hopeful — as I am sure that many other people are — that they are able to keep and preserve some of that stuff including some of the architectural stuff,” Grove said. “…It would be nice to see them honor the history that was there. It wasn’t just basketball. There was a lot of history there.”

Grove worked on several other notable graphic design projects in his career including Reds informational designs at Riverfront Stadium for the city’s bicentennial in 1988. Grove said he designed the original Uno game deck of cards and package for the Robbins family in Reading.

“It’s now published in 25-plus languages and is my most widely published design,” Grove said.

Grove has most recently worked on nonprofit projects. The Lima native and 1969 University of Cincinnati graduate said the Royals logo gave him confidence early in his career.

The original Royals logo was a smiling global face with the city’s skyline as the crown in blue and white. It was designed by the late Enquirer cartoonist Harold Russell. In 1971, Grove felt the logo needed an update.

“That original Royals logo was used from their first season in Cincinnati (1957-58) through the 1970-71 season,” said Gardens historian John Perin. “It appeared on various items such as pennants. In the team’s last season, 1971-72, team management was pushing the idea of the ‘running Royals’ under (head coach) Bob Cousy and went for the new logo with the blue basketball and red crown with ‘Cincinnati’ above the crown.”

Grove turned in the design in person to the Royals having no inclination the team would move after the season. The team announced the new logo in April 1971.

Grove’s design was scheduled to be used on uniforms, stationary and car decals starting in time for the first regular-season game Oct. 12 against the visiting Atlanta Hawks.

For his creative efforts he received two season tickets that were left for him at roll call at the Gardens. He sat about five rows up from the Royals' bench that final season at the arena.

“We think this new insignia really updates our image,” Royals General Manager Joe Axelson told the Lima News at the time. “It gives the club a more modern approach.”

The Royals considered the new logo for four weeks, according to the Lima News, but Grove doesn’t recall any competitors. The logo fit the team's desire to project an image of youth entering Cousy’s third year as head coach (Cousy, 87, is no longer giving media interviews, according to a Boston Celtics spokesman).

The updated logo didn’t change the win-loss results that season. The Royals finished third in the Central Division of the Eastern Conference with a 30-52 record, according to Basketball Reference.

Royals guard/small forward Tom Van Arsdale scored nine points in that final home game. He played 4 1/2 years with the Royals and was a three-time All-Star. Van Arsdale, 73, lives in Arizona but still has fond memories of Cincinnati.

"When I think of the Cincinnati Gardens I think of an old facility that had some charm," Van Arsdale said. "...I do remember the ambience was very pleasing."

Grove said the Gardens was active for much longer than many of its predecessors, but hopes the arena's legacy will be remembered.

“It’s kind of an odd coincidence in my case that it’s coming down now and the logo is moving on to a new building,” Grove said. “So I guess I can say the logo outlived the building.”