Cincinnati Opera: 'Another Brick in the Wall' will remind you of a rock concert (just not as loud) 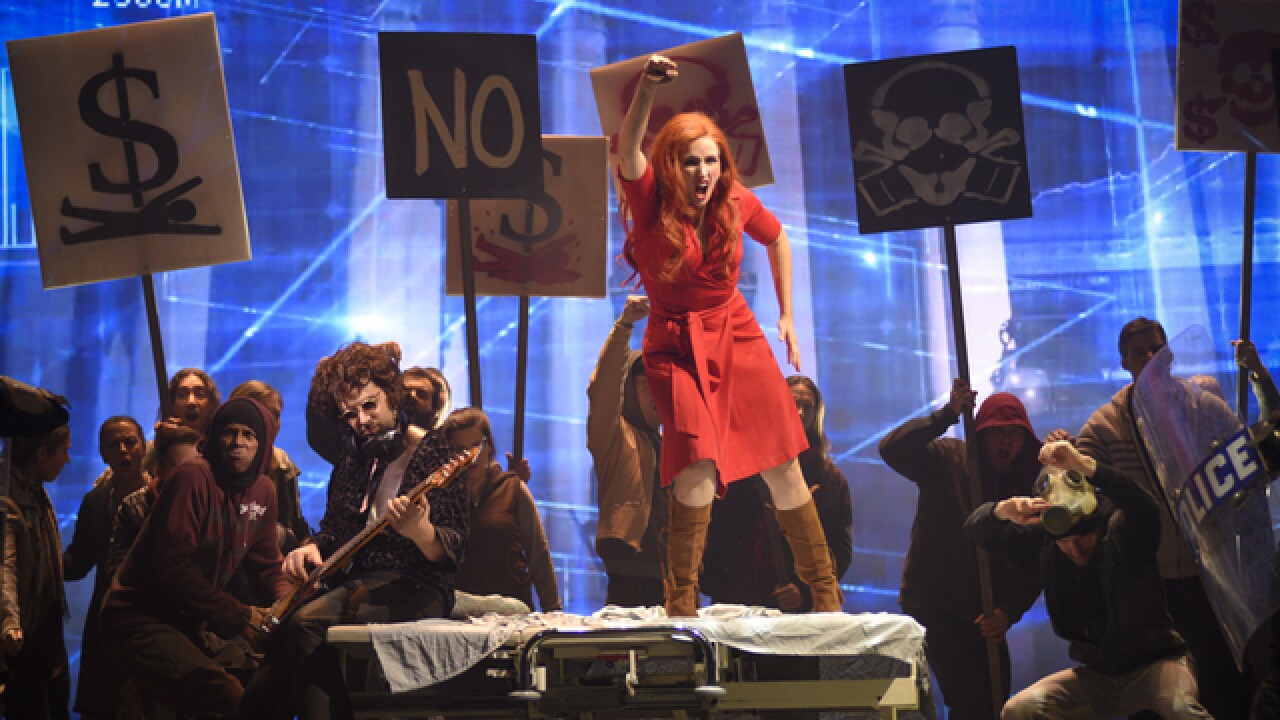 Copyright 2018 Scripps Media, Inc. All rights reserved. This material may not be published, broadcast, rewritten, or redistributed.
<p>Pink (Étienne Dupuis, seated left) lends his support as his wife (Caroline Bleau, center) leads a protest against the financial world in "Another Brick in the Wall." Cincinnati Opera will present the U.S. premiere at Cincinnati Music Hall. (Photo by Yves Renaud/Opéra de Montréal.)</p>

CINCINNATI -- The U.S. premiere of “Another Brick in the Wall,” an opera based on Pink Floyd's “The Wall,” is the attention-grabbing production at the center of Cincinnati Opera's 2018 season.

But as it returns to the newly renovated Music Hall, Cincinnati Opera is offering a slate of performances that show off the talent and innovation of the 98-year-old company. Anchored by classics like “La Traviata” and “The Flying Dutchman,” the summer season also includes an intimate chamber opera about a transgender woman, a historical opera of passion and politics and, of course, the adaptation of Roger Waters' rock opera.

Cincinnati Opera co-produced “Another Brick in the Wall,” which had its world premiere in Montreal last year, with Productions Opéra Concept MP. The show was the dream of Pierre Dufour, former general director of Opéra de Montréal.

He's not alone. “The Wall” is a touchstone for multiple generations — baby boomers, Gen X, millennials all know those songs, Mirageas said. That's what makes it an ideal opera.

“When people come to opera for the first time, they're often brought in by a familiar title,” Mirageas said. “But we’re really excited about new works because younger people will give them a try … When you come to see 'Brick,' you’ll think you’ve come to a rock concert — just not quite as loud. There are amazing visual and video components. The entire experience is extraordinary.”

Waters told Rolling Stone he originally resisted Dufour's idea to make an opera of the album, saying any time rock ‘n’ roll is translated to opera the results are ridiculous. That simply gave Dufour parameters for the project: It had to be a traditional opera.

With Waters' blessing, the production moved forward, and audiences came out in droves to see it. Dufour quit Opéra de Montréal to continue producing “Brick.”

“People were rediscovering the story, the piece, the lyric,” Dufour said. “Sometimes hearing it, really, for the first time. Or they were really quite amazed at how deep was the wording in that piece. “Opera is sung theater.

"In opera, you put emphasis on music, staging and words as well,” Dufour added. “People were really quite happy to rediscover the words of Roger Waters. I really believe this piece is timeless.”

In Montreal, the opera sold 30,000 tickets, and Dufour said about 56 percent of attendees were not in the Canadian company's database of patrons — meaning they were new opera-goers. About 3,000 people came from outside the country to see the show.

Cincinnati Opera is waiting to see if the opera produces similar results in the Queen City. The whole season is a chance for longtime Cincinnati opera fans to see if the new-and-improved Music Hall, with its more intimate seating and upgraded bathrooms and lobbies, has retained its award-winning acoustics.

“You’ll be able to make up your mind yourself. Does this remind you of the best of the old Music Hall and also show off some of the new features?” Mirageas said. “For example … there's no bigger music than Wagner, so doing 'The Flying Dutchman,' it's a way for us to say, 'Can Music Hall take all we've got?' Can we do this big blowout piece and make it amazing? “I think the answer is going to be yes.”

And if you're new to opera, Mirageas said there's no better season to start going. Tickets for all shows are available online.

What: One of the great traditional operas, this lavish production of Verdi's classic will show off the best of Cincinnati Opera as it returns to a more intimate, still acoustically stunning Music Hall.

‘The Coronation of Poppea'

What: This opera is 375 years old, but its story of politics and passion feels as relevant as ever.

What: Wagner's eerie folktale gets a modern update with visual projections for a production that will fill Music Hall with sights and sound.

‘Another Brick in the Wall’

What: The U.S. world premiere of the opera based on Pink Floyd's iconic 1979 album, “The Wall.” It's a traditional opera that still makes you feel like you're at a rock concert.

Where: Wilks Studio in Music Hall

What: Two singers and a string quartet tell a transgender woman's coming-of-age story in an intimate space where no seat is more than 20 feet from the performers.