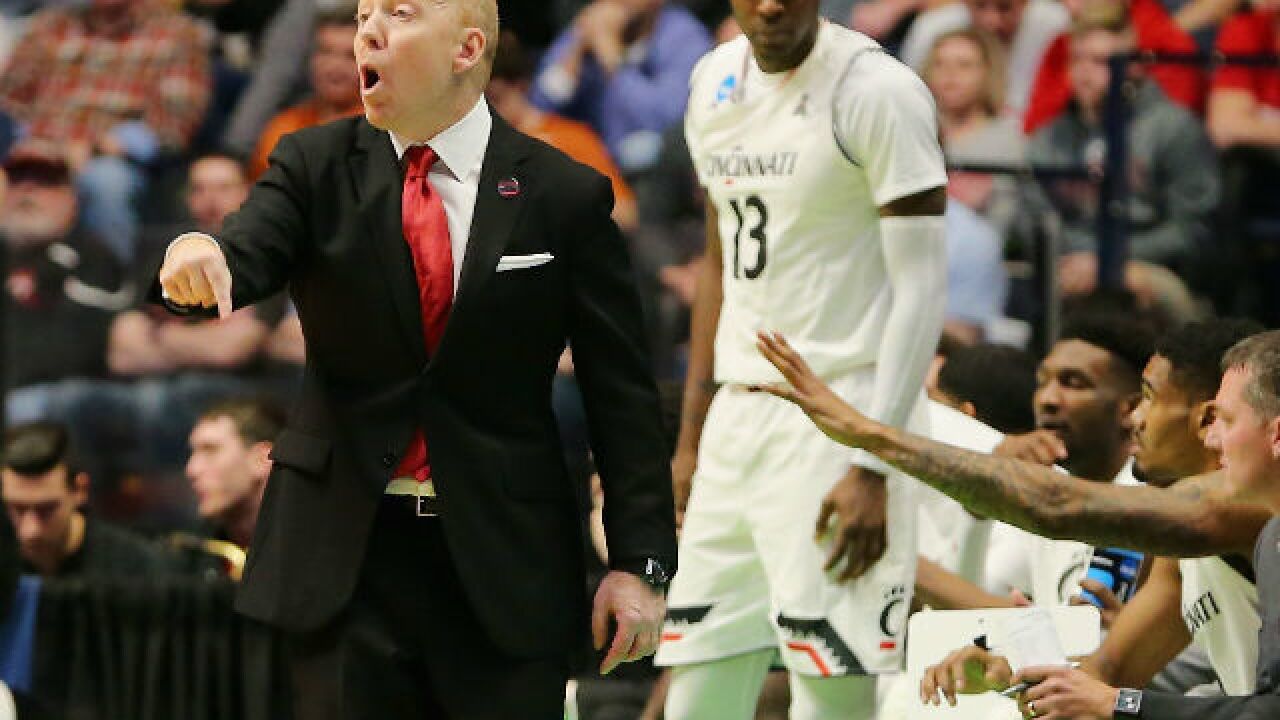 Image copyright 2018 Getty Images. All rights reserved. This material may not be published, broadcast, rewritten, or redistributed.
<p><br /> NASHVILLE, TN - MARCH 16: Head coach Mick Cronin of the Cincinnati Bearcats reacts against the Georgia State Panthers during the game in the first round of the 2018 NCAA Men's Basketball Tournament at Bridgestone Arena on March 16, 2018 in Nashville, Tennessee. (Photo by Frederick Breedon/Getty Images)</p>

NASHVILLE, Tenn. – Just call it the “Parting of the South Region”.

In the wake of the University of Maryland Baltimore County’s historic upset of No. 1 seed Virginia on Friday night and losses by No. 3 seed Tennessee and No. 4 seed Arizona, the second-seeded Cincinnati Bearcats own the only remaining top 4 seed in the region.

On one hand, the Bearcats can now visualize a clearer path to the Final Four.

On the other hand, the upsets can serve as a cautionary tale, not just for the Bearcats, but for any teams remaining in the tournament, including top seed Xavier, also playing in Nashville.

“I say this with all due respect, I think every region is open,” Bearcats coach Mick Cronin said. “Every year, whether we're an eight seed, or a six seed, everybody puts their pants and shoes on the same way. I try to build my program not to take a back seat to anybody.”

Lose, and it will be opportunity lost for UC.

“If we look past Nevada, that would be our first mistake,” said Bearcats forward Kyle Washington. “If you look past anything, you could fall short. In this tournament, you don't get a second chance.”

If Cincinnati wins on Sunday, No. 5 seed Kentucky is the highest seed the Bearcats could face prior to the Elite Eight. The Wildcats are much improved compared to even three weeks ago.

UC would be headed to a Sweet 16 matchup with No. 11 seed Loyola of Chicago in a half-century-ago rematch of the 1963 championship game. The Bearcats of George Wilson, Ron Bonham, Tom Thacker, Tony Yates and Larry Shingleton had won two straight titles but lost to the Ramblers in overtime after blowing a 15-point  lead.

Back to the present, Cronin said  he isn’t concerned about reaching the Sweet 16, or even the Elite Eight, and joked that those pats on the back should be reserved for the team banquet.

The Bearcats, who defeated No. 15 seed Georgia State 68-53 on Friday, have plenty of reasons to be wary of Nevada.

The Wolfpack rallied from a 14-point deficit in the second half, and then again after trailing by four points in overtime, to beat Texas, 87-83.

Cronin said he wouldn’t necessarily go with a smaller lineup to combat Nevada’s strengths on the perimeter, but it is an option.

“We try to adjust as we go,” Cronin said. “Look, Eric (Musselman) is a really good coach. They do a good job figuring out what you're doing and getting the isolation situation that they want. So, I think it will be a game of multiple adjustments. That would only be just one of them.”

Washington, who transferred from North Carolina State after his sophomore season, has a close relationship with the Martin twins, who also transferred. But he tried to downplay that friendship heading into the game on Sunday.

“I don't want to hype them up too much, but they are great players,” Washington said. “They're great competitors. They play extremely hard and they're fierce. I have a great relationship with them. I'm not going to hide. I'm not going to deny it. That's not going to translate when we get in the 94 feet.”

Cincinnati had four players in double figures in its win over Georgia State, led by 27 points and 11 rebounds from sophomore guard Jarron Cumberland. Gary Clark also had a double-double with 11 points and 13 boards.

The Bearcats will need similar offensive balance to ward off the Wolfpack, that and the usual defensive effort.

“I teach my kids that they can be whatever they want to be, whatever they're willing to work to be,” Cronin said. “And they should turn off the TV. People are going to tell them whether they can win or not or how good they are, it's irrelevant. We're worried about Nevada. That's all that matters.”

While the Retrievers’ epic victory has created an opportunity for the Bearcats to advance deeper in this year’s tourney, it also can serve as a wake-up call.

Washington is familiar with Virginia coach Tony Bennett from his days in the Atlantic Coast Conference, and he empathized with the Cavaliers.

“I think it’s one of the biggest upsets in sports history, honestly,” Washington said. “It was just crazy. Tony Bennett is a great coach and a great person. It was shocking. Ryan Odom and UMBC did a great job, and they competed. That’s what the tournament is all about. If you believe you can achieve anything, you can do it.”