Cincinnati astronomer 'keeps looking up' at eclipses 16 years and counting 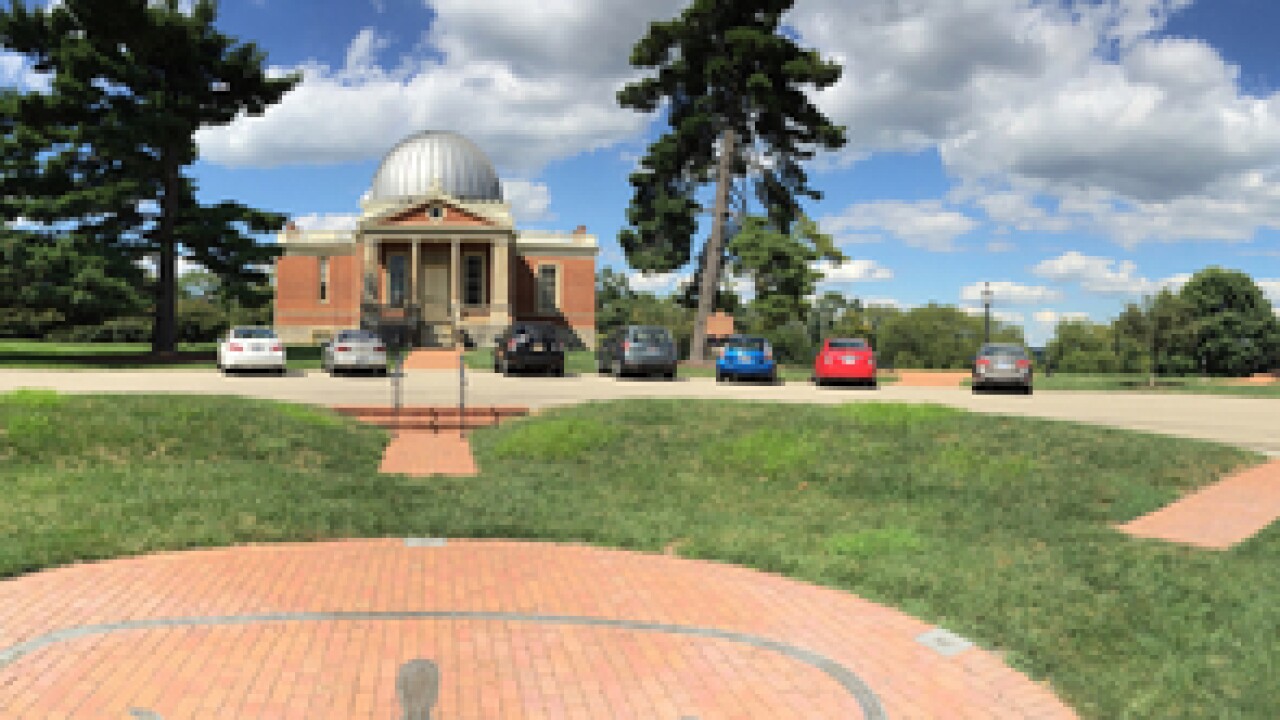 Austin Fast | WCPO
<p>The Cincinnati Observatory houses the world's oldest telescope still in public use (made of Brazilian mahogany in 1845) and a newer, metal model from 1904 in two separate buildings.</p> 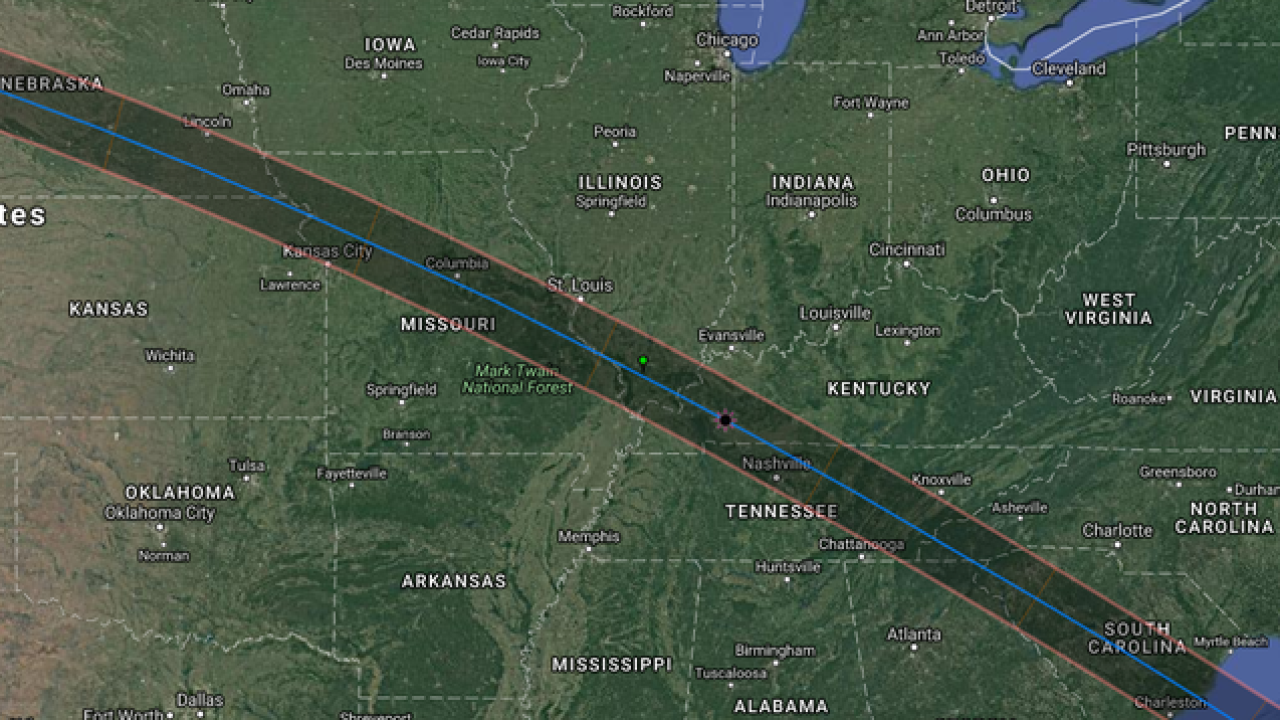 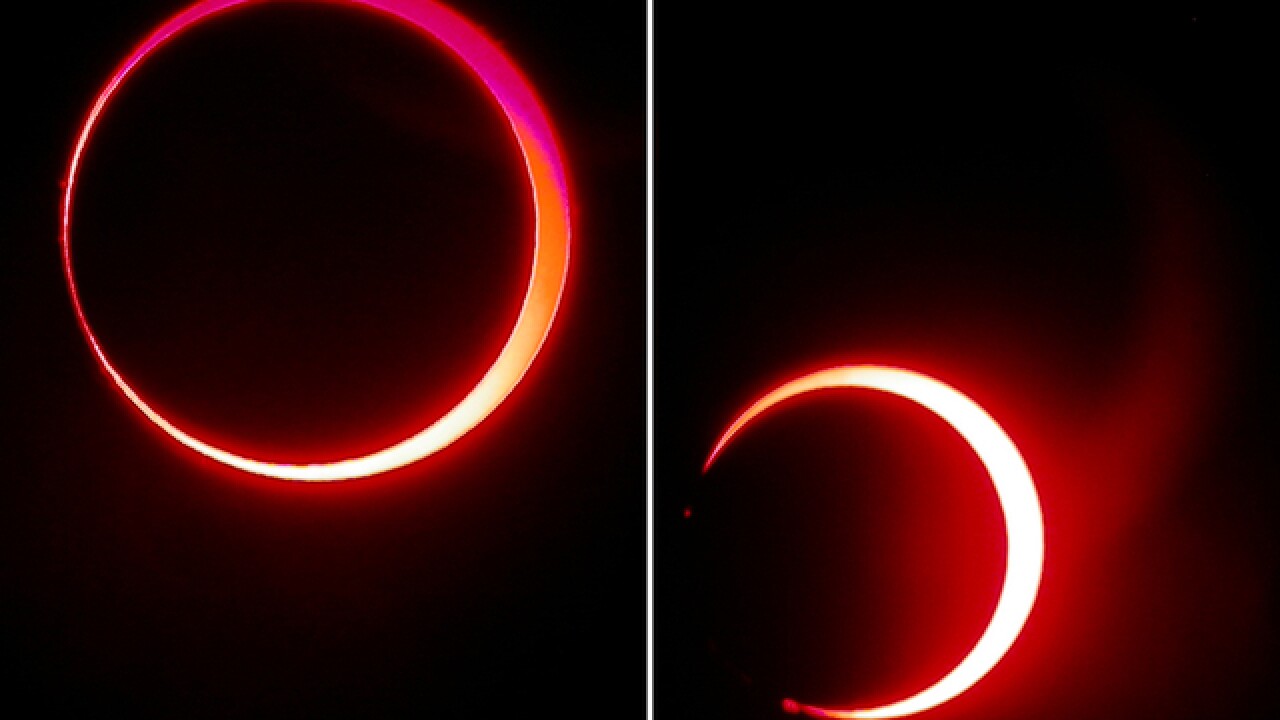 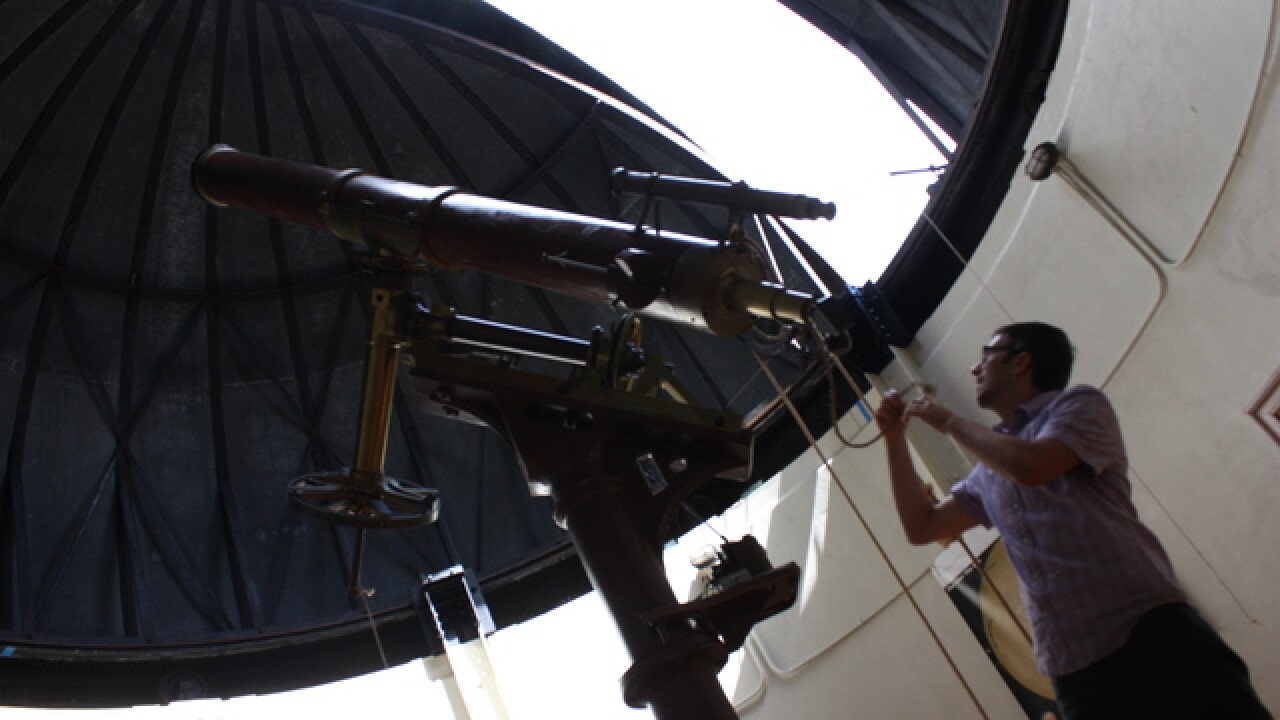 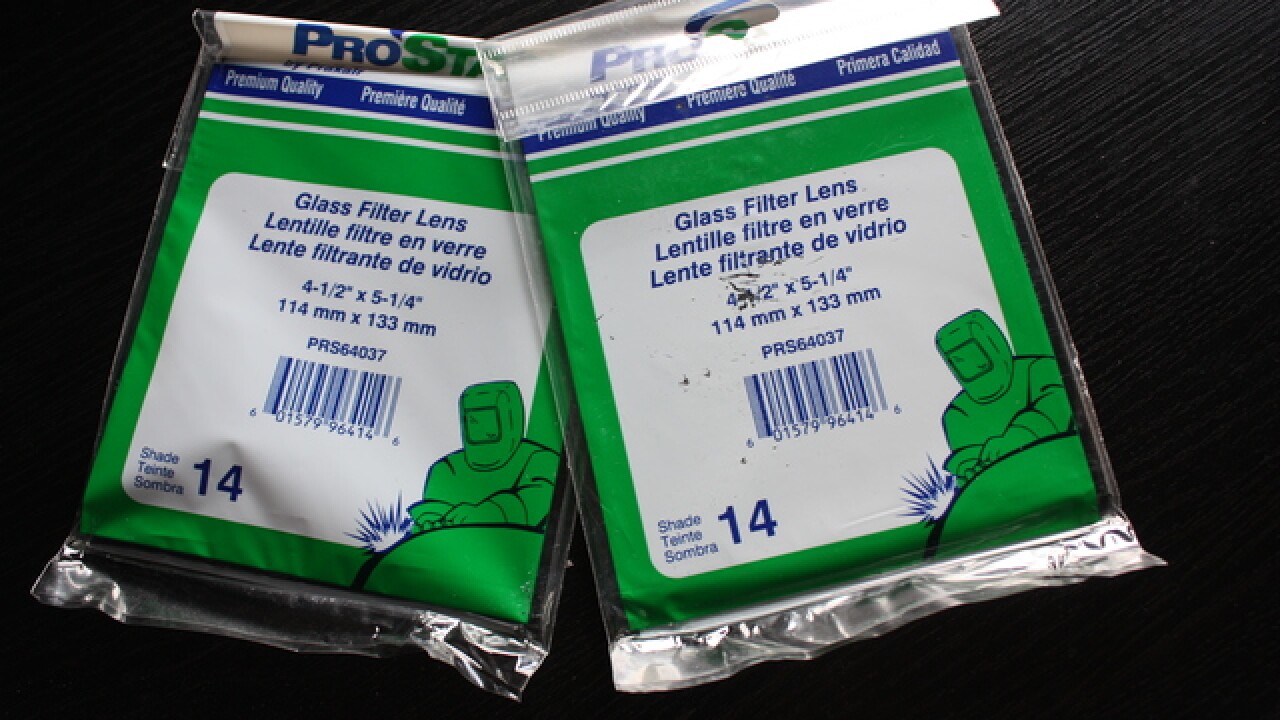 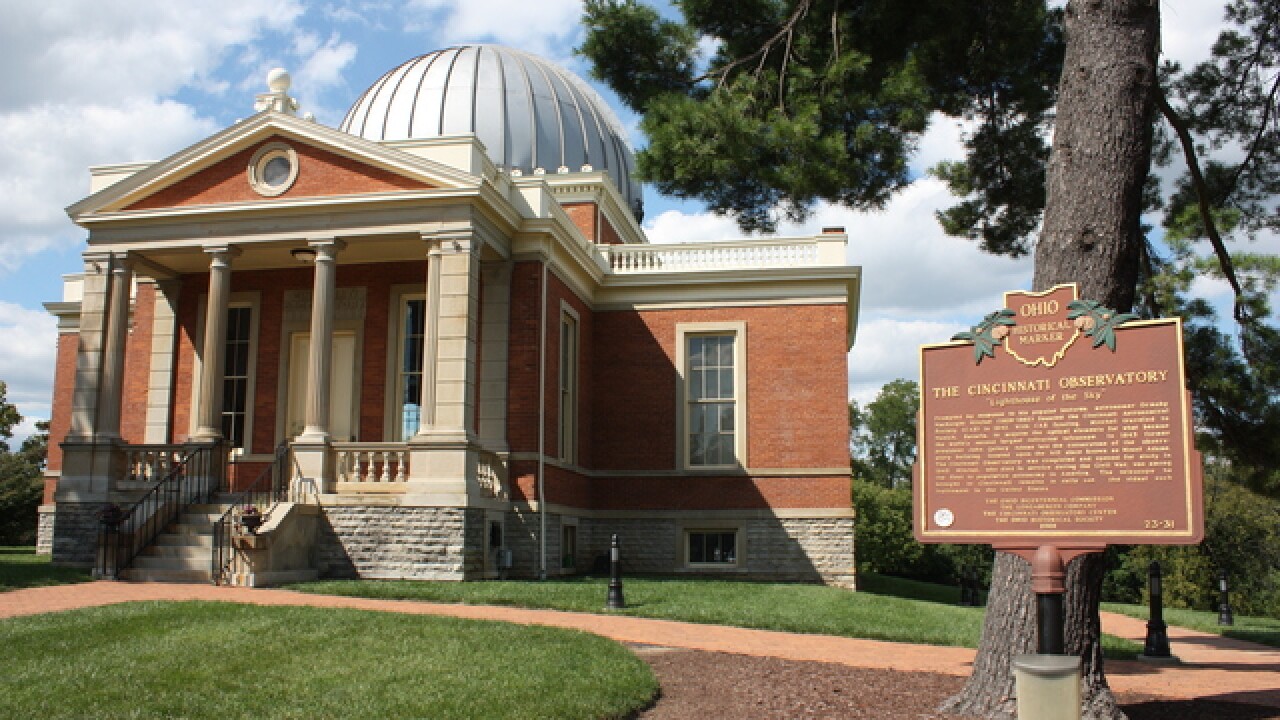 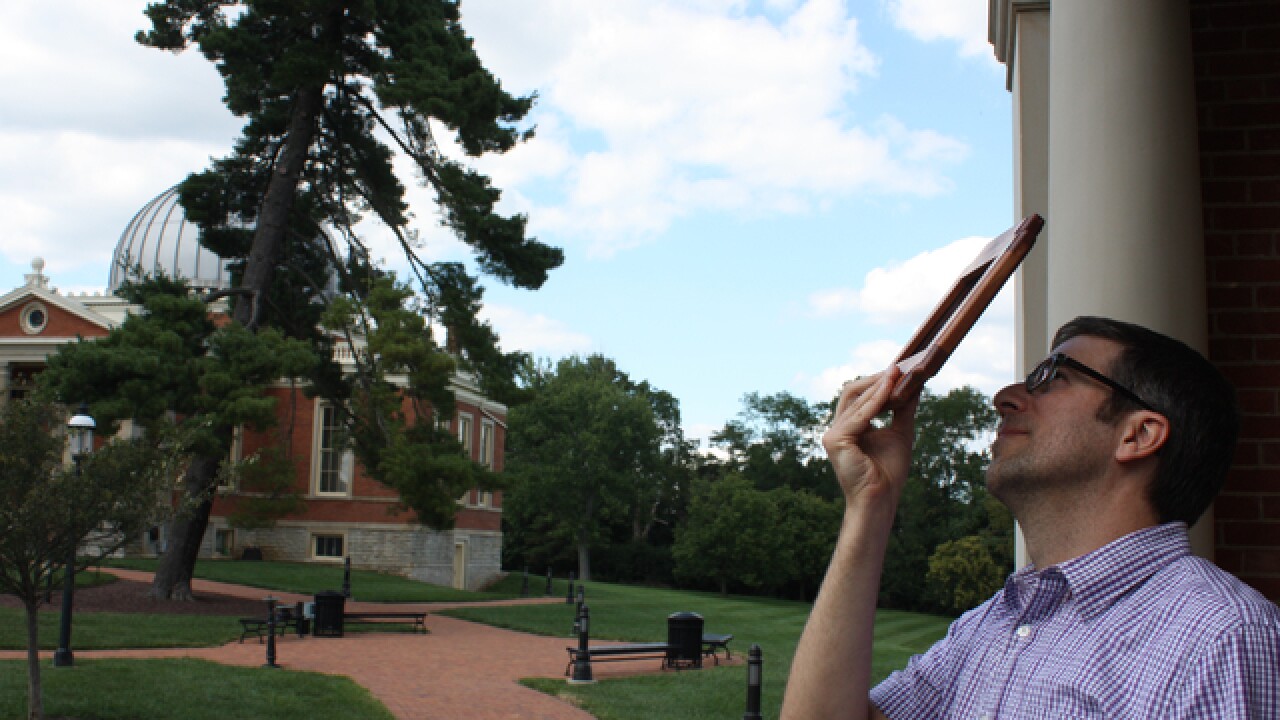 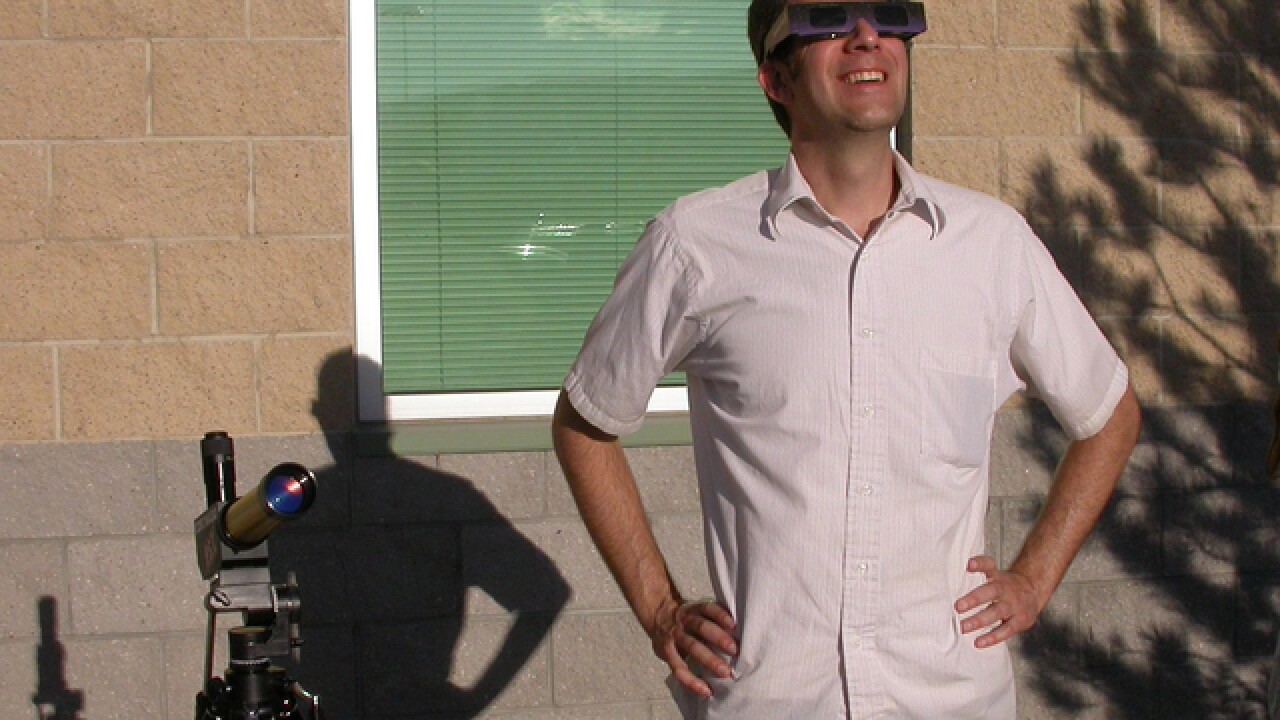 CINCINNATI -- Eleven months feels like nothing when you've been waiting for “the big one” for 16 years.

And it really seems like a blink of an eye when you consider the last time you could witness a total solar eclipse in Cincinnati was in January 1395.

This might help you understand why Outreach Astronomer Dean Regas of the Cincinnati Observatory is already planning for one of the best opportunities this century to see a total solar eclipse throw darkness over America on Aug. 21, 2017 .

Check out presentations, science demonstrations and hands-on activities at noon Saturday at the Observatory during ScopeOut, an all-day and all-night astronomy fair. More details here .

While Cincinnati and Northern Kentucky won’t experience the full effect, a short trip south to Bowling Green, Kentucky, puts you just within the 70-mile-wide shadow cast by the moon with 72 seconds of darkness.

The point of greatest eclipse is located just west of Hopkinsville, Kentucky, where darkness will fall for a full 160 seconds.

Before you roll your eyes and click away, let Regas explain why it’s worth it to journey south for the total eclipse’s eerie effect.

“You look up where the sun was and the moon just perfectly blocks it out and it’s just this black hole up in the sky,” Regas said. “In Cincinnati, we’re only going to get about 90 percent (of the sun) blocked here, so some people are saying, ‘Well, I’ll just stay here and see that and it will be good.’ But a 90 percent eclipse is about 1 percent as good as a total eclipse and seeing the whole thing blocked out.”

Regas has been counting down to what he calls “the biggest astronomical event we’ve had in America in a long time” since he started working at the observatory in 2000. He’s already taken the week off and plans to travel west (perhaps to Nebraska) to observe the event, since he says Kentucky will be an eclipse “hotbed” with hoards of eclipse chasers overrunning small towns. Regas also recommends Wyoming as a prime viewing location with statistically cloud-free days ideal for the early afternoon eclipse.

If you’re a patient homebody, your next best shot is April 8, 2024, when a total solar eclipse passes over Dayton, providing Cincinnati with a near-total eclipse.

That’s the Tri-State's last chance, though, until an annular solar eclipse covers Cincinnati on July 23, 2093. Unless you were born in the past couple years, I hate to break it to you that we probably won’t be around for that one. Regas explains the differences between partial and annular solar eclipses here.

What does an outreach astronomer do?

“Astronomers are not a dime a dozen. They are a special bunch, and he’s a real treasure,” said Melissa Culyer, who teaches first to third grades at Sands Montessori School in Mount Washington. “He is entertaining enough to hold 50 kids’ attention. There’s a definite love of what he’s doing and it comes through.”

Regas never had childhood aspirations of astronomical greatness. In fact, the plan was to be your run-of-the-mill high school history teacher. That changed when he took a job in 1998 in nature education with the Cincinnati Park Board as a sort of a break after college before diving into a lifelong high school teaching career.

“They had a planetarium there and nobody knew how to run it and they asked – no, they didn’t ask – they told me, ‘You’re running it,’” Regas said. “That was when my conversion happened. I knew this was the coolest job in the world, and I never looked back.”

Through school field trips and public events, Regas and the five other Observatory employees try to put as many people’s eyes as possible on their telescopes to spark interest in looking up.

Ridgeway Elementary in Hamilton was among 40 Tri-State applicants awarded a telescope in 2009 through a Cincinnati Observatory program celebrating the 400th anniversary of Galileo’s first use of a telescope.

Art teacher Terry Haynes-Toney heads up much of their “artstronomy” program that includes a handful of family nights each year.

“It’s hands-on,” Haynes-Toney said. “It’s multigenerational, and reaching across the community brings people together to converse. What do children remember the most? The math assignment they did last Tuesday or the science fair and the art project?”

She’ll be on hand with a booth at the Cincinnati Observatory starting at noon Saturday for ScopeOut , a free all-day (and all-night) astronomy fair that brings educators with science demonstrations and hands-on activities for all ages. A $25 dinner with keynote speaker and $5 nighttime viewing through the telescopes round out the evening.

Alongside all his educational duties at the Cincinnati Observatory, Regas has co-hosted the long-running PBS show “ Star Gazers ” for six years.

“I was up at Alms Park a couple of weeks ago and just walking and this guy in a van yells at me, ‘Keep looking up, man!’ so (getting recognized) does happen,” Regas said.

He plans to keep plugging away at Star Gazers as long as its underwriters keep up the funding. Culyer says she hopes Regas stays at the Cincinnati Observatory for a very long time since “he’d be easy to snatch up” for another observatory.

“This place is really special – there’s no other observatory like this that I’ve been to. And working with the oldest scope in America – you can’t beat that. I think the only thing that would take me away would be a place with better weather,” Regas said.

I can’t imagine why, what with Ohio’s specialty of four seasons in one day.

The nitty-gritty on eclipses (Beware: Numbers ahead)

Even though total solar eclipses occur somewhere on Earth every 18 months on average, Belgian astronomer Jean Meeus estimates any one spot on the planet gets to experience it once every 375 years considering the vast surface area of our planet and the narrow track of the moon’s shadow as it passes over.

That's just an average, and the Queen City is amid a long drought as a total solar eclipse won’t darken skies over Cincinnati until after the year 3000, as calculated by “Mr. Eclipse,” NASA astrophysicist Fred Espenak.

It’s been 22 years since the last major solar eclipse passed over Ohio. It was an annular eclipse, which does not mean it happens yearly contrary to how the word looks.

If you’re on any sort of social media, you’ve probably heard mention of “supermoons” that happen when the moon’s elliptical orbit puts it slightly closer to the earth, making it appear larger. Annular eclipses occur when the opposite happens and the moon is not close enough to fully blot out the sun’s disc in our sky.

The “ring of fire” effect annular eclipses create was fully visible May 10, 1994, both high above the blacktop of my kindergarten playground in northwest Ohio and projected into a cardboard viewing box by our teachers.

Convinced by all-knowing third-graders that looking skyward would burn my 6-year-old eyes out of my head, I frantically shielded them with a hoisted backpack as I made a mad dash to the big, yellow bus after school.

(Disclaimer: While it’s never a good idea to look directly at the sun, Regas assured me an eclipse would not melt them off my face.)

You don’t have to be an astronomy buff to admit that seeing the sky go dark in a total eclipse would be a pretty amazing sight. Since my only experience with a solar eclipse involves being a horrified kindergartner fearing for my ocular health I’m hoping for clear weather next August.

Regas recommends safely viewing an eclipse through a pane of No. 14 welder’s glass, which will set you back no more than $5. Special eclipse glasses are also available for a couple bucks.

“When it’s a total eclipse, that’s the one and only time you can stare at the sun,” Regas said. “You don’t need glasses. You don’t need special filters because you’re looking at the moon primarily. Only this very faint part of the sun (the corona) is visible.”

Here are the details for next August’s solar eclipse:
The total eclipse will reach its maximum at 1:27 p.m. CDT Aug. 21, 2017, in Bowling Green, Kentucky.
If staying in Cincinnati, the maximum partial eclipse will be seen at 2:29 p.m. EDT.