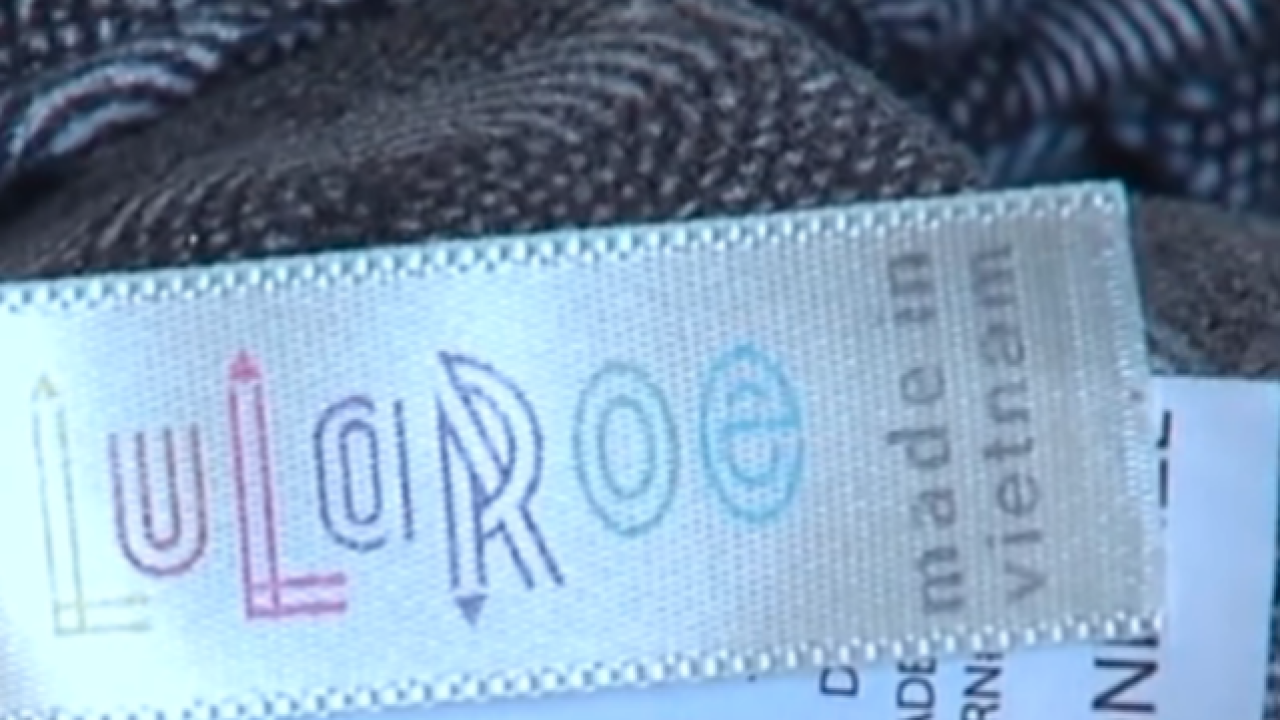 CINCINNATI -- Although LuLaRoe leggings are as popular as ever, multiple lawsuits against the $2 billion company for complaints about pyramid scheme tactics and for a change in company policy regarding unsold merchandise refunds resonate with at least one local seller.

Local LuLaRoe consultant Randi Swanner has struggled with the company from the beginning for many of the issues the lawsuits suggest. She had problems finding people to “host parties” both online and in person, which is a common means of selling for consultants.

“They all turned me down for various reasons. The most common was that they have another friend or family member that sells LuLaRoe and they don't want to hurt their feelings by hosting a party with me. I offered double rewards, did free shipping, nothing was moving my product,” she said

She tried to promote a large fundraiser event and ended up selling less than $100 of product.

“I was bummed, irritated and hurt that my efforts didn’t produce more sales,” she said.

At the time, LuLaRoe required consultants to buy 30 items per month or 90 items in 90 days to stay active, but Swanner was not selling enough to keep up with this rule. One of the current legal complaints against the company is pressuring to continue to sell in a saturated market.

LuLaRoe is currently deemed a multi-level marketing company, similar to Mary Kay, which operates from profiting through product sales. However, the accusations of an illegal pyramid scheme mean that people are questioning the company’s business ethics, including pressure put on consultants to buy more inventory. Consultants also need around $5,000 in start-up costs and initial inventory.

Richard Wayne, a chair of the litigation group at the Strauss Troy  law firm in Cincinnati, has significant experience with complex cases involving similar situations.

He said the main difference between a pyramid scheme and an MLM comes down to whether the company has “real business intent."

“Legally, it’s a question of facts. You look to see whether it is really a business, or recruitment (based), which is pretty generally a pyramid scheme. They are frauds. Once you saturate the market with enough people, nobody will get any money,” he said. “People have taken shots at MLMs saying they are really not businesses, but a lot of them really sell a product and people get paid based on the sale of a product.”

He added that when companies change return policies, like LuLaRoe did in September, people start to question the intent.

“Originally you were able to return products. When you see excuses like, ‘People are returning crappy products,’ you don’t go from 100 to 90 percent refund policy,” Wayne said. “When you start going in that direction, you get the sense that, is it a real product or business operation?”

LuLaRoe stated that the legal actions are all a result of their successful model.

"Our success has made us the target of orchestrated competitive attacks and predatory litigation," according to a LuLaRoe statement reported by CBS News. "We take all litigation – regardless of its lack of merit – seriously ... We will vigorously defend against the (allegations) and are confident we will prevail."

Left in the dark

Swanner looked for other ways to move the product, like selling items at a discount online without posting the discounted prices publicly, which is against the rules for consultants. She sent discount prices to interested buyers through private messaging.

However, it led to the end of her career as a consultant.

“LuLaRoe then asked for me to turn in my resignation. I asked that they send me more information on what rule I had broken. I never received a reply message from compliance,” she said. “I also called (their) home office and asked for a supervisor, I was put through to an answering machine. I left the same message on the supervisor's voicemail that I had written in my reply to the compliance email. I still have never heard back from anyone, and I am still unable to order.”

Other consultants who are going out of business and wish to initiate their refunds have had trouble getting through as well.

Swanner also takes issue with the refund policy change, which she said was “sneaky” because it came without warning and went into effect immediately, in addition to having multiple caveats. She said the company won't accept any products over one year old or ones that come from a special collection, and the inventory has to have been purchased directly from the company, not from other consultants.

“This policy left me in the dark,” she said.

Swanner also was shocked that if the company deemed an item not refundable after it had been shipped back, they would keep the item and donate it to shelters.

“That really must be a joke. I mean, that’s theft,” she said.

'We got really lucky'

On the other hand, not all consultants have had such negative experiences with the company. Former local consultant Dani Taggart sold LuLaRoe for about a year-and-a-half, but ended during the company’s refund sweet spot earlier this year, when consultants were getting 100 percent refunds when they decided to quit.

Taggart had no issues communicating with the company throughout the process of quitting said she understands why the company may have had to change their policy on refunds.

However, Taggart does recall having trouble getting enough inventory, as so many consultants were onboarding into the company.

“Why not take care of consultants who are first?” she said.

Taggart also experienced some pressure from consultants above her to buy enough inventory to get a bonus check, which is one of the allegations in the lawsuit.

“The girl I signed up under would send me an email saying, ‘Remember you are only this far away from your bonus check so order more pieces.’ But the bonus check wasn’t big enough to be worth it,” Taggart said. “I had two people under me so I didn’t get the check if they weren’t ordering more inventory too.”

In the end, Taggart and her husband left the business venture having made a profit and without losing on any returned inventory.

“We got really lucky,” she said.

LuLaRoe fans don’t seem to mind one way or the other, as long as their beloved leggings are still available.

Karen Hoeper of Liberty Township said she knew when she bought her “overpriced leggings” that she was investing in a “pyramid scheme built on supply and demand.”

“It was fun and I liked the product. What isn’t a pyramid scheme these days?” she said. “The people who sell these things know the risks of making money and risks of taking on inventory. It sounds like LuLaRoe may have promised a buy-back that they are not holding up to. That, I do not agree with. But just calling the company a pyramid scheme is weak.”

LuLaRoe responded to Inc.com in an article  about the policy change in September.

“LuLaRoe provides a fair and generous path to Independent Fashion Retailers who want to exit the business,” the company stated. “We are simply reiterating a long-term written policy that each Retailer agrees to when he or she signs up.”