OTR church gym a ticket off the streets 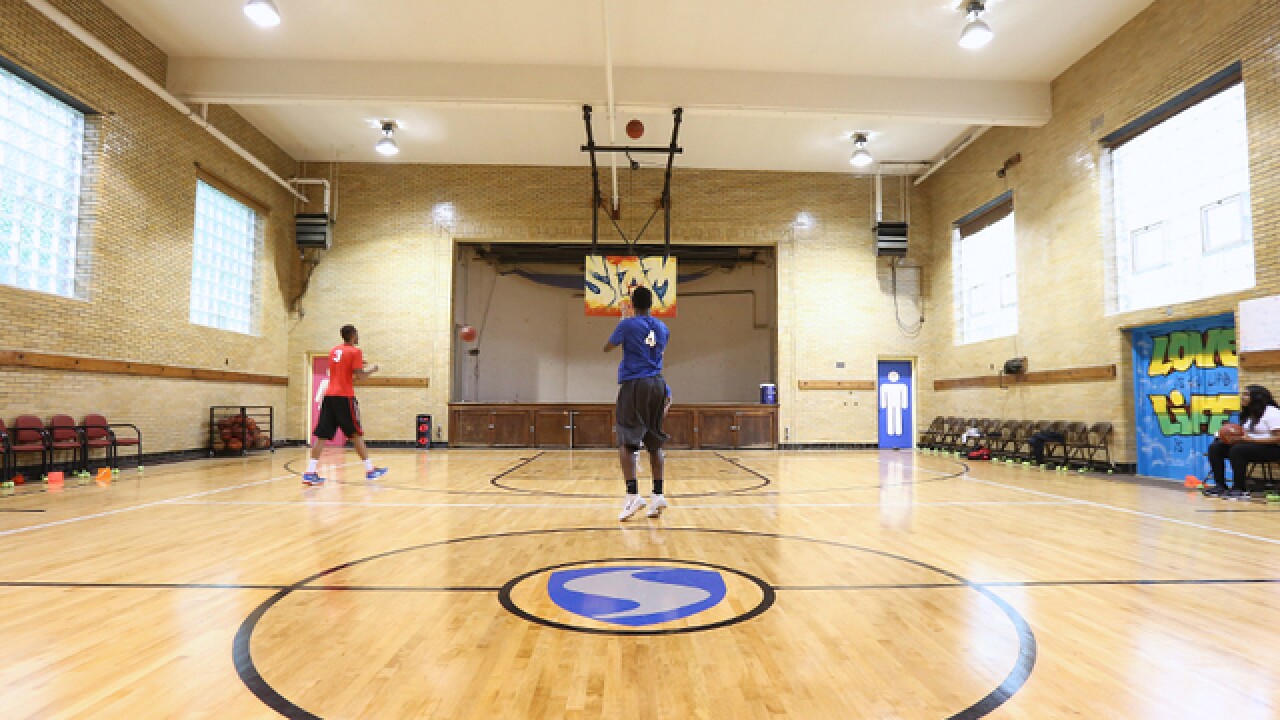 Emily Maxwell | WCPO
<p>Former Xavier basketball player Sherwin Anderson is working in the gym of a 125-year-old Over the Rhine church, Philippus United Church of Christ, to take young men off the streets and get them into college.</p> 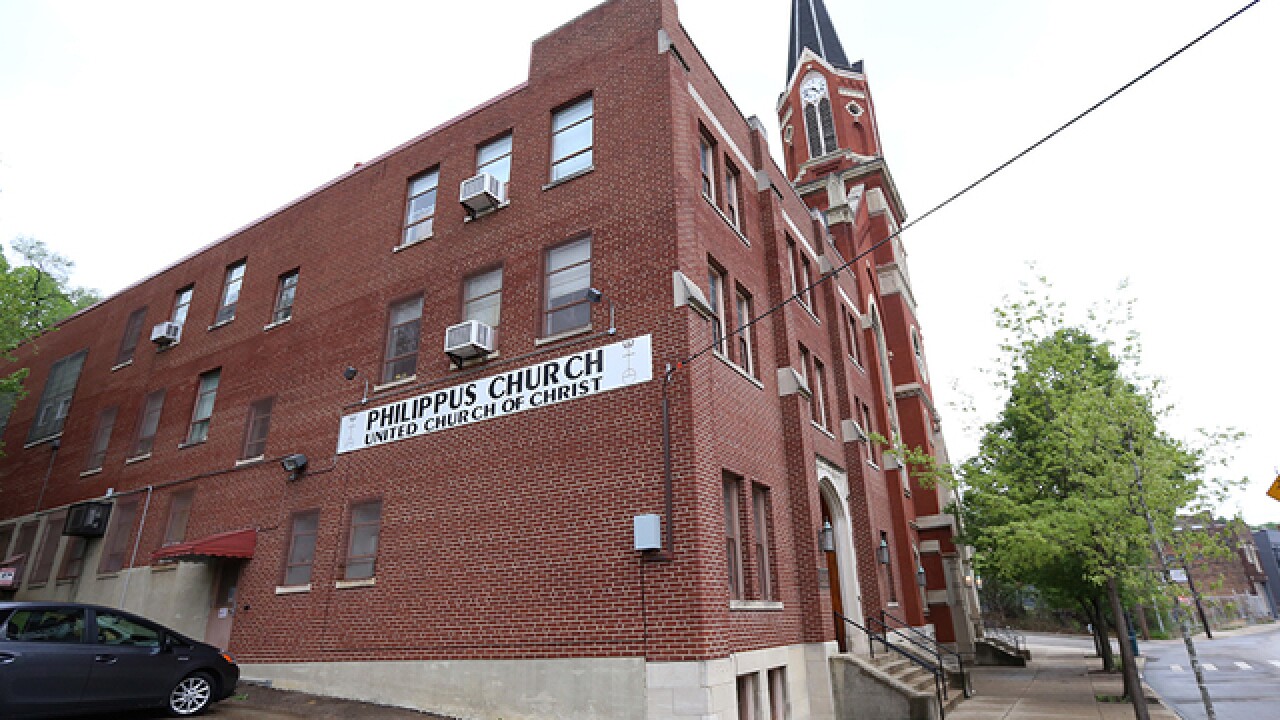 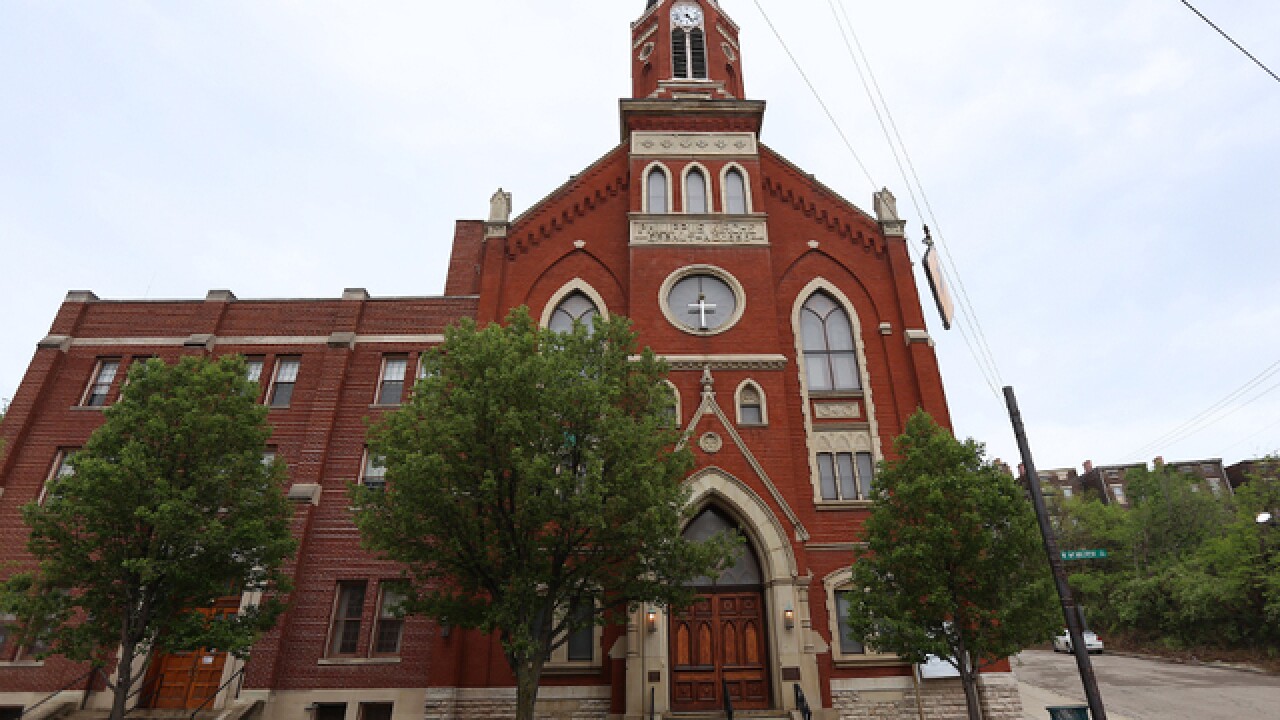 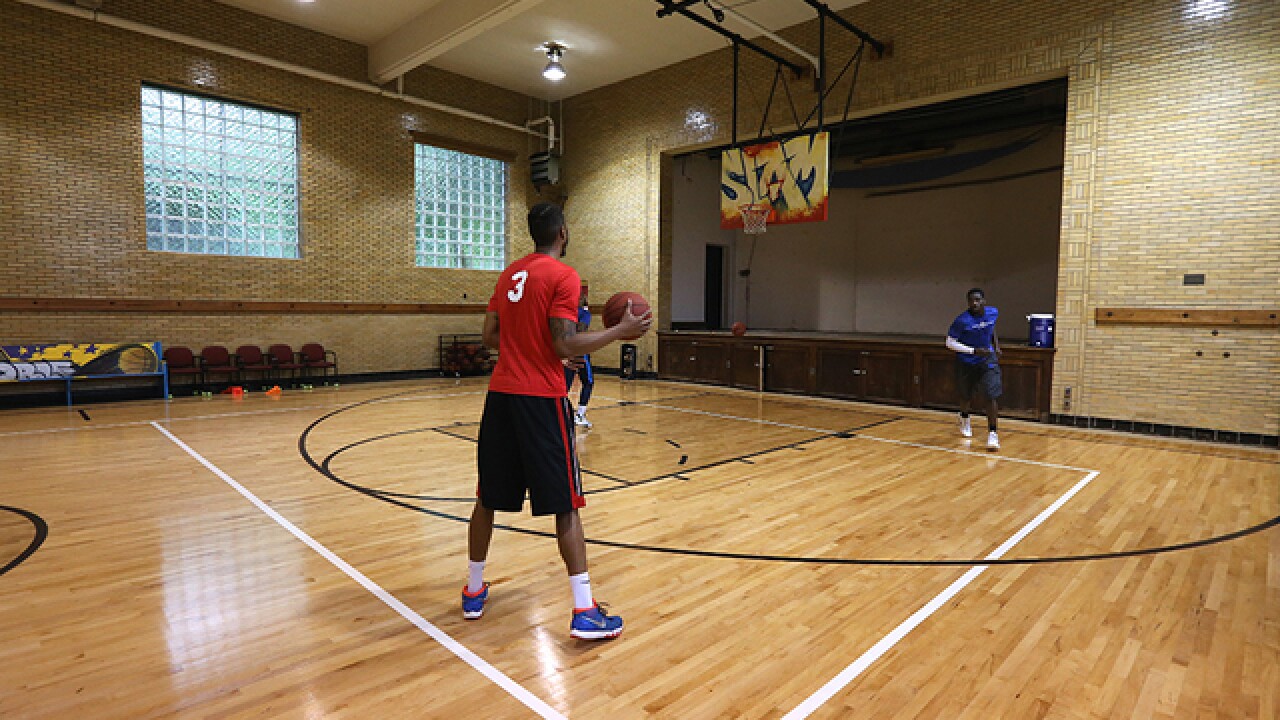 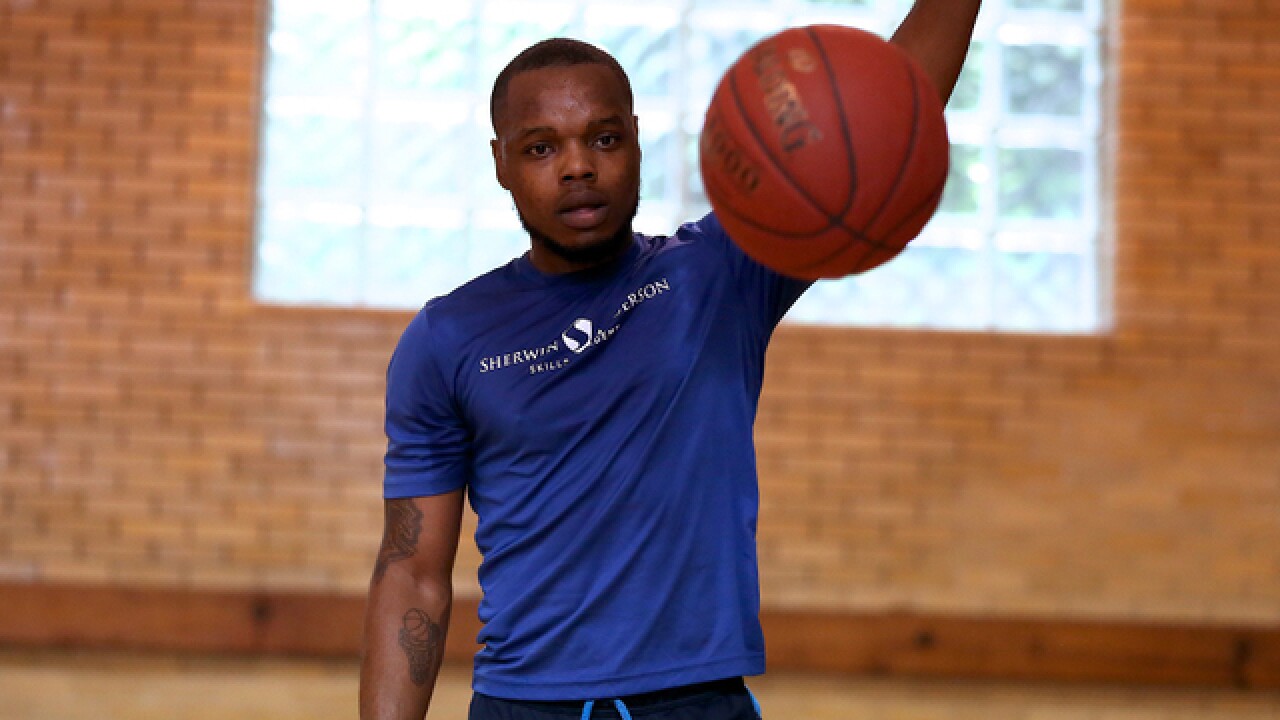 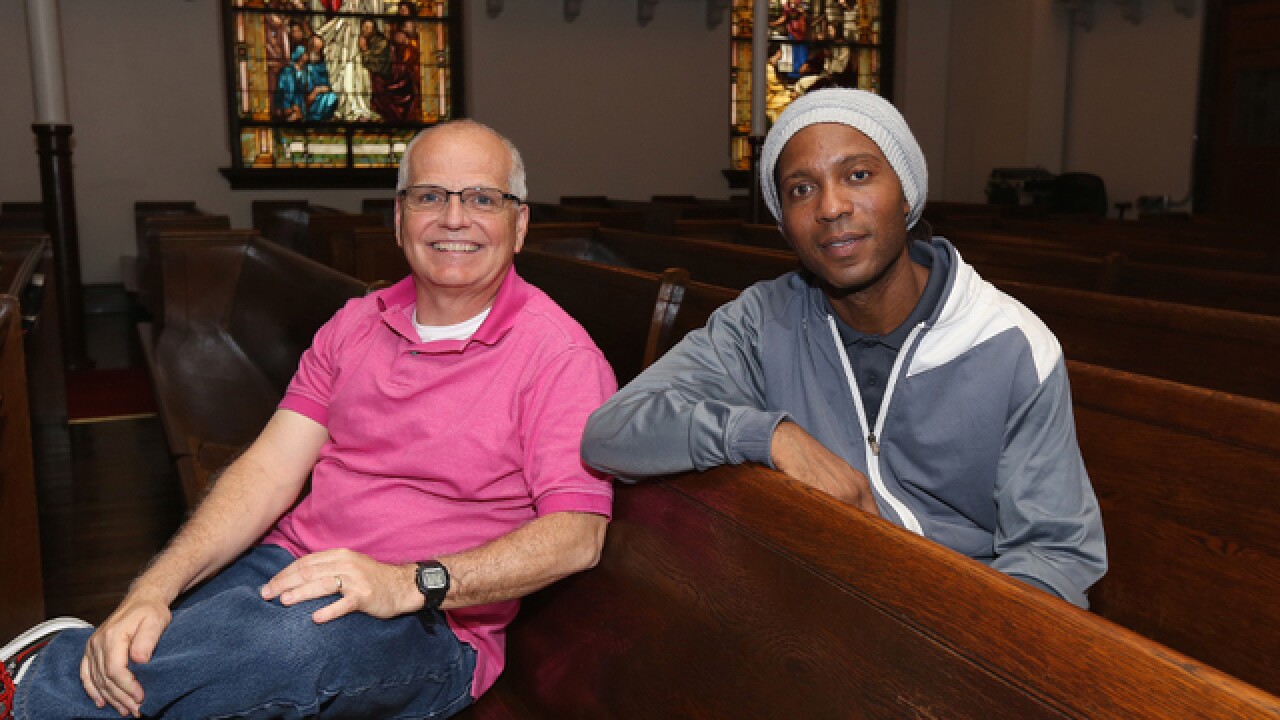 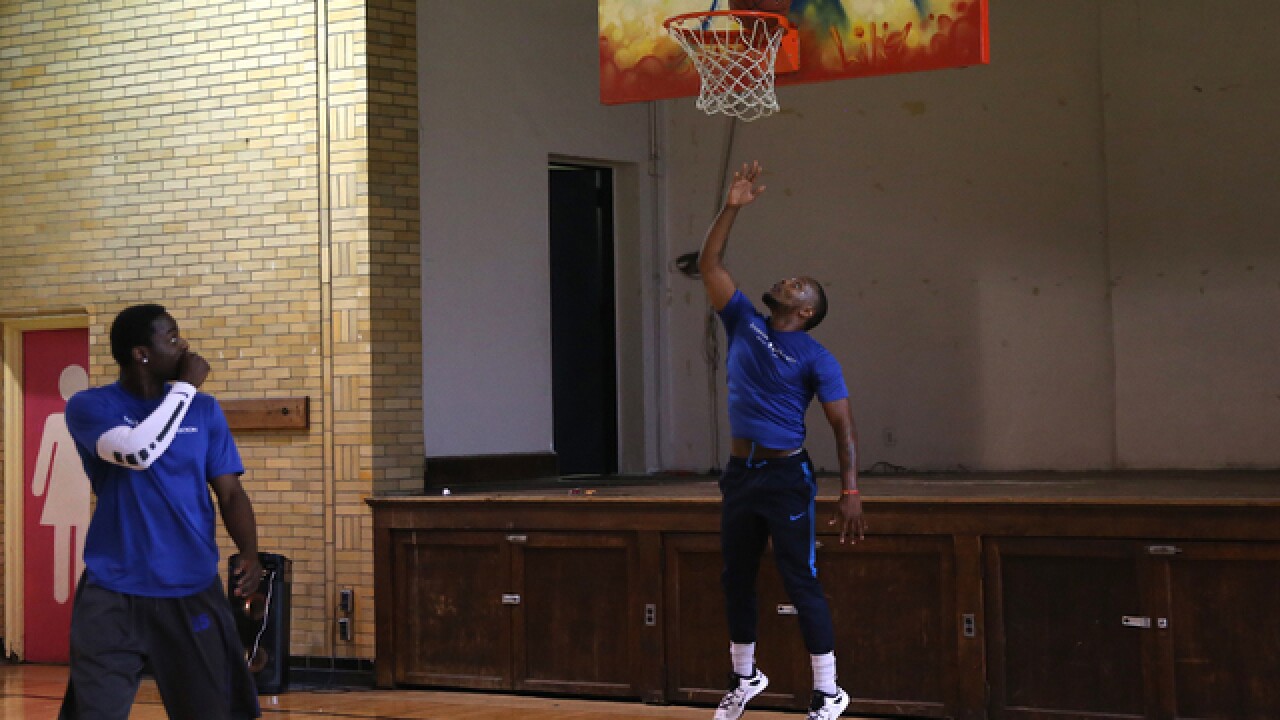 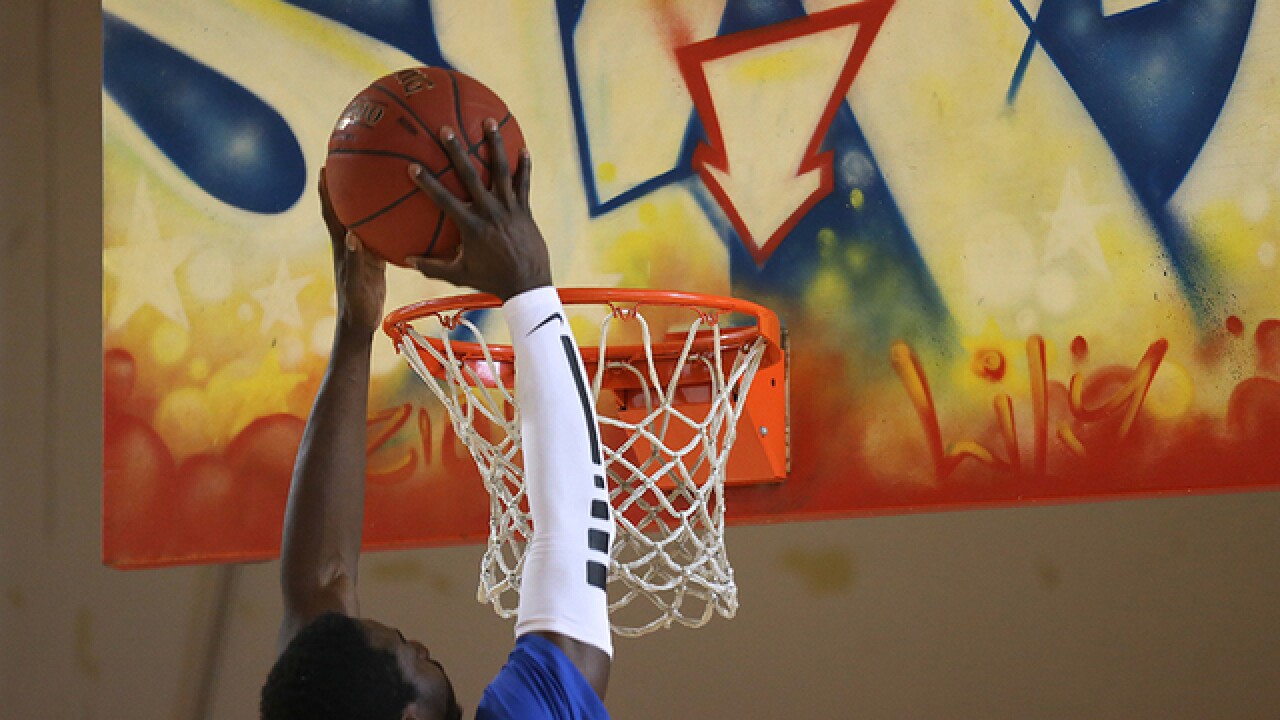 CINCINNATI – Kijauna Upshaw was out of high school and short on options.

Dad was long gone, mom was struggling to find a place to live, and classmates were turning to violence on the streets of Cincinnati's Evanston neighborhood.

"I lived right there where all the shootings happened," he said.

But Upshaw had one lifeline: Sherwin Anderson, the former Xavier University basketball standout and current best thing that ever happened to a growing group of young men in Greater Cincinnati in desperate need of hope.

With Anderson's help, Upshaw went from almost homeless a year ago to being a two-sport college student at Rainy River Community College in International Falls, Minnesota since January.

His grades are near the top of his class, he's the closer on the baseball team and looking forward to playing on the basketball team in the fall. After that, he has his sights on a Division I scholarship.

Anderson and the Rev. Sam Wyatt, pastor of Philippus United Church of Christ in Over-the-Rhine, hope to help a lot more young men transcend their circumstances through working in an old church gym that had been padlocked for decades until last fall.

Anderson, an African-American who grew up in a tough section of Brooklyn, New York, and Wyatt, a white minister who grew up as a Southern Baptist in Alabama, think they've hit on a formula that can change lives of many young men throughout the urban core whose current life trajectory is bleak.

"For guys between the ages of 18 and 25, there is not a lot for them. But what they can do is come to the gym, play basketball and really learn some life lessons from Sherwin," Wyatt said.

Speaking in the hall of the 125-year-old church, Anderson nearly jumps out of his chair with excitement when he talks about the opportunities that are available playing basketball at hundreds of colleges and junior colleges.

"There are 364 Division I schools. There are Division II schools and Division III schools that do not give out scholarships, but give grants. There's junior college, there's NAIA (National Association of Intercollegiate Athletics)," he said. "There's an option I believe for every young man in the country, and all we have to do is search."

Crossroads Between Hope and Danger

"When the sun comes out this summer, all you're going to hear is gunshots and young men dying in the streets," he said. "These kids need options. They need things to do, to put their focus on something. There's no focus. All I'm doing is giving them options."

Anderson, a 1996 XU graduate, talks from experience. His parents emigrated from Guyana and moved into the drug-ravaged Bedford-Stuyvesant section of Brooklyn.

"Basketball saved me. Every other home boy (he socialized with) is a drug dealer. The day that I left for college, I never went back," he said.

Anderson was lucky enough to have parents who taught him a strong work ethic, working multiple jobs to make ends meet.

At Xavier, coaches Pete Gillen and, later, Skip Prosser pushed him to be his best. After a stint with the Harlem Globetrotters, Anderson found his way back to Cincinnati, where he has been a private basketball trainer for years.

Wyatt said Anderson's story gives him credibility with young men that is harder for him to establish.

"Sherwin has lived in their shoes. I can care for the guys, but it's hard to walk in their shoes," he said. "Sherwin can talk with them. He has a lot of credibility for them more than another white guy with keys to the gym."

With the success of Upshaw to point at, Anderson is working with about 10 more young men to use basketball to either enter college or a professional league.

Shandon Stone, or "Stone Warrior," as Anderson likes to call him, lives downtown after short stints at Ohio Midwestern College in Sharonville and Central State University in Wilberforce, Ohio.

Kidney disease cost him one kidney a few months ago, but he showed up at a recent workout chiseled and trim, impressing Anderson.

Stone has been working with Anderson for two years after his Taft High School coach recommended Anderson. His goal is to play pro ball in Europe.

In the process, he's expanded his own mentoring skills, bringing in younger relatives and teenagers he knows to work at Philippus' gym.

"It keeps them safe. It's not about sitting outside on the streets and selling drugs and the things they're limited to do. It helps them put their time into a place that betters them," Stone said.

Regardless of achieving that goal, the journey is a fulfilling one for him.

"It allows me to express myself. When I touch a basketball I turn into a whole different guy. It's like nothing on my mind but the game. It's love, it's passion, it's everything that you can name," Stone said.

DaMarkco Foster, 24, has NBA aspirations. The University of Tampa graduate with a social science degree has been mentored by Anderson since he was a struggling sophomore at Woodward High School.

"One day he saw me in open gym and he was like, 'you can shoot. You should start working with me,'" Foster said.

After another frustrating year at Woodward getting little playing time, he transferred to Newport High School, where he became one of the top players in the state.

With Anderson's encouragement, Foster enrolled at Daytona State and transferred to Tampa after two years.

He and his family lived in Winton Terrace, Roselawn and other neighborhoods beset by high crime and drug use, and he's grateful for the opportunities that basketball gave him at higher education.

"It just always gave me a sense of direction. I always knew at least what I wanted to do. It gave me the chance to escape for a couple of years and see more of the world,  open a lot of doors," he said.

Upshaw's challenges were possibly the biggest, with unstable housing and too many opportunities to fall in with the wrong crowd.

But Anderson saw talent and drive in Upshaw that he didn't want wasted.

"I took him into my home and loved him and helped him be a better person," Anderson said.

He transferred out of Shroder Paideia High School into Middletown Christian School, where he excelled at basketball and football. A dislocated shoulder scuttled his first chance for a full scholarship to college, but Anderson kept him close and kept pushing him.

"I got an offer to Wilmington College, but I failed the entrance test by one point, so that was a bummer," Upshaw said. "But we never lost hope. We always knew something would come around."

Upshaw got a job and, with Anderson's guidance, opened a checking account and learned about building a good credit history – tools for building a stable future that many of his peers were without.

"Most have diplomas, but they don't have the mental preparation to do 8-5 jobs  Because they've never lived in an 8-5 atmosphere," Wyatt said.

When they're working with Anderson, Wyatt said, "They're not just out there running up an down the court. The whole time he's in there he's teaching them life lessons."

When Rainy River offered him a financial aid package that made it possible for him to enroll, he jumped at the chance, even if the weather at the school on the Canadian border is less than ideal.

Upshaw said he was an average high school student, so when his hard work this winter and spring put him near the top of his class, he grew uncomfortable.

He let us grades slide for a few weeks before a counselor pulled him aside and helped him figure out that he was committing self-sabotage.

"I was one of five who got a 95 on a math test,  and everyone else had a 70 or lower," Upshaw said. "I felt like a nerd a little bit. I always saw them in class and thought of them a little differently."

It didn't take him long to realize how counterproductive it would be to get mediocre grades.

"It's okay to separate yourself from a crowd," he said.

Wyatt and Anderson hope to win outside funding to layer on additional services for the young men who come to play basketball.

"As funding comes available, we'd like to get a licensed clinical social worker, set up budgeting classes, financial advice, parenting classes. They seem to be hungry for knowledge," Wyatt said.

Chip Harrod agrees. The professional consultant who helps nonprofits scale their operations said Philippus has been doing all the right groundwork to provide more help with outside finding, creating logic models, program objectives and plans to measure success with hard data.

"We think it's just a great idea. And there's a tremendous need to work with this population," he said.

Anderson and Wyatt said there are many more urban churches with padlocked gyms that could be replicate the work they're doing.

"Open the gyms up. The worst-case scenario is that they're going to be used," Wyatt said. "There are a lot of people in churches who played high school and college basketball or pickup ball. Open a gym up in a neighborhood and see how fast 100 kids show up at your door."

"I've been looking for a gym for years, and when I opened up the doors, it was the greatest thing I ever did," he said.