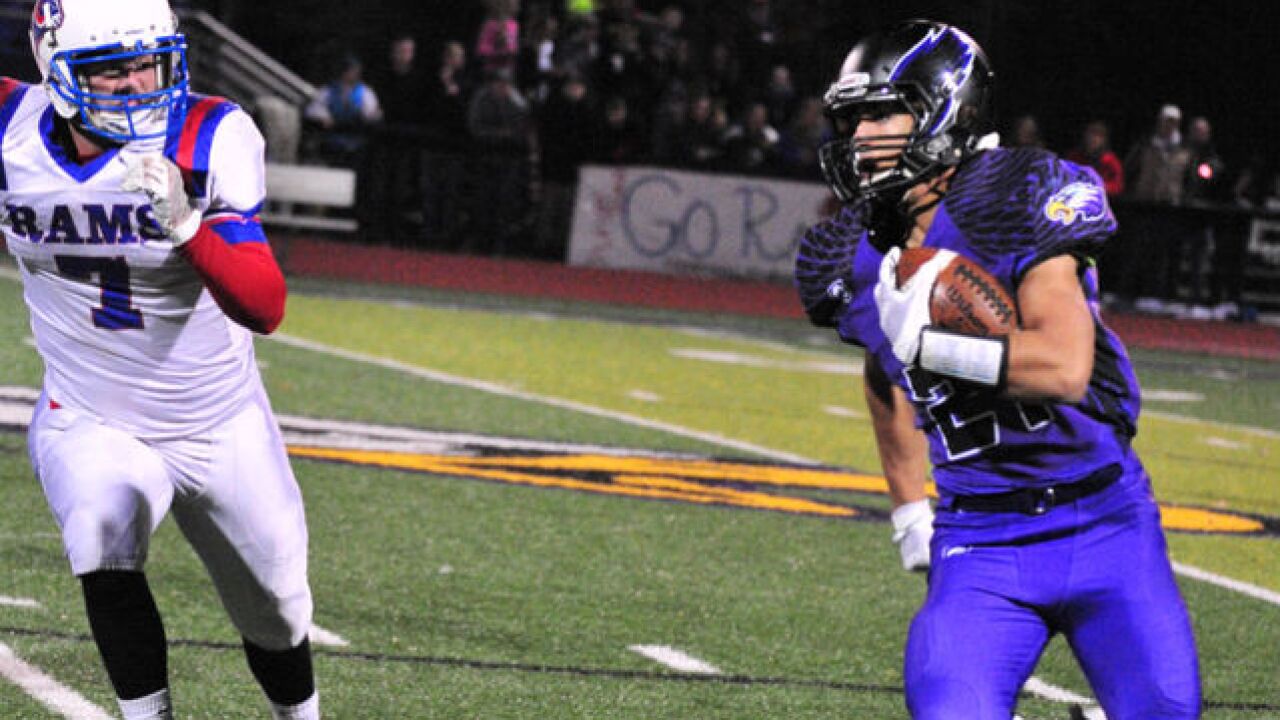 Copyright 2018 Scripps Media, Inc. All rights reserved. This material may not be published, broadcast, rewritten, or redistributed.
<p>CHCA senior running back Alex Barnard (right) will be a part of a talented backfield for the Eagles this season. (Julie Robinson photo)</p>

The football standout didn’t leave anything to chance when it came to his nutrition. Six or seven meals, including breakfast, lunch and snacks in between were properly packed since Barnard lives in Colerain Township and isn’t able to commute home quickly.

From almonds to beef jerky and from tuna packs to multiple peanut butter and jelly sandwiches, Barnard was prepared during the day.

“He did a great job and the family did a good job,” said Adam Atallah, CHCA’s Director of Sports Performance.

Barnard, a Bucknell commit, is mindful of what it takes to be successful on the field and in the classroom. He is also among the area’s players to watch this season.

The running back/defensive back had 530 yards rushing and seven touchdowns as a junior. He will also see time as a slot receiver and is an excellent cover cornerback on defense.

“He’s been an explosive player who has played since he’s been a sophomore,” CHCA coach Mark Mueller said. “What we’re pushing him to do is to develop leadership skills.”

Every senior is a captain with the CHCA football program. Barnard, 17, has certainly helped in that leadership category this offseason.

"Alex is a wonderful guy and he also empowers others," Atallah said. "He is a great teammate."

Late in his junior year, Barnard attended a camp that reinforced the ideals of trust and respect for others on the team. During one activity in Morrow this spring, he swam with a blindfold while his teammates covered their ears and directed him with their eyes toward the goal.

“I’ve definitely grown mentally for sure,” Barnard said. “I have a stronger mentality and mindset.”

The Eagles (8-3 in 2017) have a strong energy level and commitment this summer, according to Mueller and the players.

Barnard said the goal is a state title. The Eagles aren’t reluctant to discuss lofty expectations each season. They meet those challenges with a rigorous non-conference schedule.

"I like our chemistry," CHCA junior quarterback Cole Fisher said. "We don't slack off. We don't take anything for granted."

CHCA Athletic Director Eric Taylor said Barnard is a good example for the team. He has connected well at the school and his growth and maturity have been impressive since he's been a middle-school student. That work ethic helped Barnard to earn Ivy League and Patriot League offers.

"He has such a great personality," Taylor said. "He's extremely outgoing and is a hard worker."

As a scholar-athlete, Barnard has an interest in engineering and business and wants to learn more about engineering management. He'd also like to travel abroad one day.

"What people don’t know about Alex is his work ethic – he’s been blessed with a lot of athletic ability – and I think he’s done a great job of working on it and honing it in and being effective in his training and the mental component,” Atallah said.