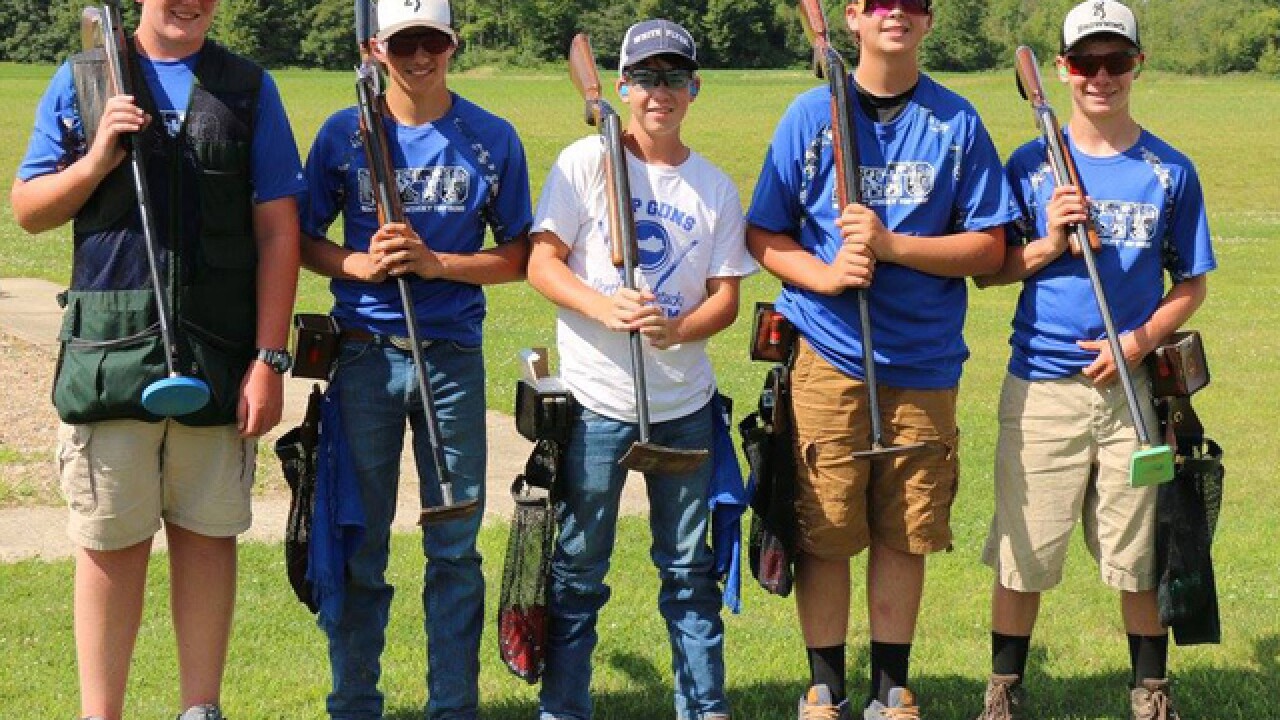 Copyright 2017 Scripps Media, Inc. All rights reserved. This material may not be published, broadcast, rewritten, or redistributed.
Provided
<p>Members of the Northern Kentucky Scholastic Trap Shooting Team in Alexandria pose after a shooting competition in Marengo, Ohio earlier this year. They are, from left, Andrew Maus, Tyler Allphin, Logan Travis, Joe Humphrey and Nolan Kamer.</p>

The phrase "charitable gaming" might call to mind images of senior citizens playing bingo in the basements of Roman Catholic churches or a sports car being raffled at the St. Cecilia festival in Independence.

But in Northern Kentucky there are also firearms among the cakes and cars. These include a Daniel Defense M4v7 rifle with a DD Superior Suppression Device engraved with "Friends of the NRA."

That was the prize for an Oct. 31 raffle advertised on the NRA Foundation -- Kentucky Friends of the NRA Facebook page. Tickets were $100, with only 30 sold, and were drawn at Shooters Supply on Richardson Road in Independence.

Reports returned to the Kentucky Department of Charitable Gaming show that in 2016, after paying expenses, the NRA Foundation Inc. earned $579,000 through charitable gaming in Kenton County.

The NRA Foundation is a nonprofit created in 1990 to raise "tax-deductible contributions in support of a wide range of firearm-related public interest activities of National Rifle Association of America and other organizations that defend and foster the Second Amendment rights of law-abiding Americans."

A group based in Boone County, Northern Kentucky Friends of the NRA, reported earning $23,988 after expenses doing charitable gaming in 2016.

It was not apparent, however, how Northern Kentucky Friends of the NRA was related to the NRA Foundation. They listed separate federal identification numbers on their charitable gaming licenses applications for 2017.

"Through their efforts, over $575,000 has been raised since 2011, with over $260,000 being used to fund nonprofits in Kentucky, with the balance funding grants nationwide," the application says.

Mike Kamer, chairman of the Northern Kentucky Friends of the NRA, referred questions to John LaRowe, Kentucky field representative for the National Rifle Association, who did not return repeated messages for comment on this story.

The NRA Foundation referred questions to Jason Brown, media relations manager for the National Rifle Association, who did not provide answers in time for the deadline for this story.

Department of Charitable Gaming records show that in the rest of Kentucky, four other "Friends of the NRA" groups earned $218,000, after paying prizes, from charitable gaming in 2016:

Unlike Catholic churches or veterans' groups, these groups don't do weekly bingo sessions where volunteers sell instant-win tickets. Their charitable gaming license allows them to do raffles and to hold special, limited fundraising events, such as an annual banquet at which games of chance are played.

For example, on its Facebook page, the Northern Kentucky Friends of the NRA advertised what it called a Muzzle Blast, held Sept. 26 of this year in Alexandria. The cost of a dinner was $25, but for $100, one could buy the "Big Shot" package, which included dinner and a $100 raffle pack.

There was also a "wall of guns," where each winner received a choice of guns from dozens of options. Odds were good with only 35 tickets sold per round.

The NRA Foundation uses money from events like this to fund its grants to shooting teams and clubs nationwide.

On its website, the NRA Foundation says that since its establishment in 1990, it has awarded nearly $335 million in grant funding to support the shooting sports, including law enforcement training, hunter education and firearms training.

In its 2016 annual report, the NRA Foundation said it had received proceeds of $30 million from Friends of NRA events in 2016. Those events were its biggest source of revenue, with contributions of $17.5 million being the second-biggest.

In its license application for 2017, the NRA Foundation Inc. said that in 2016, it awarded more than $206,500 to nonprofits in Kentucky. These included shooting teams and archery groups from all over the state.

The team, which had 45 members this year, all of them students age 10 to 23, does competitive shooting of clay pigeons with shotguns, and shooting of steel targets with rifles and pistols. It practices in Claryville, in Campbell County, at the Bob White Club.

The team usually applies every year for an NRA Foundation grant, Menning said. It couldn't do what it does without support from the foundation, he said.

He's a big fan of the NRA as well.

"The NRA is our steady and strong voice, and our iron fist," he said. "This will be my 18th year coaching some great kids who love the sport of trap shooting, pistol and rifle shooting. This would have long ago been gone if it were not for the NRA."