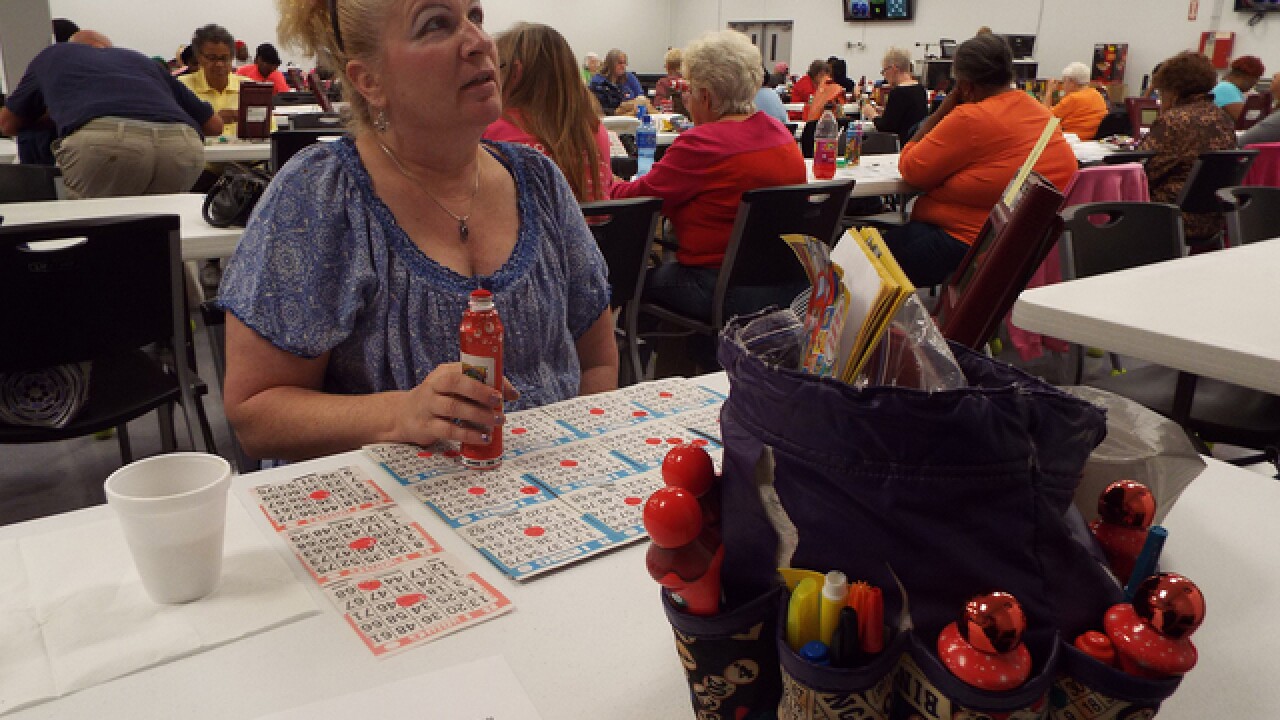 Copyright 2017 Scripps Media, Inc. All rights reserved. This material may not be published, broadcast, rewritten, or redistributed.
Kevin Eigelbach | WCPO contributor
<p>Hamilton resident Donna Baker looks up at one of the large monitors that display winning numbers during a recent bingo night at Park Montessori preschool in Sharonville.</p>

The fire marshal’s certificate on the wall says the hall can hold 350 people, and there are few empty chairs among the long rows of tables.

As the announcer calls off numbers and letters, the players, most of them women over 40, mark them on their paper bingo sheets. Others keep track on handheld computers specially made for bingo.

In the aisles, men and women walk by, carrying plastic trays filled with pull tabs, paper cards you simply have to open to find out if you’ve won some money. They sell these to the players for $1 a pop.

There’s an ATM in the corner, if you need cash. And there’s an off-duty but in-uniform Hamilton County sheriff’s deputy on hand, in case anyone gets ideas about taking cash.

If you think a lot of the green stuff changes hands here, you’re right. In the fiscal year ending Sept. 30, 2016, Park Montessori grossed $4 million from charitable gaming, more than $1.3 million more than any other nonprofit in the 513 area code.

After the preschool paid bingo and pull-tab prize winners, that amounted to $467,000 in net profit. The preschool uses the proceeds to keep tuition down and to save for a new building, vice president Connie Still said.

Park Montessori must be doing something right. Since 2011, its gross receipts have risen from $2.6 million to $4 million, with a slight dip last year. That’s contrary to the trend among the rest of Ohio, which has seen charitable gaming receipts fall steadily from a peak of about $1.5 billion in 2005 to $744 million last fiscal year.

Still won’t say why she thinks her games make so much money. She doesn’t want to give away her secrets to the competition, she said.

And there is competition, not so much from other bingo games but from casinos, racinos and online gaming. For example, in 2013, the Miami Valley Gaming race track and casino opened in Lebanon. That same year, the former Horseshoe Cincinnati, now Jack Cincinnati Casino, opened at 1000 Broadway.

There’s no doubt about it, said Charles Gumbert, director of fundraising for Pride Youth Development Foundation in Fairfield. The foundation grossed $2.7 million in the year ending Sept. 30, 2016, second only to Park Montessori in the 513 area code.

Before the riverboats in Indiana and land-based casinos, the bingo games at Pride used to attract more than 200 players every session, he said. Now, it’s down to about 170 on average.

That has prompted Pride to reduce the amount of grant money it awards to local, youth-based athletic programs for underprivileged children, he said.

“What people don’t understand is, if you go to a casino, some bigwig is getting money in his pocket,” he said. “But if you go to a bingo, that money goes to charity.”

For many years in Ohio, charities could obtain two types of gaming licenses: one to conduct bingo sessions and another to sell pull tabs at those sessions. After prizes are paid out, actual bingo games typically lose money for charities. Pull tabs are the moneymakers.

But as of 2012, charities may contract with an unlimited number of organizations to sell pull tabs for them. The charity sells a box of tickets to the organization, which then sells them individually to customers.

That’s proven a popular moneymaker for charities, Thomas said. After all, it relieves charities of the duty to find volunteers to sell the tickets at bingo games.

For example, Serving Adults Through Changing Times is a Cincinnati charity that helps senior citizens. The nonprofit just has a Type III license, and it grossed $2 million in the year ending Sept. 30, 2016.

In 2015, Kentucky’s General Assembly gave charitable gaming in that state an assist by allowing use of the electronic, hand-held computer version of pull tabs. In March 2016, the Department of Charitable Gaming began licensing their use in bingo games.

Now, 59 out of the 234 bingo operators in the state are also licensed for those as well, said Elizabeth Kuhn, executive director of the Office of Communications and Public Outreach for the Kentucky Public Protection Cabinet. Another 48 nonprofits not licensed to do bingo also offer electronic pull tabs.

It’s likely that their use has helped the state boost its charitable gaming take, Kuhn said. According to the Department, in 2016, gross receipts from charitable gaming statewide hit $370 million, an increase of almost 7 percent over 2015. It was the first increase in at least a decade.

What worked well throughout the state seems to have worked especially well in Northern Kentucky.

One successful charity that doesn’t use electronic pull tabs is Immaculate Heart of Mary Roman Catholic Church in Burlington.

In her judgment, electronic bingo machines and pull tabs take the fun out of the game. Patrons like to rip open the paper pull tabs, said Peggy Wells, who has managed the bingo for 11 years.

Immaculate Heart of Mary has been the top grossing bingo in Northern Kentucky for the past four years. In 2016, it grossed $1.8 million, which after expenses amounted to $240,000 for the church and its school.

Burlington resident Dena Garcia plays at Immaculate Heart of Mary because more bingo games are played at a session, giving her more chances to win. She also likes that the pull tabs are already banded together in quantities of 10, which is how most people like to buy them.

It helps that the bingo sessions are held on Friday evening, when people are tired from the work week and want an escape, Wells said. She also likes to think that the bingo volunteers, who know the patrons and will pray for them when they have needs, are another attraction.

“I think of bingo as my second family,” she said.