The kid from Campbellsville, KY, is on a roll 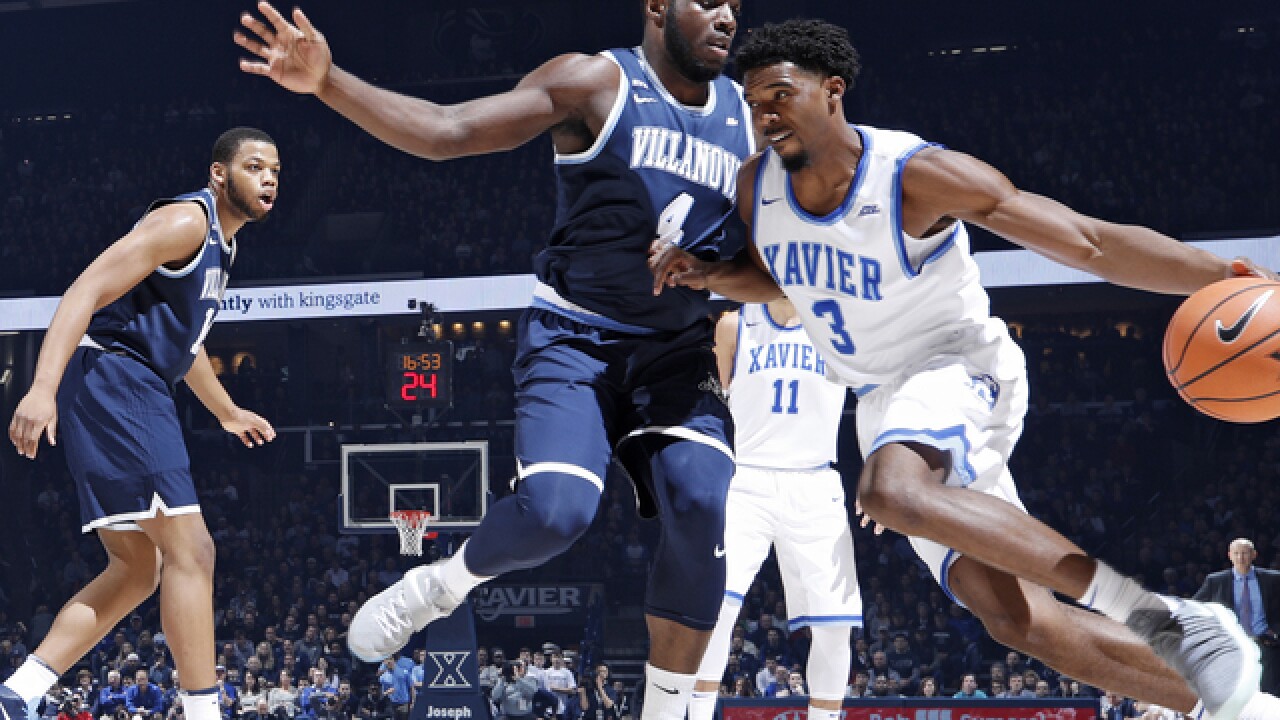 Image copyright 2018 Getty Images. All rights reserved. This material may not be published, broadcast, rewritten, or redistributed.
Joe Robbins | Getty Images
<p>Eric Paschall of the Villanova Wildcats defends against Quentin Goodin of the Xavier Musketeers in the first half of a game at Cintas Center on Feb. 17, 2018 in Cincinnati, Ohio.</p>

CINCINNATI -- It is the middle of February in Omaha, Nebraska, which must seem like the other side of the planet for a kid from Campbellsville, Kentucky.

There are 4.6 seconds remaining, and the fifth-ranked Xavier Musketeers have the ball, trailing the Creighton Blue Jays, 71-70.

During the timeout, a play is drawn up for point guard Quentin Goodin. Gooden came to the Musketeers by way of Taylor County High School, a building flanked on either side by empty fields just under a two-hour drive from both Lexington and Louisville. Its student body comprises fewer than 900.

Goodin will be entrusted with making a play -- alone -- to help the Musketeers become the first team to beat Creighton on its home floor this season.

With 18,257 fans roaring mostly for the Blue Jays, Goodin drives the length of the court, dribbles between two defenders at midcourt, then is fouled going hard to the basket with a fraction of a second remaining.

Goodin makes the first free throw to tie the score, then the second.

The former Kentucky Mr. Basketball had no doubts.

"I'm comfortable at the free-throw line," said Goodin, who shoots 80 percent from there. "I just wanted to make my first one, make it go to overtime. After I made the first one, I knew the second one was going in. I had that much confidence in myself."

It's not that Goodin has ever lacked confidence. Few four-star recruits sought after by programs like Michigan, Florida, and Louisville are unsure of their ability.

But the moxie Goodin showed on that Saturday afternoon in the Century Link Center, and throughout the Musketeers' run to the Elite Eight last season, largely stems from what he went through a year ago this month.

When the Musketeers hit rock bottom.

Goodin, then a true freshman, was handed the keys to the point guard position after Edmond Sumner went down with a knee injury. Sumner would never play for Xavier again. Soon after, Trevon Bluiett was on the bench for two games with a bad ankle. He was less than 100 percent for longer than that.

Minus two stars and with a freshman adjusting to his new role, the Musketeers lost six straight games for the first time since 1982, four of the losses by double digits, and Xavier was on the brink of missing the NCAA Tournament for just the second time in 11 seasons.

"I was just thrown into that position," Goodin said. "I was a freshman, I played in Taylor County, I never really played any real competition, besides in the summer. You kind of stop believing in yourself little bit. At the same time … you find yourself. You find your character."

To make matters worse, Goodin's ability to drive to the basket and create opportunities for teammates was limited by a sharp pain in his right heel. He would later learn it was from a bout with plantar fasciitis, which he spent the bulk of last summer treating with an injection, ice, and rest.

"It was one of the lowest points of my life," Goodin said of Xavier's February slide. "I just sat in my room. I didn't go out. When I had to walk around campus and talk to people about our situation, it kind of got to the point where everybody was embarrassed. It wasn't just me. It was shameful, really."

To say the Musketeers just got tired of losing is a bit simplistic.

In truth, Bluiett came back healthy, Malcolm Bernard and RaShid Gaston stepped up as seniors, and Goodin stopped questioning himself. Xavier won three straight games, two in the Big East Conference Tournament, and squeezed into the NCAA Tournament.

Goodin averaged 3.5 assists and 6.5 points during the NCAA Tournament. He tied a Xavier NCAA Tournament record of nine assists in a first-round win over Maryland, then proceeded to lead the Musketeers to the brink of the Final Four.

Goodin came back healthy for this season with wisdom not common to most sophomores.

Goodin dished out a career-high 12 assists with only two turnovers and scored 10 points in last week's 95-79 loss to Villanova. Against Georgetown on Wednesday, he was 3-for-3 from 3-point range and scored 19 points. He is averaging 12.5 points over the last eight games. During that stretch, he is 14 of 23 from 3-point range.

"I think a lot of people like to point to Q's shooting," Mack said. "I think the good point guards get in the lane and do what the game tells them to do. On defense, we can put him on a 1 or a 2, and use his length and athleticism. His concentration on defense has gotten so much better. Just the overall consistency and playing the point guard position the right way is what I'm most excited about with Q."

Goodin has worked hard on his shooting in recent weeks, and Mack believes Goodin has the physical ability to be an elite defender.

Even two days after the loss to Villanova, Goodin wasn't too interested in discussing his career high in assists. For him, the loss is what mattered. Goodin didn't participate in the postgame media session as planned; he remained in the locker room, overcome.

"The reason there was a lot of emotion is that we really wanted to win that game," Goodin said. "But you can't dwell on that. You have to move on."

No. 3 Xavier (25-4, 13-3 Big East) remains in first place in the Big East, and a possible No. 1 seed in the NCAA Tournament, according to some bracketologists.

With Villanova's loss on Saturday, Xavier now controls its own destiny in the Big East Conference race. If the Musketeers win their final two games, they will be Big East champs.

And, if they do, it will be the kid from Campbellsville running the show.