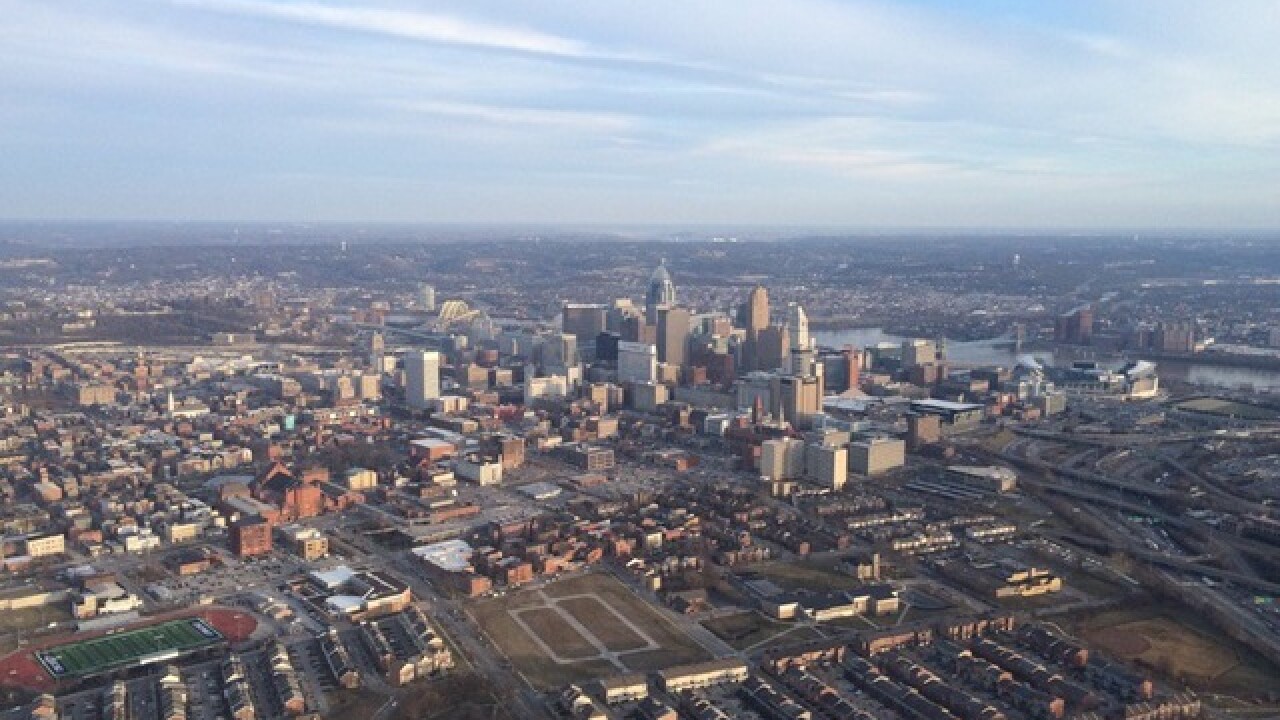 Copyright 2017 Scripps Media, Inc. All rights reserved. This material may not be published, broadcast, rewritten, or redistributed.
TJ Parker | WCPO

CINCINNATI — Greater Cincinnati is still growing, just more slowly than most of its regional neighbors.

In figures released in late March, the U.S. Census Bureau reported that the 15 counties included in the Cincinnati Metropolitan Statistical Area had a total estimated population of more than 2.17 million people on July 1, 2015. That’s a modest 0.43 percent rise from the year before and up 2.03 percent from the official figure from the 2010 census.

That makes the Tri-State the largest metropolitan area for a few hundred miles and the largest in Ohio. Except, of course, that it’s not all in Ohio. As cheerleaders for Columbus and Cleveland might point out, only about three-fourths of the area’s population — 1.65 million — is in the Cincinnati MSA’s five Southwest Ohio counties, good for third place in the Buckeye State.

BY THE NUMBERS: How the Tri-State stacks up

Northern Kentucky is an integral part of the region, though, as the thousands who commute every day across the Brent Spence and Daniel Carter Beard bridges can attest. That’s a good thing, because Boone County remains Greater Cincinnati’s top growth engine.

BY THE NUMBERS: County-by-county statistics

While it’s no longer among the nation’s fastest-growing counties, Boone’s population still grew by an impressive 7.49 percent in the five years since the 2010 census and 1.21 percent from 2014 to 2015. That vitality helped Northern Kentucky to post the strongest growth of the Tri-State’s three big geographical sectors.

The seven Kentucky counties included in Greater Cincinnati together showed 0.61 percent growth in the past year and 3.63 percent in the last five years. Their combined estimated population of more than 440,000 means Northern Kentucky has passed a symbolic milestone: It now includes just more than 20 percent of the whole region’s people.

“We know we’re an integral part of the region, and the numbers are continuously showing it,” said Dan Tobergte, president and chief executive of the Northern Kentucky Tri-County Economic Development Corp., known as Tri-ED.

“From a site-selection standpoint — when you’re trying to present Northern Kentucky as a place to do business — when you have a population growth, that attracts site selectors,” Tobergte said. “That’s going to be continuously helpful for us and the entire region.”

He cited recent studies that ranked Greater Cincinnati as the No. 1 place to do business and No. 4 in the nation in total economic development projects. It’s the 24th largest metropolitan area.

Northern Kentucky’s growth wasn’t enough to catch Lexington as Kentucky’s No. 2 urban area, though, after No. 1 Louisville. Lexington, driven by strong growth in Scott County, topped 500,000 in population in 2015, according to the census bureau.

Balancing growth south of the river, the Tri-State’s two northern counties, Butler and Warren, continued to show steady population growth. The pace has cooled some in Warren County, where the census bureau said an estimated 224,469 people now live. No longer Ohio’s fastest-growing county (that’s now Delaware County near Columbus), Warren still posted strong growth of 5.54 percent over five years and 1.2 percent from 2014 to 2015.

“Suburbanization has been going on for decades,” he said. Jobs are also suburbanizing, fueling a circular and cumulative effect. “That means more population moves out closer to those jobs, too.”

What has changed, Salling said, is that immigration back into regions’ central cities has picked up. The combination of reasons for that include the allure of urban living to the millennial generation, a similar draw to so-called empty-nesters, who may be downsizing after seeing their children grow and go out on their own, and a jump in foreign immigration. He said both Cuyahoga, Cleveland’s county, and Hamilton County have seen higher immigration numbers.

“There’s been a movement to appreciate our inner cities and the advantages there,” Salling said. “We see millennials wanting to be in the action and living close to where the entertainment places are in town, and maybe they have skills that are more in demand in city centers.”

The result is that Hamilton County has more than held its own, growing a modest 0.16 percent in the last year and more than half a percent in the last five years. The county is home to more than 37 percent of the region’s residents. Given the competition from new construction in “exurbia,” the most distant belt of a region, Salling said, that’s an accomplishment.

“To the extent they can get jobs downtown, it’ll help residential development,” Auffrey said. Many employees will want to live close to work and the amenities of the central city, he said.

“We’re so fortunate we have such a high quality of life here.”

Both Auffrey and Salling said the suburbs, especially areas that were booming 20 or 30 years ago, are losing luster in a key way: Poverty and crime are increasing. Once the perception that the suburbs are free from the ills of the “big city” begins to wane, people will begin to rethink whether the hour-long daily commute from West Chester Township is really worth it.

That’s a crucial opportunity for cities, Salling said. “There’s growing recognition that, if you maintain a city and its services, it’s a good place to be.” He cited the quality of older housing stock in comparison to the structures that pop up in suburban subdivisions.

Cities will have to work to create that atmosphere, though. “Cities require investment to maintain,” Salling said, and that means spending money — whether on infrastructure or maintaining historic houses.

It’s not just central cities like Cincinnati, Auffrey said. The so-called inner ring of suburbs — such as communities in Hamilton County that grew quickly in the mid-20th century — are working to reinvent themselves as places with vitality and diversity. That atmosphere will appeal to millennials, he said, if or when they decide, like their parents and grandparents, that the heart of the city isn’t where they want to raise their children.

Those communities will be able to leverage their proximity to the hub city with residential diversity, Auffrey said. He said further growth in transit options could make that an even more appealing option.

The census figures also revealed an ongoing drain in the populations of the Tri-State’s rural counties. The southern tier of Kentucky counties — including Bracken, Grant and Pendleton — showed one-year losses, as did Brown County in Ohio and Franklin and Ohio counties in Indiana. Dearborn County lost more than 1 percent of its residents over five years; Brown lost 2.25 percent.

Number of residents for the 15 counties included in the Cincinnati Metropolitan Statistical Area (MSA) as defined by the U.S. Census Bureau.

HOW DOES TRI-STATE STACK UP?

Population of the Cincinnati MSA compared with that of nearby metropolitan areas: