Cedar Village seniors, Cincinnati teens learn from each other through Better Together program 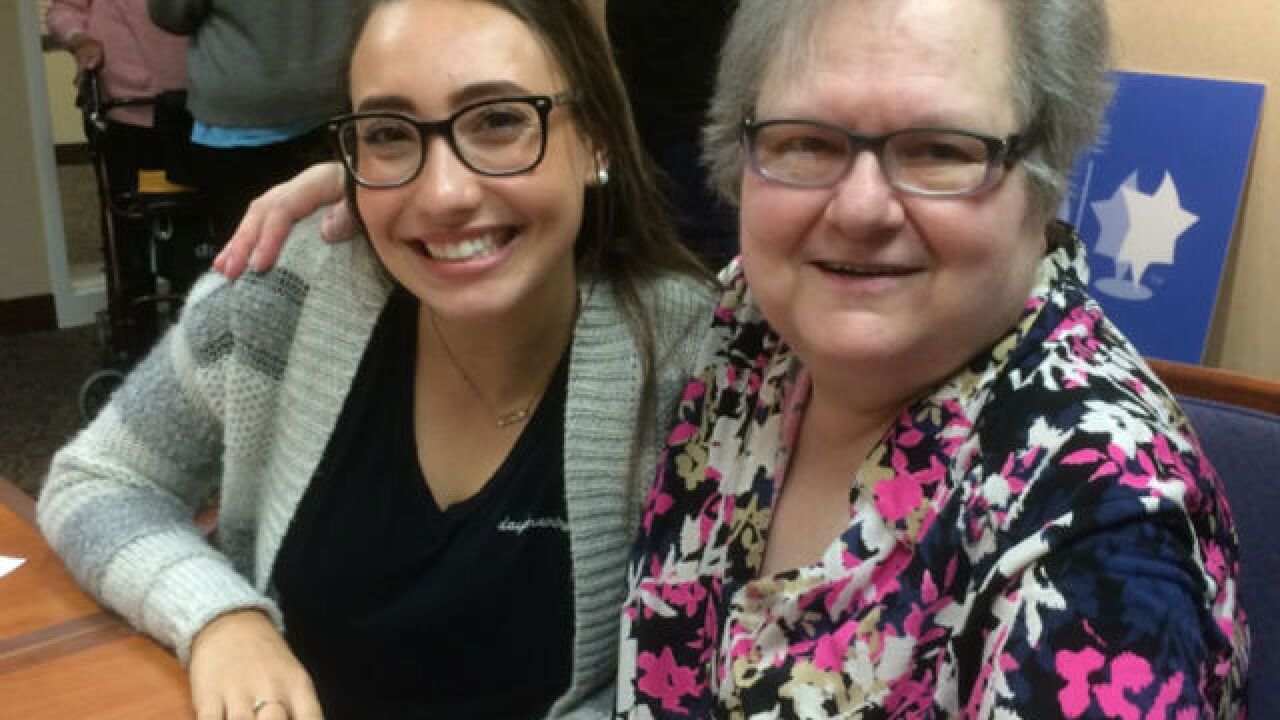 <p>Leah Mossman, 16, and Susan Ann Levin, 68, were paired together through the Mercaz High School and Cedar Village Retirement Community program. Levin is a cancer survivor who believes in the power of hope, one of the lessons she wants to pass on to Mossman, a student at Indian Hill High School. Sonia Chopra | WCPO contributor</p>

CINCINNATI -- At first glance, it may seem like the elderly in the twilight of their lives and teenagers in the sunrise of theirs might not have anything in common.

But officials at Mercaz High School in Cincinnati and Cedar Village Retirement Community in Mason think that the opposite is true -- in fact, they believe that both age groups would benefit from interactions with each other.

That’s why they created the “Better Together” program, which seeks to build relationships between teenagers and senior citizens in the Jewish tradition of passing down learning and wisdom.

There’s a word for that bond in the Hebrew faith: “Chevruta” (pronounced hev-roo-tah), which is the traditional Jewish practice of working in partnership with either one person or a small group. It involves delving into Jewish texts and building a relationship with both the texts and with each other.

To help facilitate those relationships, officials from both facilities decided to match 11 seniors with 11 high schoolers to create “ethical wills,” which will document the time they spent together.

During the yearlong program, believed to be the first of its kind in Cincinnati, the teens will join the Cedar Village residents for special programming, dinner and one-on-one time to draft the wills at both the high school and the senior retirement center.

At the second monthly meeting recently, Phyllis Binik-Thomas, liaison director for Mercaz and board member at both the high school and Cedar Village, said that every effort is made to pick seniors from a variety of backgrounds and try to pair them with teens who have similar interests.

Cantor Alane Katzew, spiritual director at Cedar Village, added that the program aims to be an “embodiment of Midor L'dor, from generation to generation, where the generations exchange Jewish learning and wisdom reciprocally.”

Teenagers will take pictures and record their sessions throughout the program, which Mercaz plans to implement for two years with the hope that its success will prompt a renewal of the program for many years to come.

“There is a parallel between teens and elderly people in the phases of their lives. The two groups could help each other to formulate their ethical values,” said Rabbi Judi Spicehandler, program instructor. “It is such a beautiful balance of teaching and learning across the generations. This is important work.”

Leah Mossman is paired with Cedar Village resident Susan Ann Levin. Mossman's grandparents passed away when she was young and she said she was always intrigued by the stories they told about growing up in the 1940s and '50s, which prompted her to get involved with the Better Together program.

“I really like hearing from another generation about living through history and I thought it would be really awesome to be connected to someone of an older generation who would give me an insight into life,” said Mossman, 16, an Indian Hill High School student.

For Levin, 68, a former elementary school teacher, guiding the young comes naturally. Levin has lived at the retirement community for nearly six years and is a cancer survivor who believes in the power of hope, one of the lessons she wants to pass on.

“I believe in one God. When you pray to God, there is a lot of power there. When I get into trouble, I always pray to God and God always answers me. I want Leah to know that,” Levin said.

Sam Vogel and Gloria Singerman, another duo paired through the program, are both deeply committed to medicine and healing.

Singerman, 89, is a former nurse who spent her career caring for her family and her patients, and Vogel, 15, a Walnut Hills High School student, wants to be a pediatrician.

“I want to tell Sam to always pay it forward by helping people,” said Singerman, who has been at Cedar Village for a year.

“I think it is a very cool idea to meet people of different generations and in your community and find ways to write down your values,” Vogel said.

“I am not sorry for anything I did. I don’t have to look back in sorrow. My eternal wish for Brooke is to go on with life, be happy and practice ‘Tikkun Olam,’ which in Hebrew means to go repair the whole world,” said Singer, 85, a former small business owner.

Singer and Goldwasser have a couple of things in common. They both have ancestors who were immigrants and they care about social justice issues.

“It’s a gift to have met and known Elaine. We are at different stages and she is teaching me how to make the world a better place and to be proud of my family’s roots,” said Goldwasser, 15, a Loveland High School student who lives in Symmes Township and plans to be a social worker.

“I want Brooke to stand up for those who need help but don’t know where to go for it,” said Singer.

Binik-Thomas said that there are quite a few advantages to bringing the young and old together, but a difference in perspective stands out among them.

“I feel like when you lived a lifetime, you understand your values in a different way than a teenager might because they haven’t lived yet,” Binik-Thomas said.

When seniors sit down to write ethical wills, they often think of the values they want to pass on to their grandchildren.

“Sometimes, though it is hard to talk to your grandchildren, it may be a little bit easier to talk to another person that age,” Binik-Thomas said. “And this is a safe place for both seniors and teenagers to crystallize ideas.”

During a recent meeting, Spicehandler handed out some examples of ethical wills to give seniors and teens an idea of what they contain. For example, in 1970, Rabbi David De Sola Pool wrote, “Life to me has always been joy and humor and laughter and happiness.”

Some are short and simple, like the will of Rabbi Monroe Levens, who wrote in 1973, “Life here is a great and wonderful adventure. It may be a greater and more thrilling adventure there.”

Others are somber in their reflection of their Jewish heritage, like Emil Greenberg's ethical will written in 1965.

“Always remember your heritage, millennia-old, the unbroken continuity and tradition literally paid for in blood and torture,” Greenberg wrote.

Through the program and by reviewing and writing the ethical wills, it's clear that the teenagers feel the weight of both their legacy and their responsibility as they talk to the seniors, but it also seems clear that the past is only a part of it.

At the program's core is the future, bright with possibilities.