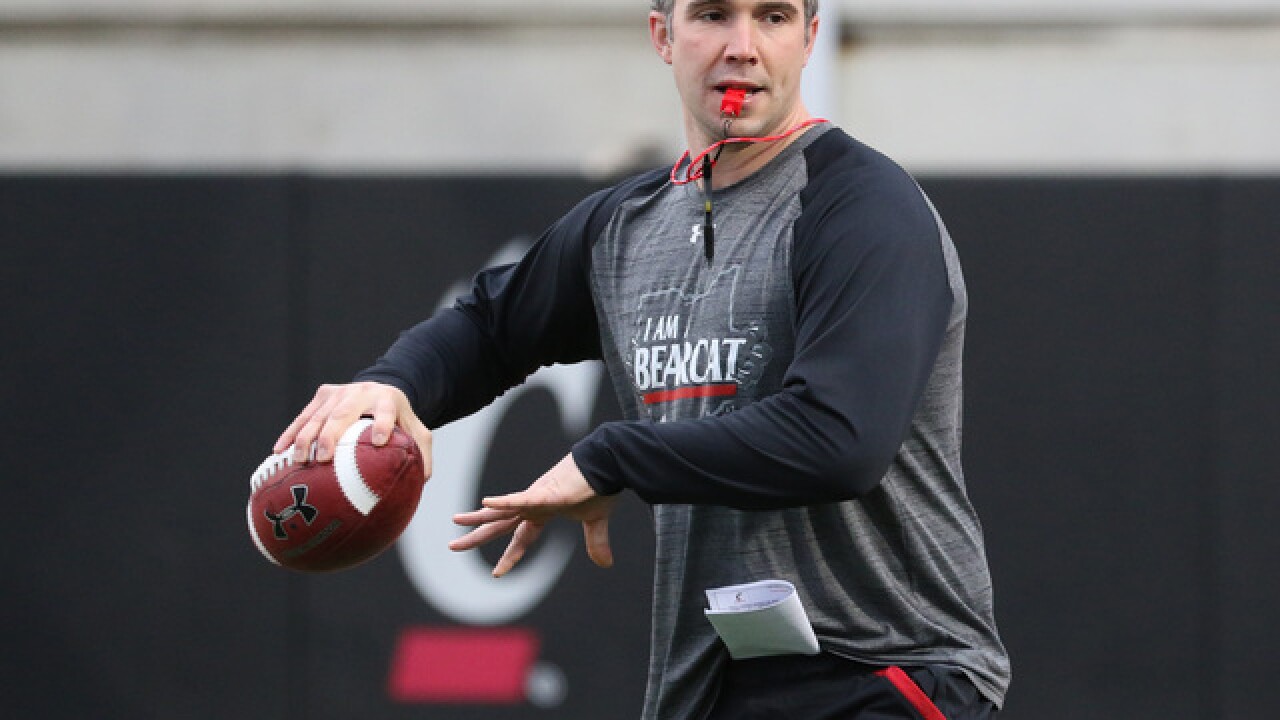 CINCINNATI -- Thirteen years ago, Gino Guidugli was wrapping up a University of Cincinnati Hall of Fame football career and awaiting his professional future.

He had big plans, namely a career as a successful NFL quarterback. After an eventual retirement from the sport, he figured he'd live a long existence pursuing activities he enjoyed.

That's not what happened.

"Life has funny ways of working out the way it's supposed to," Guidugli said at a recent UC football practice.

Guidugli made it to the NFL, but just for one preseason with the Tennessee Titans in 2005. His playing career took him to unexpected destinations in the Arena and Canadian football leagues. Then he turned to coaching -- something he never expected -- as a grad assistant at Central Michigan in 2010.

After six seasons with the Chippewa program, UC coach Luke Fickell brought Guidugli back to his alma mater as the Bearcats' running backs coach.

"It's cliche to say it's a dream come true, but I was telling my guys the other day -- I got up to speak in front of the offense -- and the first day at work when I came walking down from Calhoun Street and saw the stadium and the scoreboard lit up, I got the same feeling I did when I walked on campus as a player," Guidugli said.

"It's a special place. I'm really happy to be home, be around family and friends, and get to coach these guys."

Guidugli's return came to fruition shortly after Fickell's hire in December. Although Guidugli didn't know Fickell, he was aware that former UC coach Mark Dantonio did. He asked the Michigan State coach to make a call, and the connection paved the way for Guidugli's hiring in February.

The last six months, Guidugli said, have been hectic and amazing.

After moving to Union, Kentucky, Guidugli and his wife, Michelle, welcomed a son, Ezra. The 2-month-old joined older brother Ryland, 2.

Guidugli led UC to three bowl games in four years as a starter, but his beginnings in the UC program weren't so auspicious. The former Highlands High School standout was charged with underage drinking, which later was dismissed, and misdemeanor assault for punching a player at an intramural basketball game.

His sentence for assault was house arrest, including an ankle monitor, and probation. Guidugli essentially lived under "dorm arrest," as he largely remained on campus during those 60 days in order to devote time to football preparations and activities.

He still has thoughts on the matter that he prefers to keep to himself. But he wishes he'd have done a few things differently during that time.

"I wish I would have grown up a little bit quicker my first year on campus," Guidugli said.

The day Guidugli was permitted to remove the ankle monitor was practically ceremonious. He was at Higher Ground, where the Bearcats conduct preseason camp, and his teammates were well aware of the day's significance. They crowded around Guidugli and cheered as the monitor was removed.

"It was embarrassing leading up to that point, but once I got it cut off … it was like you were blowing out birthday candles on a birthday cake," Guidugli said, laughing. "I'm sure every guy that was on that team can remember that."

His playing opportunities after UC came with the AFL2's Green Bay Blizzard, the AFL's New York Dragons, the CFL's British Columbia Lions and the AFL's Milwaukee Mustangs. He passed for 4,872 yards and 86 touchdowns for the latter team in 2012.

He said those football experiences provided "some of the best times" of his life.

"Regardless of how much money I was making playing Arena or playing in the CFL, those experiences will last me a lifetime. I made some lifelong friends and got to travel and see different parts of the country. It was a great experience and an awesome time," Guidugli said.

He was equally grateful for the opportunity to coach at Central Michigan. After his time as a grad assistant, he served as the running backs coach and recruiting coordinator from 2013-16. He was promoted to offensive coordinator and quarterbacks coach after last season.

Proud to be a Bearcat again, Guidugli is eager to see what this football season brings. He doesn't have to wait long; Game One against Austin Peay is 7 p.m. Thursday at Nippert Stadium.

It's part of a journey that has been far better than he ever imagined.

"I've got a great group of guys I work with, staff and players," Guidugli said. "My family and my support system is here and the fans of Cincinnati are great. I'm super excited to be back. It's been a pretty easy transition, but we haven't played a game yet. I'm excited to get the season underway and see where it goes."