Captain for a day: Local nonprofit partners with Reds to offer life-changing experiences 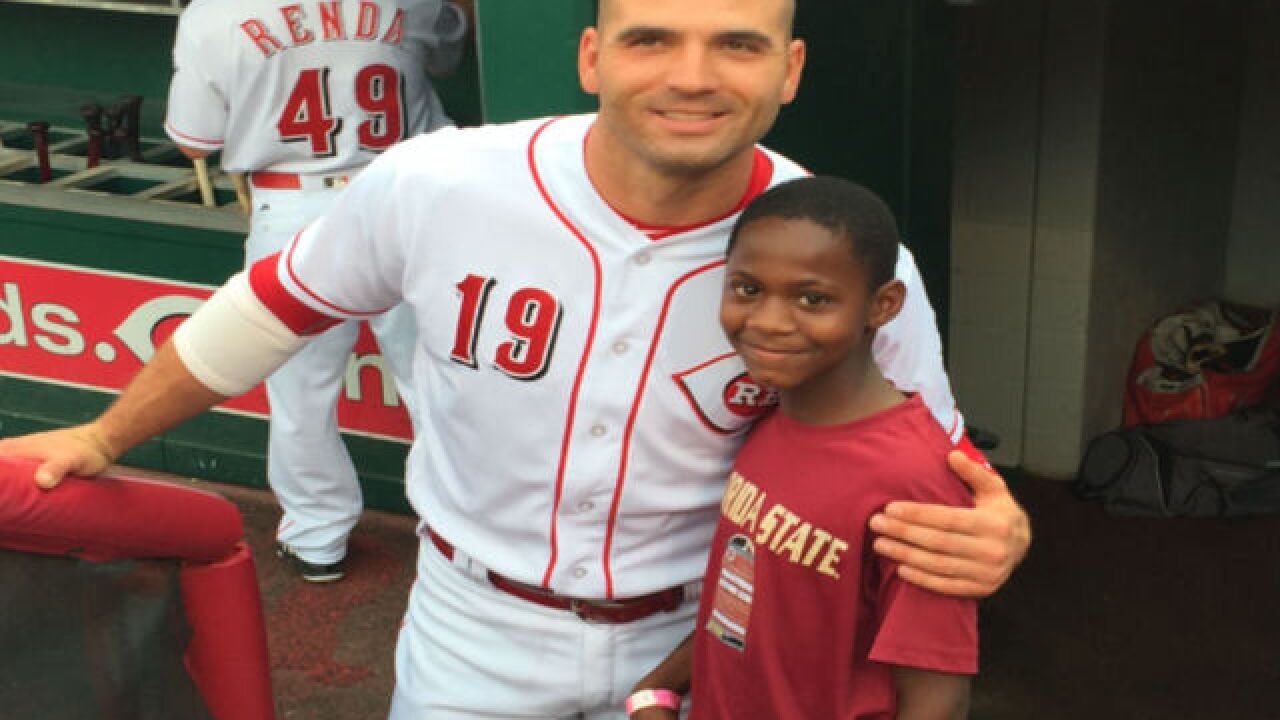 The 12-year-old couldn’t believe what he was seeing. He walked through the dugout, past the athletes warming up with their bats and gloves. Was it real? After all, few children get to see a Cincinnati Reds batting practice up close.

Steven shuffled past the bench, quiet and respectful. Then, just mere feet away, he saw his favorite player, Joey Votto. Steven was even more stunned.

Votto caught the child’s eye and the ballplayer made a friend for life when he approached Steven and introduced himself. The two chatted for a moment before posing for a picture and sharing an embrace.

Talk about a moment.

It was just another way the Reds have reached out to make a lot of kids feel special. Then again, the kids are pretty special, anyway.

Steven was one of about two dozen Boys Hope Girls Hope of Cincinnati scholars at the Aug. 2 Reds game. Boys Hope Girls Hope is a local nonprofit that provides scholarships for low-income children to attend private schools and find their way out of poverty through education.

Each month, the children participate as a “Captain of the Game,” and once a season they watch the Reds take batting practice. They go out on the field, get introduced and get to hand lineup cards to the umpire.

“As a child I was like many of the kids at Boys Hope Girls Hope. The only thing I had to look forward to was a Reds game,” said Debbie Bowman, president of the nonprofit. “The only way I could go is if I got straight A's because I received tickets from the Reds. To lead an organization now that helps kids with promise and lets them experience things that they might never have an opportunity to experience is phenomenal.”

And for someone like Steven, who got to meet his idol, it’s something he’ll never forget.

“Our scholars are thrilled and honored to be at a Reds game, many of them for the first time,” Bowman says. “The thrill I had when Stephen got to meet Joey Votto -- wow, that will be etched in our memories for the rest of our lives.”

A year ago, Sukanya Madlinger, a Boys Hope Girls Hope board member and then-president of Kroger's Cincinnati division, reached out to the Reds to see if there was an opportunity for them to partner with Boys Hope Girls Hope. The Reds then reached out to Procter & Gamble, which partnered with Kroger to support a sponsorship of “Captain of the Game.”

“I’ve personally been involved in Boys Hope Girls Hope since 1998 as a board member and volunteer,” said Madlinger, senior vice president at Kroger. “I couldn’t be more proud to be a part of such a great organization and partnership. We really are making a difference in the lives of kids in our community.”

And just like that, the opportunity was born: a three-year commitment to showcase Boys Hope Girls Hope, said Dave Collins, director of sponsorship development for the Reds.

“We are pleased to provide exposure and awareness to Reds fans for all the great work that Boys Hope Girls Hope does,” he said. "Supporting great local organizations is a Reds priority from the top down.”

On Aug. 2, the scholars, staff members, and supporters were treated to an evening of Reds baseball, food, bullpen deck seats, and recognition from the field in front of the community.

So much so, in fact, that the young scholar has written a letter to Votto thanking him for the experience.

“I was almost in tears,” Steven wrote to the baseball star. “By the way, we should hang out. I would gain so much popularity in school. Thank you so much.

Currently, BHGH of Cincinnati is serving 30 elementary through high school scholars and 13 collegians. It has a wait list of 34 potential scholars from Northern Kentucky and Cincinnati.

Since 1991, 100 percent of the scholars have attended college.

Of that 100 percent, 92 percent return for their second year of post-secondary education -- that's 30 percent higher than the national average.