Can't get to Newport? The aquarium will now bring its sharks to you

Touch-tank on wheels is making the rounds 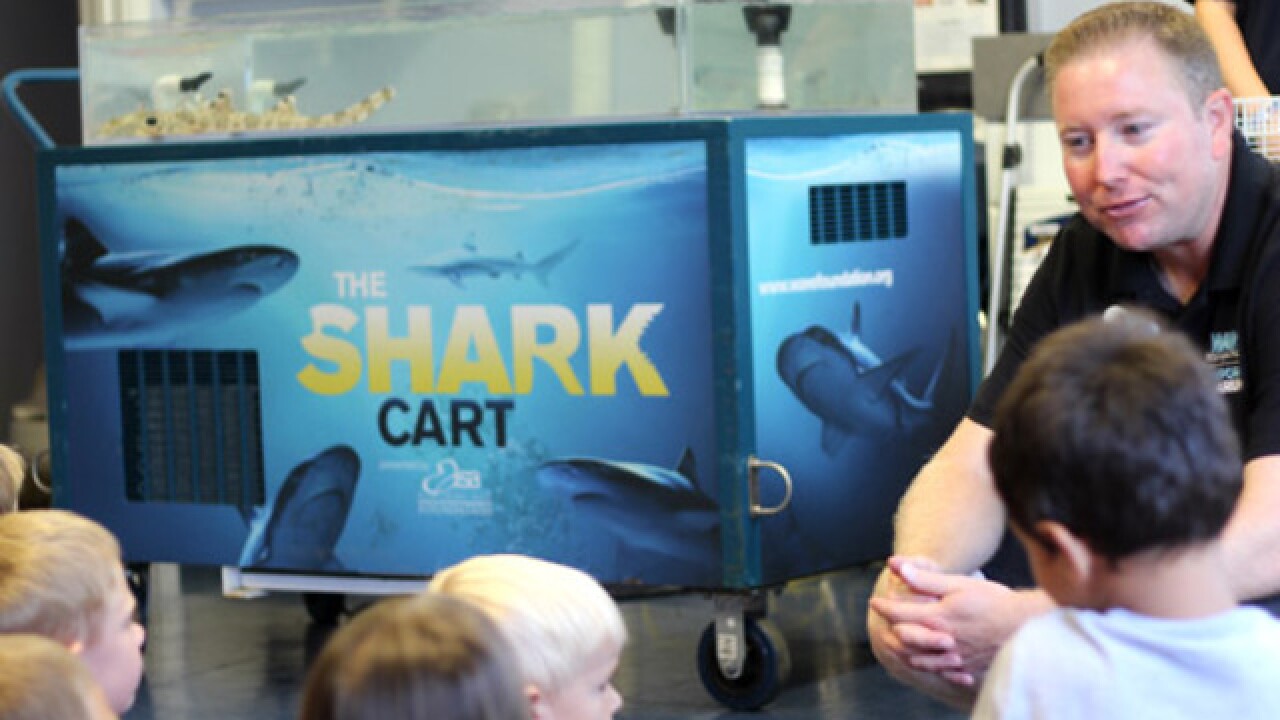 While the first two may elicit some trepidation, the aquarium's mobile shark touch-tank is designed to do just the opposite, says WAVE Foundation education curator Daniel Dunlap. The team of traveling epaulette sharks -- named Apollo, Clubber and Rocky -- act as ambassadors for their species, he said, debunking the myths and mysteries.

Since the shark cart is the only one of its kind in the U.S., Dunlap said, they've been solidly booked since it rolled out in July 2015, including a visit to the floor of the House of Representatives in Washington, D.C., while politicians discussed ocean conservation.

"We were just trying to build a program that's not like any other," he said. "We just thought to ourselves, how can we make it different, how can we provide something that other zoos and aquariums aren't providing -- so we created a mobile shark tank."

Two years ago, the WAVE Foundation hired engineering firms to design components including the wheeled, 4-foot aerated cart, a mobile water pump, a hydraulic lift to move the cart in and out of the transportation van, and temperature-regulated coolers to transport the sharks. Ironically, Dunlap said, sharks -- like people -- get seasick with motion when they can see out, so they keep the coolers dark, aerated and toasty to about 70 degrees to ensure the small Australian reef sharks remain as cozy as possible.

"Our sharks can go out every other day, because they need a day off from moving and the transport," he said. "Today we're going to a daycare with real young kids, so a lot of it is just about the hands-on learning and exploring."

The final step before heading out involves collecting Part 2 of the presentation: Green Bean the African penguin -- one of eight females that participate in the outreach. Dunlap said the first priority is always safety any time they take an animal out of the building.

"I'm an educator. I'm not part of the husbandry team who takes care of the animals every day, " he said. "But we have all of their protocols in place and they totally trust us because we go above and beyond what's called for on the safety of the animal -- whether it's sharks, whether it's snakes or whether it's a penguin."

On this July morning, the van traveled just 15 minutes to reach its destination, the Rainbow Child Care Center in Independence. Rainbow assistant director Nikki Evans said she was looking for an exciting activity to engage both the younger and older children at the center during summer camp and happened to find the animal outreach on Newport Aquarium's website. Taking a field trip is always an option, but she said this worked out better logistically, allowing more children to participate.

"It's just a whole new experience for the kids because they haven't seen these animals in their classroom," she said. "I think all of them are in amazement that a penguin and shark are going to be here. They're trying to figure out how's that's happening."

After having children take a seat on the floor, Dunlap shared facts about shark behavior and conservation, then Hall carefully guided them through the touch-tank experience. Next, major "oohs and ahhs" erupted when Green Bean the penguin waddled from behind the scenes to stand directly in front of the seated audience. During the presentation, she studied some of the children, honked and performed her "happy dance" when Dunlap scratched her feathers. Because the outreach penguins were hand-reared by humans, Dunlap said they feel completely comfortable, since they imprint on the first species they see when they hatch from the egg.

"So they either think they're little humans or they think we're big penguins," he said. "They love going out. It's enrichment for them."

Children could still be heard giggling in the hall following the encounter. After getting her own shot to say howdy to Green Bean, Evans said the kids and teachers alike had been looking forward to the event all week. Children showed up dressed in shark T-shirts and one mother brought her infant in to be photographed, since the baby's dad is such a shark fan.

"It's so fun and it's such a cultural experience for them to be able to get to touch and see things that they would not be able to see in their backyard," she said. "And it's just the education aspect of it, how to treat animals, how important they are to our environment -- it's just huge."

As the nonprofit arm of the Newport Aquarium, the WAVE Foundation provides education, conservation and volunteer programs to engage the community in the importance of aquatic life, Dunlap said. While there's normally a fee to provide an outreach experience, he said they also provide free encounters as part of their Community Outreach Scholarship Fund to schools with a high percentage of children who participate in the free and/or reduced lunch programs.

"Some of these places we go to, these kids have never set foot outside the county and now they're getting to touch a real-life penguin or shark," he said. "It's just an amazing program and experience for them as well."

In addition to daycare centers and schools, Dunlap said they've visited countless libraries and senior centers within the Tri-State region. He said they are one of the few mobile animal outreach programs willing to travel pretty much anywhere logistics allow. He said their goal for 2016-17 is to visit all 120 counties in Kentucky with mobile outreach, then add all Ohio and Indiana counties by 2020.

"We put a lot of miles on this van," he said. "Courtney is one of my wonderful volunteers who has spent a lot of time sitting in that seat as we drive all through the Midwest. We were in West Virginia a couple of weeks ago. We took a penguin out there. So there's no area we won't travel to as long as it's not logistically possible and the health of the animals are fine. It's just a way to separate ourselves from the competition."

Following most encounters, Dunlap said, the facilities they visit always want to know what other experiences they have to offer.

"Ideally, we'd like to add a mobile stingray touch-tank by next year, but that's still in the works," he said. "But I always know I've done my job if when we're leaving they're already asking when we can come back."

Watch the WAVE workers prepare the sharks for transport here: