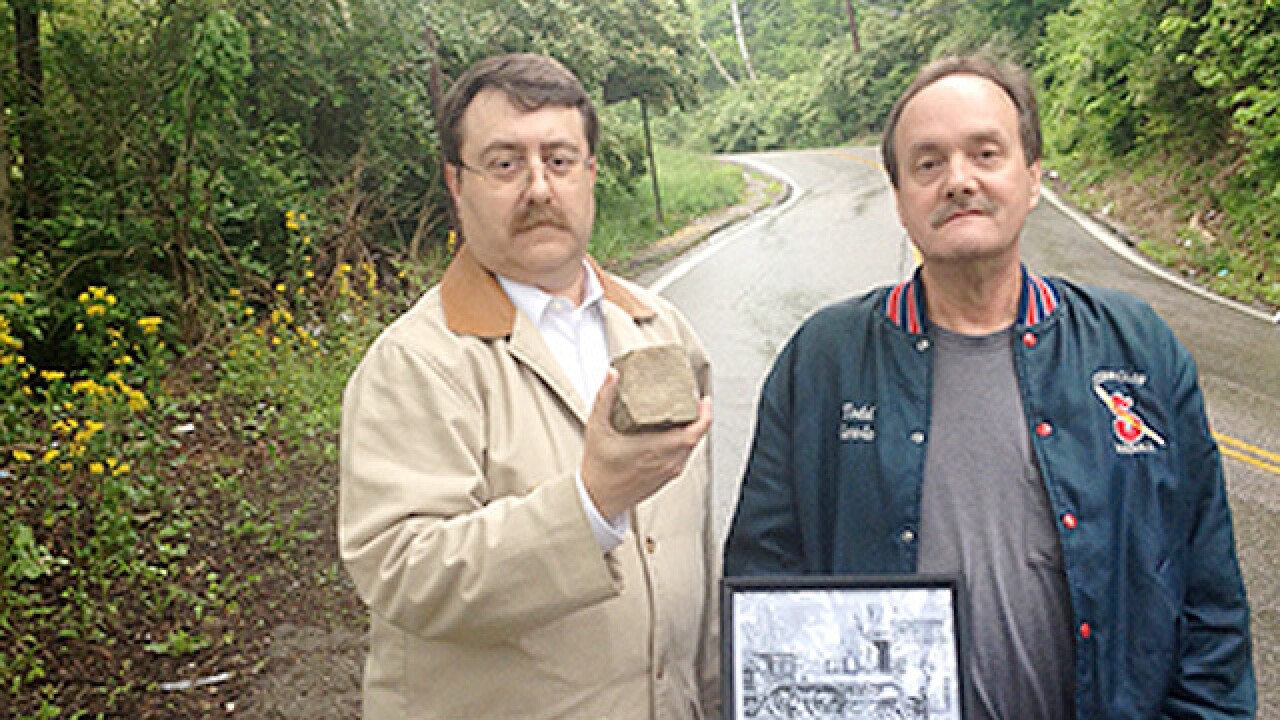 Brent Coleman
<p>Dave Pittinger, left, and Robert Carter stand on Faraday Road below where the train tunnel emerged from Roll Hill behind them. Pittinger holds a brick he thinks came from the tunnel. Carter holds a photo of an 1854 train engine.</p>

CINCINNATI -- This could be Cincinnati’s ultimate urban legend: the story of a 250-foot hill, its 160-year-old railroad tunnel, a deep sink hole and a couple of guys rappelling from a long rope down into it to spy the remnants of an 1850s steam engine.

It’s a story that’s been kicking around for more than 50 years among hobby historians and railroad enthusiasts who believe the engine is still there. It could be a story with a future now that technology has given scientists the ability to see farther into the ground than ever before, using magnetic resonance, core drilling, remote cameras or even drones.

Like two treasure-seeking boys, College Hill resident Dave Pittinger — a history buff who has amassed a research file on the tunnel and train over the past 33 years — and Bridgetown’s Robert Carter — a Cincinnati native whose family owned the hill until 1957 and spread the legend for decades — are still reaching for the brass bell.

Pittinger hopes unearthing the buried train story will stir some deep pockets and that people of authority will back an effort to find and excavate the engine. Four things, he said, need to happen: gain access, maintain safety, get private financial support and get technical and mechanical help.

“It’s there, and someday, somebody will pull it out,” Pittinger said of the train engine. “People say you can’t do it, but I’ve seen when only one call can make things happen.”

Pittinger and Carter have little more than historical maps and eyewitness stories to go on in their search for the engine. But they believe it and its 2-foot-diameter brass bell and copper boiler must be there — 50 or more feet below the top of Roll Hill, somewhere along a railroad tunnel that was to be 2,900 feet long.

Years ago, Pittinger spoke to an excavator, Ronald G. Miller, who was part of a city crew clearing land for the Fay Apartments public housing project — now the Villages at Roll Hill — in about 1960. Miller told Pittinger he saw the train but couldn’t remember where it was buried along the tunnel that was built by the financially doomed Cincinnati Western Railroad around 1855.

“He was pretty up in years and couldn’t remember which end (of the tunnel the train) was near,” Pittinger said of Miller. “They were excavating for the foundations of Fay Apartments, and the ground started sinking in. A tunnel was revealed.

“He tells me they came back at night when they weren’t supposed to, and he swears he and another guy took a long rope, tied it to a tree and went down in there and saw a brass bell on a yolk and a copper boiler. It was some kind of train, but he couldn’t tell because there was too much dirt collapsed on it,” Pittinger said.

Miller told Pittinger, “’We almost had it. People up there know we saw the bell, and we were trying to get the bell out.’”

Carter said no one in the Roll family — whose ancestor, E.C. Hill, owned 6,168 acres in the area at the start of the railroad era — saw the 1960 sinkhole. It was filled with concrete immediately. In 1971, while building Interstate 74, DeSalvo Construction Co. workers discovered the northwest entrance to the tunnel near a sharp turn on Faraday Road. The tunnel was caved in not far from its opening. Officials were called in, and a team of University of Cincinnati geologists deemed it too dangerous to explore. The entrance was closed permanently.

Three local train buffs searched for the locomotive in 1995 by digging 40 feet into private land on Roll Hill. Their search for what they believed was an 18-foot-long, 10- to 15-ton engine came up empty.

Engine Likely a Small One

For decades, Carter and his Roll relatives have been curious about the legend of the train tunnel through Roll Hill, which some locals sometimes called “Railroad Hill.”

He said he believes the engine is what is known as a “dinkey,” a compact steam engine that would have carried tools needed to lay track. Other than its bell and boiler, the small engine would have been made of iron that was susceptible to rapid decay in the wet conditions that exist in historically unstable Roll Hill.

“It would be in horrible shape, all rusted to pieces,” Carter said.

Unless the train engine is in an air pocket, Pittinger said, “I have a feeling we’re going to pull out a wreck. The copper would be tarnished, but anything brass or bronze could be intact in a tomb, much in the same way you have in Egypt.”

Fellow urban legend-believer Riley Humler of Pleasant Ridge added: “Yeah, but every wrecked car can be renovated. The thing is, if that 2-foot-wide brass bell is there, then there’s got to be more than a little mule with it. That’s a big mule.”

No matter its size, Pittinger said, it’s a piece of history that “belongs to the people of Cincinnati in my mind. It’s part of the heritage of our city.”

Digging up, preserving and sharing a unique piece of Cincinnati railroad history would be “the verification of the ghost legend” that Pittinger hopes to achieve.

“It would be fantastic to see and say, ‘Yes, there it is,’” Carter said. Then the boy in him comes out: “Kids around here have been dying to find this thing.”

The 1851-founded Cincinnati Western Railroad raised $2.3 million to build standard-gauge tracks from Cincinnati to Chicago that would have given Indiana farmers better access to the largest markets in the Midwest. The railroad hit a snag, however, at Roll Hill, which blocked its line into the Mill Creek Valley and downtown Cincinnati.

Cincinnati Western planners determined the route around Roll Hill was too curvy and decided to tunnel through it. It isn’t known how much of the tunnel was completed when workers — angered because the fledgling railroad company hadn’t paid them — reportedly blew up the southeast end of the tunnel, closing it off for good.

Not long after, Cincinnati Western ran out of money and halted the railroad project. By 1860, the company and its failed project were forgotten. A few abandoned earthen works along the line to Indiana exist but are overgrown, as are the northwest and southeast entrances to the Roll Hill tunnel.