Broo View: Will USA men win World Cup in your lifetime? Depends how much time you have. 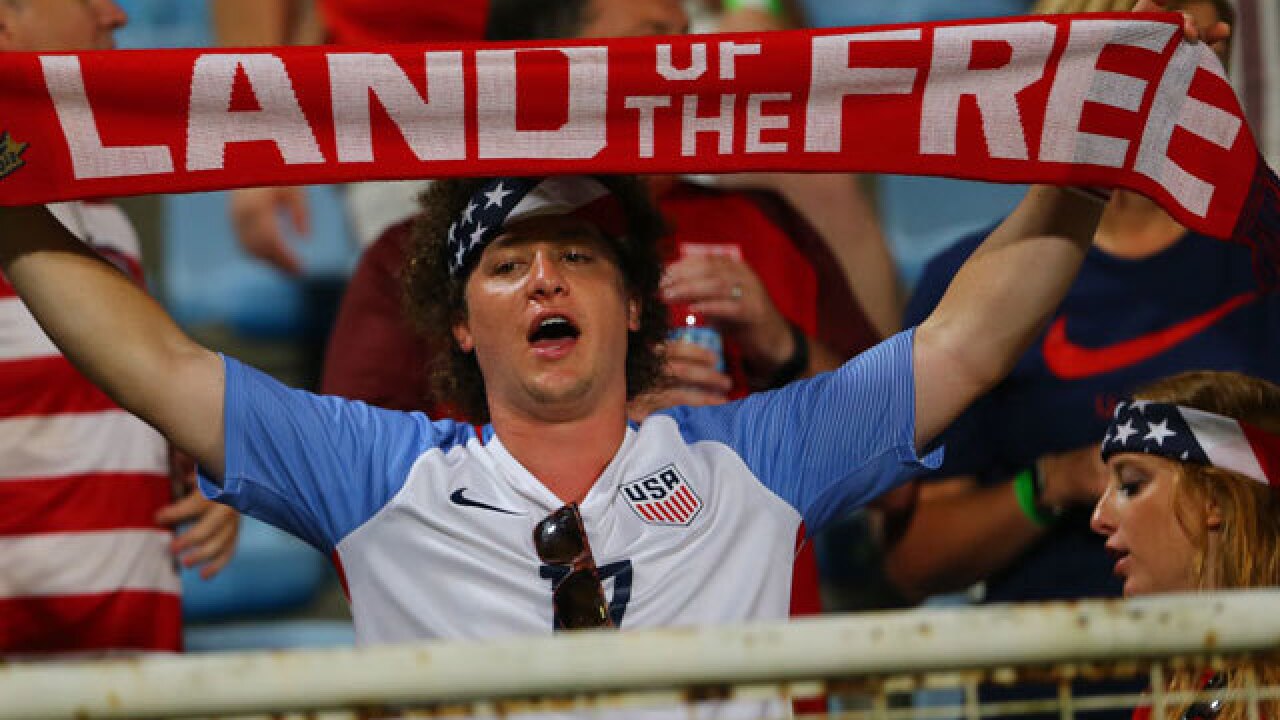 Image copyright 2017 Getty Images. All rights reserved. This material may not be published, broadcast, rewritten, or redistributed.
Ashley Allen | Getty Images
<p>A fan of the United States Men's National Team shows his support during the FIFA World Cup Qualifier match between Trinidad and Tobago at the Ato Boldon Stadium on Oct. 10, 2017 in Couva, Trinidad And Tobago. </p>

Q: Will the USA men win a World Cup in your lifetime?

A: How many years you figure you got?

That the USA isn't involved in this year's World Cup competition is a criminal indictment of the people who run the United States Soccer Federation. Period.

USSF leadership has changed, somewhat, in the wake of this country's anemic effort to qualify for the 2018 Cup, but the problems with soccer in our country run deep. They won't be fixed by simply "changing the guys in the suits." The USA Men's National Team seems to be in a state of chaos right now.

Jeremy Lance is a Cincinnati guy who co-hosts a terrific podcast called "Wrong Side Of The Pond."

"Chaos would be an apt description for it," he said. "It's a transition period from a player standpoint. The Federation has an election where they elected new leadership, in name, leadership that still had some holdovers from the previous leadership."

What got us to this point? And how historically bad is it?

Well, all things are relative. The USA didn't qualify for a World Cup between 1954 through 1986. Compared to that run of nine straight Cup misses, what has happened this year isn't all that bad.

Four years ago, the USA made a nice run and got to the "knock-out" round, but the team was aging. The coach, former international star Jurgen Klinsmann, hardly inspired faith in his team or our country's soccer efforts when he said on the eve of 2014 Cup Play, "We can not win this World Cup because we are not at that level yet."

Yeah, let me play for that guy.

Klinsmann was fired before qualifying for the 2018 Cup and replaced with a retread, Bruce Arena. His heavy-handed style and arrogance wore on the players trying to qualify the USA for this current Cup, but, in his defense, he was coaching a team that was uniformly either too old or too young.

It begs this question: where are the "great" soccer coaches in America and why hasn't the USSF found one?

There is a new general manager, and former US playing star Ernie Stewart is searching, but why is that search so difficult? At all levels in the United States, quality coaching abounds. Lance told me that he wonders the same thing, too.

"We have good coaches," he said. "I don't know if we have one yet who's great and can take the National team to the next level. 2014 was good and soccer is growing. We don't have to just qualify for the World Cup; we have to take it to the next level."

Colombia, which has a population of about 49 million, qualified for this year's World Cup. Morocco is there, too, representing its 35 million citizens. All 7 million Serbians are screaming for their own team.

Let's not forget about Iceland. Reykjavik's residents were rocking during this Cup -- all 122,000 of them. Iceland, home of great waterfalls, WOW Airlines and only about 32,000 inhabitants more than the Cincinnati metro area, is a Cup country.

The United States currently has more than 327 million people. Why can't we find 11 adult men who can play soccer well enough to qualify the USA for a World Cup?

Exactly 68 years ago this week, the USA World Cup team stunned England, beating that epicenter of soccer 1-0 in the 1950 Cup.

A month before traveling to Brazil to play in the Cup, every single one of the Team USA members were in the States practicing their chosen professions. One USA player taught high school. Another was a dishwasher. The goalkeeper who pitched the shutout in that match, Frank Borghi, drove a hearse. Borghi fought in the Battle of the Bulge during World War II and won a Bronze Star and Purple Heart. It was largely regarded as a team of rank amateurs. But the USA beat one of the world powers.

So what's the problem now?

"You look at Tyler Adams, who plays for the New York Red Bulls, a midfielder who's 19, and he's making a case that he could be a starter for the USA, already," Noah Davis, executive editor of America Soccer Now , said. "Weston McKinney, who came up through FC Dallas' system and is now playing in Germany, a program that's one of the best out there. It's a slow process."

The current USMNT also has defender Matt Miazga, who has played in MLS and now plays for the storied Chelsea side in the English Premier League. Another USMNT defender, Erik Palmer-Brown, plays for Manchester City. The current roster sports players who have experience in MLS, Germany, Mexico and France. These guys aren't good enough to get the USA into the Cup, let alone win?

"Oh, we have talent," Lance told me. "But the guys you just mentioned are all in their early 20s. Were they ready to go in this last cycle? Largely not. We used older players and that didn't work out. They lost some matches they had no business losing. And using them didn't work out."

Here's what I think. We live in a country where the economy, even in the bad old days of the late 1970s, has been largely robust for the past 70 years. We've got money. We have the best health care and training facilities of any country in the world. We've got the best doctors and athletic trainers.

We also have other things countries like Tunisia, Croatia and Peru don't have: Major League Baseball, the National Football League and the National Basketball Association. Most countries' governments fund their national programs, with players earning far more than what they would if they simply held "real world" jobs in their homelands.

For soccer in America, those are real problems.

There is one thing all elite athletes have in common: They want to make money, as much money as possible, using their athletic skills. At a very early age, certainly by high school, an athlete who has a choice between soccer and basketball, football or baseball will usually choose one of the latter three because ultimately that is where the money is.

If Biff from Barnesville, Kansas, has a chance to play in the NFL or pursue a career in MLS, how long do you think he'll have to make his mind up on that one?

Few players on any MLB, NFL or NBA roster make the minimum, and a gifted athlete in any of those sports would most probably be drafted, earning enormous bonus money on top of a yearly salary.

Now that we know the problems, where are the answers?

Davis says there is no "quick fix."

"It's a slow process," he told me. "It's not something where you can flip a switch and say, 'Go,here's a bunch of money,' but I do think there's starting to get to the depth they need to produce elite talent."

Depth comes in all shapes, sizes and colors.

Though some who live in the West End of Cincinnati may not embrace it, building a soccer-specific stadium there may go a long way to fixing USA's soccer problem. The guy running MLS is the brains behind it. MLS Commissioner Don Garber was reportedly adamant that FC Cincinnati build its stadium in an urban environment. It apparently is the model Garber and his group wants now.

Culturally, soccer in the USA has an image problem. It's perceived as a sport that caters to a white, affluent, suburban crowd. Whether that's reality is wrapped up in research somewhere, but image is often reality. It's an image soccer must change if it's to grow in this country, as it has everywhere else around the world.

Soccer has always been the sport of the future

In the 1970s, when the North American Soccer League was the first incarnation of professional soccer trying to make it in this country with stars like Giorgio Chinaglia, Franz Beckenbauer and the great Pele, teams struggling to fill the stands would say, "Just wait." All we had to do was just wait for the kids playing grass-roots soccer to grow up and begin buying tickets to NASL games.

The league, at that level, folded. Soccer went into a death spiral until the 1990 Cup, when the USA finally qualified again after nine failed efforts. It's not quite in that death spiral now, but warning signs abound about the USA's strength on the international stage. To overplay them would be disingenuous, but to ignore them would be irresponsible.

I have a mission statement for the new group running the United States Soccer Federation: "Never again. Never again let a US Men's National Team fail to qualify for a World Cup."

Chances are, the USA won't win a World Cup in my lifetime. Maybe it won't in yours. There's no way to know for sure unless we get there.

Now then, some odds and ends

A monumental anniversary in the world of music happened this week. 50 years ago this Wednesday, Elvis Presley's NBC-TV special, dubbed "the comeback special," was recorded. It was a re-introduction of Elvis after years of strictly appearing in movies. It was taped in Burbank, California, in front of an intimate gathering, and the show ended with this song.

The show's musical director, a songwriter by the name of Walter Earl Brown, wrote this. The show's producer, Steve Binder, asked Brown to write a song that might be befitting of the times, as the show was taped just after the assassinations of Martin Luther King, Jr. and Robert Kennedy. At first, Elvis' manager, Colonel Tom Parker, said Presley wasn't going to sing it. He wanted Elvis to sing a Christmas song, as the special was going to air the following December. Presley overheard Parker say that and overruled his manager.

The version that made the air in the special, this version, was recorded in a studio later in the summer of 1968, because the original was simply not a good recording. By the way, Brown wrote this song in just a few hours. It turned out to be a masterpiece, and it might've been the best song Elvis Presley ever sang.

You can be the judge of that.