Broo View: What needs to change for the 2018 Bengals 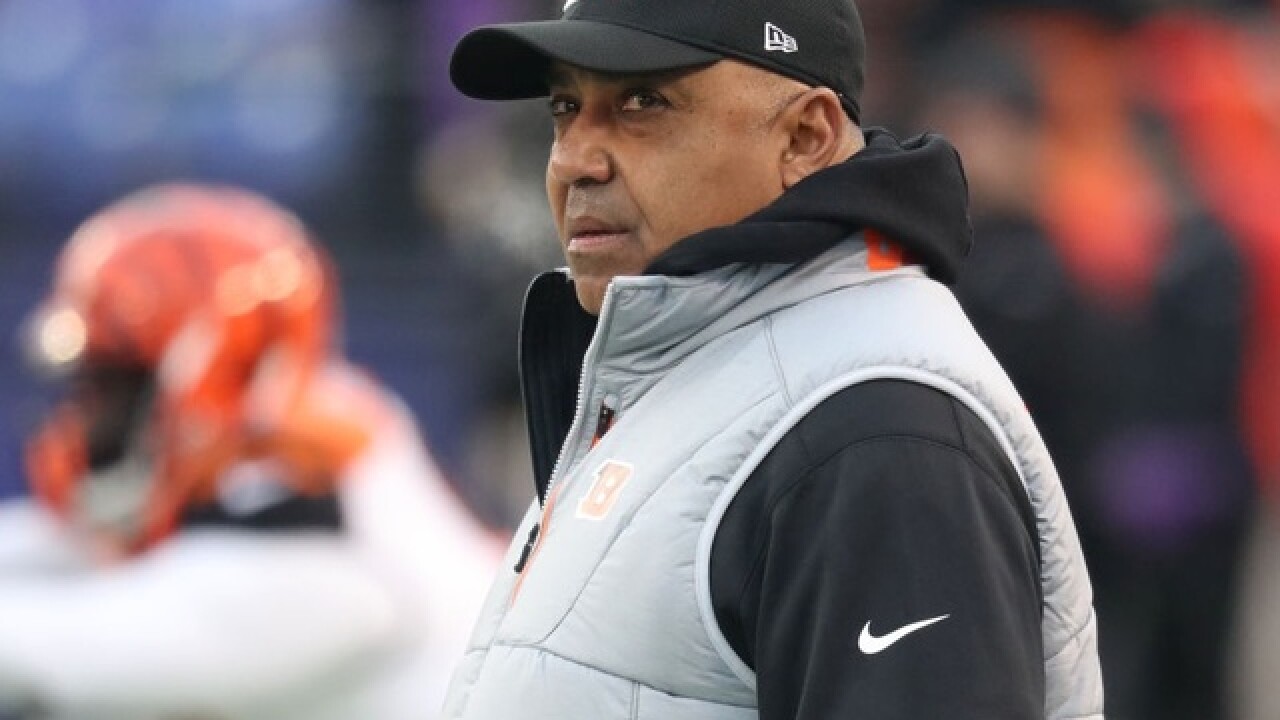 Copyright 2018 Scripps Media, Inc. All rights reserved. This material may not be published, broadcast, rewritten, or redistributed.
Rob Carr
<p>BALTIMORE, MD - DECEMBER 31: Head Coach Marvin Lewis of the Cincinnati Bengals looks on from the sidelines prior to the game against the Baltimore Ravens at M&T Bank Stadium on December 31, 2017 in Baltimore, Maryland. (Photo by Rob Carr/Getty Images)</p>

Something had to change in Bengal-dom.

Marvin Lewis is staying, but the cast around him is shifting, like a 70's rock act that keeps the front guy but brings in a new guitarist and keyboard player.

It's hard to fire players still on the books with bonus money, and when you don't want to fire the head coach, the next heads on the block are those attached to assistants. The Packers have completely redone their coaching staff and kept their head coach. The Seahawks have done the same.

Out are longtime assistant head coach and offensive line coach Paul Alexander and Paul Guenther, now in Oakland with the $100 million man, Jon Gruden. "Paulie G" saw the handwriting on the wall: He could stick around here for another couple of years on the off-chance Lewis would leave Bengals would turn to Guenther as their next head coach, but he'd already played that game for two seasons without success.

Along with him, the Bengals adios'd or said adios to their defensive backs coach, their wide receivers coach and they're still looking for a quarterbacks coach. The times, they are a-changin'.

Which brings us to the new guy running the defense. Teryl Austin has been coordinating the Lions defenses for the past four season. He's had a couple of outstanding years there, one not bad and one so-so. Austin is already busy trying to make the Bengals defense more of a play-making group, not just a collection of tacklers.

"It's like anything else in coaching," Austin said at his introductory news conference. "You kinda get what you emphasize. And I know for a few years, our first year we were really good and then fell back a year. And then we had talked about it, tried to emphasize it. But then, this past off-season, I really, really dove into making sure we emphasized it more. We ran more drills, more take-away drills. We kept that going throughout the entire year. I think it paid off."

Austin also has a chance to work with a coach whose 'tree' is ever expanding. Four current NFL head coaches, 1/8 of the NFL, have worked under Marvin Lewis. Austin maintains that's more of an appetizer than a meal.

Here's the first thing Austin can do to improve the Bengals defense: Keep Burfict on the field. He's played just one complete season since joining the Bengals in 2012, and the team needs him. Burfict is more than just a good player. He's a team leader.

Regardless of what you think of his 2016 playoff meltdown, the Bengals are better with Burfict on the field than off. Period. End of story.

Austin also inherits some other very good players. Geno Atkins remains one of the best interior defensive lineman in the game. William Jackson III is quickly emerging as the Bengals top cornerback, and although he's quickly overtaking them for top CB on the team, Dre Kirkpatrick and Darqueze Dennard remain talented.

Smart money says Adam Jones won't be back, but I wouldn't be so quick to make that bet. Like Burfict, despite the playoff meltdown a few years back, Jones is a charismatic team leader. He most probably isn't a starting corner anymore but in the right circumstance, Jones can still play. When he's healthy, the Bengals don't have a better punt returner.

Mix in Carlos Dunlap, Nick Vigil and George Iloka, and Austin has the talent to make an immediate impact.

Ultimately, it will up to the players whether or not the Bengals will be better on the defensive side of the ball in 2018. They might have been anyway, if Guenther was still around. But Austin is talking the right game. The 'walk' is always the tougher part.

Now, some random thoughts on this random Thursday.

And then, there is this: 50 years ago today, Jimi Hendrix went into the studio and recorded this classic:

Hendrix cut the song in a London studio. According to those who were there, he made it up as he went.

He and bass guitarist Noel Redding and drummer Mitch Mitchell nailed the song in about five hours. it was mixed into its final sound about a month later. In several interviews, Hendrix denied that this song had anything to do with drugs. You can be the judge of that.

Fun fact: Hendrix would later open his own recording studio in New York City. It had several recording areas, including one with a purple mixing board, which remains in use to this day. It, of course, is called the Purple Haze room.

Fun fact number two: For about two years, Hendrix was the lead guitarist for native Cincinnatians the Isley Brothers. Hendrix, then a struggling musician, lived with the Isleys after they had moved to New Jersey. They bought Hendrix a new guitar, a Fender Stratocaster, to replace the beat-up instrument he was playing.

Hendix used it up until the day he died.