Some big factors are working against him 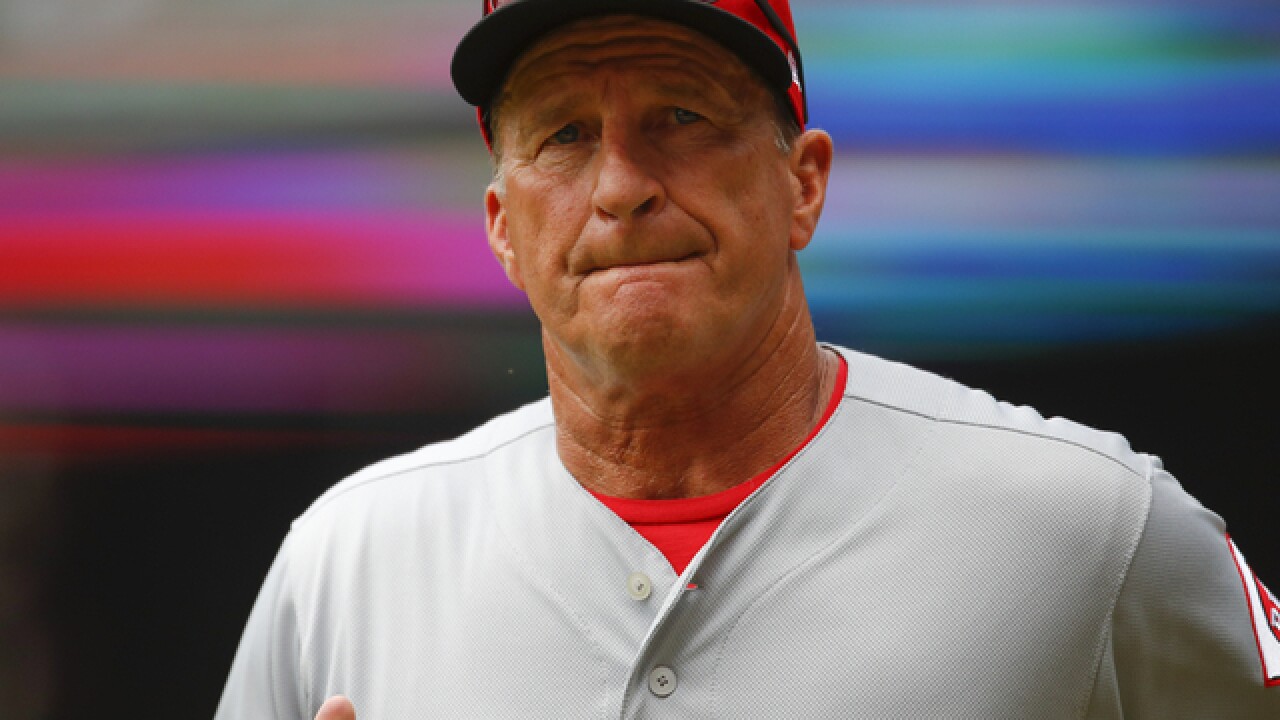 Copyright 2018 Scripps Media, Inc. All rights reserved. This material may not be published, broadcast, rewritten, or redistributed.
Todd Kirkland
<p>Jim Riggleman of the Cincinnati Reds returns to the dugout prior to the start of an MLB game against the Atlanta Braves at SunTrust Park on June 27, 2018, in Atlanta, Georgia. The Cincinnati Reds won the game 6-5. (Photo by Todd Kirkland/Getty Images)</p>

CINCINNATI -- Jim Riggleman wants to manage the Cincinnati Reds beyond 2018, and his boss wants to do a "national search" for the Reds' next manager.

They're both off base.

Only a nitwit would suggest the Reds haven't played better under Riggleman. The hitting is much better, and the handling of pitchers has been more effective than what Riggleman's predecessor could do.

But let's not forget one very important fact: Under Riggleman, the Reds are basically a .500 ball club. Even if they were a .500 ball club under Bryan Price (which 3-15 wasn't) and were .500 overall right now, they would still be nine games back in the loss column to first-place Milwaukee.

The most compelling issue with the Reds and their season so far is the same compelling issue they've had since 2015: They have no top-of-the-pitching rotation "ace." In fact, they have no "two of diamonds" to fill the second top spot in the rotation.

It's hard to bring Riggleman in on that deficiency, so let's just concentrate on whether he is "the guy" for 2019 and beyond.

Most games have three or four moments that determine winning and losing. Pitching changes, double switches, whom to pinch hit, when to start a runner, hit and run, things like that. Riggleman has had his moments. That night in Atlanta a couple of weeks ago when he took the bat out of Scooter Gennett's hands (the National League's leading hitter at the time) and instead had Gennett bunt wasn't particularly the brightest move.

But then there were those decisions to pinch hit with Michael Lorenzen.

More often than not, Riggleman's in-game maneuvers have worked. He's working without any top-of-the-pitching rotation talent. He has been forced to bat his leadoff hitter ninth a lot, and his left fielder hasn't hit since last August.

The Reds are winning games largely because the middle of their lineup is hitting very well and scoring a lot of runs.

Riggleman is also getting solid work out of his bullpen. While Price was saddled with the likes of Kevin Quackenbush and Yovani Gallardo (good grief, who thought that was a good idea?) and, in the past, gasoline cans such as J.J. Hoover, Keven Gregg and Jumbo Diaz, Riggleman is enjoying a healthy Michael Lorenzen, an effective Amir Garrett and two solid bullpen pickups in Jared Hughes and David Hernandez.

A lot of "baseball guys" like Riggleman because he's "old school." The question Dick Williams, the guy running the show at Great American Ball Park, has to ask himself is whether "old school" plays for an entire 162? Or if, the way millennials tune out granddad, will "20-something" players tune out a 65-year-old man when the going gets tough?

Old doesn't mean rusty unless you're not willing to adapt. Will Riggleman? It's going to be a consideration when the decision on 2019 is made.

2. Can he manage personalities?

The easiest way to hide a blemish in business is to win, but when the winning stops -- and it will at some point -- the blemish isn't so hard to find. Major League Baseball teams are no different than any business. They are a collection of all races, creeds, ethnicities and backgrounds, and along with the inherent problems that almost all humans have with getting along, at least one of those things is navigating the rough waters of 25-30 Type A personalities living with each other for six months.

The modern-day player isn't afraid of his manager or front office anymore. A lot of that went away with the advent of free agency.

In the 40 or so years since, times change, child rearing has changed and people have changed. Rightly or wrongly dubbed, "The Entitlement Generation" has raised the modern-day ballplayer.

Along the way, coaches have coddled elite athletes, along with teaching them the skills of the game. I laugh when I hear people say the Reds need a manager like Sparky Anderson. For all of his personality-managing skills, Anderson would find managing a clubhouse today filled with a lot more headaches than he ever had.

Look around the MLB today. Dugouts are filled with young managers. Six managers were new to the game at the start of this season. Alex Cora, Aaron Boone and Mickey Callaway are all running MLB teams this season. The average age of a major league baseball player is under 29.

Does a soon-to-be 66-year-old work in that environment, shepherding a team long term?

Maybe it works. It all hinges on winning. Right or wrong, a manager becomes smarter in the eyes of his players if his team is winning. Look at your own life. If you work for a company that's successful, that has a plan that works, you probably view your boss with more respect and will be more likely to listen to what he says.

Winning is the easiest way to manage egos.

3. Can he manage the front office?

Riggleman comes with baggage. He has managed the San Diego Padres, Chicago Cubs and Seattle Mariners. He also has managed the Washington Nationals, on whom he walked out in the middle of the 2011 season.

The Nationals had just won 11 of their last 12 games, and Riggleman's contract in Washington was up at the end of the season. Before the final game of a homestand that season, Riggleman asked for a meeting with the Nationals' front office to discuss his future.

The front office refused. Riggleman resigned after the game saying, in part, "I'm too old (58) to be disrespected."

Wisely, the Reds gave him a spot in their minor league system the following season. It would seem Riggleman has put his time in Washington behind him, but some things in life you never stop paying for. He could get a new contract here, get the chance to manage beyond 2018.

Still, how much of his history will get in the way as the relationship develops? Forgiving is a lot easier than forgetting.

Riggleman, understandably, will want a say in player procurement and development. How much of a voice will he be given? Will it be a combined effort of front office and Riggleman or strictly a front-office decision when it comes to those matters? Riggleman has been around the block enough to know the top-of-the-rotation deficiencies the Reds have.

He also knows the economics of the game will prevent the Reds from chasing those coveted free-agent pitchers, such as Dallas Keuchel, who will be available at the end of this season. Is Riggleman savvy enough to work with the limitations of dollars and the players given to him?

All of this is what Dick Williams and his smart guys will evaluate in early October. While the best teams in baseball play for MLB's top prize, the Reds will, again, reconvene to the Arizona desert to try to figure out, again, how to make the next season better than the present one.

Williams said this week that he'll take time to survey the field and see what other viable candidates are out there. That's simply being smart. In the end, he may decide that Riggleman is the best choice. That may be smart, too.

In the meantime, Riggleman's audition continues. If possession is really 9/10th of the law, squatter's rights may be the biggest plus the soon-to-be 66-year-old may have.

What should be one of the best rock 'n' roll acts of the summer will roll into Bechtold Park in Sycamore Township on Friday night. On the stage, for free, are two Rock and Roll Hall of Fame members, legends both.

Steve Cropper, lead guitarist in the house band at Stax Records in Memphis all those years ago, will be on the stage. And the famed guitarist from Booker T and the MG's will be joined by fellow R&R Hall of Famer Dave Mason.

Mason first burst onto the music scene with Traffic, then later with Delaney, Bonnie and Friends, Fleetwood Mac and finally as a solo artist. But he played with so many other legends on their projects, most notably Jimi Hendrix and George Harrison.

As the story goes, Hendrix and Mason were at a party and had just heard a bootleg album that Bob Dylan had recorded. When the song "All Along the Watchtower" played, Hendrix was mesmerized. Mason told me Hendrix "grabbed me by the arm and told me we're going to the studio to record this song ... right now." So off the two of them went to Olympic Studios in London, rounding up other musicians. In the overnight hours, Hendrix, with Mason playing the 12-string acoustic guitar solo that begins the song, laid down a cover of the song that not only became a classic but overshadowed Dylan's version.

Mason wrote a song that became a huge hit, for himself and others. The song is "Feelin' Alright," most famously covered by Joe Cocker. That song became the entree for Mason to ask Michael Jackson to sing on Mason's "Save Me."

The two were in the same building, recording albums. Jackson was working on "Thriller" when Mason saw him in the hallway. He asked Jackson if he would be willing to record the high-pitched background vocals.

Jackson looked at Mason for about 10 seconds and then told him that when he was 8, he appeared on a made-for-TV special with Diana Ross. That song, "Feelin' Alright," was the song with which Jackson and Ross chose to end their special.

Jackson, after relating that story to Mason, simply said, "Hang on, I'll be in your studio in a minute." He was. He recorded his part in two takes according to Mason. And so a hit record was born.

You're missing a real chance if you're not at Bechtold Park on Friday night. Thank me later.