Broo View: Here are 9 'hot takes' on everything sports -- Bengals to Reds, XU to UK, FCC to AAC

And, of course, the Bucks and the Hoosiers 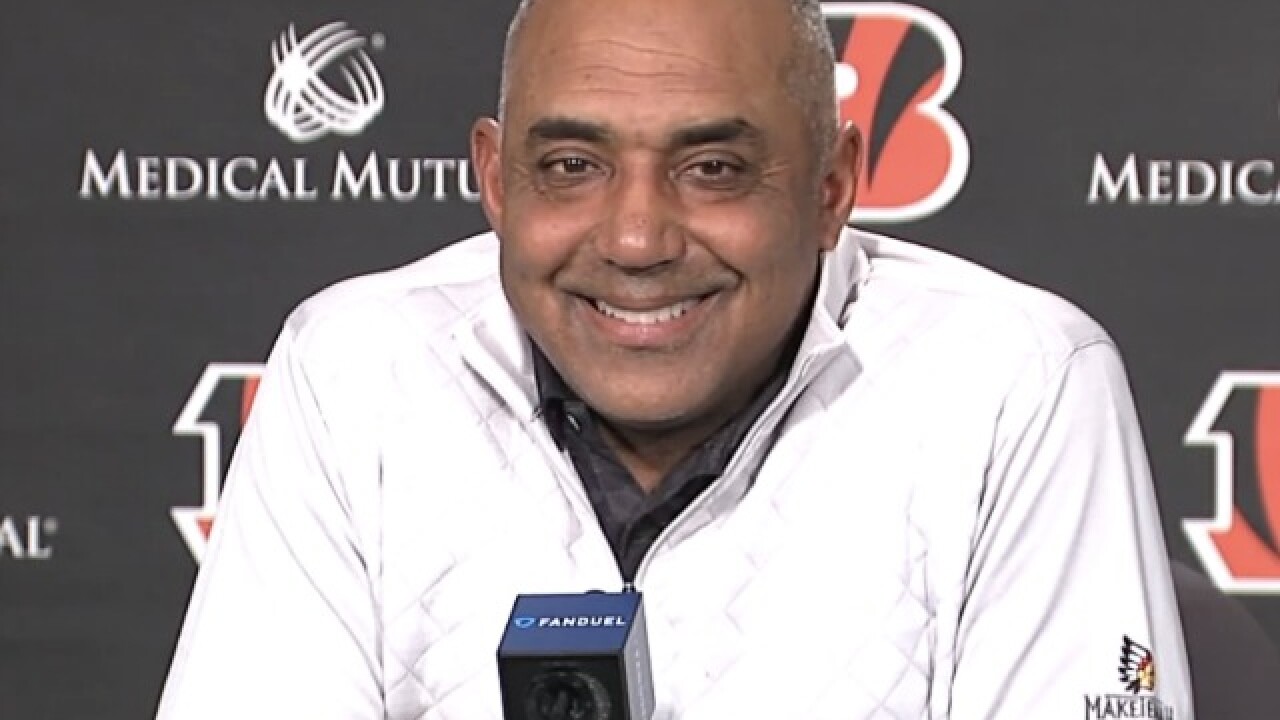 Copyright 2018 Scripps Media, Inc. All rights reserved. This material may not be published, broadcast, rewritten, or redistributed.
WCPO | file
<p>Bengals coach Marvin Lewis is a lock to return in 2019 if this season continues the way it has gone so far.</p>

Everybody is into "hot takes," so here are nine of them. (Glad I don't work for a Channel 37.)

1. The Reds are wasting their time searching for a manager unless they change the way they do business.

There! I went there. Every one of the Reds' managerial candidates has strengths and weaknesses. But unless the Reds are committed to buying some of the major starting free agent pitchers on the market this season, it will make who the manager is moot.

The current Reds roster isn't great. But its "Everyday Eight" is good enough to contend. It simply doesn't have any pitcher who legitimately could be called an "ace" -- someone who can consistently match up against an opposing team's "ace" and be successful.

So, with all due respect to Joe Girardi, Brad Ausmus and the myriad other candidates who've paraded through Cincinnati in the past few weeks, if you don't get a commitment from ownership that it is willing to spend serious money on starting pitchers this season, your fate will be the same as the two managers before you.

2. The Bengals will make the playoffs this season and win at least one game.

I went there, too. What have the first five games of this season taught us? In a league that now requires teams to score 30 or more points to win games, the Bengals are plenty capable of doing that. Andy Dalton and Co. finally have caught up to the NFL in 2018.

Dalton's quick release, an expanded arsenal to throw to even without Tyler Eifert, and a shaky offensive line have given us a team that is averaging just a hair over 30 points a game. And that's better than every other team in the AFC not named Kansas City.

The Bengals' defense is beginning to do what the team's new defensive coordinator promised. The Bengals are taking the ball away and in doing so cutting down on the amount of yardage the Bengals' offense needs to score.

Jacksonville has a very good defense. So does Baltimore. Neither has the offensive capabilities of the Bengals, though. The Chiefs are the most complete team in the AFC, tightening up their defense in the past three weeks.

The season is still young, and the Bengals' "big brothers" are coming to town this weekend. Then, it's off to Kansas City to play the Chiefs in a Sunday night game.

The wheels could come flying off at any moment. After all, this is Cincinnati, where sports hearts are broken on a regular basis. But I'm going with a postseason berth and at least one win. It's the little things in life, right?

3. The University of Cincinnati football team will win 10 games this season ... and not go to a major bowl game.

Plain and simple, it's the team's schedule, largely its conference. The AAC likes to think it's the "sixth major conference," but it's not. UC and the University of Central Florida are off to flying starts. The University of South Florida is very good, too. SMU isn't bad, but that's it. Too many "dogs" populate that bunch. Tulsa, Tulane and East Carolina (which lost to North Carolina A&T) are lousy.

UC had a nice opening-game win on the road against UCLA. Of course, UCLA hasn't won a game yet this season.

But at 10-2, UC will get to a second-tier bowl game. And I think the Bearcats will go someplace nice, too. Sun Bowl, Gator Bowl or, if they beat USF, I wouldn't rule out the Outback Bowl in Tampa.

4. Ohio State will play in the national championship game.

Have you watched this team for any length of time? Dwayne Haskins throws the ball as well as any quarterback in college football. His 25-4 touchdown-to-interception ratio is CRAZY! Parris Campbell, Terry McLauren and K.J. Hill are the best triple threat at wideout I've seen this season.

OSU's run game is punishing. And it's winning without its best defensive player, Nick Bosa, who is still at least a month away from returning from a core-muscle injury.

Georgia, Clemson and Alabama are all very good. Notre Dame has an outside chance to make the final four, though it probably will have to run the table to get there. But I'm going with Ohio State against Georgia in the championship game.

It all will come down to that game against Georgia on Nov. 3. But, remember, that game is in Lexington.

The Wildcats' loss to Texas A&M was painful but not totally unexpected. But look at Kentucky's schedule. Other than Georgia, what game should the 'Cats not win? Vandy is a middling team. Missouri isn't very good, nor is Louisville, and 10-2 is not a pipe dream. A win over Georgia would put the Wildcats at 11-1 and hand them the East title.

Will the Wildcats win the East? Probably not. But they have their best chance to pull it off this season for the first time since the SEC went to divisions.

6. Indiana needs wins over Minnesota and Purdue to become bowl-eligible.

Look at the remaining games for the Hoosiers, beginning with Iowa this weekend. Then, Top 12 teams Penn State and Michigan are on the horizon. Maryland is suddenly revitalized. The Hoosiers started strongly, 3-0. But they've beaten no one. Rutgers, Ball State, Florida International and Virginia? Ah, no.

Can the Hoosiers make it to six wins? Only if they win on the road against Minnesota on Oct. 26 and at home against the Purdue Boilermakers in the season finale, Nov. 24.

7. Chris Mack is gone, but don't sleep on Xavier this season.

Yep, Trevon Bluiett is gone. So are J.P. Macura and Karem Kantner. They were the core of last year's terrific team. But have you watched what the new head coach is doing? Travis Steele has gone transfer crazy. Among that group is San Jose State transfer Ryan Welage, a 6-foot-9 power forward who was SJSU's all-time leader in three-point shots made!

Quentin Goodin is back from last year's team. So, too, is Tyrique Jones. Xavier won't win the Big East Conference regular-season or tournament title. But XU will make the NCAA Tournament with a very good seed. Steele knows offense. Even with losses from 2017-18, this is going to be a very good team.

8. FC Cincinnati will win the USL Championship in its final year.

There are no teams that come close to the personnel that FCC has. The team has been in a unique position since landing an MLS franchise in late May. It has had to start stocking players for the big jump next season. Adding Pa Konate, Fanendo Adi and Fatai Alashe midseason bolstered the offseason signings of Emmanuel Ledesma and Forrest Lasso. The roster is solid, and the resurrection of Danni König's career since his arrival in mid-2017 has been absolute fun to watch.

Playoffs are tricky in any sport. One misstep and you're done for the year. But on the strength of FC Cincinnati's roster alone, there isn't another team in the United Soccer League that compares. Now next year ...

If this season continues the way it has gone so far, Lewis is a lock to return in 2019. He has a contract, and Mike Brown loves him. Lewis has never been loved in Cincinnati, largely because of his playoff record and some of his decisions in game management, like taking timeouts to the locker room with him. I get the frustration that some fans feel. But there isn't any NFL city not named Boston that doesn't have the same questions, concerns and aggravations with its head coach.

I've said this since he has been here: Marvin Lewis knows what he's doing. He was hamstrung early in his tenure here, forced to inherit assistant coaches who should have moved on and dealing with a front office that counted its nickels. The criticism of Lewis' playoff record is fair. But he's hardly incompetent.

Barring the great unknown, which is centered around injuries, there's no reason to believe that if this season continues as it has begun, given the talent on this roster, 2019 should be equally as good. So, I think Lewis continues.

I want to wish a happy 72nd birthday to a man who made '80s fashion totally hip. Daryl Hall, one-half of Hall & Oates, turns 72 today. Full disclosure: I had a few of the getups that Hall is wearing in this video: oversized suits, T-shirt ... way too cool for myself.

Hall met John Oates when both were attending Temple University. They met at a dance, a fight broke out and they both headed for the door. That's when they struck up a conversation about music. Both were in bands. But that night, both made a date to jam with each other. And so was born the second-best-selling duo in pop/rock history.

Their first big hit came in 1973 when "She's Gone" hit No. 7 on the Billboard charts. Then came a string of six straight No. 1 hits. And in 2014, Hall and Oates took their rightful place in the Rock & Roll Hall of Fame.

And on this day, back in 1946 in Pottstown, Pennsylvania, one Daryl Hall came upon this earth.