Broo View: For the Bengals, everything old is new again. This will fix everything! 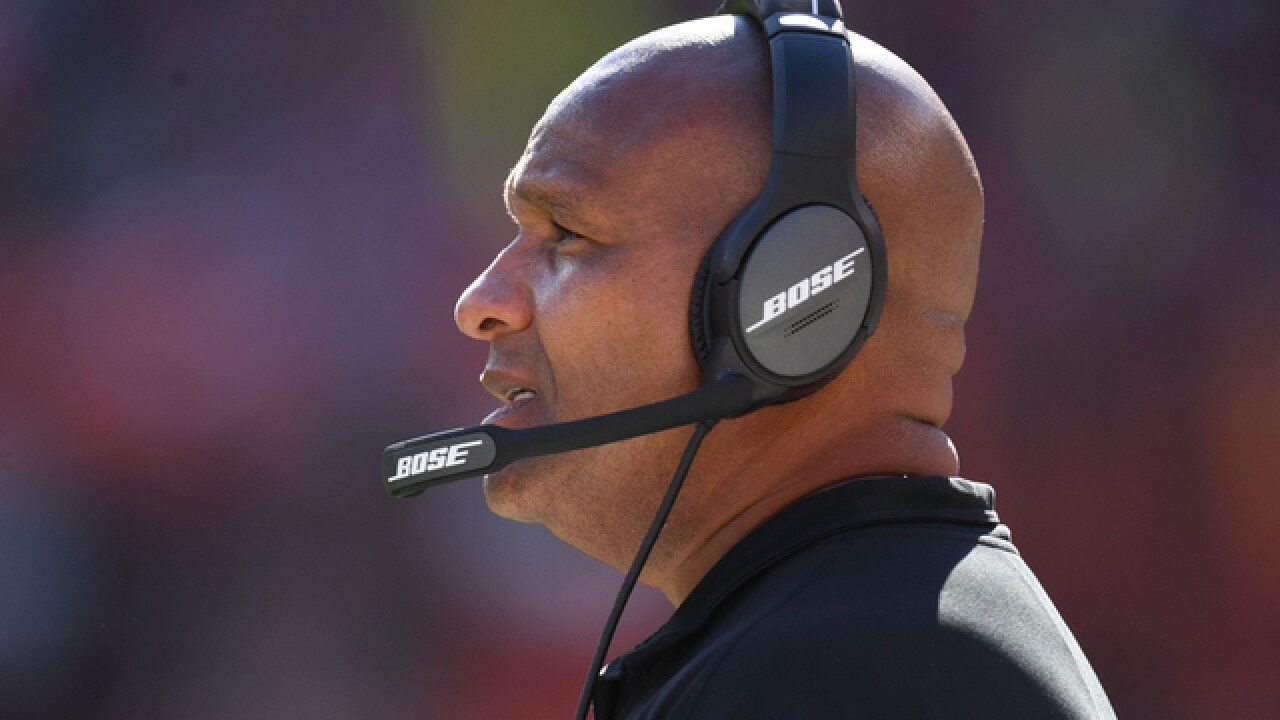 Image copyright 2018 Getty Images. All rights reserved. This material may not be published, broadcast, rewritten, or redistributed.
Jason Miller | Getty Images
<p>Head coach Hue Jackson of the Cleveland Browns reacts to a play in the second half against the Los Angeles Chargers at FirstEnergy Stadium on Oct. 14, 2018, in Cleveland, Ohio.</p>

The Cincinnati Bengals are rounding up the old band! It's Hue 3.0. Why stop there?​​​​

Hue Jackson is back. All it took was to get Teryl Austin's body out the door as quickly as possible. After Marvin Lewis pulled off that magic trick, everything old was new again. This will fix everything.

To refresh your memory, Jackson left the Bengals once and went to the Oakland Raiders. The most dynamic thing he did there was trade for Carson Palmer and send a couple of draft picks back to Cincinnati. When Jackson flamed out there, guess where his soft landing spot was?

But the grass grows under his feet only so much. Three years ago, it was time to shove off again, this time to Cleveland, where the mortality rate for head coaches rivaled only that of an infantryman out of ammo. Mix in the usual front office stupidity that has plagued that franchise since 2000, and Jackson was on his way back.

All he had to do was make sure he got those gas receipts in order from the drive down I-71. Hue Jackson -- if you liked him then, imagine how you'll like him now.

Nobody embraces nostalgia like the Bengals, except when it comes to, you know, retiring jersey numbers.

Allegedly, Jackson will have Lewis' back. Because according to Lewis, his back was turned to the playing field a lot this past Sunday while trying to attend to his collapsing defense.

If you haven't heard, the Bengals' defense has been historically bad this season -- they are now the proud owners of the most yards allowed in three consecutive games in NFL history. In the wake of that, Austin was summoned by the death tribunal Monday morning.

For Austin it was a short, not-so-sweet rollercoaster ride here in Cincinnati. Once a hot candidate for an NFL head coaching opportunity, Austin barely had time to unpack. Now he's packing up again.

With Austin out of the way, it cleared the way for Hue 3.0. He'll apparently be a "big picture" guy, watching the offense while Lewis attends to the defense. In Bengal-dom, the fun is back in dysfunction. But why stop with Jackson? The Bengals should go all in on this nostalgia.

Paul Alexander is on the market. He spent half a lifetime here, coaching a few top-notch offensive linemen and a lot of stiffs. He lasted less time in Dallas than Austin lasted here. Bring him back. Bob Bratkowski? He has got to be somewhere, available and still unsure of how to use a tight end in his offense. Grab him. Leslie Frazier? He could share a condo with Jackson. And why stop with coaches?

"T.O." would be fabulous in Bengal stripes again. Sam Adams? Let the buffets beware. Peter Warwick, Gus Frerotte, Jon Kitna and Andre Smith? When in doubt, wheel 'em out. Let's go all in on this thing.

Except don't retire jersey numbers, you know, like Anthony Munoz, Boomer Esiason, Cris Collinsworth, those guys. And, God forbid, no "ring of honor." Save that for the new stadium in 2026.

The NFL is a league totally different than the one Jackson saw when he was last in Cincinnati. He left here twice and made bad career choices. Going to Oakland as the head coach produced nothing except a trade that allowed the Bengals to fleece the Raiders. Palmer for a couple of draft picks, including a first-rounder? Brilliant. Going to Cleveland as a head coach was even better. Coaching the Browns is the moral equivalent of farming in the Soviet Union. Mix in a front office that was more qualified to find a designated hitter than it was an offensive line and you have what did Jackson in. Did he not know how that story would end BEFORE taking that job?

Lewis said he made his second coordinator change in two seasons because he didn't like what he saw from his defense while on the bench. Like on the field was better? And now, he's not just the head coach, he's also the defensive coordinator. So who is watching the store when Andy Dalton is on the field? Is it Jackson? Or is it Bill Lazor?

By the way, how does Lazor get a free pass for the way the season is spiraling out of control? Have you seen that bunch lately? The New Orleans Saints rolled in here with the next-to-worst pass defense in the NFL this season. And the Bengals managed just seven points with Dalton in the game. While the Saints' offense was carving up the Bengals' defense with two running backs, Lazor couldn't figure out how to get both Gio Bernard and Joe Mixon on the field at the same time.

Riddle me this, Batman: Who would you have rather seen on the field with Mixon: Bernard or Auden Tate? The now-seemingly-mythical Auden Tate. Mixon was supposed to make us forget about the injured A.J. Green for 60 minutes this past Sunday. Yet in the final 5:38 of the first half, with the game still in play, Mixon was standing on the sidelines watching -- WATCHING! -- while the Bengals' offense was wheezing its way to halftime. Wheezing after Mixon carved up the Saints' defense on his way to a first-possession touchdown.

But I digress. And so did Lewis this week, when he took half of his attention as a head coach away from the playing field in anointing himself defensive coordinator. Maybe it works. It better.

The NFL, particularly the AFC, is awash in mediocrity again in 2018. There are no great defenses. You win by outscoring the other guy. The Kansas City Chiefs do that. Their defense is a sieve. But so far, Tyreek Hill and Kareem Hunt have sprinted around the field on game days. The Pittsburgh Steelers' defense is a weekly fire drill. But the Pittsburghers still have Antonio Brown and "Robocop" at quarterback. No Le'Veon Bell, no problem. The New England Patriots aren't your father's Pats. The Los Angeles Chargers are 7-2, but the only team they've beaten with a winning record is the Tennessee Titans. The Bengals are 5-4 and alive and well for a playoff berth in that mess.

Look who's left on the schedule. The Browns twice, the Denver Broncos, Oakland Raiders, Chargers, Baltimore Ravens and Steelers. The Browns stink. The Raiders and Broncos combined wouldn't deliver a winning record. The Chargers in L.A. and the Steelers in Pittsburgh will be tough "outs." The Ravens? Lame duck coach and a lame quarterback (Joe Flacco allegedly has a hip injury) is what's waiting on the Bengals this Sunday.

A 9-7 record is still out there. And 9-7 probably gets you in the playoffs.

That, in so many words, are your 2018 Cincinnati Bengals nine games in, with seven games to go. Nostalgia in play and Hue 3.0. Things are looking up, so long as Jackson kept those gas receipts for Mike Brown to approve.

This was the No. 1 song in the USA 44 years ago today, and it was the first No. 1 song in John Lennon's solo career. This is some amazing footage shot around New York City with Lennon in 1974 to promote his hit record.

Lennon was a notorious night owl. And, invariably, when watching television throughout the night in his New York City apartment, he stumbled upon a New York City TV preacher by the name of Reverend Ike. One night during Ike's telecast, while seeking money from his audience, he said, "It doesn't matter what it is. It's whatever gets you through the night." Lennon wrote down that line, and then he wrote an entire song around it. It was the lead "cut" on his 1974 album "Walls and Bridges."

By the way, that's the legendary Bobby Keys on the sax. Keys would go on to great fame with the Rolling Stones. That's him on "Brown Sugar," too. Classic John Lennon in both film and song here. He would have turned 78 this past October.