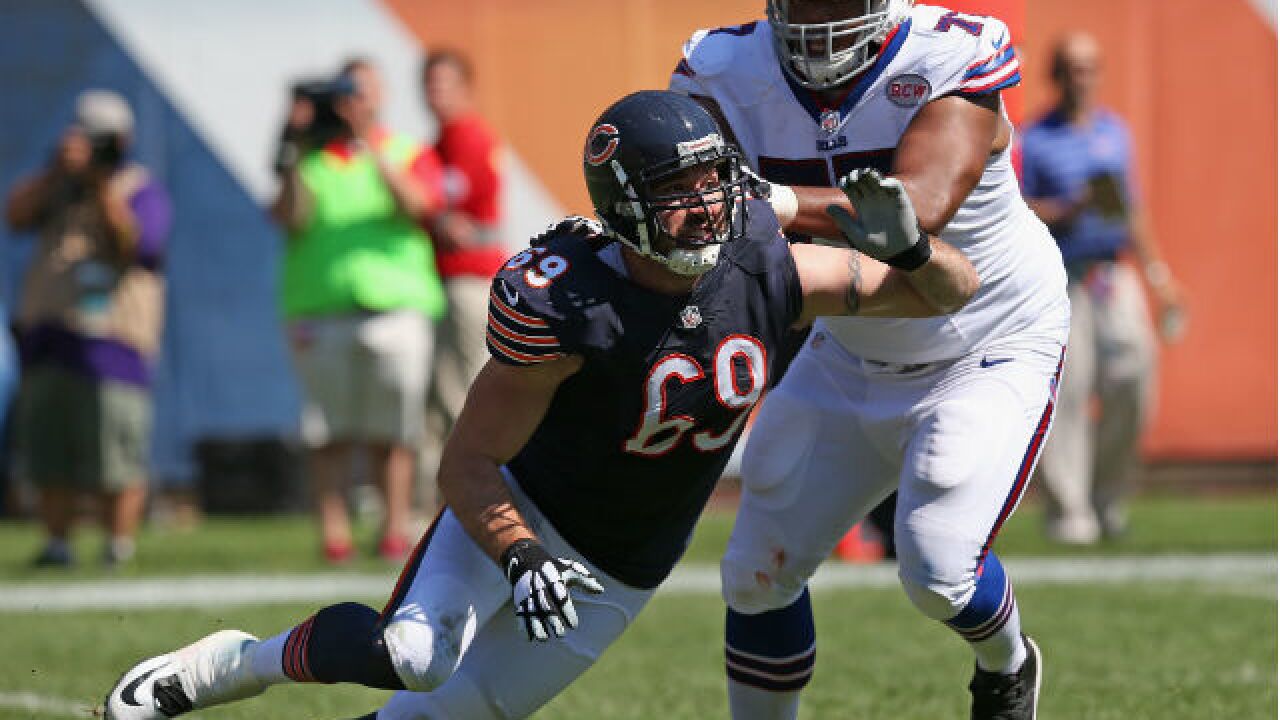 Image copyright 2018 Getty Images. All rights reserved. This material may not be published, broadcast, rewritten, or redistributed.
<p>CHICAGO, IL - SEPTEMBER 07: Cordy Glenn #77 of the Buffalo Bills blocks Jared Allen #69 of the Chicago Bears is at Soldier Field on September 7, 2014 in Chicago, Illinois. The Bills defeated the Bears 23-20 in overtime. (Photo by Jonathan Daniel/Getty Images)</p>

The Bengals have begun free agency in their typically untypical fash. Only this time it's different...

After a year without Andrew Whitworth, the Bengals have realized their mistake. The first road in healing is to admit you made a mistake. And the Bengals made a huge mistake in letting Whitworth walk after last year. We could rehash the whole process. Been there, done that. At least they know now what they did in the wake of Whitworth didn't work.

The Bengals don't get too crazy around draft time. They did it once, trading up the night before draft day in 1995 from the fifth spot overall to the number one spot. They used that pick to take Ki-Jana Carter. It sent shock waves through the NFL. But Mike Brown was trying to get Hamilton County to build him a new stadium and needed some buzz. Nice idea. But Carter was more sizzle than steak. Blowing his knee out on the third play of his first pre-season game didn't help either.

And they've rarely been outside the box during free agency. There was that four-year, $28 million mistake with wide receiver Antonio Bryant back in 2010. He lasted one practice, hurt his knee and was never heard from again. Bryant wound up pocketing $8 million for that effort. Then along came Terrell Owens. And who could forget the afternoon that Barry Foster decided to become a Cincinnati Bengal? That was in 1995, when the 1992 NFL rushing champ signed a one-year deal with the Bengals, mid-season for $1 million, then showed up the next morning for work and handed the check back to Mike Brown. Buyer's remorse deluxe.

So after all of that history comes Cordy Glenn. The Bengals swapped first-round draft picks with the Buffalo Bills to get Glenn. The Bills and Bengals also swapped picks later in the draft. The Bengals take on Glenn's hefty contract. But he's under contract for the next two seasons. He's had foot injury issues. So either the Bengals' team doctors think they're not that big a deal, or the Bills know something the Bengals don't. We'll all know by the fall. But we already knew that Cedric Ogbuehi wasn't cutting it and right tackle was unsettled, too. We also know that this upcoming NFL draft isn't stocked with stellar offensive tackles. So the Bengals got aggressive.

It's about as sexy as the Bengals ever get come draft time. And since they play free agency like it's some sort of death game, this is as good as it's going to get. The Bengals never give you drama. Comedy, yes, often. But come free agency, it's more like a mildly amusing sitcom.

Now, to some random thoughts on this random Thursday...

UC and Xavier will win their opening-round NCAA Tournament games. I hear a lot of angst-ing from both fan bases. Upsets here aren't happening. I think if UC is matched up in round two with Nevada, that could be a problem. Nevada is coached by Eric Musselman, the son of a former NBA head coach. Musselman has taken his team on a rat ride this season, largely on the back of transfers. Caleb and Cody Martin transferred in from North Carolina State. Jordan Caroline arrived from Southern Illinois, Kendall Stephens from Purdue and Hallice Cook from Oregon State. Nevada will be a problem.

Same for Xavier. I hear a lot about their round of 32 potential match-up and Missouri. The Tigers are getting freshman forward Michael Porter Jr. back for these games. He's been out four months, recovering from back surgery. I'm sure he's healthy. I know he has the potential to be a terrific college player. The Tigers are an eight seed and playing Florida State in their NCAA Tournament opener. I think they'll win that game. But Missouri has neither the speed nor the ability to score as well as Xavier. I have Xavier making it past both opening round games.

The Reds lost 20 percent of their starting rotation last weekend. Anthony Desclafani has yet another oblique strain. Brandon Finnegan left his last start after getting one batter out with a biceps strain. Desclafani knows he'll be gone for a while. This is the same injury that forced him to miss half of the 2016 season. He missed all of last year with an elbow ligament problem. Finnegan thinks he'll be sidelined only a short time. But with Opening Day now two weeks away, even a short time away means he doesn't answer the bell for the start of the 2018 season.

Once you get by Joey Votto, there's just so little "buzz" about this team... yet again.

I can't blame the Cincinnati Public Schools board for wanting as much tax money as it can get from FC Cincinnati. It's the American Way. But I don't want to hear any complaints when FCC takes its stadium to Oakley or Newport (and Newport is looking a lot better today than it was a week ago). Something (as in money) is a helluva lot better than nothing (as in money). It very short sighted. But it's their call and, politics on the board aside (and there is a lot of politics with that group, stay tuned), they'll live with the fallout.

Meantime, as I outlined last week in this column, the West End idea for FC Cincinnati was much more about land development around the stadium rather than the stadium per se. I think it might be time for a reality check. The whole idea in the first place was to buy some land, build a stadium and get an MLS team. Razing and building a high school football stadium and getting into the home building business seemed strange. Unless you consider the land development that would occur around it.

Many, many FC Cincinnati fans tell me the Ovation site in Newport would be a non-starter for them. The team has hard research that says the same. I'm not buying it. If you truly want a franchise in MLS, you'll go within a reasonable distance to support it. If you won't, you really weren't a fan in the first place...

From their 1964 album, Shut Down Volume 2, the song was written by Brian Wilson and Mike Love. Love was a guest on my radio show a few years back. He told me he got a lot of the inspiration for his songwriting, at least early in his career, from the syncopation that came from the music of Chuck Berry. In fact, the opening guitar riff was a homage to Berry's "Johnny B. Goode."

They cut the song in Los Angeles, with some of the musicians that worked for the legendary studio band, The Wrecking Crew. Love was the principal lyricist on a lot of the Beach Boys hits. "California Girls," "Good Vibrations" and "Kokomo" would be just three of them. And Love was among the first musicians to embrace Transcendental Meditation, studying in India with the Maharishi Mahesh Yogi at the same time the Beatles were there.

Love has amazing stage energy to this day, as the Beach Boys (only him now with supporting musicians. He legally obtained the name "Beach Boys" years ago) tour up to seven months every year.