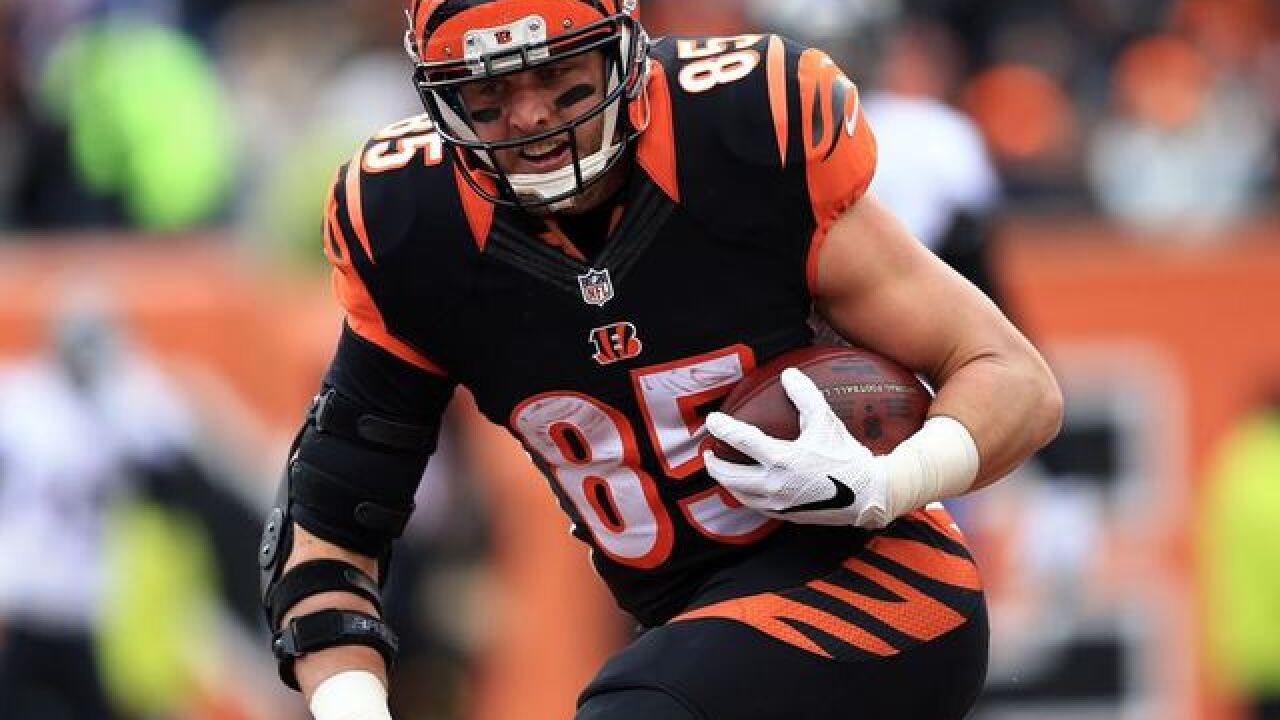 Copyright 2017 Scripps Media, Inc. All rights reserved. This material may not be published, broadcast, rewritten, or redistributed.
<p>Bengals tight end Tyler Eifert has been the team's only high-impact first round draft pick since 2013, WCPO's Ken Broo writes. The Bengals must select a high-impact player in the first round of tonight's NFL Draft and reverse a trend that has hampered the team. (WCPO file)</p>

CINCINNATI -- It doesn't matter whom the Bengals draft in the first round.

The most important thing is this: He has to play and play effectively starting in September. Nothing else matters.

The position he plays doesn't matter, really. You win with your best players.

And you usually get your best players in the first round of any draft. Lately, the Bengals aren't doing so hot with that. And lately, they've been losing a lot of games.

It's great to do well in the later rounds of an NFL draft. The Bengals have found some bargains. Geno Atkins would come to mind. T.J. Housmanzadeh was another late draft bargain.

But by and large, if you don't win at the top of a draft, it's hard to win games. Whomever you take in Round One has to play immediately. The NFL and its rookie salary structure demands it.

By collective bargaining agreement with the NFL Players Association, first-round-drafted rookies get contracts no longer than four years. The team holds a fifth-year extension, if it chooses to do so. Bonus money is predicated largely on where a player is drafted. Yearly salaries in the four years of a player's rookie contract won't break any NFL team's bank.

But after that initial four-year contract, things start to get expensive for NFL front offices. If a drafted rookie has completed four or more years of service to his team (unless the team declines to pick up that fifth-year option for its first-round pick), he can then become an unrestricted free agent.

On the open market, anyone with a modicum of talent is going to make a lot of money. Immediate impact is what every NFL team needs to look for in a first-round draft pick in the new age of professional football. And the Bengals have struggled with that.

The Bengals drafted wide receiver John Ross at No. 9 in the 2017 draft. His season turned out to be a giant whiff. He arrived here hurt, got hurt and along the way managed to fumble, run a wrong route at a key moment and got hurt again. He also seemed to make his head coach mad a lot.

A year before Ross, the Bengals took cornerback William Jackson III with their first-round pick. He seemed to be a default selection, after the Bengals were outmaneuvered on draft day in their quest for a wide receiver (why Ross happened last year). Jackson had a really nice second season. He was one of the few corners who could actually defend the Steelers' Antonio Brown. But he missed his entire rookie season after getting hurt in training camp.

Prior to that, the 2015 draft was painful. Cedric Ogbuehi was the pick. He's shaping up to be one of the all-time first-round "whiffs." Intent on replacing Andrew Whitworth at left tackle (and what a solid idea that was), the Bengals drafted Ogbuehi just four months after major knee surgery. They didn't expect much from him in his rookie year. They still had Whitworth. They didn't get much from Ogbuehi his rookie year, nor any year since. He has been benched, moved to right tackle and, with the arrival of Cordy Glenn from Buffalo, appears to be heading to the bench again.

When Darqueze Dennard was taken in the first round of the 2014 draft, we were told that he was the most aggressive cornerback in the entire draft, someone who could play "nose to nose" with a wide receiver.

Maybe he'll do that someday.

Gaining traction has been hard for Dennard. He had no starts as a rookie, just 12 in his time here. The 2017 season was by far his best campaign, with 85 tackles and a couple of interceptions.

Dre Kirkpatrick arrived in 2012 with a lot of hype from his time at Alabama. He also arrived hurt and played just five games as a rookie. He really didn't become a full-fledged starter until 2015. He's good now. But he started a disturbing trend of first-round picks contributing little in their rookie seasons.

In the last five drafts, only Tyler Eifert – the team’s 2013 first-round pick – has had an immediate impact. He caught a couple of touchdown passes his rookie season and earned 445 receiving yards. He became Andy Dalton's "comfort blanket."

But Eifert hasn't been able to stay on the field. Because of injuries, Eifert has played in less than half of the regular-season games he has been eligible to play.

Desperate for offensive line help a year ago, the Bengals instead took a wide receiver, Ross. They passed on left tackles Garrett Boles, who went to the Denver Broncos, and Cam Robinson, now with the Jacksonville Jaguars. Both started for their teams last season, with Boles named to the Professional Football Writers of America "All Rookie Team."

Winning football teams are assembled in a lot of different ways. Most rosters will have some big-dollar free agents. Most also will have some mid-to-late-round "bargains" that the talking heads will drool over during the draft.

Almost all have first-round draft picks who proved they were worth the investment. The Bengals have several of those.

But in the current NFL world, you have to have players who make an impact immediately because the clock is ticking.

Now to some random thoughts on this random Thursday: