Broo View: Bengals aren't as bad as they look, but Reds hiring Bell isn't as good as it looks 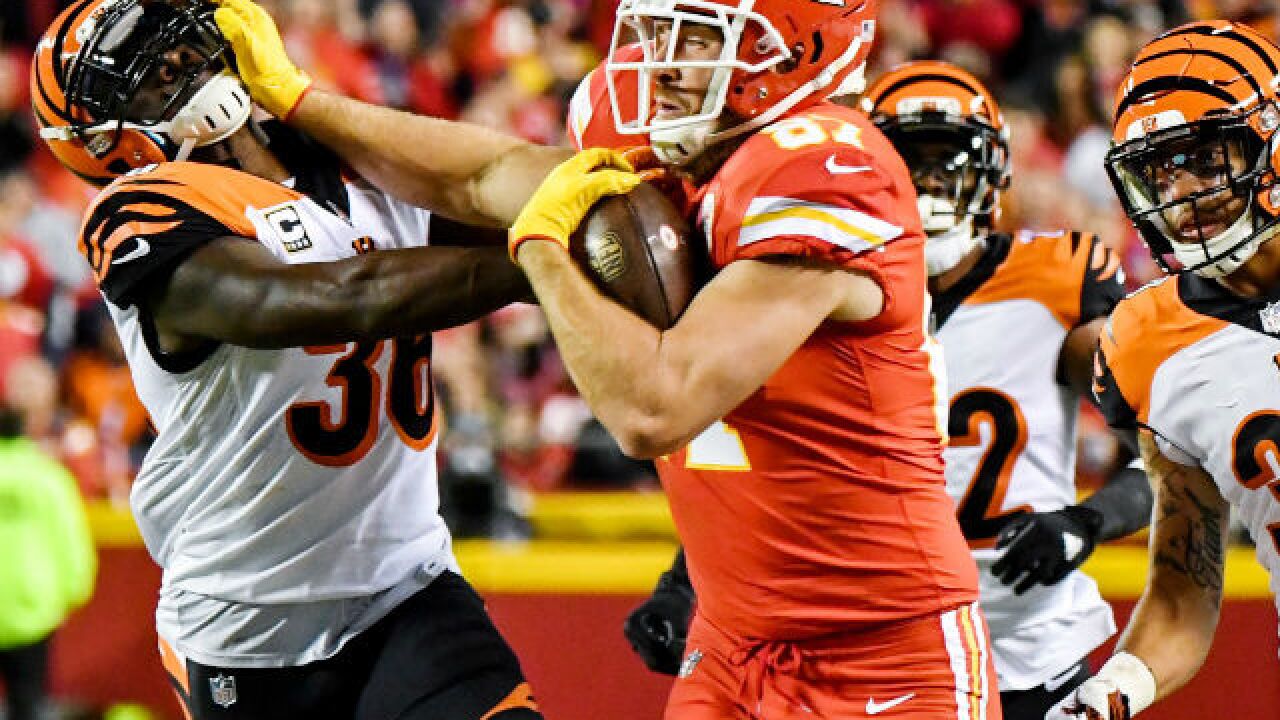 Image copyright 2018 Getty Images. All rights reserved. This material may not be published, broadcast, rewritten, or redistributed.
Peter Aiken | Getty Images
<p>Travis Kelce of the Kansas City Chiefs stiff-arms Shawn Williams of the Cincinnati Bengals along the sideline during the first quarter of the game at Arrowhead Stadium on Oct. 21, 2018 in Kansas City, Kansas. </p>

The Cincinnati Bengals aren't as bad as they looked  against the Kansas City Chiefs, and the Reds naming David Bell manager isn't as good as it looks.

But I could be wrong.

The Bengals are 4-3, and they probably will be 5-3 by sundown Sunday. The Tampa Bay Buccaneers aren't good.

Bell has an impressive resume, particularly his time in St. Louis as Mike Matheny's right-hand man. But he will be good here only if the Reds' front office gives him a chance to win. And that will be a severe departure from the way that group has operated since 2010. I'll get to that in a moment.

The Bengals got throttled Sunday night in Kansas City. They couldn't figure out quarterback Patrick Mahomes, couldn't block and couldn't tackle. And worse, the Bengals put just 10 points on the board against a defense that was on the road to historically being one of the worst in NFL history.

The fact is the Bengals are three plays away from being 2-5 rather than 4-3. Clay Fejedelem, he of the botched fake punt, pulled off a strip-and-take for a touchdown in order for the Bengals to beat the Indianapolis Colts in the season opener. The Bengals also needed two defensive scores to beat the Miami Dolphins just a few weeks ago.

So far this season, I don't think the Bengals are as bad as some "experts" predicted this past summer. But they're not currently one of the top-tier teams in the AFC.

The Bengals have a tough time blocking opponents' offense. They don't run the ball enough. Joe Mixon is often an afterthought, and the Bengals have no real threat at tight end with Tyler Eifert out for another season. And their $100 million defensive line played like a line worth about $100 against the Chiefs.

The Buccaneers were good for a hot minute or two this season. But then Fitzy fell back down to earth. (God bless Ryan Fitzpatrick. He has made a ton of money for being just intriguing enough to give you hope.) And now the Bucs have Jameis Winston under center. Or in the shotgun, or anywhere on the field. Winston anywhere on the field for the Bucs is bad news for Tampa fans. But I digress.

After the Bucs, then there's the bye week. And then Cincinnati will play New Orleans at home -- not good. After that, the Bengals will face Baltimore in Maryland. That's not good either. The Bengals caught the Ravens flat-footed last month, but since then the Ravens' defense has conjured memories of their 2000 Super Bowl championship team. And that team won with a quarterback a lot less talented than Joe Flacco.

But after that are winnable games against the Cleveland Browns (twice), Denver Broncos and Oakland Raiders. That would be nine wins. Would nine wins get the Bengals into the playoffs?

The AFC West looks like a two-playoff-team division. Right now, there are six teams with 4-3 and 3-4 records. And the Bengals hold tiebreakers against two of them: the Ravens and the Dolphins. So who knows?

Fundamentally, just about every team in the NFL has flaws. Pete Rozelle's great equalizer approach 40 years ago continues to bear fruit. The Bengals' flaws are their inability to get off the field on third down, no tight end and a pedestrian approach to pass defense.

So the Bengals are average again. The NFL is notorious for having five teams who are great and five that stink. The rest of the league, including the Bengals, could finish anywhere from 6-10 to 10-6. Same way every year.

The other big news of the week is that the Reds have hired David Bell as their next manager. His lineage (father Buddy, grandfather Gus) is important, but it has been vastly overplayed. In and of himself, David Bell is a good hire. Yeah, it's his first major-league managerial job. Sparky Anderson did it all those years ago. Aaron Boone did it this season. But Bell brings a lot more to the table than either Anderson or Boone did.

Bell managed in the Reds' minor-league system. In addition to being the bench coach in St. Louis for four years, he ran the San Francisco Giants' minor-league system last season. He also was a coach with the Chicago Cubs. He should have gotten his shot at managing a long time ago.

At 46, Bell is older but not ancient. And Major League Baseball teams are moving in that direction. Most MLB general managers want field managers who are an extension of themselves. A major-league manager today must embrace two things: the direction, sometimes on a daily basis, laid out by the general manager, and a complete acceptance of analytics. Want to know why Dusty Baker won't manage again? He's "old school," and "old school" isn't selling anymore.

I hear fans say, "We need someone who'll get up in the players' faces, like Lou Piniella did." It's why Piniella hasn't managed in a long time: That management style simply doesn't work anymore.

The generation that's playing professional sports today is far different from the generation that played it during Piniella's time or during Anderson's heyday. It's all about how kids were raised and, in the case of talented athletes, how they were coddled along the way. Make no mistake about it: Any elite athlete under the age of 25 has been enabled, coddled and spoiled. Mix in social media, which has changed parenting enormously in the last 10 years, and you have a "get in their face" mentality that simply doesn't work anymore.

This isn't some crabby old man talking. It's reality.

Bell's mission, and we'll know soon if he can do this, is to hold his ballplayers accountable. Too many managers with too many teams don't like doing that. A major-league manager told me once that holding a player accountable would breed clubhouse discontent. He didn't last long in his job, because he was dead wrong.

I'm sure Bell knows all about this. He has been around the player development game for most of the last 10 years. He also knows this: Unless the Reds get better starting pitching for him, he doesn't stand a chance.

A good manager may get you five to seven more wins a season than an average manager will. So that would make the Reds, what, a 90-loss team next season?

As I've written and said before, the Reds need to sign at least two high-end, top-of-the-rotation starting pitchers before next spring. They need two "hammers" -- and they may need more than that.

With injuries, teams need depth in their starting pitching. Any team needs at least five quality starters and a couple of more decent starting pitchers if it wants to contend. Who on the Reds' starting rotation from the last five years would you consider a "top of the rotation" guy? Luis Castillo shows promise. Tyler Mahle, maybe. But the rest are a collection of three, four and five starters. You can get away with Anthony DeSclafani in a third or fourth slot. But that's not going to cut it.

I've floated two free agents the Reds should chase hard this winter. One is the Arizona Diamondbacks' Patrick Corbin. The other is the Los Angeles Dodgers' Hyun-Jin Ryu. Both are left-handed and both made under $8 million this season. A lot of teams will chase both with free agent dollars. But wouldn't it be refreshing if the Reds actually did something aggressive and bold to take other teams out of the running?

Bob Castellini said this week that his team "will" get better starting pitching before next season. He needs to pony up. His new manager deserves it. Most important, his fan base deserves it. The Reds played to too many empty seats in 2018. They had their lowest home attendance in the last 34 years. There are only so many fireworks you can shoot off and so many bobbleheads you can hand out.

What their new manager deserves is a team that is as equally entertaining.

Moving on to some things that have been bouncing around my head like a ping-pong ball ...

The album "Slippery When Wet" went to No. 1 on the U.S. album charts 32 years ago today, fueled in no small way by this.

"You Give Love A Bad Name" and "Wanted Dead Or Alive" were the two other big hits off this album. It spent eight weeks at No. 1 and catapulted Bon Jovi to international stardom.

The real genius behind the album was importing legendary songwriter Desmond Child to collaborate. Far from his Florida home, he joined the band for the recording sessions in Canada in the dead of winter 1986. Child co-wrote this song and "You Give Love A Bad Name." The album went 12 times platinum and remains one of the top 100 best-selling albums in U.S. history. Bon Jovi has released 13 studio albums and sold more than 100 million records worldwide. And this past spring, Bon Jovi was inducted into the Rock & Roll Hall of Fame.