'I love my life as is': An NKY motivational speaker severely injured in 1999 is given new hope 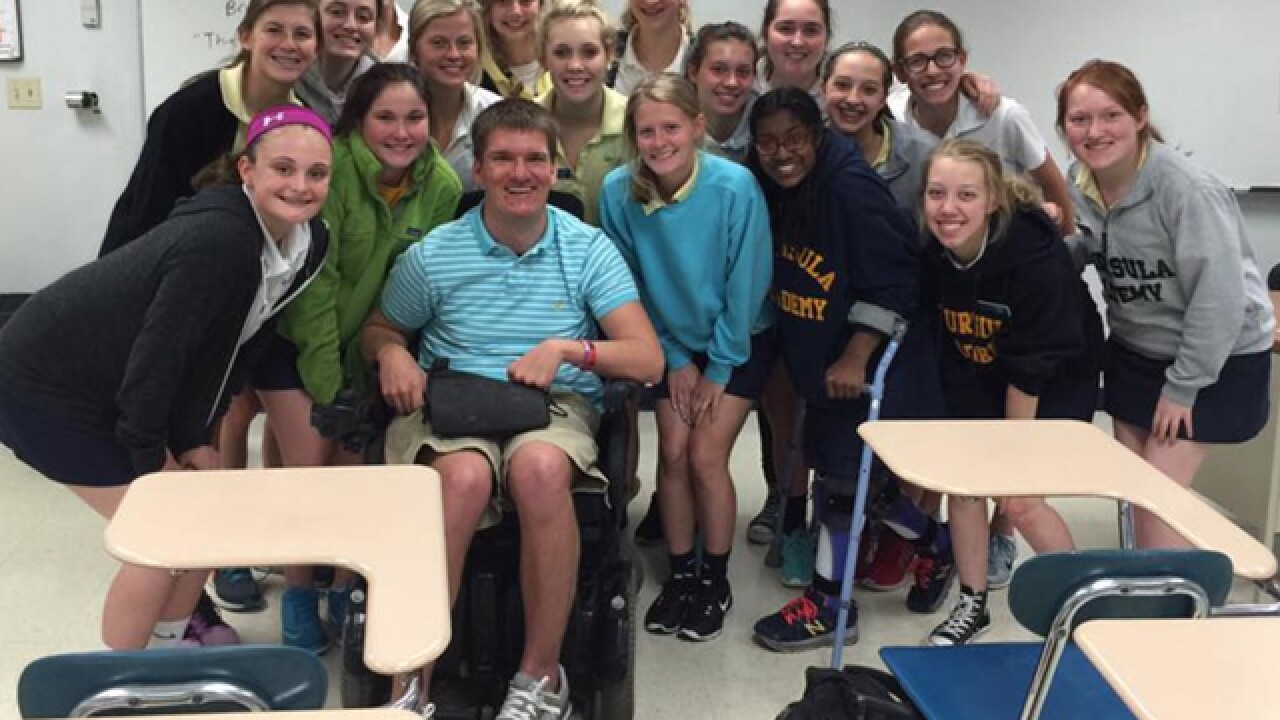 Copyright 2018 Scripps Media, Inc. All rights reserved. This material may not be published, broadcast, rewritten, or redistributed.
Contributed
Brad Fritz at St. Ursula Academy after a talk.

Update: Brad wrote on his Facebook page Nov. 21 that he was disqualified from the stem cell trial, but he hopes to find another way to get the treatment.

CRESTVIEW HILLS, Ky. -- In the end, if Brad Fritz gets his wish, stem cell treatments will allow him to walk again. And think clearly again.

His life will be changed. Again.

Fritz knows that the chances of him making a complete recovery may be remote considering all he's been through. Then again, the chances may be better than anyone knows.

No matter what, he says, there's a chance.

"This is all still so unbelievable and now it's almost here … it still doesn't seem real," says the 33-year-old Fritz, who lives in Crestview Hills, Kentucky.

Fritz is one of a dozen people across the country who have been chosen for an experimental stem cell treatment in Columbus, one that could help regrow parts of his damaged brain.

"He will go to Columbus for a physical and updated MRI, then he will be examined by both physical and occupational therapists," his mother, Peggy Fritz, said. "I just don't want him to get too excited."

'So angry and confused'

Eighteen years ago, Brad was an all-star high school football player at Covington Catholic High. One night, after a painful loss, he got into a car with some friends who'd been drinking.

Three months later, he woke up in the hospital. He'd been in a coma.

The police report said the three teenagers were driving in a cemetery, going about 55 miles per hour around a curve when they clipped a headstone, spun around twice and hit a tree. Brad, who'd been wearing his seatbelt, was still thrown from the car.

"When the paramedics arrived, I had a collapsed lung, a broken jaw and they said my head had swollen to the size of a basketball," he said.

Doctors had little hope he would survive, and when he finally woke up after three months, his brain was so damaged he could barely use his arms, legs or hands.

"I was so angry and confused that I didn't even want to be alive," he said.

But Fritz's life was about to change again.

Five months later he left the hospital, but he still could not stand on his own. Rehabilitation was difficult, as was high school. Fritz wondered what it would be like if he weren't alive at all.

Then he went on a religious event called Christian Awakening, where he heard other survival stories. Fritz said he realized he was blaming God for his accident when he should have been thanking God for saving him.

"I felt selfish that I thought my story was any more difficult than anyone else's," he said. "It brought back my faith in God because I realized that I hurt myself, and God kept me alive."

Fritz went on to graduate high school, then earn a communications degree from Thomas More College. He now works as a motivational speaker, sharing his story with schools across the Tri-State. He uses a wheelchair and speaks with the aid of a machine called a Lightwriter, which speaks words that he types.

"His story of recovery, of faith and of what a difference his nurses made make it so appropriate for this class," Barbara Harland, who has taught in Xavier University's School of Nursing since 2005, said.

Fritz has presented to places as far away as Rhode Island. His goal is to help as many people as he can.

"If I could help just one person, then I'm doing my job," he said.

But earlier this year, another change came into his life. A family member saw an advertisement for a specific kind of stem cell treatment.

"My aunt and my mom kept bugging me, so I finally applied just to get them off my back," Fritz said. "I received an email saying that they were considering me, so I started doing more research into the study and saw that they're hoping that the treatment can grow back brain cells and that it's working in rats."

That would mean the treatment could help regenerate missing parts of his brain.

"They'd drill into my skull and insert stem cells from blood plasma into my skull with hopes that they would regenerate the parts of the brain that I'm missing, and they'd take over and just join my brain as if they were my own," Fritz explained. "Hopefully making me walk, talk, cure my memory problems, and just make me think clearly again."

There's always the chance he could be in the placebo group, but Fritz said he's ready to roll the dice.

"I'm very hopeful and optimistic, but I love my life as is so I won't be heartbroken if I don't get it or if it doesn't work," Fritz said. "This won't make me or break me."

Want to contact Brad Fritz? Get him at brad@thebradfritz.com or visit him online.