So popular it had to be shut down to preserve it, Boone Cliffs is almost ready for its comeback 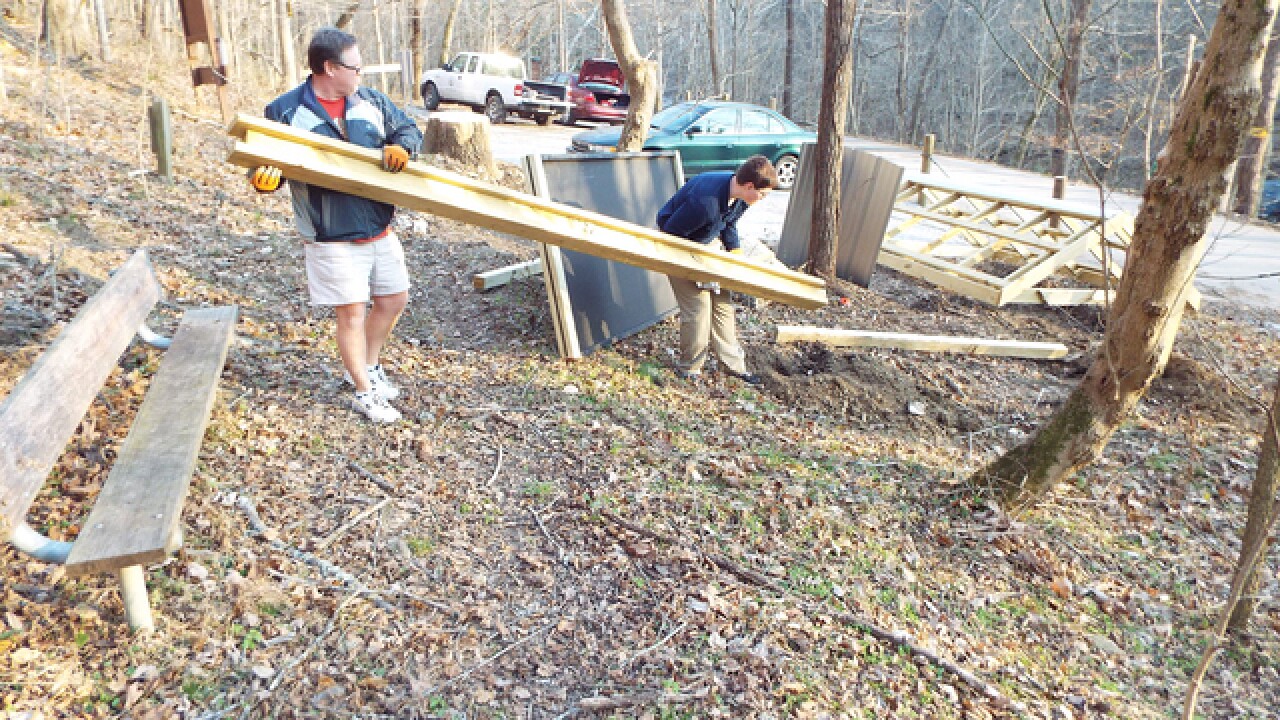 Copyright 2017 Scripps Media, Inc. All rights reserved. This material may not be published, broadcast, rewritten, or redistributed.
Kevin Eigelbach | WCPO contributor
<p>Christopher Wright (left) and his son, Dylan Wright, set up posts for a new sign and informational kiosk at Boone Cliffs Nature Preserve. It's an Eagle Scout project for Dylan Wright.</p>

BURLINGTON, Ky. -- Sometime early next year, one of the few remaining areas of Northern Kentucky that has never been plowed or cleared of trees will reopen to the public.

Concerned that the public was overusing and abusing it, Boone Fiscal Court closed Boone Cliffs Nature Preserve in September 2016. But it’s expected to reopen in January, pending a final meeting with its neighbors on Middle Creek Road, County Administrator Jeff Earlywine said.

Those neighbors, who had complained about visitors parking on the road and obstructing traffic, were a big reason the court voted to close the preserve and try to fix the problem, Earlywine said.

The other big reason was that the preserve was becoming a victim of its own success.

Visiting Boone Cliffs is a lot like taking a walk back in time, said Larry Brewer of Plum Hill Ecological Services in Covington, who did a flora and fauna inventory for fiscal court during the shutdown.

“There are very few places (in Northern Kentucky) where you can go back and see what it was like presettlement,” he said. “It’s not an old-growth forest … but they have a lot of big trees there.”

Plum Hill’s survey of the 75-acre preserve found that Boone Cliffs is “one of the most unique and diverse natural areas in the Northern Kentucky region.” The surveyors found 249 plant species, 216 of them native and some fairly rare, such as a butternut tree, a Kentucky threatened species .

They also found 10 species of fern, which they said might be more than in any other natural area in Northern Kentucky.

The reason Boone Cliffs, which lies about five miles west of Burlington off Ky. 18, was never clear-cut or significantly logged is that it’s simply too hard to access.

One trail loops through the preserve, starting and ending on Middle Creek Road. It briefly follows a clear-running spring that flows toward the road, then makes a steep rise of about 100 feet, which leads to the top of a ridge and the first of the rock outcrops that give the preserve its name. The trail then runs along the top of a ridge about a mile before it makes a steep descent along the other side of the spring to the road.

Aside from the ascent and descent of the ridge, it’s not a difficult hike, and it can be comfortably done in an hour.

Boone County purchased the preserve in 2010 from the Nature Conservancy, which had operated it in partnership with the Kentucky State Nature Preserves Commission . It was purchased with a grant from the Kentucky Heritage Land Conservation Fund , which is partly funded through sales of nature-themed license plates.

The purchase came with deed restrictions intended to preserve the property, such as no use of motorized vehicles, no horses and even no uses of mechanical equipment to maintain trails, Earlywine said.

Since then, the preserve has seen a lot of use, and overuse. Some parts of the trail had started washing out, and hikers were deviating from the main trail to make their own, Earlywine said. People were camping overnight in one of the rock outcrops that overlooks the spring.

Boone Cliffs is a preserve, not a recreational area. Visitors are supposed to hike on established trails, respect the property and leave, not stay overnight, Earlywine said.

The Plum Hill survey found another problem. On their clothes and shoes, those visitors were inadvertently bringing in the seeds of invasive plants such as bush honeysuckle, an Asian plant that’s a problem in wild areas all over the Tri-State.

To discourage overnight stays, the county has installed a post-and-cable system it can use to lock up the preserve’s parking lot at dusk. It’s also put up “No parking” signs along Middle Creek Road, which has no shoulder and is barely wide enough for two cars.

New trail markers have been put up, along with educational signs about invasive species and rare species found in the preserve. The beginning of the trail has been rerouted away from the spring to discourage erosion, and the ending has been made into switchbacks for easier descent.

This month, as part of his Eagle Scout project, Florence resident Dylan Wright is putting up a new, larger sign and informational kiosk for the preserve.

The closing of Boone Cliffs convinced fiscal court that it needed someone who could focus all his time on managing the preserve and other natural assets such as Dinsmore Woods Nature Preserve , a 105-acre preserve about a mile west of Boone Cliffs on Ky. 18.

So last fall, the county hired Victor Vanover as its first land manager. One of his goals is to encourage ownership of the preserves from residents, who could help do things like remove honeysuckle.

Preserves like Boone Cliffs are critically important to a “growing and dynamic” county like Boone, Earlywine said. “Buying property is really important, but you have to follow up with prudent planning and management,” he added.