Copyright 2017 Scripps Media, Inc. All rights reserved. This material may not be published, broadcast, rewritten, or redistributed.
WCPO
<p>WNKU studios in Highland Heights, Kentucky</p>
By: Kevin Eigelbach | WCPO Contributor
Posted at 12:00 PM, May 08, 2017

HIGHLAND HEIGHTS, Ky. -- For many in the Tri-State, the proposed sale of WNKU, the radio voice of Northern Kentucky University, means losing a familiar voice and an old friend.

But for Charlotte, North Carolina-based Bible Broadcasting Network, which has agreed to pay $1.9 million for the station, it’s literally an answer to prayer.

“We’re excited about coming to Cincinnati,” said Jason Padgett, the network’s business and operations manager. “We have honestly been praying about an opportunity there for a while. For us it’s again an opportunity to communicate the Gospel, and teach the word of God.”

As WCPO.com has reported, the university decided to sell the station because of its growing operating deficit, which was $2.6 million in 2016.

A petition urging the trustees to reconsider has collected nearly 9,000 signatures.

The sale is awaiting approval from the Federal Communications Commission, which has never turned down a proposed sale to Bible Broadcasting, Padgett said. The network could be on the air at WNKU as early as this summer, he said.

The new owner would replace WKNU’s adult contemporary format and local personalities with a mix of Bible-based teaching and Gospel music -- but not contemporary Christian music.

It would become one of at least a dozen stations that offer religious programming that can be heard in at least parts of the Tri-State. 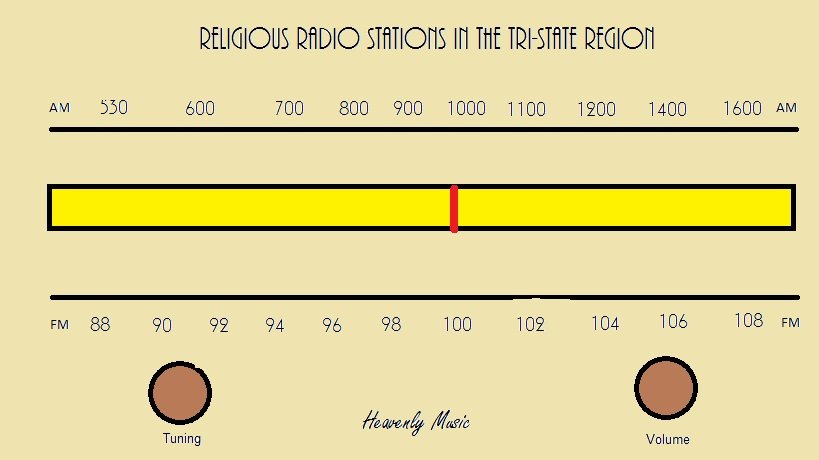 A Bible Broadcasting-owned WNKU would have the same broadcast you can hear on any of the network’s 45 full stations and 90 repeater stations in the United States. The only difference would be breaks for station identification and some announcements of local events.

The music is “traditional Christian music,” Padgett said, a blend of works by soloists, quartets, small groups and instrumentals. The teaching is nationally syndicated programs such as “Focus on the Family."

At 3:30 p.m. weekdays, you can even hear Boone County’s own Ken Ham, founder of Answers in Genesis, present its radio program, “Answers … with Ken Ham.”

You’ll hear a few women hosting shows designed for other women, Padgett said, but you won’t hear any women preaching. That’s because Bible Broadcasting follows St. Paul’s advice to the church of Corinth to not let women teach men.

“We take a literal approach to the Bible,” Padgett said.

The company’s website spells that out: God forbids any sexual activity outside marriage between men and women; Homosexuality, bestiality, incest, transgenderism and pornography are “sinful perversions of God’s gift of sex;” God “disapproves of any attempt to alter one’s gender by surgery or appearance.”

It might sound like programming designed to appeal specifically to the older generations, but Padgett says that’s not so. There are shows for children and for young families as well as senior citizens, he said.

“A lot of people pigeonhole it and say it’s geared to older audiences, but that’s not what we hear, anecdotally, from our listeners.”

It’s a format not fully represented in the Tri-State, he said, at least not on the FM dial.

It’s not possible to know which religious radio station in the Tri-State has the most listeners, because most don’t participate in the Nielsen ratings. WAKW 93.3-FM, or Star 93.3, doesn’t because it’s a nonprofit station and it costs too much, said program director Jeff Evans.

But it’s clear who has the biggest voice -- the Rocklin, California-based Educational Media Foundation, the owner of the K-LOVE and Air1 contemporary Christian music networks. K-LOVE and Air1 can each be heard locally on at least three stations.

K-LOVE and Air1 are the “Wal-Mart of contemporary Christian radio” -- the biggest players in the market nationally, said Jeff Jacobson, program director for WFCJ 93.7 FM in Miamisburg.

The Educational Media Foundation, a nonprofit, reported having $163 million in contributions for 2015, with total revenue minus expenses of $57 million.

Like the Foundation, Bible Broadcasting has an enviable balance sheet -- albeit much smaller. It reported $12.7 million in contributions in 2015, with total assets of $71 million and only $3 million in liabilities.

It keeps enough cash set aside for three years of operating costs, with some extra to enable it to buy a station or two every year, Padgett said.

Will the new station take away listeners away from any local stations?

Evans doubted Bible Broadcasting’s programming would appeal to Star 93.3’s demographic, which is adults 25-54, especially women ages 38-39. “A lot of studies have shown that most women start to really search for God, and explore faith at that age,” he said.

The new WNKU would likely have a small audience of loyal followers, Jacobson said. But such niche programming is the future, he added.

Niches like the one Sacred Heart Radio has found. It carries programming from Roman Catholic networks such as Ave Maria Radio. But its Son Rise Morning Show, produced in Norwood, is heard on more than 300 stations across the country, station manager Bill Levitt said.

Sacred Heart Radio has three stations in this market, the most recent one being WPFD 910-AM in Middletown, which it bought from WNKU about a year ago. In recent years, Catholic networks have purchased many stations across the country because many colleges and universities are getting out of the broadcasting business, Levitt said.

“WNKU actually expanded its network of stations when everyone else was getting out of it,” he said. “That turned out to be a bad decision.”