Bengals show support for Trump at rally as he talks plans, Clinton emails, but not allegations 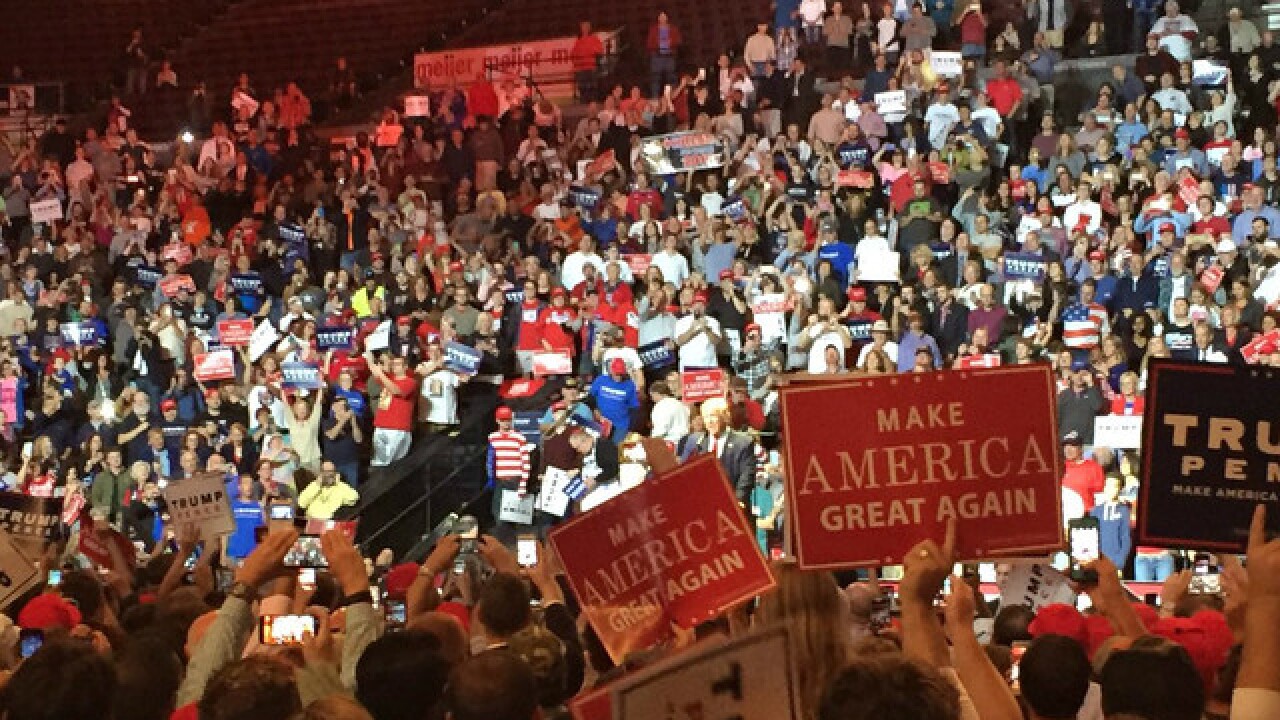 <p>Donald Trump arrives to a cheering crowd at US Bank Arena in Cincinnati Thursday evening. Photo by Amanda Seitz. </p>

CINCINNATI -- Republican presidential nominee Donald Trump came to Cincinnati Thursday -- his first official visit to the city proper -- and supporters at U.S. Bank Arena welcomed him with a crowd of roughly 18,000.

What did he have to say his loyal following, and who was there to support him?

He stayed clear of any sexual assault talk.

Trump didn’t once address a series of controversies, from his lewd talk about women in a 2005 video to new reports that surfaced Wednesday night featuring several women claiming he made unwanted advances toward them.

The issue has overshadowed his campaign during the last week, with some Republicans withdrawing their support and others condemning his statement.

But Trump didn’t even bother defending himself at Thursday’s rally, instead staying focused on attacking Hillary Clinton and talking up his plans to “make American great again.”

But some supporters alluded to it with their T-shirts

One woman behind him had a shirt that said 'Hey Trump talk dirty to me!!!'

Another supporter in the crowd that attracted some attention was one that said 'Trump can grab my ...' with an arrow.

For those who say #DonaldTrump is losing the women vote, explain this seen in #Cincinnati 2nite pic by #benjacobs @MSNBC @CNN @GMA @WCPO pic.twitter.com/ms3a5ykk2M

There was a Ken Bone look alike to lighten the evening:

Local Republicans – and some Bengals – were on his side

Despite Republicans going lukewarm -- or cold, in some cases -- on Trump, he still had some solid support Thursday in Cincinnati from GOP leaders.

And apparently support for Trump has only grown among the Cincinnati Bengals team in recent months.

Earlier this year, NFL player Tyler Eifert was spotted at a Trump rally. Triantafilou told the rally crowd that Eifert was in attendance Thursday, along with Bengals players AJ McCarron and Clint Boling.

We didn’t get the chance to ask the Bengals players what their “locker room” talk sounds like.

It’s not secret Trump has been waging an internal battle with select members of the GOP over the past few days. House Speaker Paul Ryan (R-Wis.) didn’t pull his endorsement of Trump but said he would no longer campaign for him earlier in the week.

In return, Trump chided Ryan on Twitter for his lack of support.

Yet, Trump didn’t attack “establishment” Republicans nor did he take a swipe at Kasich or Portman, both of whom are still pretty popular in Ohio.

Trump started Thursday’s event promising the crowd he would give them some policy talk.

And he did deliver, spending a good amount of time talking about his plans -- Trump style. With the guide of a teleprompter -- which Trump sometimes ditches in speeches - he stayed on talking points that tend to rally his faithful.

He hit hard on his usual mantras of punishing companies that export jobs to foreign countries, imposing tougher restrictions for immigrants and building a wall that he plans to bill Mexico for.

“Let me state this as clearly and as nicely as I can: I am going to keep radical, Islamic terrorists the hell out of our country,” Trump told a crowd that greeted his statement with cheers and applause.

It’s no surprise that some of the issues he broached were light on details and heavy on rally talking points.

“My economic agenda – we want an agenda that really is represented by what three words: jobs, jobs, jobs,” Trump said. “And people aren’t going to take our jobs and countries no longer are going to be taking our jobs.”

Other than pledging to fine companies who move jobs out of the country, Trump didn’t add new details here on how he plans to create those jobs.

He attacked Hillary Clinton. A lot.

Trump heavily peppered ruthless attacks against Clinton throughout the speech. He called her corrupt, said she should be disqualified for a run for the presidency, hit hard on some newly-hacked and embarrassing Clinton campaign staff emails and reasserted that Clinton his claim that Clinton should be thrown into jail.

Of course, too, he talked about controversy surrounding her use of email -- including the 33,000 emails Trump keeps reminding us he’d like to see -- while she Clinton was Secretary of State.

“The corruption of the Clintons knows no limits,” Trump said.

The crowd regularly responded to Trump’s digs with chants of “lock her up” throughout U.S. Bank Arena.