'The most athletic guy on our team,' Green says 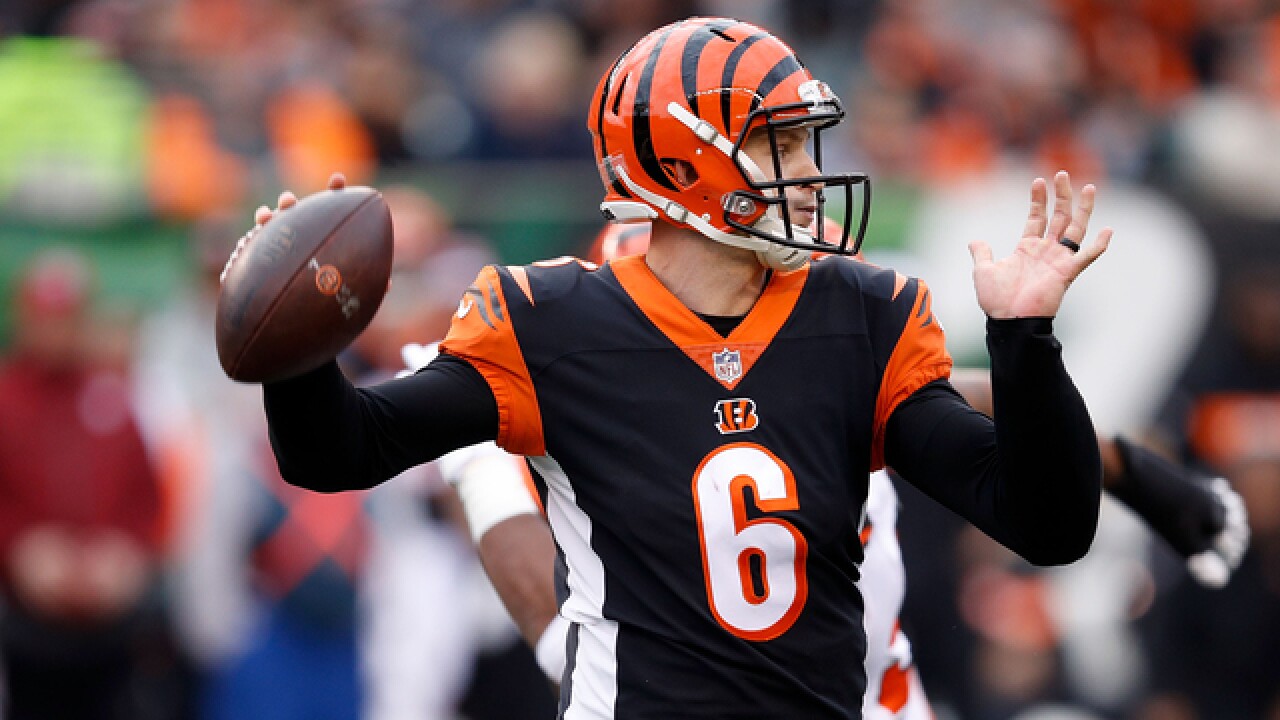 Image copyright 2018 Getty Images. All rights reserved. This material may not be published, broadcast, rewritten, or redistributed.
Joe Robbins | Getty Images
<p>Jeff Driskel of the Cincinnati Bengals throws a pass during the fourth quarter of the game against the Cleveland Browns at Paul Brown Stadium on Nov. 25, 2018 in Cincinnati, Ohio. </p>

CINCINNATI -- The Cincinnati Bengals' season now rests largely on the shoulders of a backup quarterback about to make his first NFL start.

Jeff Driskel had never even worked with the first-team offense before Wednesday, but the Bengals need him to step up as they attempt to end a three-game losing streak Sunday at home against the Denver Broncos (5-6).

The stakes of that game? Nothing less than the team's hope of making the playoffs.

Andy Dalton went on injured reserve Monday with a season-ending thumb injury, and Driskel will replace him.

Fortunately for Cincinnati, Driskel's teammates don't view him as just a backup.

"Jeff is the most athletic guy on our team," said wide receiver A.J. Green, who has been out with a toe injury but is expected to play Sunday for the first time since Week 8. "He's a guy who can play any position, has a strong arm, very smart.

"We have no doubt Jeff can play in this league. You see how athletic he is. He can create in and out of the pocket. He's really going to help us out because he has great legs. When the play is broken down, he can just get out and make things happen."

That's quite a compliment from a seven-time Pro Bowl wide receiver and former No. 4 overall draft pick.

"No question," Mixon said. "He's just a dynamic athlete. Last year, we were in indoor, and someone, I think it was Andy, threw him a pass and he caught it with one hand, and unfortunately he got hurt after that play, but he still came down with the ball. Not just no average quarterback is going to run out and go catch the ball with one hand and get hurt but still come up with the ball."

Driskel also had a chance to play professional baseball when he was drafted by the Boston Red Sox out of Oviedo High School in Florida. But he said he has always been a football player first and never regretted the decision to turn down a contract offer.

The Bengals had to see something special in Driskel to keep him as a third quarterback the past two years.

Cincinnati claimed him off waivers from San Francisco before the 2016 season and kept him behind then-backup AJ McCarron. The 49ers had drafted him in the sixth round after he threw for 4,033 yards at Louisiana Tech in 2015 after transferring from Florida, where he was expected to be the next Tim Tebow before a broken leg set him back.

Last year, Driskel broke his hand in the final preseason game and then injured his non-passing arm while playing receiver during a practice late in the season, but when McCarron won a grievance to become a free agent in the offseason, Driskel finally had his opportunity to move up on the depth chart.

Now, he's getting his big opportunity, but he's determined not to let it go to his head.

"It's just a great opportunity to go out and get a start this week and not think anything besides this week right now," Driskel said in the first press conference of his career Wednesday. "That's everybody's mindset. We have a good plan together so far. I'm looking forward to getting out on the practice field, putting the plan to work and ironing things out through the week. We're just looking forward to this week, and doing everything we can to get a win this week."

Mixon looks forward to seeing Driskel after a full week of preparation.

Driskel replaced Dalton the second series of the third quarter Sunday in a 35-20 loss to the Browns and cut a 28-point deficit in half. He threw a touchdown pass and ran one in himself and gave Cincinnati opportunities to further close the gap before a series of penalties set him back.

An illegal shift negated a 46-yard completion to Tyler Boyd on the final drive, and the Bengals failed to convert on fourth down twice while also taking five false starts in the fourth quarter.

"Obviously there's no excuse for the penalties on my end or anybody else's end, but that's something we'll get cleaned up with them hearing my cadence, hearing me in the huddle, things of that nature, but it's something we have to be better at and we're aware of that," Driskel said.

"I think I can play at this level and give our team a chance to win," he added. "I've known that all along. It's just a matter of stacking that up and doing it week in and week out."

Driskel said he prepares like he's going to play every week, so his mentality doesn't change any with his new role.

He's already a confident guy, but it will help even more that he will have the team's biggest weapon available as he takes charge of the offense with Green returning from his toe injury. The Bengals lost all three games with Green on the sideline and had two of their lowest outputs on offense during his absence.

"Any time you get your best offensive weapon back, it's good for everybody," Driskel said when asked about Green's expected return. "It opens up other people in the passing game, and he's just such a threat, I'm happy to work with him. I'll definitely be looking his way."

Bengals coach Marvin Lewis said everyone has to raise their level of play to help Driskel have success, but it's a good sign the players have so much confidence in him already.

"I think it's important, and I think that comes from being with him day-in and day-out in the building," Lewis said. "They understand how he's gone about his job and how hard he's worked. When the guys see him play-in and play-out on the practice field, they feel good about that, and that's important."